See no Karl, hear no Karl

Guess who the latest Bush administration officials stricken with amnesia are trying to protect in the U.S. attorneys scandal. 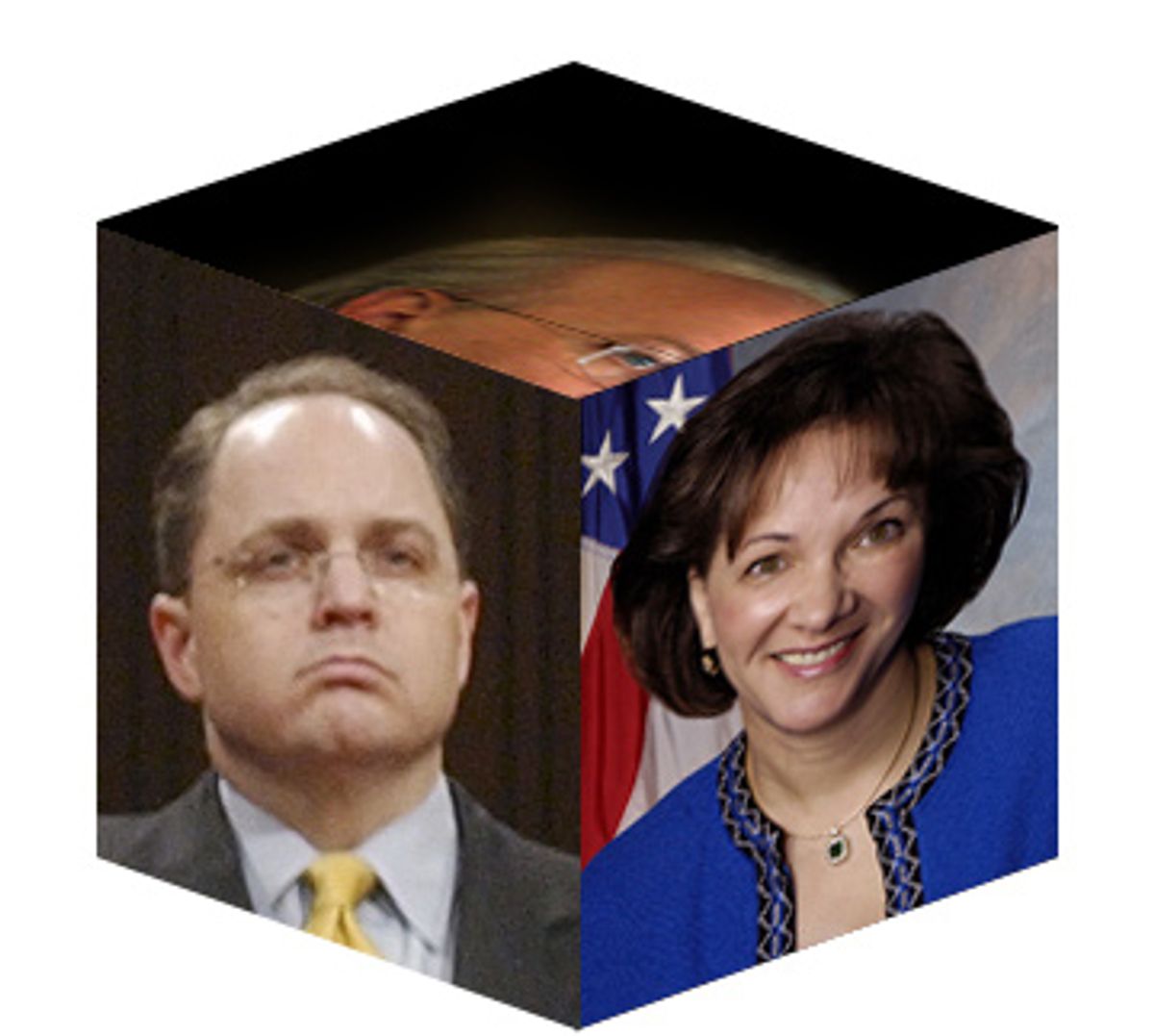 Why are high officials (and former high officials) of the Bush administration suddenly suffering from severe memory loss when they testify before Congress? On Wednesday, Lurita Doan, the chief of the General Services Administration, insisted that she "really didn't remember" much about a highly political and dubiously legal videoconference briefing at her agency last January, where a top White House operative outlined in painstaking detail exactly which House and Senate seats will be most hotly contested in the next election cycle. Then on Thursday, Kyle Sampson, the former chief of staff to Attorney General Alberto Gonzales, said again and again that he was unable to remember various events leading up to the firing of eight U.S. attorneys last year.

Taken together, the appearances of Sampson before the Senate Judiciary Committee and Doan before the House Committee on Oversight and Government Reform were, as Robert Klein once said sardonically of the Watergate hearings, a "veritable festival of recollection."

"I do not recollect this," said Doan of the elaborate national videoconference, after which she allegedly urged her agency's employees to figure out creative ways to help GOP candidates win in 2008. "I honestly and absolutely do not recollect this." Sampson must have said "I don't remember" literally dozens of times.

It seems that Republican defense attorneys give roughly the same advice to every client who shows up in a congressional hearing room, despite the conviction of White House aide Scooter Libby for lying to a grand jury about what he did and didn't remember. Almost nobody listening to Doan and Sampson believed that their memories are so pathetically dim. But then nobody is likely to turn Doan and Sampson over to prosecutors for perjury investigations, either.

Sudden selective amnesia and poor credibility aside, those two public servants had something else in common. Both Doan and Sampson appear to have participated in the partisan misuse of government resources at the behest of the White House Office of Political Affairs, which is to say, under orders from Bush political boss Karl Rove. A common thread in their testimony was the name of Scott Jennings, the White House's deputy director of political affairs.

According to Doan, and to the evidence compiled by the committee staff, Jennings had organized the January videoconference that she recalled so dimly, where he presented a series of PowerPoint slides on the "top 20" Democrats targeted by Republicans for defeat in 2008, the top 20 most vulnerable Republicans, the potential losses and gains in that year's Senate races, and so on.

Asked by committee chairman Henry Waxman, D-Calif., how she thought a Republican strategy session and pep rally -- held on federal property during work hours with federal resources -- had advanced the mission of GSA, which procures supplies and manages property for the government, Doan offered an evasive but revealing answer. That exercise was, she said, part of a continuing effort at "team building." Plainly she was a committed member of Rove's team, even if she honestly can't remember any details of that particular team-building moment -- especially if she can't remember any details.

As for Sampson, today's headline is that his testimony repeatedly contradicted his former boss Gonzales, who has claimed not to have been involved in the purge of U.S. attorneys. Oddly enough, the involvement of Gonzales was practically the only thing that Sampson could remember clearly about the entire process. Among the things he could not remember, however, was Rove's role in the firings, notably the removal of H.E. "Bud" Cummins as U.S. attorney in Little Rock, Ark., to make room for Rove's former opposition research aide Timothy Griffin. The effort to whitewash this aspect of the scandal has scarcely been subtle, and it now includes Sampson's ridiculous testimony.

He tried to brush off his telltale e-mail on this topic, which shows he knew that Griffin's appointment was "important to [then White House counsel Harriet [Miers], Karl, etc." by claiming that this had merely been his "assumption."

"I don't remember ever having talked to Mr. Rove about it," said Sampson. That assumption had arisen from conversations with someone else: "Scott Jennings" -- that name again -- "had expressed interest in promoting Tim Griffin." In other words, Sampson claimed, he had simply dropped the names of Rove and Miers on his own initiative.

Looking at this buttoned-down operative of the famously buttoned-down, tight-sphinctered Bush political machine, why would anybody believe that? These guys don't freelance, and they don't take Karl's name in vain.

Far more probable is that somewhere high above his pay grade, the same imperative that doomed Scooter Libby is now about to claim Fredo Gonzales. That precious flower, the turd blossom, must be protected above all.