I used to be in love with Dan Savage 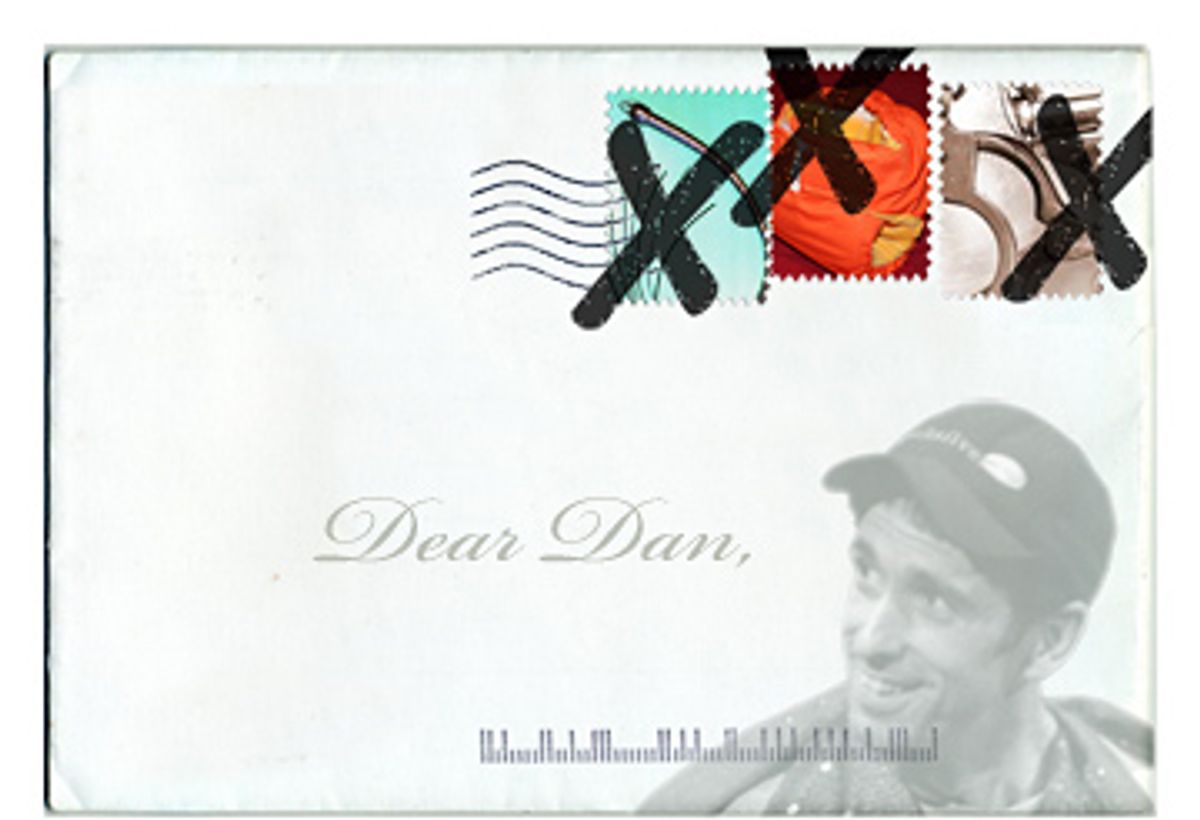 This is perhaps the hardest letter I've ever had to write. I've started it again and again but I know now that I'll never get it right, so just let me stumble my way through, OK? Please don't make this any harder than it has to be.

Your Savage Love sex advice column not only made me a better lover but a better person. You introduced me to people, places and things I would have never otherwise been aware of. You were my secret gay crush for five years. Or you used to be. But, sadly, this is both a fan letter and a Dear John, Dear Dan. It's over and it's better this way. You'll see. No, please, Dan -- it's not you. It's me. But I'm hoping we can still be friends.

When I discovered you, Dan Savage -- wonderful sexpert, faggot you -- I couldn't believe the new worlds you opened up for me and how blinkered a supposedly sex-positive feminist like myself truly was. In my GI days in the '80s Third World, I was proud of myself for overcoming my Southern Baptist brimstone against prostitutes once I understood the world those women lived in while I marched about in my shiny uniform making more monthly than they did annually. I ended up with bargirl girlfriends and shamed my whore-mongering male co-workers into treating them well. That led me, during law school, to work for sex workers' rights. How open-minded, how transgressive I thought myself even as a bottle of wine and a mix tape were the only accessories I ever encountered in the bedroom.

Since we supplicants make the pilgrimage to your site to admit that which can be admitted nowhere else, here's my confession: At first, I read your column the way we "decent" folk rubberneck a perp walk -- so we can tut-tut and get our disapproval on. But my Church Lady prurient, "I have no part in this" sniffiness slowly gave way to a raised consciousness of all things sexual. This may be the column that made me realize that for all the schtupping I had so proudly done, I still had a lot to learn:

Dan, that's when I realized you weren't just enabling my voyeurism; you were dropping knowledge! I had subconsciously assumed a) that a sex advice columnist couldn't be very deep and that b) fetishists were just natural-born freaks to run from at first sight of those assless chaps and that growling Dustbuster; cerebral me had never thought to wonder where fetishes came from or that most were, however strange, neither harmful nor illegal, in any event. I read you and flipped through my photo album wondering which old lover had secretly lain next to my snoring bod after a thorough, vanilla pounding, and wished he had the nerve to wake me up and order him to mop my floors with his tongue.

No doubt the fetishes you discuss have long been understood, but what a service to have that knowledge broadcast to a general public. And bravo for the top-flight medical expertise you marshal to advise us all on the risks of practices like "water sports," bestiality and all things poop related. That was when I first thought of writing about you. Working title: That Pervert Dan Savage Is Good for America. Other sex advice columnists turned me off with their faux fey girliness ("you know what happened next") or their exhibitionism, all but posting their pap smears online. But not you, you're all business about pleasure, just what a nation so obsessed but so repressed about sex needs.

Dan, you were that lover who turns a virgin out, turns her on, "makes" her do naughty things that go completely against her "nature" and produces a bedroom superstar who looks for all the world like a librarian. You're the middle-aged housewife who breaks in the lawn boy. (One of the reasons I love you is for your dictum that older lovers should treat their legally aged younger ones like camp sites -- left better than when found.) You are a sexual Solomon reigning over a moral universe that's downright old testament. But.

Alas, maybe it was never meant to be between a middle-aged straight black chick from the Bible Belt and a raging 'mo with no boundaries. I was with you through your calm instructions to the chick who wanted her pubic hairs plucked with tweezers. The politics of boinking your pets -- read every word. But finally, a column from a few weeks ago made my sexual pendulum swing back past the point of equilibrium to a decidedly prudish angle. As I began dating again and anticipating a new, savage lease on sex, the parade of fetishes began to seem like plain old dysfunction to this straight arrow. You didn't change, Dan. I did. And it was this column that was the final straw, the one that made me dread what was in store for me as I worked on my Match.com profile and looked for porn hiding places my kids wouldn't find:

My husband ... is a diaper-loving, transvestite adult baby ... while I'm not into his kink, I'm not against it. I've bought him diapers ... I've set aside a room in our house to be his "nursery," one weekend a month he gets to be his little-girl self all weekend, and I peg him because he likes to feel submissive and dirty. He knows that I worry -- as someone who works with children -- that it could get out and ruin my career ... lately our vanilla sex life is suffering ... he always wants to come in his diapers [OR] he lies there like a lump. Now he's decided that he doesn't want to have sex unless it's playtime ... I've tried everything I can think of, even compromising the "my turn" rule by letting him whine and cry and pretend to be a baby during my turn. I'm tired of my baby girl; I want my husband back.

You trained me well, Dan. I know I should applaud my fellow savage for being so GGG (good, giving and game), but I don't. I think she should have headed for the hills at the first mention of Depends. I know I shouldn't think it. But the fact is that I do. Now, instead of regretting what I missed out on sexually, I'm terrified of what I might learn if I give the least hint of a sexual openness. Now it's me who's on the down low, repressing my sexual fantasies for fear of what his might be. I'm the hall monitor geek in the coming-of-age movie who cuts physics for an orgy only to wake up with a persistent itch, a stalker and a big, fat secret to keep buried deep inside. I simply do not want to know what bland Dave in accounting keeps in his spare room.

It took a gay activist to convert me to don't ask, don't tell, and regretfully, I'm going to have to DTMFA. Hard as I tried, it turns out that I'm not so good, not very giving and definitely gone. I'm not dumping the column -- can't live without it. But I'll be reading as a peeping Tom, not an acolyte.

Who was I kidding? I'm no wild child.

Signed,
Repressed and proud of it