By seizing 15 British sailors, the embattled Iranians aim to rally anti-Western sentiment and force the Brits from Iraq. 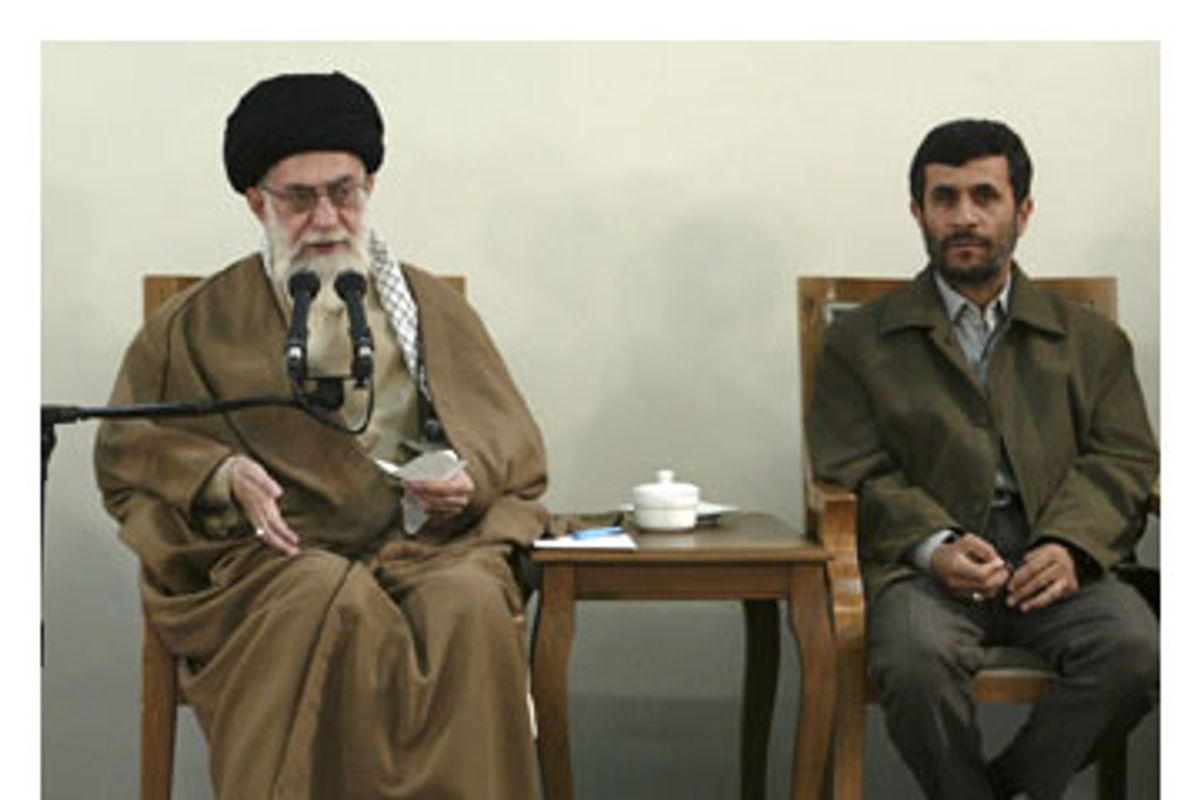 The lofty invocations of international law by the British and Iranian governments disguise the banal origins of their current dispute: used cars. The British naval personnel had boarded an Indian vessel they thought was smuggling old automobiles into Iraq. Tehran maintains that they then veered into Iranian waters.

It is not really about used cars, of course, but rather an unpopular and isolated Iranian government attempting to rally support and strengthen itself. The capture by Iranian Revolutionary Guards of 15 British sailors and marines on March 23 has set off a diplomatic crisis and mobilized the public in both Britain and Iran. The ever combative Iranian President Mahmoud Ahmadinejad declared Saturday "that instead of apologizing to the Iranian nation, the British were acting as if Iran owed them something." A member of the Parliament in Tehran called for the British personnel to be tried for espionage, while the Iranian Embassy in Thailand asked other nations to denounce what it called a British trespass into its sovereign territory. On Sunday, a small crowd of some 200 demonstrators threw stones and firecrackers at the British Embassy in Tehran. It was not much of a demonstration, and Iranian police kept them in check when they tried to storm onto the embassy grounds.

British public opinion was inflamed on Sunday after Iranian television showed the captured seamen admitting that they had strayed into Iranian waters at the mouth of the Shatt al-Arab waterway, which forms the disputed border between Iran and Iraq. Iran seemed to be vying with 1950s North Korea for the title of creepiest brain-washer. Former 1st Sea Lord Adm. Sir Alan West decried the performance of the sailors as a product of coercion and sniffed that it "does not reflect the price of fish."

Although Britain insists that a global positioning signal demonstrates that the British boat was in Iraqi waters, in fact the maritime border between Iraq and Iran has never been agreed upon by the two neighbors. Military action seems an unlikely way to secure the release of the soldiers, and Tony Blair's government has given up threats of moving into a "different phase" and has focused on intensive negotiations. "We are anxious that this matter be resolved as quickly as possible and that it be resolved by diplomatic means, and we are bending every single effort to that," British Secretary of Defense Des Browne said on Sunday. "We are in direct bilateral communication with the Iranians."

Britain, an advanced technological society, has the world's second-most-powerful military, and a GNP per capita of $33,000. Iran is still a developing country, with a per capita income of only $2,800, despite its oil wealth. Why would the Iranian leadership risk such a confrontation over a minor issue? Even if the British boat had strayed into Iranian waters, it could not have been by much, and nations routinely grant such passage to nonbelligerent vessels. The conflict is not about incursions into sovereign territory any more than it is about used-car smuggling.

With Iran facing huge challenges at home (an economy in tatters) and abroad (mounting pressure over its nuclear program), Ahmadinejad and his reluctant patron, the Supreme Jurisprudent Ali Khamenei, desperately needed a diversion. The capture of the British personnel by the Revolutionary Guards may have been opportunistic, but Tehran's hard-liners think they know how to play it. They are trying to use the incident to rally the public around the flag and revive their flagging fortunes on the geopolitical stage with appeals to Iranian patriotism. They also see tactical advantages in the hostage taking that might help weaken the British and push back against the Americans in Iraq.

The regime of Khamenei is in fact deeply unpopular in Iran, especially among youth and women (who together make up the vast majority of the population). These groups had helped to elect the reformist president Mohammad Khatami, who received 70 percent of the vote and served from 1997 to 2005, and who worked for a loosening of puritanical restrictions on personal freedom. His "Second of Khordad" movement, named for the date of his electoral victory, took over the elected Parliament and pushed for a relaxation of press censorship. Fewer than 20 percent of Iranians voted for conservatives in that period. Alarmed, Khamenei and his allies in the theocratic part of the Iranian government rallied to crush the reform movement, an endeavor in which they largely succeeded. They closed down liberal newspapers and forbade liberals to run for office.

While Khatami had won by a landslide in elections with high turnout, his successor, Ahmadinejad, barely got into office in 2005, after a lackluster campaign for which there was little popular enthusiasm. Ahmadinejad and his parliamentary allies won only because Khamenei had excluded the more attractive candidates. Ahmadinejad had campaigned on a populist platform of economic reform in a society where most people struggle to get by while fat-cat mullahs and well-connected businessmen from the bazaar control billions. In reality, he has made the lot of most Iranians worse, a fact that has not escaped them. In the wake of serial budget deficits, the country has faced a sharp rise in inflation and unemployment.

Abroad, Iran was humiliated by American raids on intelligence agents in Iraq. The United States still holds five Iranian officials, captured in Irbil, to the outrage of the Iranian public and the helplessness of the government in Tehran.

Ahmadinejad's alienation of potential Iranian supporters such as Russia and China with his regular undignified rants against Israel and the West has cost Iran dearly at the United Nations Security Council, which has voted for a series of potentially serious economic sanctions in response to Tehran's attempts to enrich uranium for nuclear energy. Iranians, who saw how oil-rich Iraq was reduced to a fourth-world country by U.N. sanctions in the 1990s, are anxious about their own fate.

Ahmadinejad's domestic and foreign policy failures have emboldened his enemies, especially Akbar Hashemi Rafsanjani, the former president (1989-1997) who now heads the clerical "senate" called the Expediency Council. Rafsanjani has taken to openly denouncing Ahmadinejad's policies. Even the president's own right-wing supporters are threatening to vote down his budget, which contains another 20 percent increase in public spending.

A lot of Iranians could not care less about Khomeini's clerical ideology at this point, but most are still intensely nationalistic. Given all the student protests against hard-line policies in recent times, it must be sweet indeed for the ayatollahs and Ahmadinejad to see universities become the sites of anti-British denunciations.

Abroad, Iranian diplomats are also clearly attempting to rally to their side other countries who feel pushed around by Western powers, thereby increasing Iran's global standing. In that regard, Tehran is attempting to revive the popularity it enjoyed in the Arab and Muslim worlds during the Israel-Lebanon War of 2006, when Iran helped the beleaguered Hezbollah stand up to a much stronger Israel.

From the mullahs' point of view, Britain offers some advantages as an adversary. It has had a long history of interventions in Iran, which are still resented by the more nationalistic Iranians, who harbor a good deal of paranoia and conspiracy theories. Britain connived with the United States in the overthrow of the elected government of Mohammad Mosaddegh in 1953, after Mosaddegh had nationalized Iranian petroleum. More recently, many Iranians blamed British intelligence for last year's unrest and bombings in Baluchistan province, a non-Persian Sunni area.

Britain's government is vulnerable in the region. It has already reduced troop strength at Basra in the south of Iraq, and the British public's patience with the deployment has waned. Surrounded by Iraqi Shiites, many of them pro-Iranian, the remaining contingent of British troops in Iraq might well face large and possibly deadly public protests if the British were to attack Iran. In essence, the small British garrison in Basra is itself hostage to Iran's latest political gambit, and it is therefore unlikely that Tony Blair will resort to military action.

Iran aspires to exercise political influence in Basra, and various sorts of smuggling underlie some of its clout in that city. In particular, the Iranians are likely giving aid and arms to the Supreme Council for Islamic Revolution in Iraq (SCIRI), the fundamentalist party that controls 20 of 41 seats on the Basra provincial council. Its paramilitary Badr corps has been locked in a struggle for control of oil smuggling and police power in the city. With border and naval patrols, the British are attempting to reduce the volume of the black market economy before they leave the port city. If they were to succeed, they would likely stop Iranian smugglers -- including those linked to the intelligence services and the ayatollahs -- and thus harm SCIRI's prospects of taking over. Thus, Tehran struck directly at a British anti-smuggling patrol by seizing the British sailors. Holding them captive might also give Iran a bargaining chip in freeing the five Iranian captives taken by the Americans in Irbil, despite the bluster of Blair's close allies in Washington.

Ultimately, Britain's diplomatic approach is more likely to bear fruit than the saber rattling of George W. Bush. German Chancellor Angela Merkel is so diplomatically tone deaf that she chose Israel as the site from which to issue her statement that Britain has the "full solidarity" of the European Union, adding, "We demand the immediate release of the 15 British soldiers." But British conservatives complained that Merkel's press release was about all the help they were likely to get from Europe, given that France, Germany, Italy and others are seeking to expand trade ties with Iran.

The mild demand of Iranian Foreign Minister Manouchehr Mottaki on Sunday, for a simple softening of the British tone and some sort of pro forma apology, suggests that the Iranian side is hardly intransigent. British Defense Minister Browne's own comments on the importance of bilateral diplomacy are also promising for a peaceful and timely end to the crisis.

In the meantime, the incident could hasten the departure of the rest of the British troops from Basra. If a great power cannot so much as avoid having its military personnel kidnapped in a region where it has a major garrison, that is a sign that it is overextended and must either commit more forces or leave. But it remains unclear whether Ahmadinejad and Khamenei will have gotten their bump in the polls and burnished their nationalist credentials. They are so unpopular that it seems unlikely they will gain much political traction inside Iran from this escapade.