In "House," impossibly gorgeous physicians miraculously diagnose rare diseases in every episode. Where I work as a nurse, in the Ordinary Hospital, sometimes there's not even a doctor in the house. 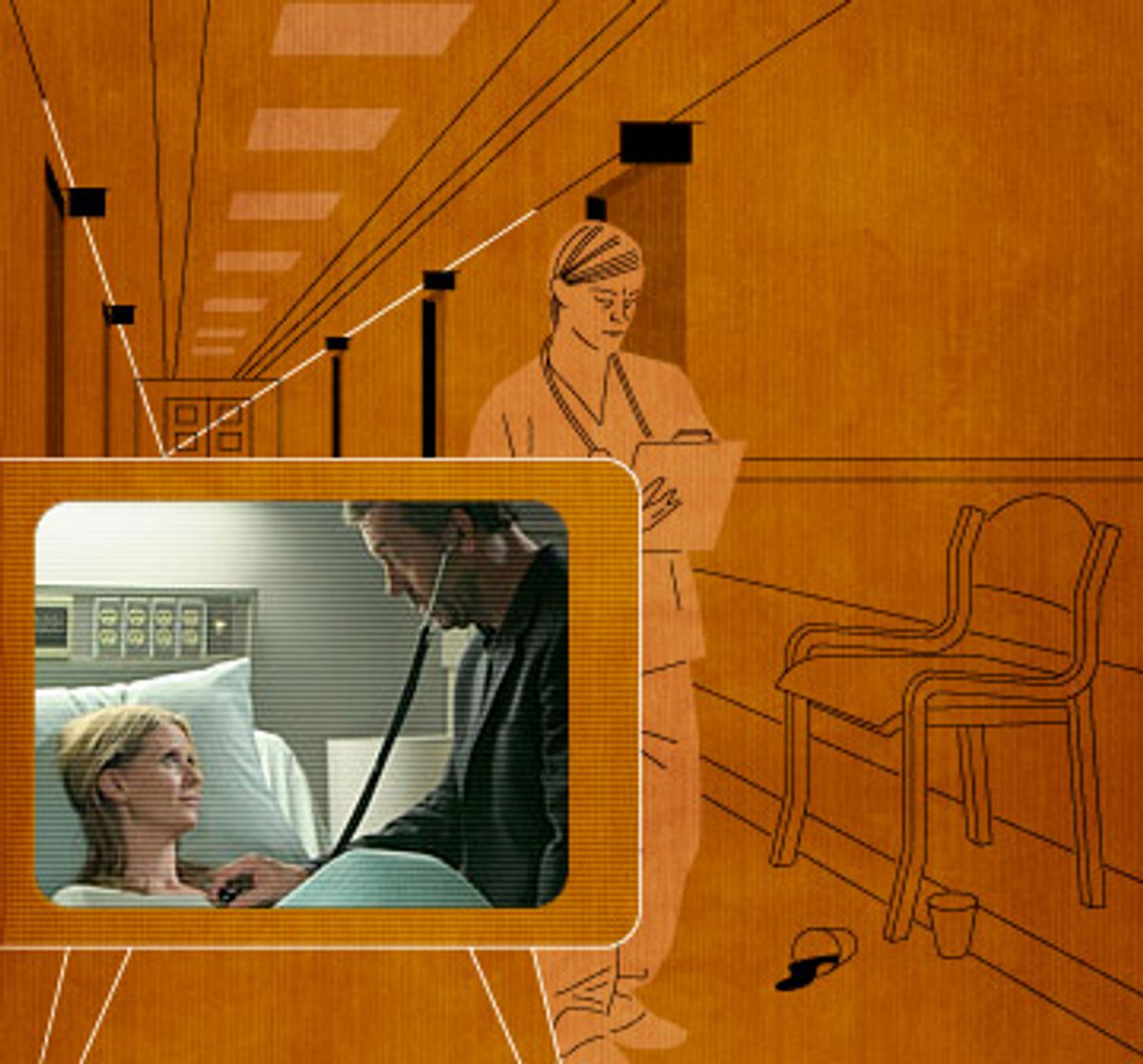 Like a lot of people who work in healthcare -- I'm a nurse -- I started watching "House" because of the mysterious diseases involved. Everyone loves a rare disease. And I was perversely charmed by the title character's nastiness. House says the kind of things I sometimes want to say -- mostly, to doctors. (Dr. Weber: "I know I know you." House: "Sure you do, Dick." Weber: "The name's Phillip." House: "Oh, my bad. Something to do with your face. I always think your name is Dick.") I kept watching in spite of his flamingly litigious behavior: He calls one patient "Mrs. Nympho" and says of a Chinese woman, "Not the sharpest chopstick in the drawer, is she?" I watched for a whole season, in spite of knowing that the crude passes, Internet porn and Vicodin addiction meant that any doctor like him would be both bankrupt and imprisoned.

But I'm frustrated now. I call "House's" world the Beautiful Hospital. There are the wide, bright hallways, miles of floor-to-ceiling glass, and the many private, luxurious patient rooms (none of which appear to belong inside the hulking brick institution seen in the bird's-eye credits). Mostly it is a Beautiful Hospital because it is staffed almost entirely by a trio of gorgeous and impossibly brilliant physicians. No one else works at the Beautiful Hospital except a few secondary gorgeous and brilliant doctors and an ever-changing cast of extras whose only job is walking down the hallways in scrubs.

By my incomplete count, the three handsome doctors who work under House -- Cameron, Chase and Foreman -- all sadly lacking a sense of humor, are educated in the entire gamut of medical specialties, from brain surgery to dermatology to obstetrics. Their patients have diseases like adrenoleukodystrophy, cervical spondylosis and Miller-Fisher syndrome; a surprising number wind up getting experimental surgeries, organ transplants and drugs not on the FDA-approved list. (On "House," the correct diagnosis always follows a lot of wrong ones and the patient's near death at the hands of the brilliant diagnosticians.)

I'm surprised they don't fix the air conditioning as well, but I guess they have to delegate something.

Last week, I worked an evening shift at the hospital. I had four patients under my care in the oncology unit where I have worked for several years. One, struggling with a tumor in his liver, merely had the problems of pain control and nausea with which I am intimately familiar. Another was a woman in her 70s dying of kidney failure. (Many of the hospital's dying patients are transferred to our unit for their last days.) A man in his 40s had severe abdominal pain of unknown origin and was going through tests. An elderly man was slowly recovering from the severe side effects of the treatment of his renal cell cancer.

Ours is not a Beautiful Hospital. We can call it the Ordinary Hospital, at least in accommodations. Two of the patients shared a room, which meant sharing the sounds and smells of vomiting and pain. There are no walls of glass here. The rooms are small and rather cramped, and the thermostats don't work all that well. My pager tends to go off at awkward moments. There are no private offices for conferences with family members, who sometimes weep in the hallways. We are short on impossibly good-looking and inhumanly skilled diagnosticians.

I was helping the man with the liver tumor to vomit when one of the respiratory therapists came in and told me the man with renal cancer had a fast, irregular heartbeat. I looked him over and then called the doctor, who that night was in fact a nurse practitioner. Another nurse looked up his records for me. We decided to watch him closely, and when his heart was still flailing away a half-hour later, I ordered an EKG, which was done by the same respiratory therapist who'd first noticed the problem. More phone calls, more consultation, and then I had new medication orders for the pharmacist and a long report for the next nurse.

Several of us were involved. None were doctors.

I compare "House" to "ER," another drama I used to watch regularly. "ER" is the Ugly Hospital. There are actually nurses working there, as well as orderlies, secretaries and janitors. Some of the staff are even obese and bald and pockmarked, just like the rest of us. There is a high rate of drug abuse and suicide attempts among the staff, perhaps due to the epidemic of promiscuous partner-swapping. (The staff on "ER" have always had a disturbing tendency to be distracted by their sex lives during livesaving procedures -- "Lidocaine, stat! And where did you get that hickey?")

I was fond of the helicopter-blade amputation; I liked Kerry's malleable limp, and George Clooney can get excited about my kid's cold anytime. But I got tired of the whining ("I can't believe you kissed her! Lidocaine, stat!") and the ceaseless parade of crazy, violent, manic, weeping, infectious, tragic and critically ill people coming through the doors. Most emergency rooms don't have quite the same traffic. Over time the janitors and secretaries have faded out and a lot of the nurses seem to have quit, and the ones left have gotten suspiciously thin and blond. And even though it is definitely the Ugly Hospital, none of the doctors is obese or pockmarked.

I fondly remember "St. Elsewhere," one of the first television shows I ever watched regularly. It was inevitably focused on the doctors, but they were ordinary-looking people, not very charming and definitely not brilliant, and they tended to freak out if the nurses weren't there to save their asses half the time. Some of the nurses were really bitchy, too, and a few were downright brilliant.

Too bad it all turned out to be a dream.

Last Friday night, my patient with abdominal pain kept getting worse. The X-ray technician trying to get a study of his bowel called me down from the 5th floor to the basement twice. I finally called the hospitalist -- a real hospital-based doctor, kind of a Pretty Doctor but not quite a superhero -- who told me to call the general surgeon, who was at that time in surgery and to whom I relayed a message by way of one of the surgical nurses. The surgeon showed up an hour later, breezily told the patient he wanted to "open him up and see what's going on," and left. With the help of two other nurses, I got him ready for surgery in an hour. As he was being wheeled out by the transport orderly, the Pretty Doctor appeared to say good luck.

No brilliant diagnoses. Not even a good guess.

During all this -- which was not, in fact, an unusual shift; oncology patients are by definition unstable and the ones in the hospital tend to be quite sick -- three other nurses were caring for their own patients, all needy in completely different ways. A fourth nurse was filling in as our aide, helping with vital signs and blood sugars. A secretary answered the phone, directed visitors, put in computer orders and managed the charts. Transporters came and went. The IV therapy nurse appeared to help with a stubborn line. The physical therapy assistants exercised with a few people. A pharmacist prepared chemotherapy and dealt with the nurses' constant requests. A housekeeper hurried to clean the rooms left by two discharged patients, to make way for the next admission.

Meanwhile, the woman in Room 21 had sunk into unconsciousness. Her breathing was ragged and her legs swollen with fluid. I was in and out of the room frequently, turning her, checking the morphine drip, and mostly checking in with the husband, son and daughter, who kept a continual vigil by the bed. The chaplain visited for a while. Another nurse helped me position her and get her cleaned up once.

I dashed into the IV room, and the pharmacist told me a joke.

"There was this fisherman and he was up in Alaska, trolling for halibut, and here comes a wave and over he goes. Next thing he knows, he's in heaven. Man, everything is great! There's a big cafeteria and the buffet line has all of his favorite foods. So he's moving along with his tray when this guy in a white coat shoves him aside and cuts in.

The real message of medical shows is that brilliance goes hand in hand with emotional retardation. While this may be a debatable point, it has little to do with medicine as it is usually practiced. Most of the physicians I know are easy to work with -- oncologists, by default, tend to be at ease with teamwork. They are collaborative and respectful and although a few are quite handsome, they fall short of model status. (Wilson, House's oncologist friend, is played by Robert Sean Leonard. If only.) My biggest objection to medical shows is not that the doctors on television do their jobs brilliantly, but that they do everyone else's jobs, too. And my objection to doctors in the real world is a little like that. I sometimes wonder just how much doctors know about what goes on over the course of a day in their patients' difficult lives -- how many people are involved, how much we need each other.

I guess a lot of people are watching "Grey's Anatomy" now. Maybe I'm burned out, but another soap opera about surgeons just doesn't grab my attention. You have the gorgeousness, the sexy nurse, people bursting in on critical procedures ("How could you stand me up like that?" "Lidocaine, stat!"), the pop song ending over scenes of each stunted character staring out a window -- it just doesn't seem new at all.

The medical show I really like is "Scrubs." It's full of chaos, anger and fear, and no particular brilliance at all. Just struggle and good intentions and richly imagined fantasies of lust and revenge. Like my world.

I still watch "House" -- sometimes with a little amusement, a lot of frustration at others. Of course, we're supposed to understand that Dr. House is a lonely, bitter man with chronic pain and intimacy issues and blah, blah, blah. At the Not-So-Ordinary Hospital, I engage in an extraordinary task with the help of a lot of extraordinary people who never get to be the central characters in television shows. "Ray Power -- X-Ray Tech"? "Cases From the Central Venous Catheter Lab"? I don't think so -- not many rare diseases. "Chaplain Jones"? I can only wish.

Those are some great stories, but they aren't going to make it into a 50-minute show.

Sallie Tisdale's most recent book is "Women of the Way: Discovering 2500 Years of Buddhist Wisdom" (Harper San Francisco, 2006). She contributes to magazines such as Harper's, Tricycle, and Antioch Review.