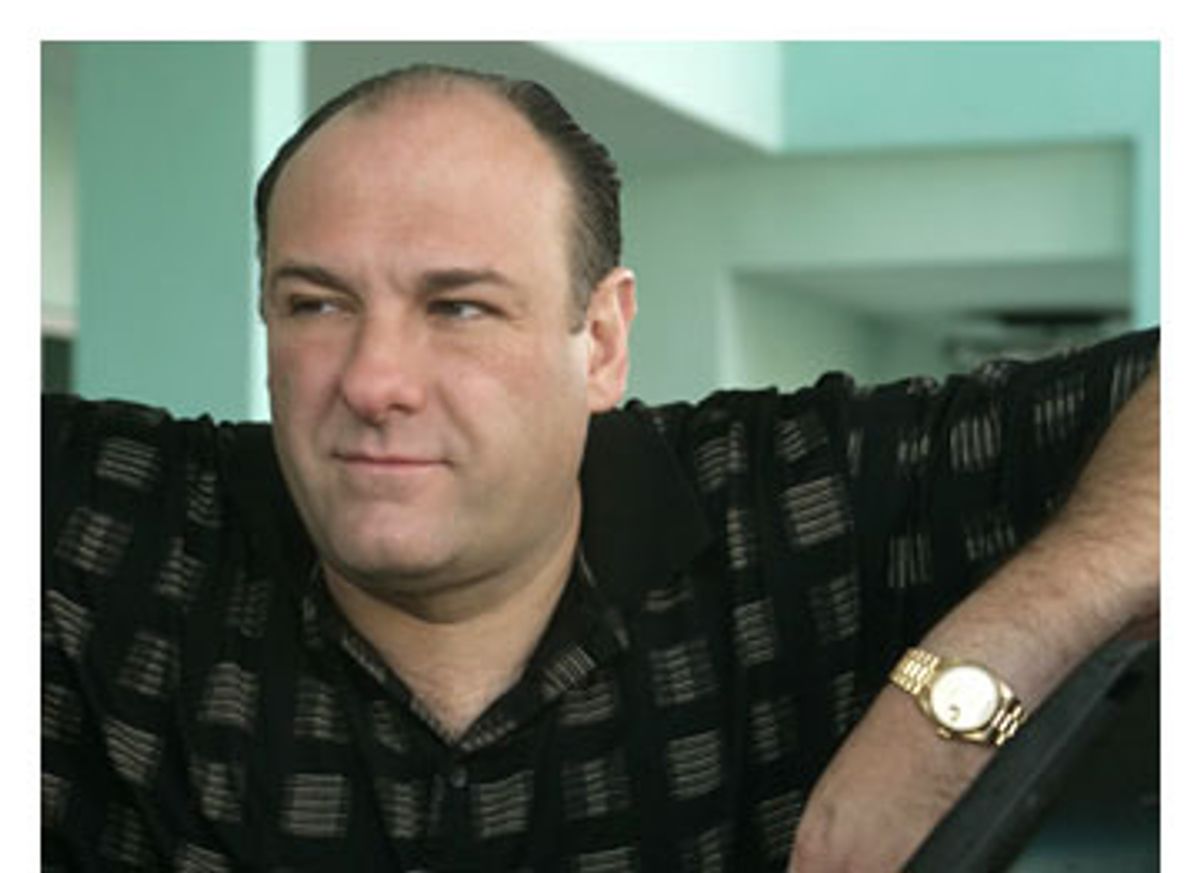 "All those memories are for what? All I am to him is some asshole bully." -- Tony Soprano

As the curtain rises on the final season of HBO's "The Sopranos," Tony is considering his legacy more than ever before, even more than he did after his brush with death. He's wondering not just how he's seen by Christopher, who portrays him as an aggressive thug in his new mob-horror movie, but how his other associates and his wife and kids see him. How will he be remembered? What will he leave behind? With all of the unrealistic expectations we each have of our lives, the big goals we want to accomplish, the hopes we have for those we love, how can we not be a little disappointed in the end?

The same questions apply as we near the end of this epic mob drama, a TV series that redefined our understanding of the Italian mob and explored the fragile nature of family -- the kind we have with blood relatives, and the business relationships that are sometimes just as intimate and as complicated. Expectations were enormous at the start of the first half of this final season. A two-year hiatus didn't help, of course, nor did the fact that television dramas in general were improving, following in the path cleared by "The Sopranos" itself, which brought a smart, imaginative, dark sensibility to the small screen and broadened people's perspectives on what a drama could be. The show set the bar so high that the low stakes of Vito's disappearance and Christopher's falling on and off the wagon felt downright anticlimactic after such a long wait.

What could we do? We expected a lot. For eight years now, Tony Soprano has been so much more to us than "some asshole bully." He's been this big, bearish patriarchal figure with a soft, vulnerable center, an angry, violent man who also loves little ducklings and frets over doing right by his men. We've watched Tony growl and sigh and snicker and gorge himself and quarrel and get drunk and tell bad jokes and become depressed. We've watched him lust after women and order hits on old friends. After years of seeing this man glower and chuckle and mope, he's become such an archetype, such a larger-than-life fixture, that it's hard to imagine him suddenly disappearing. More than anything else, Tony has captured our sympathies over the years. He may hang out with self-serving thugs and aggressive, one-trick ponies, his wife may be self-righteous and hypocritical, his son may be a shortsighted, shallow dummy, his daughter may be wishy-washy and overly dependent, but Tony, even at his most merciless, dodges our harshest judgments. We forgive him for his countless crimes and mistakes, for his recklessness and his rage. The man is full of sadness and longing and we can't turn away from him, no matter how depraved or unfair he becomes.

As the first of nine final episodes opens, we find that Tony (James Gandolfini) may not be looking back as fondly as we are. Most memories aren't welcome for him. When he and Carmela (Edie Falco) join Bobby (Steven R. Schirripa) and Janice (Aida Turturro) and their daughter Nica at Bobby's lake house to celebrate Tony's 47th birthday, Tony seems relatively calm and happy, but there's a feeling of dread hanging over the man. While the other three adults laugh and bring up old times, Tony glares out onto the lake. He doesn't want to talk about Bobby's father, because it reminds him of his own dad. He doesn't want to talk about the house at the shore that he and Carmela almost bought, because it reminds him that they almost got divorced, or it reminds him of old friends he's dumped into the waves -- the past is so littered with emotional potholes and tragic turns, it's hard to tell which one he's avoiding. He doesn't want Janice to tell crazy anecdotes about his dad "because it makes us look like a fucking dysfunctional family" -- as if anyone is under the illusion that they aren't dysfunctional. And when Janice gives Tony a DVD of home movies of their childhood, he struggles to act grateful, but you can see an uneasy look spread over his face. His childhood is the last thing in the world he wants to think about; it feels dangerous to even consider it, particularly when he's been drinking.

"I'm old, Carm. And my body has suffered a trauma that it will probably never fully recover from," Tony later says to his wife, but it's hard to tell if he's talking about his gunshot wound or the burden of so many gloomy recollections and regrets he carries with him. While it might seem odd that the final episodes would begin with a trip to the lake, for a man who works hard to distract himself from the heaviness of his past and the weight of his mistakes, vacations can be more harrowing than day-to-day life.

Meanwhile, Carmela is up to her usual tricks, battling to keep things on an even keel, busying herself with her real estate work, turning a blind eye to Tony's doubts and dark moods, and putting on a happy face. When Tony indulges in some bad behavior, Carmela is the first to scold him, but she's not about to admit his most troubling flaws to the outside world, least of all to someone as untrustworthy as his sister. "Tony is not a vindictive man," Carmela tells her, willfully ignoring the past 20-odd years with the man. The doubting, wishy-washy Carmela of the first few seasons is gone; buoyed by a streak of warmth and relative peace in her marriage, she's determined to convince herself of her husband's solid character. Even so, we see hints in the second episode that she continues to be plagued by Adriana's death, suggesting that this murder, which Tony and Christopher and the rest of the men have clearly put behind them, could prove devastating to Carmela if she discovers the truth.

For the moment, the family is united in support of their patriarch. Even Meadow (Jamie-Lynn Sigler), the only vaguely ethical family member and the one who's always been skeptical of Tony's behavior, has taken her place at her father's side as one of his fiercest defenders. As it was last season, it's unclear where Meadow is headed or what exactly she wants from her life, but we can see that she's closer to the fold than ever, as is A.J. (Robert Iler), who looms around the Soprano residence with his wife and kid, looking like a teenager playing house. In contrast, Christopher (Michael Imperioli), who's always seemed like more of a son to Tony than A.J., is lost in his Hollywood fantasy, putting the final touches on his movie, which looks just awful enough to become a huge hit. In a few artful scenes, we're shown Tony's ambivalence toward Christopher: He's glad to see the kid doing something with himself, safe from drugs, but there's a tinge of jealousy over the attention Christopher's getting, particularly when it looks like he's leaving Tony and the mob behind.

Like Tony, the heads of the New York family are struggling to make peace with aging, death and what they'll leave behind when they're gone. Johnny Sack (Vince Curatola) has grown sick in prison and seems to be questioning every decision he ever made. "I got here, I quit smoking after 38 years. Exercised. Ate right. And for what?" he asks, but no one can give him an answer. Later, Phil Leotardo (Frank Vincent) stares at old pictures of relatives on the wall and echoes Johnny Sack's sentiments. "I'd like to do it over, boy, let me tell you. I fucking compromised everything. Twenty years inside, and not a fucking peep. And for what?" The repetition of this question "For what?" is clearly intentional, as it connects these aging mob leaders, wrestling with the meaning of their past decisions. The question also serves as an omen of big changes to come: When the patriarchs of a family start questioning the basic fabric that holds the chaotic mess together -- to stay the course, no matter what, and never, ever rat on your brothers -- it seems clear that a catastrophic shift may be in the works.

The future is so uncertain for the New York crime family that Tony actually wants Little Carmine (Ray Abruzzo), a man whose power he's undermined for years, to step up and run things. Little Carmine tells Tony about a dream he had in which his dead father gives him an empty box and says "Fill it." Tony assumes the dream means that Little Carmine should finally take over and become the New York don. But Little Carmine has a different interpretation: "That dream with my father, the empty box? It wasn't about being boss. It was about being happy."

Much as "The Sopranos" explores the absurdities and ugly realities of mob life, the show has focused, above all else, on the struggle for happiness. At the start of this last chapter in the family's history, we can see that, as they age, Tony and his family may seem more at peace than ever, but they also have to work harder than ever to keep a grip on their happiness. And unlike the first half of this final season, in which peripheral stories like Vito's murder distracted from the bigger picture of Tony's ultimate fate, the ominous mood is hard to miss in the show's final run. At every turn, characters refer to the meaning of family and the haunting lure of memories, looking back and laughing at old scars while trying to make fresh wounds disappear overnight. "We're family! Jesus, these things happen!" they tell each other, as if trying to convince themselves. "The whole thing's already forgotten!" But the troubled history of this family seeps into every detail of the landscape, and Tony, for one, can't escape it.

The first two episodes mark a return to "The Sopranos" we fell in love with, every scene rich with humor and sadness, every moment heavy with echoes of the past and omens of things to come. Creator David Chase and the other writers have always done an exceptional job of coloring each scene with the vivid palette of distant memories, and this skill comes into play now more than ever. Even as Tony sits, staring blankly out onto the water at the lake, we hear Nica in the background, singing with her nanny: "Four little ducks went off one day, over the hills and far away..." The doleful memory of those ducks in Tony's pool in the show's first episode sneaks into the edges of our consciousness. We're invested in Tony as a character, for better and for worse.

Viewers have predicted countless twists and tragedies that might await Tony and his clan, and expectations are running impossibly high. Even so, the engrossing details and resonance of these first two of nine final episodes make it clear that, no matter what happens, if the events that unfold have a profound impact on Tony -- and it's hard to see how they won't -- then they'll have a profound impact on us as an audience as well. Like the ducks in his pool, the smallest symbols and relics from Tony's past have the power to move us. His darkest fears and nightmares feel like our own. Recognizing this, Chase signals in these episodes that we'd better hold on tight, because we're in for a breathtaking, bittersweet ride.