A great movie lurks within this tale of a 1971 literary hoax elaborate enough to put James Frey to shame. 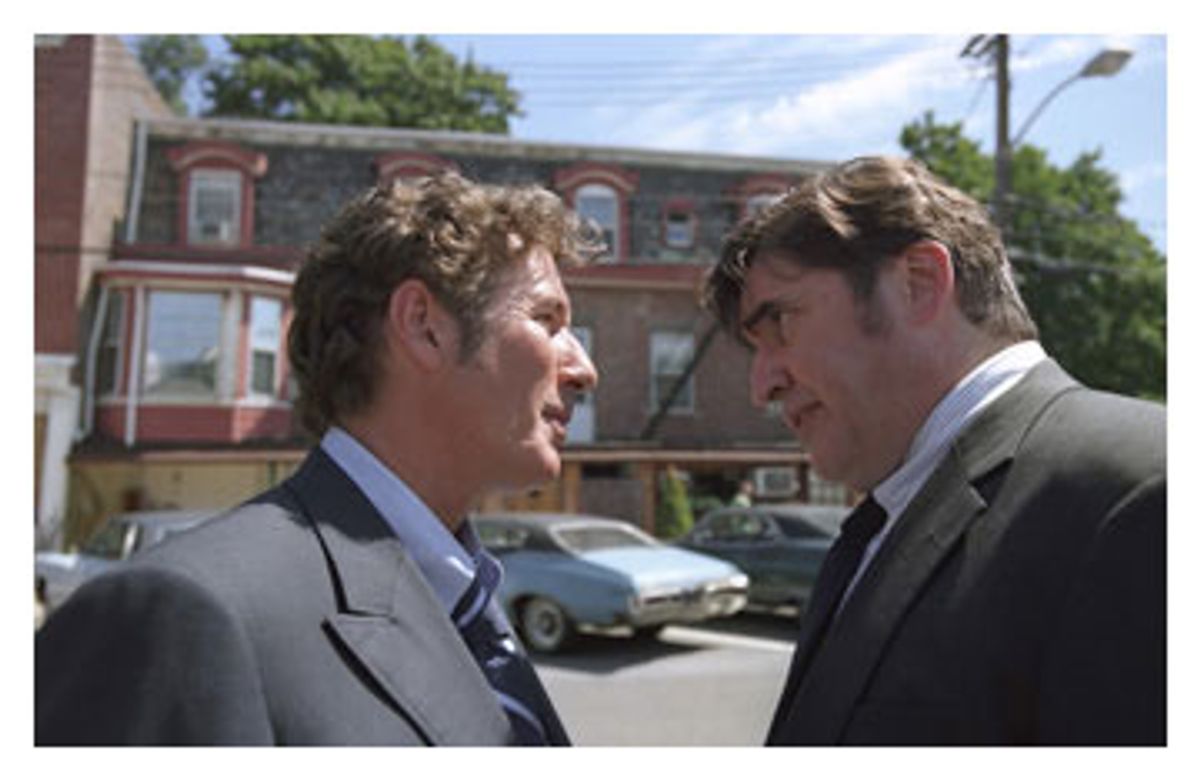 Lasse Hallström's "The Hoax" is an entertaining botch of a movie. There's a great picture lurking somewhere in the story of how, in 1971, writer Clifford Irving (played here by a foxy, suitably charismatic Richard Gere) fooled both McGraw-Hill and Life magazine into believing that the reclusive, nutso billionaire Howard Hughes had chosen him, privately and mysteriously, to write his authorized biography. Irving, broke at the time and desperate for a book deal, kicked off the elaborate hoax by forging a series of handwritten communiqués, claiming they had been sent to him directly by Hughes.

After enlisting the help of his friend Richard Suskind (Alfred Molina, in a tremulous, sweaty, funny performance) as a researcher, he deepened and widened his crazy scheme: "The Hoax" -- which is based on fact, although Hallström and screenwriter William Wheeler freely admit they've done some movie-style embellishment -- shows us an obsessed Irving dressing up as Hughes circa 1935, complete with a slim, penciled-on mustache, apparently attempting to enter the body of the essentially fictional character he's created. Whenever anyone from McGraw-Hill (such as Irving's barracuda editor, Andrea, played by an amusingly brittle Hope Davis) or Life (such as the officious managing editor Ralph Graves, played by Zeljko Ivanek) would challenge him on a dubious Hughes-related claim, he'd manufacture an explanation so audacious that they'd willfully, and stupidly, believe him.

The first half of "The Hoax" details how Irving parlayed his desperation into big bucks (even though his high-stakes deception eventually earned him a jail term). Hallström shows Irving zipping around early-'70s Manhattan, donning black tie to attend Truman Capote's Black and White Ball (which the filmmakers acknowledge was held in 1966, although the event was too glamorous for them to resist), where he tries desperately to avoid the gaze of his erstwhile mistress, celebrity-actress bombshell Nina Van Pallandt (portrayed, with lethal, droopy-eyed charm, by Julie Delpy). He's trying to be a good husband to his Swedish-German wife, Edith (Marcia Gay Harden, surprisingly believable in lank blond hair), who sticks by him even in the face of infidelity and bankruptcy. (Near the beginning of the picture, a mover's truck shows up at the Irvings' suburban home to repossess her favorite couch.)

Desperate times call for desperate measures, and Hallström and Wheeler have a great time setting up and embroidering Irving's increasingly elaborate scheme. When Suskind, jittery during a meeting with Life magazine honchos, inexplicably utters the words, "He gave me a prune," Irving, without missing a beat, concocts an elaborate story about how the two met Hughes in one of his exotic hideaways, and the eccentric germophobe reached out from the mosquito netting around his bed to offer Suskind a piece of shrunken, organic fruit. The editors and execs clustered around Irving beam with pride, thrilled to be a party to this unprecedented (and potentially very lucrative) venture. We know, as Irving does, that the joke is on them, and it's a delicious one.

Hallström, Wheeler and the actors at first treat Irving's feat of magnificent trickery as a kind of performance art rather than an illegal act. Gere's Irving is a glamorous scalawag, and the boldness of his stunt makes our current brand of lit fakery seem cheap and puny by comparison: Kids today have no extravagance, no class. (Making up your own autobiography, à la James Frey, is for wimps.)

"The Hoax" loses steam as it increasingly focuses more on Irving's emotional and psychological unraveling. I suppose that had to happen: It would just be too irresponsible to make a movie treating Irving like a folk hero. Aside from the fact that what Irving did was illegal and unethical, he did, at least in terms of what the movie tells us, treat the people closest to him very shabbily.

Naturally, when "The Hoax" devolves into a moral, cautionary tale, it becomes a lot less fun. You long for moments like the one, early in the picture, in which the discreetly pompous Life editor Graves gives Irving a tour of the magazine's offices. He points to a blown-up photo of Neil Armstrong walking on the moon and says, with bland superiority, "History. Quite a responsibility." It's enough to make anybody want to try to get away with making stuff up.