To Damascus with Nancy Pelosi

Why neocons are so apoplectic about the speaker's visit to Syria. 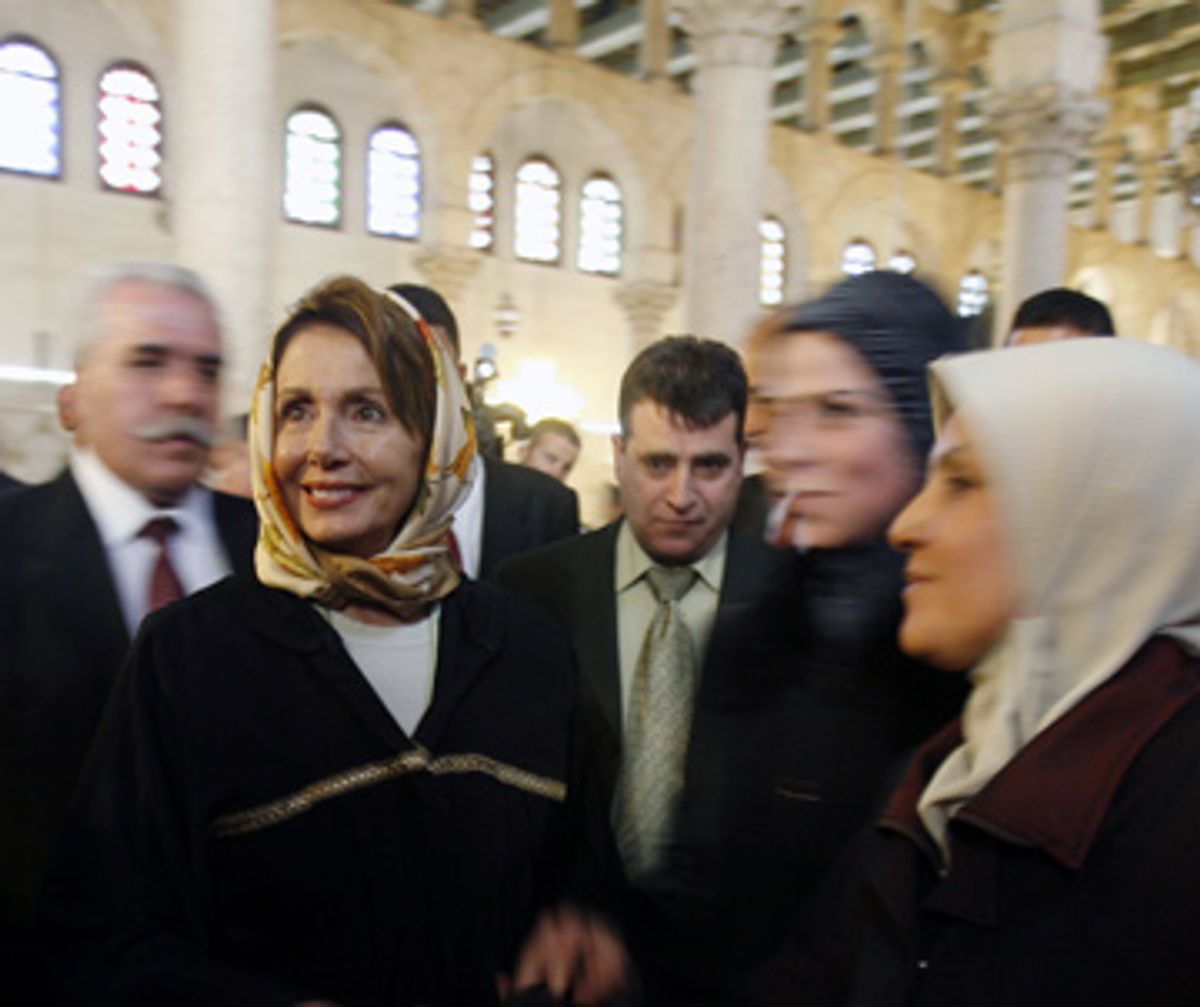 With her brief visit to Syria, House Speaker Nancy Pelosi has provoked an outburst of flaming hysteria from the Bush administration, as well as from the neoconservatives who fashioned its ruinous war and failed foreign policies. The screaming critics of the speaker charge her with undermining presidential power, freelancing Mideast diplomacy, appeasing a terrorist regime and even surrendering to Islamist radicalism by donning a head scarf. By merely meeting with Bashar Assad, the Syrian president, Pelosi supposedly proved that she was eager to promote irresponsible partisanship at the cost of national unity and constitutional order.

In the New York Post she was accused of "making a date with a terrorist." On the NewsMax site she was portrayed as "appeasing dictators in the Middle East." In the Washington Post she was ridiculed for attempting to mount a "shadow presidency." And on CNN, she was mocked for planting a "big wet kiss" on Assad as a "publicity stunt."

Yet those furious complaints were all false and, more important, beside the point. The problem is not what Pelosi did or said, but how she exposed the exhaustion of neoconservative policy.

As most of her critics surely know, there is nothing outrageous or even unusual about a meeting between a foreign head of state and a member of Congress. Indeed, she was preceded on the road to Damascus by Rep. Frank Wolf, a prominent Virginia Republican who led a GOP delegation to meet with Assad, and she was soon followed by Rep. Darrell Issa, a California Republican whose remarks after seeing the Syrian leader were sharply critical of the Bush White House.

Pelosi was attacked for her remarks about the possibility of peace talks between Syria and Israel, as if this radical prospect had never been broached before. Before arriving in Damascus, she had met with Israeli Prime Minister Ehud Olmert and addressed the Knesset, pledging Democratic support for the defense of the Jewish state.

Although Olmert later attempted to embarrass Pelosi by declaring that he had given her no message for Assad, his own spokeswoman issued a statement after their meeting on April 1, which clearly indicated that they had discussed what she might say to the Syrian president. According to that statement, Olmert told her that he would enter negotiations with Assad only if Syria withdrew its support for Hamas and Hezbollah. There is no evidence that Pelosi said anything different in Damascus. Why she expressed optimism about eventual peace talks between the Syrians and the Israelis remains to be seen.

The speaker's rather bland remarks in Syria were no more provocative than the statement released by Wolf, who has not suffered any specific denunciation from the White House or the right-wing claque for his separate visit to Syria. "We came because we believe there is an opportunity for dialogue," he said, speaking for himself and Reps. Robert Aderholt, R-Ala., and Joseph Pitts, R-Pa. Rep. Issa went further, bluntly rebuking the Bush administration for failing to encourage such a dialogue with Assad.

As for the headscarf, which Pelosi wore while visiting a mosque and a marketplace, there could be no conceivable reason to vilify this natural gesture of respect -- except to excite religious and ethnic bigotry. Women have been covering their heads upon entering certain places for hundreds of years, and so have men for that matter. Nobody complains when an American politician puts on a yarmulke in a synagogue or an American woman covers her bare arms in a cathedral, and nobody should.

No, the war against Pelosi is a rear-guard assault by the White House against moderates and liberals in both political parties who understand that the failed Bush policies have jeopardized American interests and hurt the Mideast peace process. What Wolf and Pelosi have in common is their endorsement of the Iraq Study Group's proposals, which emphasize regional diplomacy, including direct talks with both Syria and Iran. Indeed, it was Wolf who first approached James Baker about undertaking the Iraq report, and who sponsored the legislation that paid for the group's work.

The neoconservatives, both within and outside the White House, resent Pelosi for publicly dissenting from their ideology of war and their rejection of diplomacy. Their own vision has collapsed in ruins; they have gravely harmed the American military and discredited the ideals of democracy, and they have run out of ideas. That sucking sound is the vacuum of their minds.

Now in their bankruptcy, they can only smear those who, like Speaker Pelosi, are attempting to promote a bipartisan alternative. Let us hope she possesses the courage to continue that crucial mission.