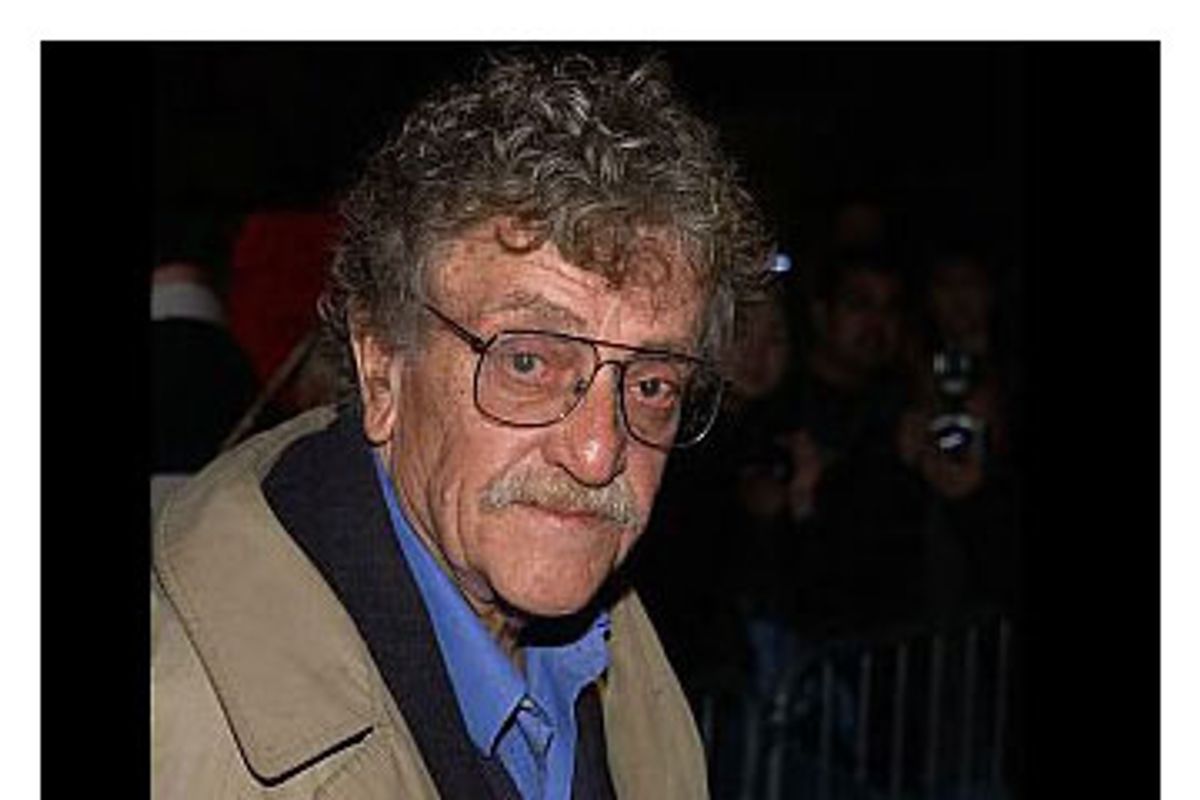 At the University of Iowa ... I taught two freshmen rhetoric classes four mornings a week, then went home to eat lunch and write ... Kurt Vonnegut was our neighbor. We had adjacent lawns; he lived behind us, at the top of the hill. One day that summer, he was outside on his lawn or on his front porch four times when I was outside, and we waved and called to each other. The first time, I was walking home from teaching, wearing slacks and a shirt; the next time, I was wearing shorts and a T-shirt I had put on to write; then I wore gym shorts without a shirt and drove to the track; in late afternoon, wearing another pair of slacks and another shirt, I walked up to his house to drink. He was sitting on his front porch and, as I approached, he said: "Andre, you change clothes more than a Barbie doll." (Iowa City, mid-1960s)

From "Meditations From a Movable Chair," by Andre Dubus (Random House, 1999)

The rights to writer Kurt Vonnegut's novel Cat's Cradle had lapsed ... so I phoned Kurt and made an appointment to meet him at his home on Cape Cod. To me, Cat's Cradle was the perfect book to put into motion picture form...

Kurt met me at the airport and we had some oysters, a delicious clam chowder and several martinis ... At Kurt's request, I stayed at his house for three days, enjoying his life. I tromped through the muddy sand in the marshes with the gang, as we hunted the prized steamer clams for a big barbecue. The house was full with Kurt's children and his late brother's children, and I stayed in the barn. After his brother and sister-in-law had died, Kurt took the whole bunch on as if they were his own. I admired that commitment...

At one point, Kurt invited me into his study, inscribed a copy of Cat's Cradle and fished a joint out of his desk while asking me not to tell the children. What a wonderful family... (Barnstable, Mass., 1969)

I was part of a panel arranged by ... Doubleday. The idea of the panel was to work out some standardized future background around which a number of writers could do stories. I didn't see how it could possibly work, but I was willing to collaborate on the chance that I was wrong.

One of the panelists ... was Kurt Vonnegut, whom I now met for the first time. Over a glass of beer that evening (I had ginger ale) he said to me, "How does it feel to know everything?"

I said, "I only know how it feels to have the reputation of knowing everything. Uneasy." (New York, 1970)

Meeting Kurt Vonnegut -- like this, through [Vonnegut's daughter] Edie -- threw me, at least at first. I'd met some heavy hitters in my first few months in the television news business, but never on such intimate, almost equal, terms. It offered me a close (and advantaged) perspective on fame, my first. I liked the way it looked on him. In this strange light, Kurt struck me as a very unusual guy, a lot like the characters he wrote about: unhinged, awkward, out of place on this planet. He always seemed to see the bizarre aspects of everything, the benignly twisted. He was almost like an eccentric professor, or inventor. He wore a constant half-grin, and saw the absurd in everything. There was nothing cynical about the way he saw the world; actually, he was almost childlike in that way. (Barnstable, Mass., 1971)

From "Exposing Myself," by Geraldo Rivera with Daniel Paisner (Bantam, 1991)

We talked John Candy into hosting our weekly segment [of CBC's "90 Minutes Live"] -- presenting the talent, as it were ... Candy brought out his first performers, a father and son. The father had a great snake of a whip in his hand, with which, to warm up, he snuffed out a couple of candles. Then the son, aged perhaps twelve, put an unlit cigarette in his mouth, and took up a position at one side of the performing area, profile to his dad. Drums rolled. The father reared, brandishing his arm, cocked his wrist. The whip curled out behind him. The son stood steady, hands clasped behind his back, the cigarette jutting from his lips. And then -- crack! -- the cigarette was gone. The audience oohed. The father bowed. The boy smiled wanly. I led the applause.

From his seat at the end of the couch, Kurt Vonnegut, Jr., leaned over my desk.

"On the nose," said Kurt Vonnegut. "The whip hit the boy's nose."

"Oh, surely not," I said behind my hand, as Candy began to introduce the next act.

The next day, in a darkened screening-room, I viewed the tape.

From "The Private Voice: A Journal of Reflection," by Peter Gzowski (McClelland and Stewart, 1988)

Went to Mortimer's for a party for Edie Vonnegut's picture-drawing that she did of "Mortimer." Is there really a Mortimer? And I couldn't believe the drawings would be that bad. Kurt Vonnegut was there, gave a little speech about how talented his daughter was. Remember she was married to Geraldo Rivera? (New York, 1977)

Services at Campbell's Funeral Parlor for Jim Farrell. There was a cross on the stage of this theater ... Over James T. Farrell, a cross! Kurt Vonnegut turned out to be a very peppery admirer of Jim the old radical. "Nice try," he said about the cross. "When Jim arrives at the pearly gates I am sure he will, as always, handle himself well." (New York, 1979)

From "A Lifetime Burning in Every Moment," by Alfred Kazin (HarperCollins, 1996)

Lunch in a teeming trattoria on Second Avenue. Vonnegut is a mildly lionized regular here, but it was mid-December, and we took our chances among the parched and panting Christmas shoppers of New York. Our table seemed to be half-way between the lobby and the toilet. I wondered, protectively, whether we'd have done any better during Vonnegut's heyday; perhaps the head waiter hadn't liked Slapstick either. 'What about your new novel?' I asked. 'How would you grade Deadeye Dick?'

Vonnegut looked doubtful. 'I guess it's sort of a B-minus,' he said.

"It has been my experience with literary critics and academics in this country," he has written "that clarity looks a lot like laziness and ignorance and childishness and cheapness to them. Any idea which can be grasped immediately is for them, by definition, something they knew all the time." (1983)

From "The Moronic Inferno and Other Visits to America," by Martin Amis (Jonathan Cape, 1986)