The end of the affair

For almost a decade, Harry Potter and Tony Soprano have been my intimate companions. Now it's time to disentangle myself from their lives and say goodbye. 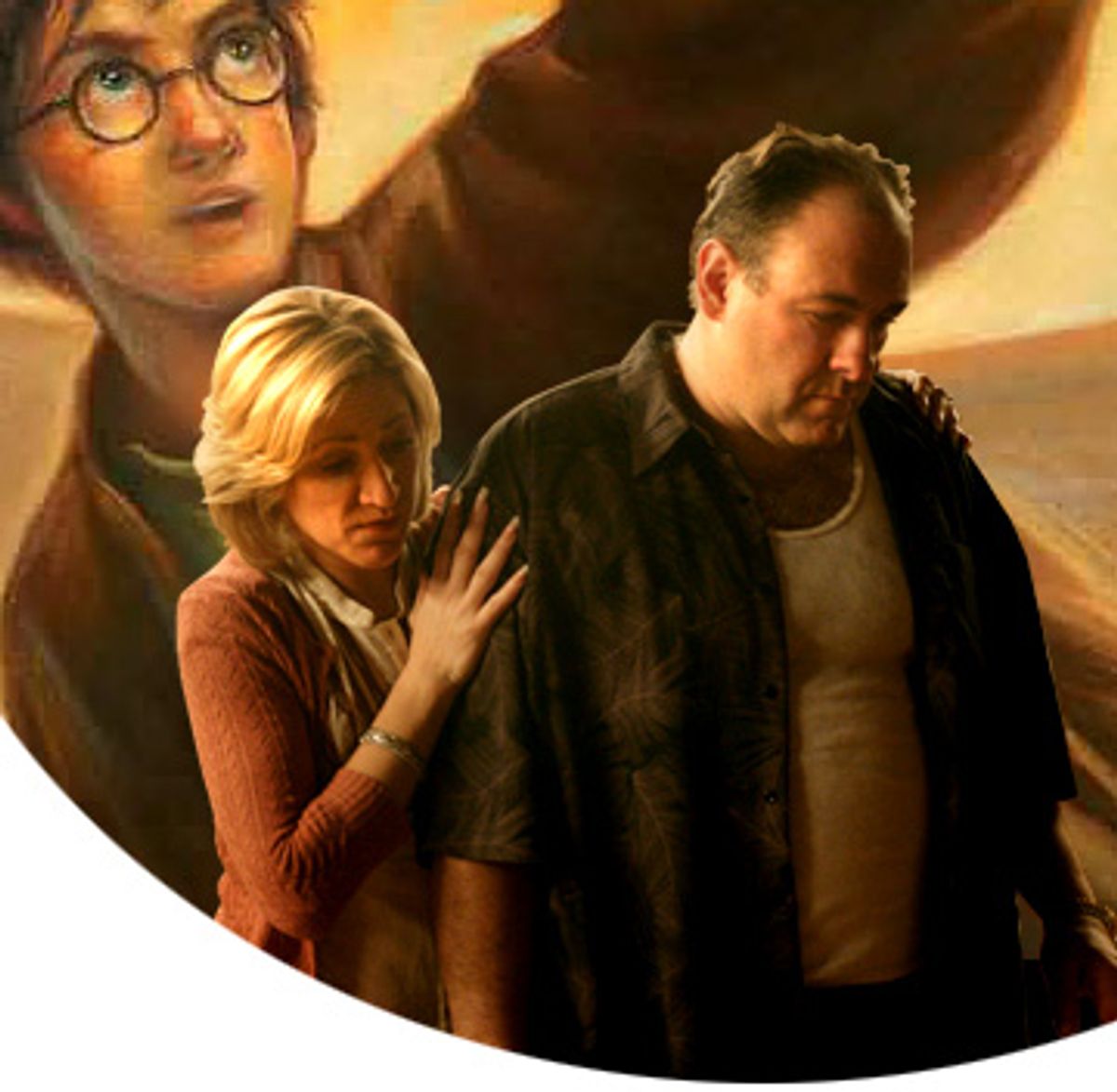 I have never understood people who yammer on about wanting "closure"; they can't wait to have the mysteries of their relationships explained, their strings tied neatly into bows. To me, not knowing is the pulp of life -- the thing that keeps us getting out of bed, keeps us moving forward toward the conclusion. Getting there -- reaching the end, finis, kaput -- in life or in fantasy: to me, that is the deepest affront; it is an end to imagination, a limit on possibility; it is final. It is death.

And so this April feels particularly raw, as I look down the barrel of a season loaded with the saltiest sorrows. As of this week, only eight hours and 784 pages separate me from the ends of two stories that have sustained me and many others for the better part of a decade. This summer, fans of "The Sopranos" and of Harry Potter will get their closure.

Last Sunday night HBO aired the first of the nine episodes that will finish off "The Sopranos," a show that has beguiled and terrified us with its violence, passion and unnervingly good humor for eight years. The final installment is scheduled to air on June 10. Six weeks later, J.K. Rowling will publish "Harry Potter and the Deathly Hallows," the seventh and final book in her gripping bildungsroman saga about growing up Gryffindor.

It would be disingenuous to suggest that I am anything other than achingly, pantingly, pathetically anxious for these next and final chapters. Sunday was a holiday for me, and not because of the risen Christ; by the time the synth drum started beating over Tony's ninth-to-final ride away from Manhattan I was, quite literally, wiggling with pleasure. But 52 minutes later it was over, one hour of my final nine spent, the lonely chill of impending finality taking hold.

A shadow hung over the show from the opening scene, in which menacing knocking drives Tony and Carmela from bed, and Carm expresses her first half-conscious thought: "Is this it?" I'm sorry to say that it is. And knowing that this is it, it was hard not to read the tea leaves: Tony's Fredo-rific rowboat talks with Bobby, that creepy story about a kid drowning in a swimming pool, so like the swimming pool from which the Soprano family saga first took flight.

There is a similar process of reckoning happening for readers of the Harry Potter books. Two weeks ago, the unveiling of the book's wraparound cover art on the "Today" show sparked a speculative frenzy about what every scribble might mean. There were Harry and Voldemort, playing what looked like a particularly intense game of craps in front of a stadium full of people. There was a shadowy object around our hero's neck that looked very much like a Slytherin Horcrux, and the scene was framed by tattered brown curtains that seemed to recall the veil in the Department of Mysteries at the Ministry of Magic that separates the living and the dead.

Yes, it's another universe, but that's been part of the draw for both genre narratives. I have become fluent in the lingo and locations of these foreign worlds as I've been absorbed by them, from gobstones to goomahs, until they eventually mesh. During fitful nights, my mind teems with wizards and mobsters, playing out their last acts on Clue-board canvases: There's Christopher torturing Neville at the Bing with the Cruciatus Curse. The ghost of Adriana tells Harry where to find the final Horcrux that will enable him to destroy Tony.

The different natures of these fictions mean they should have little in common except the degree to which they have welcomed rapt visitors. But they are also tales of exotic worlds in which we find ourselves in the mundane. We have so identified with Tony's agita over Meadow's boyfriends that we forget to judge him for being a murderer and serial cheat. In the wizarding world, we have fretted about passing exams and hooking up with the right guy so easily that we don't notice the strangeness of our concerns over producing an Expecto Patronum spell to summon the smoky image of our dead father as a stag. Wait ... that didn't happen to us in high school?

People complain about mob-lite "Sopranos" episodes, or the Quidditch-larded chapters of Potter. But that is the kvetching of the spoiled viewer; the truth is we would watch these characters watch paint dry -- and we have, slogging through hundreds of pages on the housecleaning of Grimmauld Place and hours of Carmela's thoughts on plywood. But I haven't minded these quotidian concerns; there's always the chance that buried in them is a nugget of potential -- a locket or a spec house on which a crucial plot point will someday turn.

The pleasurable agony is not new; television did it in earlier "Who Shot JR?" iterations. In a time when there were only three channels, it was easier to chew endlessly on the question of who killed Laura Palmer for one sweaty summer, or to feel universally gratified by the site of "Moonlighting's" Maddie and David finally getting it on. It's the old Dickens story told over and over again: giant groups of people gripped by the same question -- what will happen next?

Both Potter and "The Sopranos" prove that there are exceptions to every prognostication. Who 10 years ago would have predicted children and adults with MTV attention spans lining up at midnight to buy 800-page books, or audiences clamoring for original programming from the network previously known for regular airings of "Just One of the Guys"? In the era of YouTube, it's harder all the time to feel a part of a monolithic culture, with all eyes simultaneously trained in the same direction for more than 30 seconds. These two stories, more than almost anything else, are keeping us from falling over the precipice of a thoroughly splintered cultural experience.

Movies are produced and cycled through cineplexes at such volume and speed that they cannot remain atop the box office charts in the way that touchstones like "Star Wars" did. Theaters and bookstores are glutted with products designed to tickle the taste buds of specific quadrants of audiences. While the sheer number of channels from which we now pick means that "M*A*S*H"-finale appointment-viewing events will be fewer with every passing year, "The Sopranos," which has inspired a new generation of addictive television dramas, has helped ensure that they will not disappear forever.

But still, how often will we turn our televisions on at the same moment (let alone crack the spines of millions of copies of the same book at midnight) for any reason except to watch tragedies of 9/11 proportions unfold? We long for this kind of shared experience, the being a part of something. And what is notable about the summer of Sopranos and Potter is that in an age of spoiler alerts, of TiVo and on-demand services that allow us to watch at our convenience, the one-time-only suspense is so intense that there will likely be no grace period for lollygaggers; viewers and readers will be forced to participate in real time or find themselves ripped from speculative reverie by the jarring revelation of what in fact is going down. "Is this it?" Yes. And you don't want to miss it.

And so I'm excited. How fun to have things to look forward to. April, May, June, July ... months filled with what I am confident will be a gush of fast-flowing plot.

But then it will be over. We will have had to say goodbye to so many of the people we have spent 10 years getting to know and love. I sort of can't imagine my life without Carmela in it. (Though, to be fair, I couldn't imagine it without Dumbledore, either.) And in this we are about to be put in the shoes of the characters we're empathizing with -- accepting the grim punishments of having loved and now, inevitably, losing.

Like Tony drifting erratically into his late 40s and Harry becoming an adult, these narrative ends force us to feel our age by reminding us of who we were when we began them. When the fourth Potter book was published in the summer of 2000, I was covering a story in the Hamptons with an ex-boyfriend, with whom I also watched "The Sopranos" every Sunday; this week, as it happens, I will be a guest at his wedding to someone else. And I see the features of the men I have loved since in Tony's bald pate and crinkly eyes, not because any of them have particularly resembled James Gandolfini, but because for years now, the affections I have felt in my life have overlapped with affections for the characters in my fictions.

"The Sopranos" and Harry Potter resonate in part because we got to know them when our lives, and our world, were very different. As a friend of mine who moved back to Paris a few years ago told me in an e-mail about trying to download the final "Sopranos" episodes, "I always get such a pang when the opening credits start rolling and it feels like I'm wooshed back to New York and that first winter when [she and her husband] started getting hooked and I get so incredibly nostalgic for that time, we were so careless and so glad to be in New York, it was pre 9/11 and I think of the East Village and you guys and it's all a blur and I can't stand the idea that it's all over."

Of course, the reason we are compelled to engage in narrative at all is because of the way it efficiently mirrors the pull of life: the not knowing, the wanting to know, the speculation, and finally, I guess, the end. Anticipation of completion motivates us; satiety is overrated. We want, we want, we want, and then we get, and it is finished and we are empty without the wanting to fill us up.

And so now, while we are still wanting -- to know what will happen to Tony and if Snape is good or evil (he's good) -- we are full. So full of speculation and guesses and ideas and theories. We can feel as much a part of the story, an active, living narrative, as the characters we are considering, arguing with each other about who is really doing what and why. But talk to me in August, when our heads aren't brimming with possibilities, but littered with bodies of characters who will not rise again -- not even in dream sequences, because Tony and Harry will not be doing any more dreaming, about talking snakes or talking fishes.

On Sunday, as the final arc of "The Sopranos" was about to unfold, I was grabbed by the nonsensical impulse to record the episode, along with all the HBO "last episodes" nonsense that surrounded it, to authenticate the not-knowingness of the event, as someone might once have squirreled away a newspaper ad asking, "Little Nell, alive or dead?" or "Do they ever get the ring to Mordor?" What could propel me to want to stop time in this way? I suppose it would remind some future version of myself that I was around before these stories became calcified, that I lived and breathed them while they still lived and breathed and tantalized with possibility. I guess I wanted to be able to recall that there really was a time when no one knew how they would end.