With at least 33 dead and 29 wounded, some ask why the campus wasn't shut down after an early-morning killing. 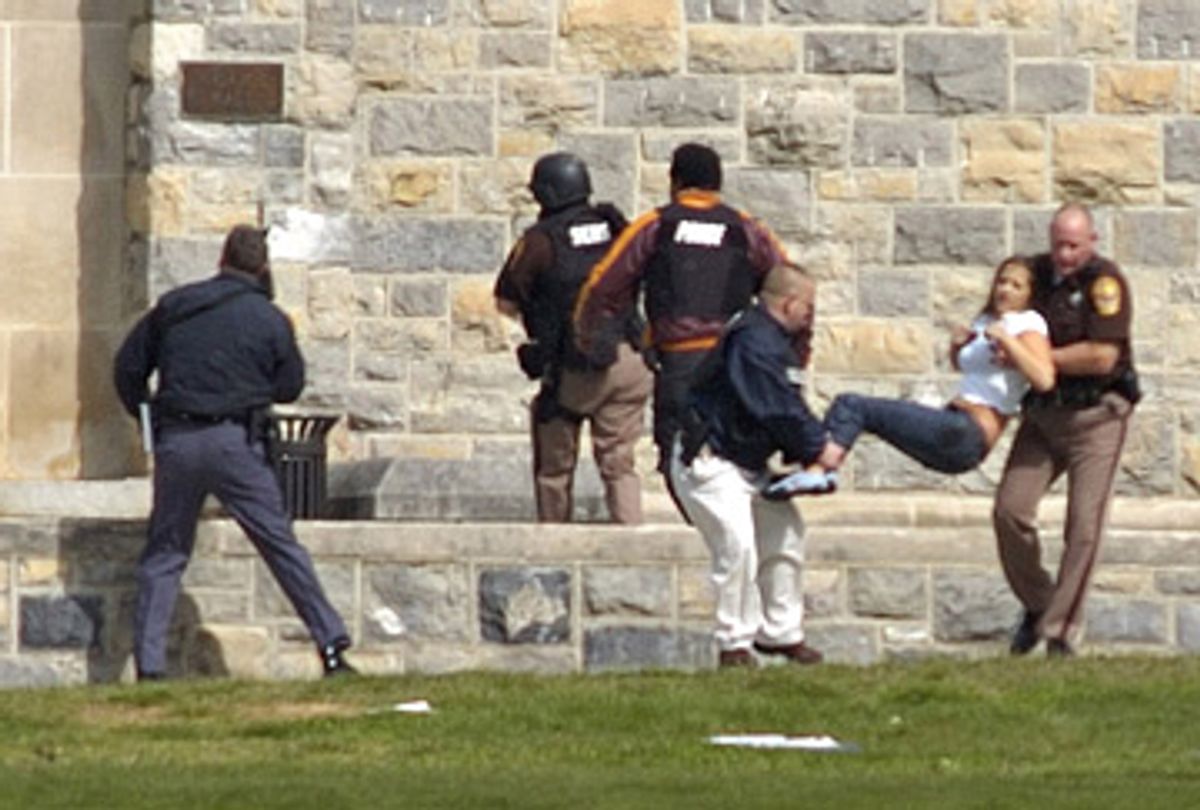 Students at Virginia Tech, where at least 33 people are confirmed dead and at least 29 wounded in the worst school shooting in U.S. history, say they were left in the dark for up to two hours after the initial murder in a campus dorm.

The as-yet-unnamed gunman apparently shot and killed a victim on the fourth floor of the West Ambler Johnston dorm at approximately 7:15 a.m., according to the timing of a 911 call to Virginia Tech police. Two hours later, at approximately 9:30 a.m., the same gunman allegedly shot scores of people in Norris Hall, an engineering classroom building across the 2,600-acre Virginia Tech campus. But residents of West Ambler Johnston say they were not informed of what had happened in their building until 9:26, when an e-mail was apparently sent to all students telling them that there had been an incident in the dorm. By that time, the gunman may already have made it to Norris Hall.

"A shooting incident occurred at West Ambler Johnston earlier this morning," the e-mail read. "Police are on the scene and are investigating. The university community is urged to be cautious and are asked to contact Virginia tech police if you observe anything suspicious or with information on the case ... Stay attuned to the www.vt.edu. We will post as soon as we have more information."

Megan Clough, a 19-year-old who lives on the fifth floor of West Ambler Johnston, says she was awakened at around 8:30 by her resident advisor, who knocked on her door and told her to stay in her room. The R.A. did not tell her why she needed to remain in her room.

Casey Ademski, 19, who lives across the hall from Clough, says she received a similar knock on the door. She was told not to go outside, but was not given a reason. She looked out her window and saw someone being carried out on a stretcher. "I think they should have notified the other dorms also," Ademski said. Allie Jarett, who also lives on the fifth floor, says she left the building at 8 a.m. for an architecture class without having heard anything about the shooting in the dorm.

Dennis Griffin, a 19-year-old who lives on the sixth floor of West Ambler Johnston, says he knew nothing about the shooting until he received the e-mail after 9. He was already in his second class by that time. When he left the dorm at 8, he says he thought nothing of the police cars and ambulances outside the building because there had recently been several bomb threats on campus. Griffin says he believes classes should have been shut down after the first shooting. "Something more should have been done."

Nineteen-year-old Michael Dalton, who lives in another dorm, says he too learned nothing of the shooting until the first e-mail.

Virginia Tech students made similar complaints to other members of the media. "I was in class ... two buildings over," Michelle Billman, a student radio general manager, told ABC News. "Someone got a text message saying something was going on. After that we were told to stay in the building, away from the windows. Right at the end of class, 9:50 or 9:55. I checked my e-mail about 8:30 ... went to my class as I usually would. By 8:30 no one [had been] notified that something had happened at 7. We went onto a dangerous campus not knowing."

By mid-afternoon, some students were sharing their stories with friends and family via online posts. On her LiveJournal blog, Brittany Wilson described waking for class at 6:30 a.m., studying until 8:30, and going to class, where a friend informed her that as she had been leaving her room at West Ambler Johnston, she had been stopped by police and asked for identification, and then sent on her way to class. "At that time, the first shooting had already occurred in WAJ!!!!! Why were we allowed to leave our damn dorms?!!?!" wrote Wilson.

The students were finally warned of the presence of an armed intruder by e-mail. "A gunman is loose on campus," it said. "Stay in buildings until further notice." It was mailed at 9:50 a.m.