The longest day ever

Jack bags the bad guys and the bombs early, leaving a few extra hours to sacrifice national security for his lady love. Quick, somebody turn back the clock! 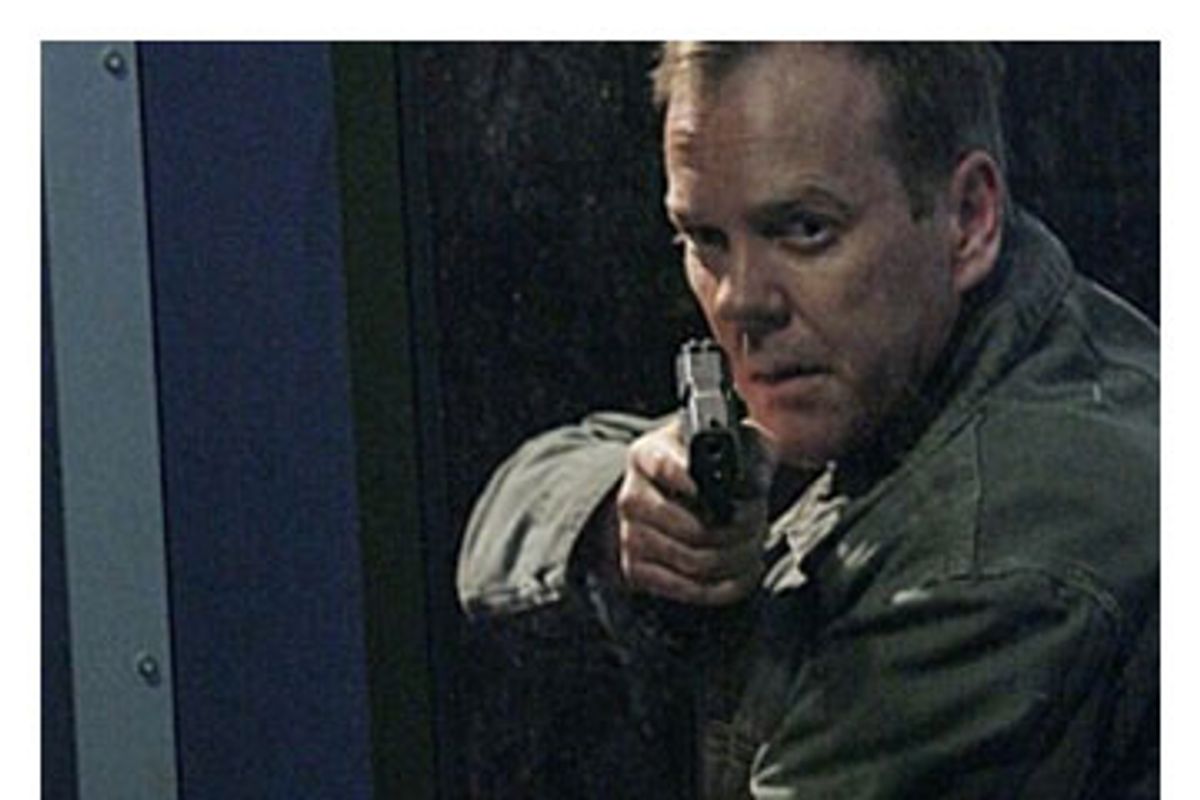 Jack Bauer will do anything for the sake of national security. He'll risk his life, disappear, shoot his co-worker (Curtis or Chappelle, take your pick), kill an innocent bystander or two, become addicted to drugs, alienate his daughter, start a prison riot, break into an embassy, kill a man by chomping down on his jugular, and spend two years being tortured in a Chinese prison. Jack will gladly choke, intimidate and torture anyone, from a co-worker to his own brother to his ex-girlfriend, Audrey Raines, if he's convinced that's what's necessary to keep the American people safe.

Or at least, that was the old Jack Bauer. On Monday night's episode of "24" (9 p.m. on Fox), that man was replaced by a stunningly lifelike replica who was willing to sell national security up the river by stealing bomb components and giving them to the Chinese, just to ensure the safety of Audrey.

Now, granted, this is one of the big risks of a plot-driven, suspense-centered serial drama like "24" -- compromises are sometimes necessary to keep the story hurtling forward at a breakneck speed. Over the course of six seasons, we've seen almost every other character on the show take risks to save their hides or the hides of loved ones: Tony, Michelle, Kim, even David Palmer were shown turning away from their most fiercely guarded ideals in the face of ungodly amounts of pressure and high personal stakes. And yes, Jack assures everyone that his real plan is to commit suicide, thereby destroying Audrey's captor, Cheng, the components and himself in one big, efficient blaze of gory glory. Even so, the old Jack wouldn't have even considered such a dangerous plan -- never! As often as everything around Jack shifted to serve the full-throttle speed of the plot, we knew that we could count on him to be the one constant on this sometimes kitschy, sometimes unrealistic, sometimes downright foolish nail-biter of a show.

That's why Monday night's "24" was so jarring. But the episode didn't just compromise Jack's integrity as a character; it threw the entire premise of the show out the window. Season after season, Jack Bauer and the other CTU agents are faced with a crisis that they're forced to solve in the course of one very bad day. Sure, there are subplots and subcrises and twists and turns along the way, but the main challenges facing Jack aren't conquered until the end of the season.

In this sixth season, not only is the main story a little weak -- a nuclear bomb levels Valencia, and all we see of it is an airplane that has crashed onto a rooftop? -- but we keep getting diverted by extemporaneous subplots that feel far removed from the action: We didn't even know Jack had a brother, and suddenly we're watching him torture the guy? Former President Logan has useful information on the Russians, but then he gets stabbed by the former first lady, Martha? President Wayne Palmer's sister's boyfriend, Walid, spies on some Muslims, finds out that they're completely innocent, and then disappears? Milo and Nadia at CTU alternately flirt and take turns appearing to be a mole? How do any of these stories really matter?

You may say that's the nature of the show, but "24's" plot twists weren't always so empty or so arbitrary. In the good old days, scheming characters may have been about as subtle as Old Man Withers on "Scooby-Doo," but at least they held a little weight and stuck around for more than two episodes. Remember how President Palmer's wife, Sherry, would alternately appear helpful and demonic? Remember how it wasn't always clear that she was up to no good? Remember how President Palmer's right-hand man, Mike Novick, was one part misguided jerk and one part loyal footservant? Remember how it used to feel dramatic when we suspected that there was a mole in CTU? Hell, even poor Edgar dropping dead from the nerve gas was a diversion that felt heavy, relative to the idiotic backbiting among Morris, Milo, Nadia and Doyle. Who cares if any of them are moles, really? Essentially flat characters like Tony and Michelle look like incredibly rich, complicated personalities, compared with these jokers.

But the worst twist so far came a week ago when President Palmer appeared to bring the country to the brink of nuclear war, only for us to discover -- Gotcha! -- that he was just bluffing this whole time. Those kinds of inorganic plot twists aren't just annoying, they erode the show's credibility and make us less invested in the outcome. Can you imagine how little we would've cared about "The West Wing" if President Bartlet suddenly resorted to an international game of chicken, on a whim?

But unlike "The West Wing," "24" clearly wants nothing to do with realism or seriousness or credibility, which is why it's no problem to feature a torture scene in every other episode. Fayed tortures Jack, Jack tortures Omar, Jack tortures his brother, Graem, Jack tortures the Russian ambassador, Fayed tortures Morris. The question is, why do the writers think that the stakes are automatically high when there's torture involved? The end result is like something out of "A Clockwork Orange": We're forced to watch torture so many times in a row that these scenes become utterly mundane and lackluster to us. Way to slowly and painfully kill the golden goose, guys!

With only two tricks up their sleeves this season -- twists and torture -- the writers have been churning out some of the most ridiculous dialogue ever, and on "24," that's saying a lot. Take Mike Doyle's congratulatory remark to Jack at the start of Monday night's episode, the sort of deadpan understatement that almost seems designed to draw a laugh: "I know you've been through hell, not just today but the last couple of years."

Or how about Cheng's response to Jack's questioning why he'd want the suitcase bombs in exchange for Audrey. "It's not the weapons themselves we're interested in," Cheng helpfully explains. "What we want is the component from the triggering mechanism. It contains a prototype algorithm old enough to be free of any modern encryption safeguards. With it, we'll have access to virtually all Russian defense technology!"

Dialogue this awkward and obvious is simply an amusing diversion when all of the other moving parts on this show are working, but with the wheels falling off the speeding bus this season, it's hard to stomach such thoroughly implausible exchanges.

To be fair, plotting out a show like "24" is like piecing together a very complicated puzzle, and you have to know the entire season's arc to do it well. Unfortunately, this season the writers either didn't know where they were headed, or changed their minds, or lazily plotted out a narrative arc that didn't work half as well as the main stories from the past five seasons. Instead of fixing the problem, they seem to think that they can hold our attention by tricking us over and over again, changing the essential nature of main characters so much that they're no longer recognizable, and providing countless dead ends. Haven't these guys watched "Melrose Place"? Once all of the characters have either slept together or tried to drown each other in the pool, it's all over. But instead of admitting defeat, the writers of "24" want to throw one big, orgiastic pool party.

And hey, maybe that's the natural end for a plot-driven serial drama like "24," caught in an ill-fated quest to raise the stakes higher each season than they were the season before. For die-hard fans of the show, though, it's still disappointing to see Jack Bauer, the most absurdly idealistic, self-sacrificing hero ever invented, reduced to a half-inflated pool toy. Yes, the one guy we thought we could always count on to be valiantly merciless and courageously inhumane is now prepared to risk international strife for the sake of his ex-girlfriend. Oh, how the mighty have fallen.

If only we could go back and start this day all over again ...