With the Virginia Tech shooter's identity revealed, some Koreans, fearing a backlash, are fleeing the campus. 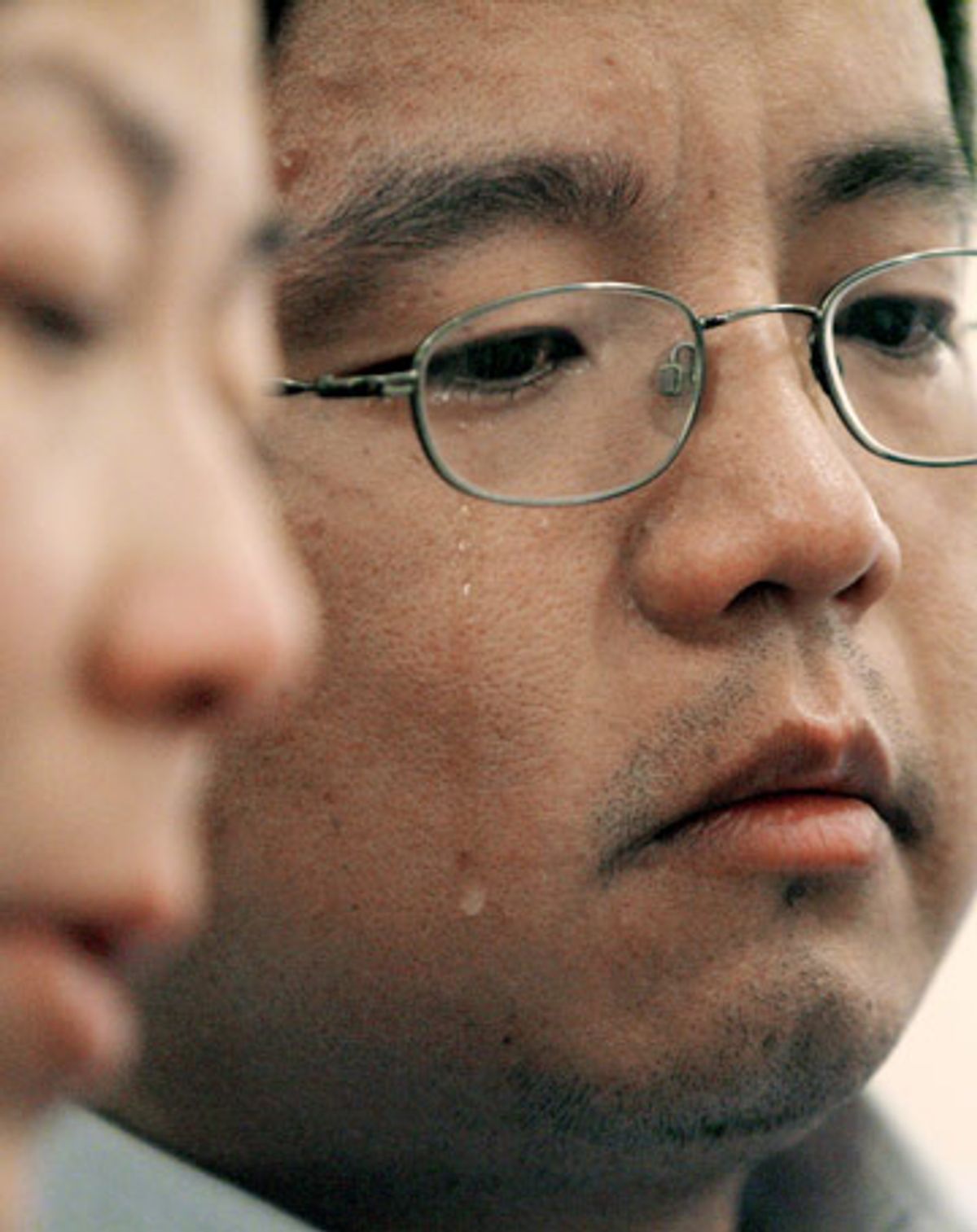 As Virginia Tech students grieve the worst shooting in American history, which left 33 dead on this state university campus in southwestern Virginia, some Korean students and their parents are fearing a backlash.

Police announced this morning that Cho Seung-hui was the suspect in the shooting deaths of 32 students and staff members in two Virginia Tech buildings. Cho apparently killed himself with a gunshot to the head. Cho, 23, was a permanent U.S. resident who was born in South Korea and moved to the Northern Virginia suburbs of Washington in 1992.

At about 1 p.m. Monday in front of Harper Hall, the residence hall where Cho lived on the second floor, Young-je Ko, 21, and his girlfriend Hyun-jung Kim, 19, sat in a black Mustang preparing to leave campus. Ko, a senior accounting major, said he and other South Korean students are afraid to stay on campus. Ko said many of their friends in a Korean Christian group were also planning to leave Blacksburg for Northern Virginia.

"It's like when 9/11 happened," Ko said. "Arab people are victims even though they didn't do anything wrong. It's just the same to me." Ko said Korean students have been e-mailing and calling each other since the release of Cho's name this morning. He said he wanted to attend today's convocation at 2 p.m., where President Bush was scheduled to speak, but friends warned him against it. "People said don't attend because it could be a bad situation," he said.

Ko, who emigrated from South Korea in 2001, and Kim, who emigrated in 2002, were heading home to Annandale, Va., near Washington, where their parents live. "My parents were so worried," Kim said. "When I left my dorm, I felt like the white kids were staring at me."

Jae Kun Lee, a Korean national, also decided to leave. His parents had called him from South Korea, where the shooting is being covered extensively by the media, and expressed concern for his safety.

"Sooner or later it's going to impact us directly or indirectly," said Lee. "If someone lost a loved one, of course, they are upset. Some bad things might happened just because I am Korean."

Lee was heading to a friend's house in Northern Virginia. "It's good to stay away and wait."

Racist screeds have cropped up quickly among right-wing commentators and on the Internet, including the idea that Korean males are excessively prone to violent jealous rages.

In Christiansburg, Va., less than 10 miles from Blacksburg, Mi-hwan Park said her daughter Veronica would be attending the convocation. Veronica is a member of a campus Korean student organization. Her mother said she raised her children to think of themselves as individuals more than part of a nationality. She hopes others see the crime as the act of an individual, but she is worried. "This is an individual thing, not a nation thing," she said.

Michael Ko and Mindy Koo, both 20-year-old Americans of Chinese descent, said other Asian-Americans they knew were afraid to be seen in public. "For me," said Ko, from Richmond, Va., "I just don't feel like I'm scared."

Mindy Koo said her parents called and asked her to leave Blacksburg and return to her home in Northern Virginia because they feared for her safety. She declined. "I feel that would be worse if all the Asian-Americans fled campus. We can't leave Virginia Tech in this time of grieving."

But Koo said she did wonder whether people were watching her this morning as she ate breakfast in a school dining hall. And Michael Ko said some of his friends had left Blacksburg.

Andy Wong is a 19-year-old freshman who lived on the same floor as Cho and never met the shooter, who has been characterized as a loner. Wong does not think there will be an anti-Asian backlash on campus. "It's not going to be taken as a race thing," he said. "People understand this is a special case."

Amy Ballard, a 19-year-old white sophomore at Virginia Tech, said that among her friends, the issue of the shooter's race and nationality hasn't really come up. "It's interesting that he was an international student, but I feel it isn't really relevant at all to anything."

Representatives of the South Korean government sent condolences after Cho's national origin was revealed. South Korean President Roh Moo-Hyun said he was "indescribably shocked once again by the fact that the tragic shooting incident at Virginia Tech on April 16 was caused by a South Korean permanent resident.

"We convey deep condolences to the victims and their bereaved families and the [American] people," said Cho Byung-Jae, head of the North American affairs bureau of South Korea's foreign ministry. But he also mentioned that the government was taking "safety measures" for Koreans in the United States. He was apparently referring to the possibility of reprisal attacks against ethnic Koreans in the U.S. He said he hoped the shootings would not "stir up racial prejudice or confrontation."

Before Hyun-jung Kim and Young-je Ko drove out of the parking lot at Harris Hall, Ko questioned whether things might be worse in Annandale, a Northern Virginia city with a large Korean community. Still, he said he felt safer with family. "We are all Hokie [Virginia Tech students] here, but we don't know what will happen."