"Make sure the rug says 'optimistic person comes to work'"

George W. Bush explains it all for you. 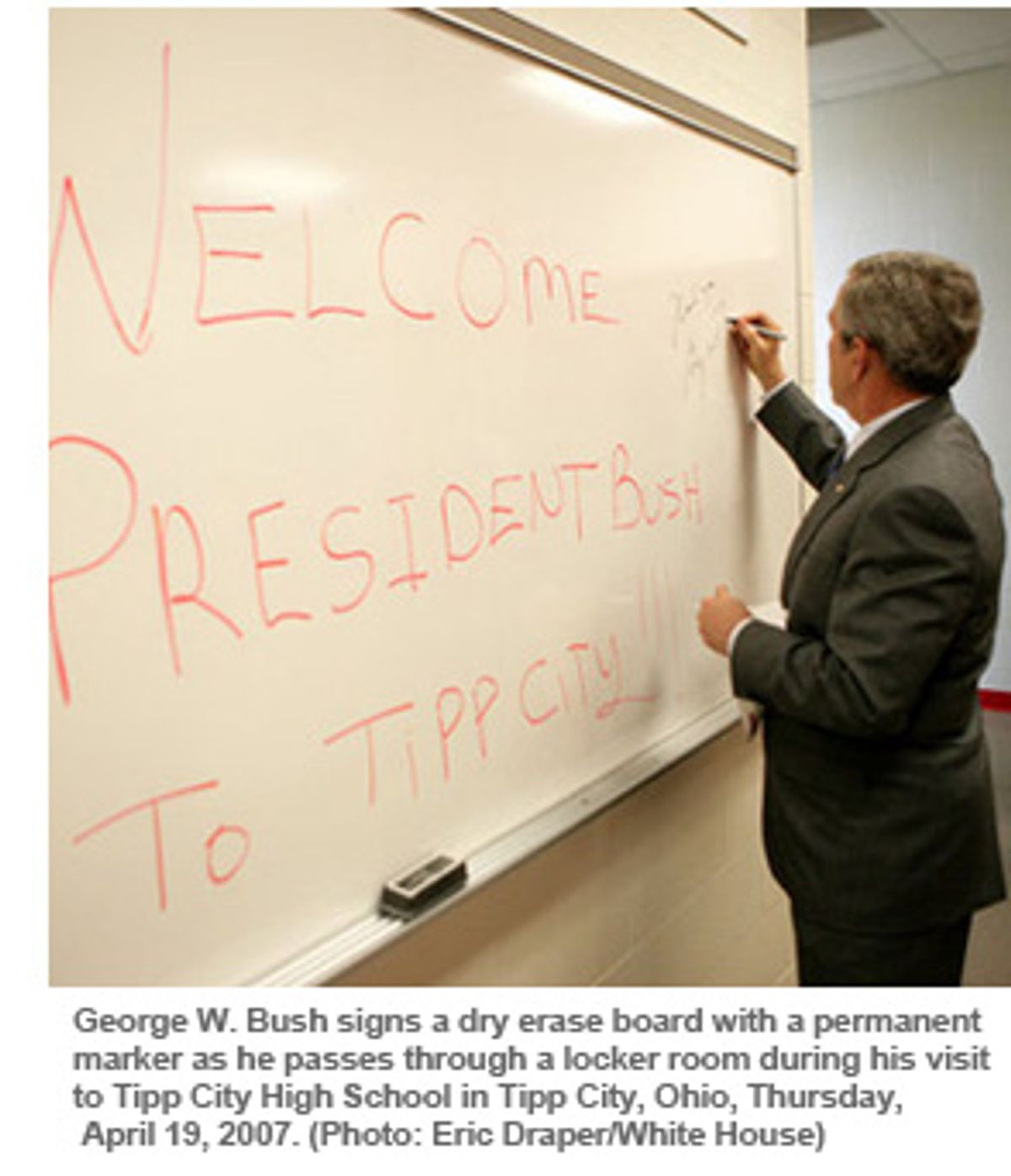 While the rest of us were watching Albert Gonzales flame out before the Senate Judiciary Committee Thursday, George W. Bush was talking about just about everything else imaginable at a high school in Tipp City, Ohio. Maybe he should have stayed home and watched TV instead. If he had, he might not have had his spokeswoman proclaiming him "pleased" with the attorney general's performance, and he wouldn't have found himself saying things like this:

On his marriage: "And I will tell you, one reason -- this may sound counterintuitive, but a good marriage is really good after serving together in Washington, D.C. It's been an amazing experience to be a husband and then a dad as president of the United States. I emphasize, that is the priority for me as the president. It's my faith, my family, and my country. And I am pleased to report that our family is doing great, particularly since my wife is such a fantastic person. And she sends her very best."

On his job and his rug: "My job is a job to make decisions. I'm a decision -- if the job description were, 'What do you do?' -- it's decision-maker. And I make a lot of big ones, and I make a lot of little ones. Interestingly enough, the first decision I made happened right before I got sworn in as president. I was at the Blair House, which is across the street from the White House, getting ready to give my inaugural address. And the phone rang, and the head usher at the White House said, 'President-elect Bush.' I said, 'Yes.' He said, 'What color rug do you want in the Oval Office?' I said, 'This is going to be a decision-making experience.'

"The first lesson about decision-making is, if you're short on a subject, ask for help. So if you're a student listening and you're not very good at math, ask for help. Don't be afraid to admit that you need help when it comes to life. I wasn't afraid to admit I wasn't sure how to design a rug, so I called Laura. I said, 'They've asked me to design a rug in the Oval Office; I don't know anything about rug designing; will you help me?' She said, 'Of course.' But I said, 'I want it to say something' -- the president has got to be a strategic thinker -- and I said to her, 'Make sure the rug says 'optimistic person comes to work.' Because you can't make decisions unless you're optimistic that the decisions you make will lead to a better tomorrow."

On his decision to go to war in Iraq: "The hardest decision a president makes is to ask those men and women to go into harm's way. My decision making was deeply affected by the attack of September the 11th, 2001. It was a -- it was a moment that defined a dangerous world to me with absolute clarity. I realized then that this country was no longer invulnerable to attack from what may be happening overseas.

"I realized that there is an enemy of the United States that is active and is lethal. At further study of that enemy, I realized that they share an ideology, that these weren't -- that the -- and when you really think about it, the September the 11th attack was not the first attack ... This enemy is smart, capable, and unpredictable. They have defined a war on the United States, and I believe we're at war. I believe the attack on America made it clear that we're at war. I wish that wasn't the case. Nobody ought to ever hope to be a war president, or a presidency -- a president during war. But that's how I see the world."

On the threats facing America: "A lesson learned was that, at least in my opinion, that in order to protect us, we must aggressively pursue the enemy and defeat them elsewhere so we don't have to face them here. In other words, if what happens overseas matters to the United States, therefore, the best way to protect us is to deal with threats overseas. In other words, we just can't let a threat idle; we can't hope that a threat doesn't come home to hurt us."

On the rug, again: "The goal [for Iraq] is a country that is stable enough for the government to work, that can defend itself and serve as an ally in this war on terror, that won't be a safe haven, that will deny the extremists and the radicals. I happen to think there will be an additional dividend when we succeed -- remember the rug? I'm optimistic we can succeed."

On success in Iraq: "If the definition of success in Iraq or anywhere is no suicide bombers, we'll never be successful. We will have handed al-Qaida 'that's what it takes' in order to determine whether or not these young democracies, for example, can survive. Think about that: If our definition is no more suiciders, you've just basically said to the suiciders, 'Go ahead.'"

On immigration: "It's in the interest of the country that people who are here be assimilated in a way that -- with our traditions and history. In other words, those who eventually become citizens be assimilated. In other words, one of the great things about America is we've been able to assimilate people from different backgrounds and different countries. I suspect some of your relatives might be the kind of people I'm talking about ...

On the problems at Walter Reed: "I'm watching our military very carefully. I love our military, for starters. And I want to make sure that during these difficult times, that we help them on their needs. One of my concerns is that the health care not be as good as it can possibly be."

On the polls: "You know, I'm -- I've been in politics long enough to know that polls just go poof at times. I mean, they're a moment; that they are -- let me put it to you this way: When it's all said and done, when Laura and I head back home -- which at this moment will be Crawford, Tex. -- I will get there and look in the mirror, and I will say, 'I came with a set of principles and I didn't try to change my principles to make me popular.' You can't make good decisions -- (applause).

"As I mentioned to you, this is a decision-making experience, and you cannot make good decisions if you're not making decisions on a consistent set of principles. It's impossible. Oh, you can make decisions, all right, but they're inconsistent. What I think is important is consistency during difficult and troubled times, so that people -- they may not agree, but they know where I'm coming from."

On the rug, one last time: "People get pretty tired of war, and I understand that. It's really important as we -- that we have a sober discussion and understand what will be the consequences of failure. As I've told you, on the rug -- the reason I brought up the rug was to not only kind of break the ice, but also to talk about strategic thought. The president's job is to think not only about today, but tomorrow."