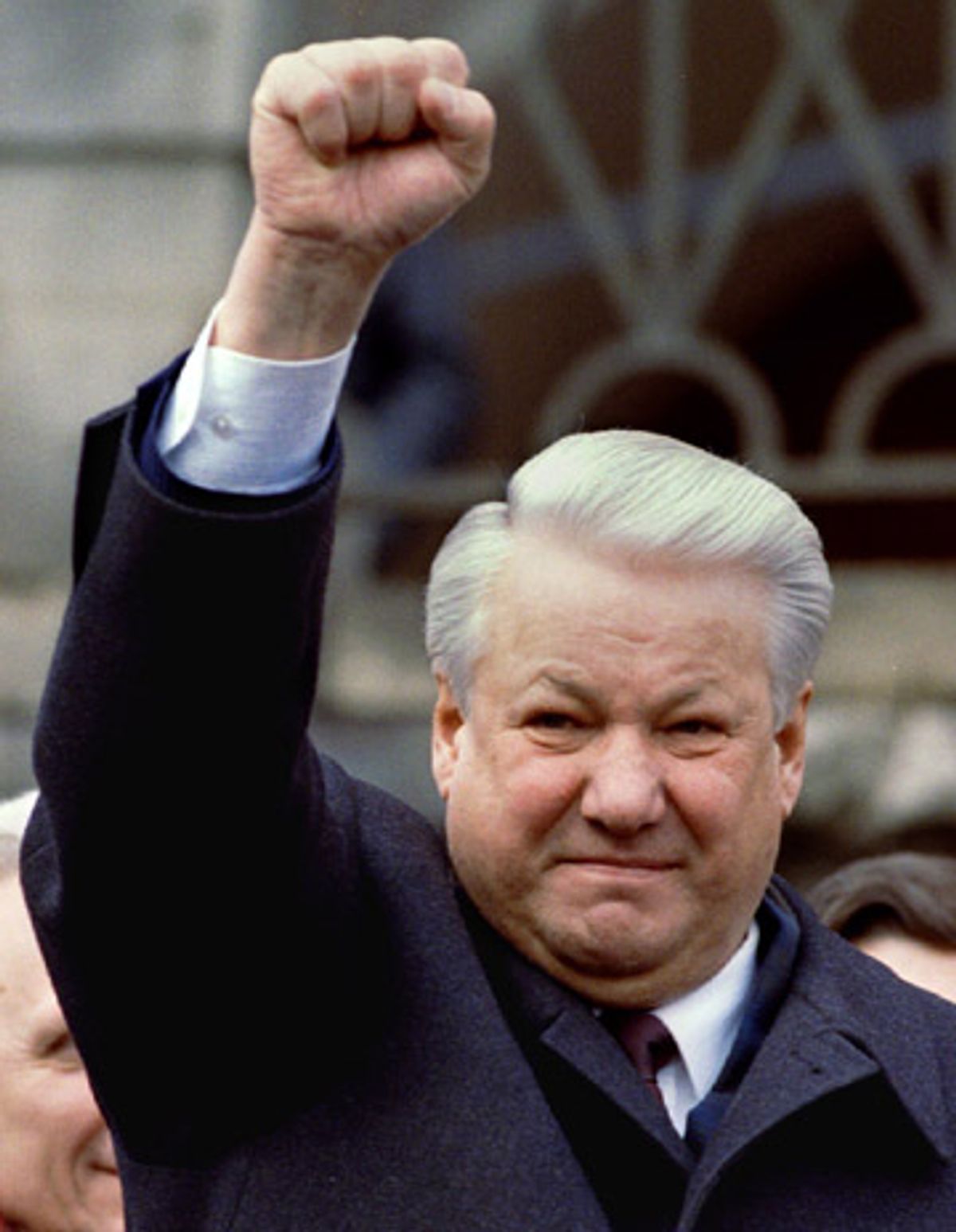 The disapproving look I got from Barbara Bush at a state dinner in honor of Russian President Boris Yeltsin. He was seated at the table next to mine and, thinking of my nieces and nephews and wanting to come up with some historic memento of the occasion, I asked Yeltsin to sign my menu card. Sitting next to me was the wife of James Billington, head of the Library of Congress and a renowned Russia scholar. When she saw what I did, she asked me to get an autograph for her husband. So I again defied the gods of protocol and approached Yeltsin. He graciously obliged. He was having a great time, and enjoying being the center of attention. When I caught Mrs. Bush's look, I felt a bit uncomfortable. But I was not sorry I had gotten the autograph, especially for the nation's top librarian. (Washington, D.C., 1990)

From "Front Row at the White House: My Life and Times," by Helen Thomas (Lisa Drew Book/Scribner, 1991)

On July 13, the day before I left for America, I was unexpectedly invited to meet with Boris Yeltsin at his office in the Kremlin. We talked together for an hour. I got the impression that he was even more interested in the religious side of things than Mr. Gorbachev. He did not hesitate to tell me that he no longer was a Communist. I thought he sounded pleased when he volunteered that his three granddaughters all wore crosses now. (Moscow, 1991)

I first met Boris Yeltsin in [presidential advisor] Brent Scowcroft's office back in 1990. At this point the administration was walking a fine line, trying to build friendly relations with the Moscow deputy without looking as if it were beginning to favor him over [Mikhail] Gorbachev. For that reason the President [George Bush the elder] wouldn't receive Yeltsin in the Oval Office itself. I had to go down to Scowcroft's office to get my first glimpse of this burly man with the thatch of white hair.

People in the White House, and especially those over at State, were skeptical of him. He had terrible image problems: there were plenty of reports that he was a drunk and incompetent, a great uncouth bear in the Khrushchev manner. "Very Russian" was Brent Scowcroft's assessment of him, and it wasn't meant as a compliment. But I liked Yeltsin from the start. He may not have had Gorbachev's polish, but I could immediately see how confident he was. During that short encounter in Scowcroft's office, he joked about the bad press we shared, and I was impressed at how briefed he must have been in order to know this. (Actually, my feeling was mixed with a bit of annoyance: was my press so bad that it made its way to everyone's attention?) (Washington, D.C.)

Max Hastings, editor of the Daily Telegraph. "Replacing himself"

One of the privileges of editorship is access ... the one-to-one lunches and dinners, the confidences from politicians, which give editors a thrilling window into power ... I attended one splendid affair with Boris Yeltsin, who came downstairs visibly drunk, and took an immediate dislike to his placement. He picked up his own table card, next door to that of Princess Alexandra, and deposited both the card and himself next to John Major, with whom he chattered amiably, if incoherently, all evening. (London, early 1990s)

From "Editor: An Inside Look at Newspapers," by Max Hastings (Macmillan, 2002)

The setting was an estate overlooking Vancouver's harbor, and the photo op was [Bill] Clinton and Yeltsin strolling through the forest ... The cold war was over, and this summit was about trade, investment, setting up a stock market, fighting crime ...

The person who was really losing his face that day was Yeltsin. He opened strong in his tête-à-tête with Clinton. "I liked him a lot, full of piss and vinegar, a real fighter," Clinton told me after the meeting, the first of several authorized clichés I would pass to reporters on background ...

But Yeltsin's form faded as the day wore on. That afternoon, I bumped into Martin Walker, the Washington bureau chief for Britain's Guardian newspaper. He said that Yeltsin had had three scotches on the boat ride to Vancouver Island -- on top of wine at lunch. At dinner, Yeltsin ignored his food and downed wine in single-gulp shots. [Secretary of State Warren] Christopher slid me a note during the second course: "No food, bad sign. Boat ride was liquid." By the end of the evening Yeltsin was extending his arms across the table toward "my friend Beeel," and I finally understood what people meant when they described a drunk as "tight." Yeltsin's skin was stretched across his cheeks in a way that nearly obliterated his features. With his slicked-back white hair, he looked like a boiled potato slathered in sour cream. (1993)

From "All Too Human: A Political Education," by George Stephanopoulos (Little, Brown, 1999)

In early March, Yeltsin and I agreed to meet on April 3 and 4 in Vancouver, Canada ...

I left Vancouver with more confidence in Yeltsin and a better understanding of the magnitude of his challenges and his visceral determination to overcome them. And I liked him. He was a big bear of a man, full of apparent contradictions. He had grown up in primitive conditions that made my childhood look like a Rockefeller's, and he could be crude, but he had a fine mind capable of grasping the subtleties of a situation. He would attack one minute and embrace the next. He seemed by turns coldly calculating and genuinely emotional, petty and generous, mad at the world and full of fun. (1993)

This first visit to Russia was intended to strengthen relations between Bill [Clinton] and President Yeltsin so that they could constructively address issues such as the dismantling of the former Soviet Union's nuclear arsenal and the expansion eastward of NATO ...

The Yeltsins hosted a state dinner ... I sat next to President Yeltsin, with whom I'd never had an extended visit, and he kept up a running commentary about the food and wine, informing me in all seriousness that red wine protected Russian sailors on nuclear-powered submarines from the ill effects of Strontium 90. I always did like red wine. (Moscow, 1993)

The White House protocol office asked ... me to greet Yeltsin when he arrived at Andrews Air Force Base ... I was then to accompany Yeltsin in his limousine to Blair House ...

As Yeltsin emerged from the plane and made his way down the mobile stairs, he was gripping the railing and concentrating on each step. His handlers did their best to block the view of the cameras recording his descent. He slipped on the last step and had to grab [wife] Naina's arm. That night at Blair House, Yeltsin was roaring drunk, lurching from room to room in his undershorts. At one point, he stumbled downstairs and accosted a Secret Service agent, who managed to persuade him to go back upstairs and return to the care of his own bodyguard. Yeltsin reappeared briefly on the landing, demanding, "Pizza! Pizza!" Finally, his security agents took him firmly by the arms and marched him briskly around in an effort to calm him down. (Washington, D.C., 1994)

From "The Russia Hand: A Memoir of Presidential Diplomacy," by Strobe Talbott (Random House, 2002)