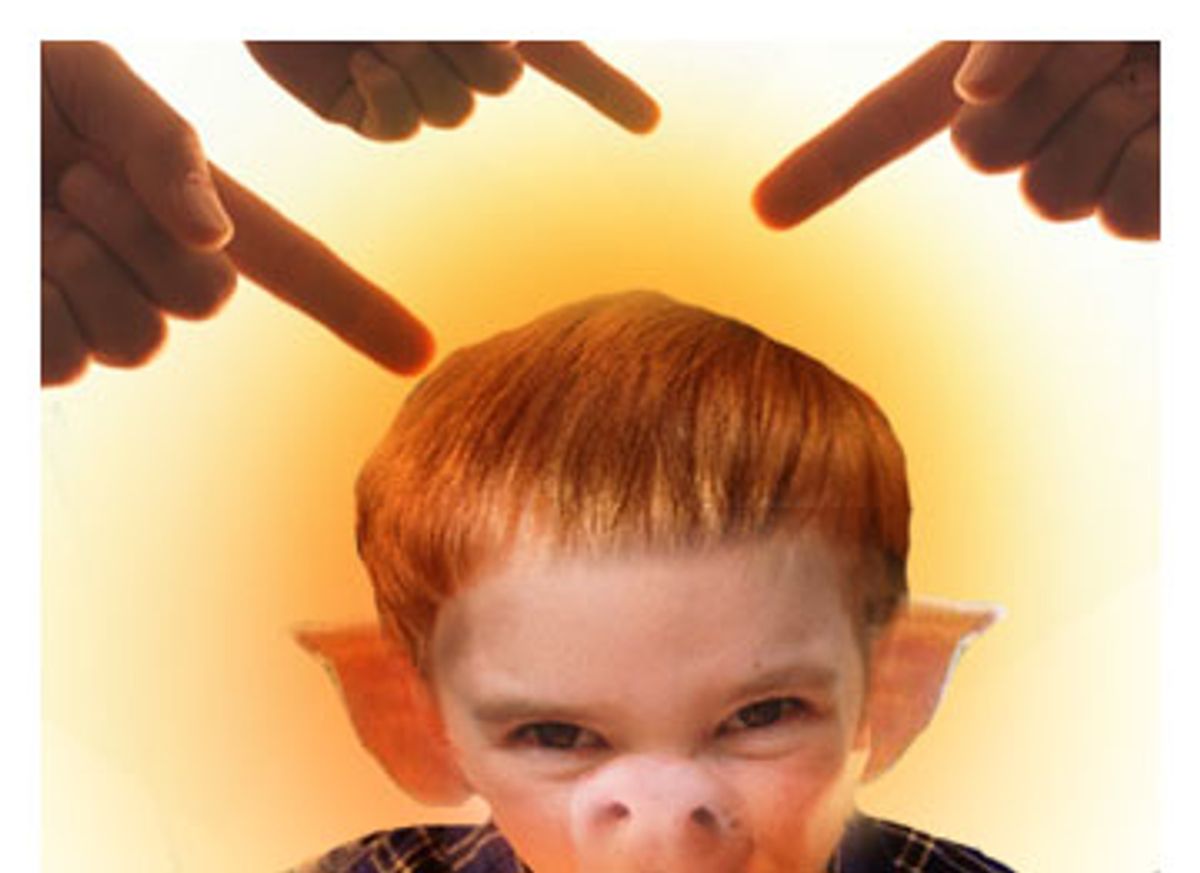 This little piggy went to a bunch of great parties,

This little piggy had a new hit sitcom on NBC,

This little piggy had none.

This rude, thoughtless little piggy cried, "Wee wee wee!" all the way to her publicist's office.

Last week, thanks to a voice mail Alec Baldwin left for his 11-year-old daughter, Ireland, leaked to TMZ.com, in which he calls her a "rude, thoughtless little pig" we learned three things: 1) Alec Baldwin can be a real dick sometimes, 2) his ex-wife, Kim Basinger, might possibly be the sort of nightmare parent who would leak private conversations to the press at her daughter's expense, and 3) name-calling is officially out of style.

While Basinger's publicist told journalists that "the voice mail speaks for itself," it's clear that there's more than one rude, thoughtless little pig in this scenario. Meanwhile, those of us who were raised by hotheads (who were, in turn, raised by wolves) scratched our heads and asked ourselves, "What's so wrong with name-calling?"

Time was when you could call your kid a lazy shit or a stupid jerk and get away with it. Remember those days? You know, back before the immensely powerful toddler lobby took over Washington and people became enlightened and informed and started treating their filthy little rug rats like foreign dignitaries. "Rude, thoughtless little pig" was mild talk in my family, the kind of thing you might hear when you forgot to take out the trash. For a few years when my older brother was in high school and looked just like Funky Winkerbean, my dad couldn't address him without using the word "weirdo," as in "Stop being such a weirdo and play a sport or something." The summer I turned 13 and started sporting fake Ray-Bans and listening to Blondie's "Parallel Lines" on a continuous loop in my Walkman, my dad referred to me as a "shallow dummy" at least as often as he said my name. If there were an army of spies with camera phones back then, we would've been ripped straight from the arms of our hotheaded parents and dropped into the nearest foster home before we were even potty trained.

I had a boyfriend whose father basically never called him anything but "little fucker" for most of his childhood, so I know I'm not the only one who was called names on a regular basis. Did it erode our self-esteem? Clearly not, since here I am, overconfident enough to be bloviating in these pages.

In the old days, when you used mean words instead of your fists, it was considered a triumph. The big debate among my mom's friends focused on whether or not it was really fair to hit someone else's kid on the ass with a wooden spoon or a belt when he did something bad. Spanking wasn't shameful back then, it was an important job that you needed tools to perform.

These days, you're not even allowed to use adjectives that might insinuate that a child is anything less than perfect in every way. A friend's kid came home from drama class one day complaining that the teacher had called him an idiot. My friend didn't like that. "What was he doing?" I asked. Turns out that, during an improv exercise, he was loudly insulting the actors' choices. An understandable reaction to bad improv, to be sure, but one that, if indulged, would basically render the whole class mute with self-consciousness. The instructor thought it better to hurl a well-timed insult, saving the other students from shame by shaming the idiot.

That seems like an important lesson for any kid, to me: If you don't want to be called an idiot, sometimes you have to stop acting like one. But today, everyone agrees that merely uttering these words is pure evil, that kids will always take their hotheaded parents' remarks personally, every single time, and their sweet little natures will be eaten away and they'll turn hard and mean and full of spite. You know, like me.

But if everyone is right about this new no-name-calling trend, you'd assume that our playgrounds would be filled with patient, amicable darlings. Instead, all I see are the same rude, thoughtless little pigs who were always there, still reenacting scenes from "Lord of the Flies." Only these days, the savages smack their own parents in the face, and all their moms and dads do is whisper diplomatic tomes on the pros and cons of maybe, possibly considering putting down that sharpened stick and thinking about possibly, maybe trying to resist the very natural and normal urge to impale that poor kid over there with it.

What happened to the furious mom who would appear out of nowhere and wrench her little punk's arm ruthlessly, yanking him out of his strike position and back to the sidelines for some stinging words and a few solid swats? The sharpened stick would be left in the dust by the swing set, and Piggy and Ralph would be free to roam the playground without fearing for their lives henceforth.

I don't mind that spanking is no longer considered a good time, but honestly, would it really kill anyone to hear "Stop it, stupid!" once or twice? How about "Quit it, you big jerk!"? OK, "Quit acting like a big jerk!" right? Because that way the kid isn't necessarily a jerk, he's just acting like one?

I don't know. Where's the fun in mincing words? Calling people mean names is like smoking -- first you can't do it at work, then you can't do it in public spaces. Now you're not even allowed to do it in e-mails or at sushi restaurants or even in the privacy of your own home, even though everyone there knows you well enough to know that you're just a temperamental dick. You'd think that if you grew up the way most of our parents did, raised by the so-called Greatest Generation who regularly got drunk and threw plates at their kids' heads, you'd have earned the right to utter a few choice, nasty words every now and then.

Sure, we all cringe when we overhear bad parents berating their children in ways that it's pretty clear will erode their self-esteem, and maybe even impede their ability to get out of bed in the morning for the rest of their lives. I'm not talking about those freaks, I'm talking about reasonably happy, witty, intelligent, mean-spirited hotheads. Remember when all parents fit that description, and they all went around chain-smoking and swilling coffee and eating cherry pie and complaining about their spouses and stopping for half a second to say something sort of biting and harsh to their kids? I miss them, damn it! When I hear Alec Baldwin's voice mail, I don't feel disturbed, I feel nostalgic for the good old days, when everyone was free to be a huge asshole from time to time without fearing expensive and lengthy litigation.

You're thinking, "I can't wait to read the letters for this one."