"We cannot stay as an occupying force in the Middle East"

Sen. Chuck Hagel talks about his presidential ambitions and why he sided with Democrats on Iraq. 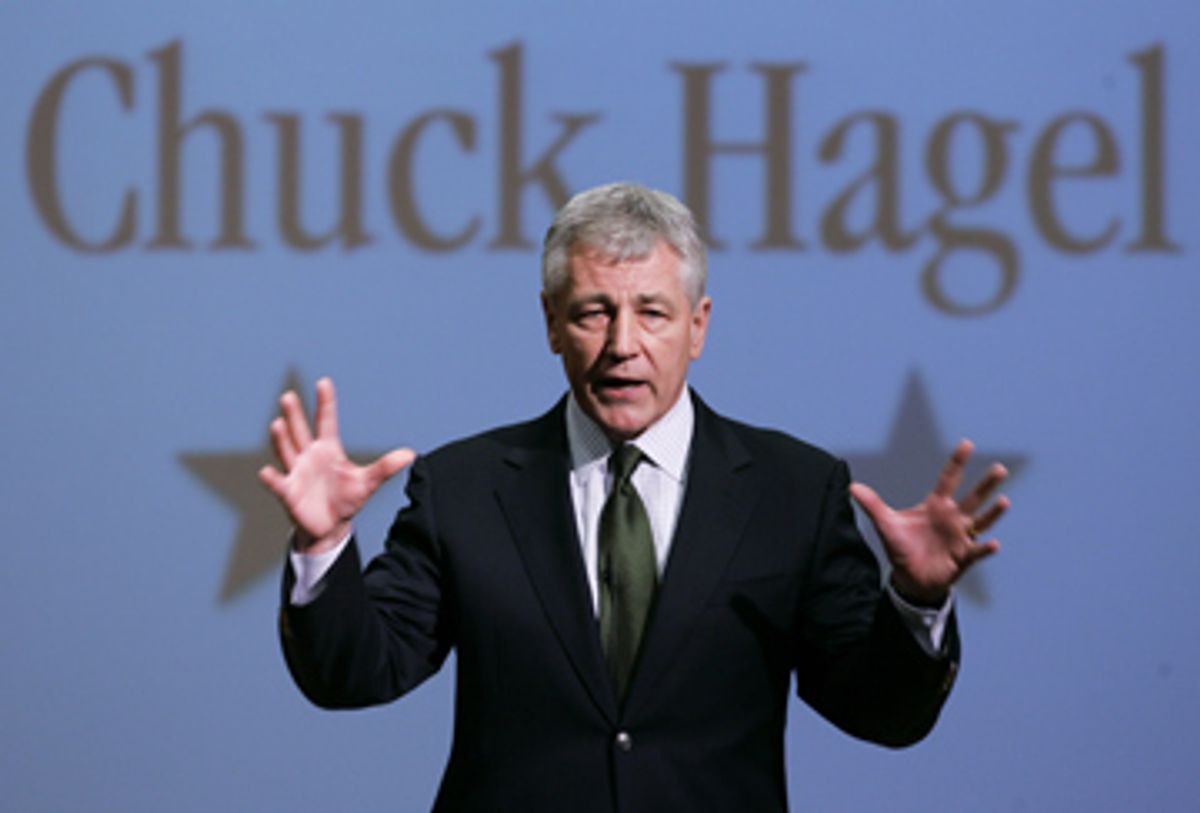 Nebraska Republican Chuck Hagel, who is otherwise a rock-ribbed red state conservative, has been called a "defector" and "defeatist" for clashing with President Bush on the Patriot Act, warrantless wiretaps and the war in Iraq. Most recently, he has inspired GOP ire by siding with Senate Democrats who want to set a timetable for redeploying troops from Iraq. On Thursday, Hagel again voted with Senate Democrats when they passed the final version of a bill that tied funding for the war with bringing soldiers home. Nebraska's Republican attorney general has said he is seriously considering challenging Hagel in the 2008 Senate primary because many Nebraskans were unhappy with the senator's criticism of the president.

In March, the decorated Vietnam veteran took abuse from another quarter, the miffed media, when he called a press conference to make his "non-announcement announcement" that he hadn't made up his mind whether he would run for the White House, seek Senate reelection or just quit politics in '08. The actions of the leading Republican war critic were called "bizarre" by one pundit and bordering on "flakiness" by another who was clearly unfamiliar with Hagel, who seldom makes a non-calibrated move.

Those who know Hagel best won't be surprised if he jumps into the 2008 presidential race after all. The people who grew up with him have no doubt that the White House has been his lifelong goal. His brother Tom, who fought alongside Chuck in Vietnam, feels it's a natural trajectory. "Chuck is one of the most focused human beings I have ever met ... It was like he had a game plan from the time he was 15 years old." Asked if Chuck plans to run, his other brother, Mike, says, "I know he wants to." According to Mike, Chuck Hagel said, "Why jump in so soon? People are going to be so sick and tired of everyone beating each other up."

During a recent interview in his Senate office, Salon asked Sen. Hagel about his presidential ambition, or lack of it, his position on the war in Iraq, global warming, and his feelings about the "defector" on the other side of the aisle, Sen. Joe Lieberman.

Why did you vote for the resolution giving the president the authority to use force in Iraq in 2002? Bob Graham [then a Democratic senator from Florida], read all the intelligence available, had doubts about the threat Saddam's alleged WMD posed and voted against the resolution.

That was not the reason I voted for the resolution. I wasn't convinced [of WMD] or in any way connected Saddam Hussein with 9/11. Before we even had the vote I said that. Some get the resolution wrong. It wasn't a resolution to go to war ... Ultimately it was giving the president authority to use force if all the diplomatic efforts fail. If there was no other recourse it would allow the president to use force. I believed the president and others who said they would exhaust all diplomatic efforts. Which they did not. They told us they would and they did not.

Let me finish my answer. The president is the commander in chief and I think it's smart to give him that if all the other pieces add up.

Why did you change your mind and vote for the Democratic-sponsored Senate bill that calls for a withdrawal timetable?

The Senate bill establishes goals for withdrawal. I felt after four years it has gotten worse by every measure. Our reasons for going in -- and they depended on the moment -- we changed the reasons many times. But we cannot stay as an occupying force in the Middle East, which is essentially what we are. All polls show that that's what the people of Iraq think ... The future of Iraq will be determined by the Iraqi people. It is a violent sectarian conflict fully complicated by an intrasectarian conflict. That's a civil war. To put American troops in the middle of that is wrong and to further escalate our military involvement is wrong.

What do you say to people who say you're withholding funds for the troops?

Senator Lieberman said that a vote for this measure would be viewed as a vote for defeat.

It cannot be viewed in a simplistic defeat or victory concept. That's totally irresponsible. There is not one member of Congress who is advocating defeat. We have a war in Afghanistan that's not going well, we're undermining our own interests in the Middle East, we've destroyed our credibility in the Middle East and around the world. We've destroyed military infrastructure that took 30 years to build, and it's getting worse in Iraq. To question the policy or go in a different direction is anything but unpatriotic. That's what we must do in a democracy.

I saw your angry verbal tangle with Lieberman on "Meet the Press" in January.

[Laughs] Joe and I are actually good friends. You can never take anything personally up here. I never have ... If there is someone up here I don't like, well, I won't tell you. You don't take your colleagues home every night for dinner or go on long vacations, but you take what you have here and make it work because every day is a new day. The person who opposes you today may be your greatest ally tomorrow.

How do you feel about being called "flaky" or a "defector"?

I've been called a lot of things in this business. You just do what you think is the right thing to do.

The media took you to task for what it called your "non-announcement announcement" in Omaha in March about whether to seek the presidency.

But I've got to do it my way and on my time frame. I was not ready to make an announcement on what I was going to do about my political future. Now, what expectations were built up was not my problem. I was astounded by some of the network garbage I heard a few days before my announcement. I heard that I was going to be running as an independent for president, that they knew "for sure" I was establishing an exploratory committee ... We never misrepresented. That's all I can do.

You are also taking heat from Republicans for challenging President Bush and for siding with the Democratic Senate supplemental bill that includes a timetable for troop withdrawal from Iraq. How do you see this affecting your future? And what about the future of the Republican Party?

First, as is always the case, when a political party has a president, that president is the leader of the party. And when that president is not doing well, with a very unpopular war -- two wars -- he drags the party along. The Republican Party is in great disarray. Conservatives are very upset that we built the biggest government in history since FDR ... That's not what most Republicans feel is the philosophy of their party. Deficits, big spending, more regulations, scandals, Libby, Foley -- so you've got a party in a lot of trouble.

How do you view the campaign for the presidency at this time?

McCain is now being shot down for his statements about Iraq being safer.

That's what happens when you're out there. You have all these cable and television shows. It's all about destruction ... It's all about destroy, destroy, destroy, bring the person down. I don't care if it's Hillary, Obama or John McCain. It's the fodder for the show. Keep bringin' 'em down, keep bringin' 'em down. Now if you're the front-runner out there, you're going to have to sustain all this for a long period of time.

You say, "This is the most fluid, unpredictable time in modern history." What do you mean?

Well, you've got this "Unity 2008," these independent things that are happening.

Does that interest you?

I don't know, that's something that's out there.

Would you run on a combined Democratic/Republican ticket, which is the Unity '08 concept?

Well, I haven't thought about it. I've been briefed on what it is ... I think that that could end up a very credible effort. It would be a ticket. The American people, whether Democrat or Republican, are so fed up with Washington. They think both parties are in the pockets of big labor, big government or some big entities and the little guy doesn't have as much of a voice. The lobbyists, the lawyers, the special interests are huge. This place is entangled with the web of special interest in both parties. It's gotten worse.

If you run you have to have money. How are you going to catch up?

I started raising money again. My focus was on my PAC. I give one of the highest percentages of my PAC money away. I raised over a million for other candidates. I started raising money and raised a quarter of a million in the last quarter for Hagel for Senate ... You can move that over to a presidential exploratory committee ... I'll make a decision later -- whether to seek a third term, whether to just get out or seek the presidential nomination.

Whom would you most want to run against?

i have admiration for all of them that are out there. Anyone who puts himself in that position deserves credit, whether you agree with them or not.

How and when are you going to decide?

You once told me your manhood was not tied up in this job and it wasn't your last job.

I hope it's not my last job ... But it is a privilege beyond any I could ever imagine to be a part of our country in this way. Arrogance is part of the business. Power is what drives a great deal of this business ... but in all that there are a tremendous number of very committed people, both Republican and Democrat.

Does it bother you when people try to pigeonhole you ideologically?

I'm a conservative, no question about it.

What about the "conflict of interest" innuendoes that continue to surface on blogs about you having a percentage in a company that owns one of the largest voting machine makers in the country, ES&S? ES&S is owned in part by the McCarthy Group, in which you still have a small interest, and the chairman of the McCarthy Group was your campaign finance director in 2002. Do you think you have to justify having an interest in a company that owns a large voting machine company?

I never had anything to do with ES&S. Anyone can say anything about anybody, including dishonest things. All you can do is give the facts, which are this: I had been on the board and at one time was chairman of American Information Systems [AIS, founded by Todd Urosevich. As of the 2004 elections, Todd Urosevich and his brother Bob owned Diebold and ES&S, the nation's biggest electronic voting machine manufacturers]. It was on my bio, my financial disclosure reports, everything. I resigned from that company, from that board, as I did all other boards, more than a year before I ran for office and never had anything to do with that company again. It was an Omaha-owned company that had nothing to do with ES&S. McCarthy & Co. -- the company I was president of -- owned a percentage of AIS.

Do you believe in global warming?

Did you read "An Inconvenient Truth"?

Did you see the film?

No. But I think Al Gore makes a significant contribution.