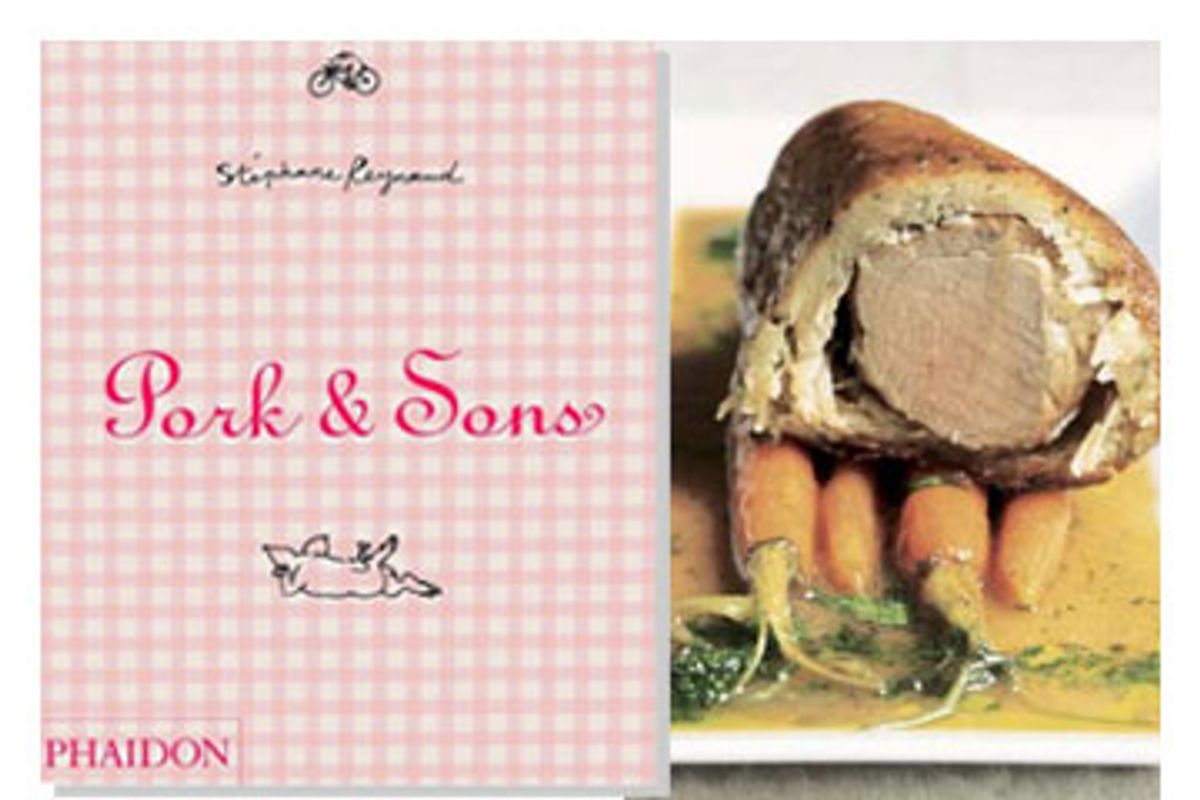 "You want a heart? We got them every day. Every part of the pig. We got the ears -- I keep 'em in the freezer -- we got the head ..." The butcher continued rattling off his inventory on the other end of the receiver, but I'd heard all I needed to hear.

I'd had swine on the brain for days, ever since "Pork and Sons," chef Stephane Reynaud's homage to all things hog, landed on my desk. Part cookbook and part memoir of his upbringing in the mountains of France among a community of butchers and farmers, "Pork and Sons" details the life and times of some very pampered pigs from youth to slaughter and sausage to saucier. The volume is already a bestseller in Reynaud's native country -- in 2005, it won the Grand Prix de la Gastronomie Française -- but the release of the U.S. edition feels right on cue, too: timed to coincide with both the lunar "Year of the Pig" and the porcine renaissance that has been sweeping the American culinary community. (Here in New York, a local chef was recently celebrated in the paper for serving a pork cocktail. Can we really still call it the "other white meat"?)

When they spotted Reynaud's book on my shelf, my colleagues groped it as if it were a Playboy bunny -- or rather a Playboy bunny bearing a box of glazed doughnuts. There was salivating; there was groaning; there were oohs, aahs and oh my Gods. Indeed, "Pork and Sons" is a perfect hybrid: slow food gone slick. For readers who get giddy over details of animal husbandry, Reynaud chronicles the ritual of pig killing with reverence and clear-eyed charm, tossing off bits of country wisdom like, "An animal is an animal and we don't shed tears over its fate" and "Business can't be done without a glass of wine." But for the casual bedside cookbook peruser, "Pork and Sons" offers plenty of other, less gruesome, delights. The publisher, Phaidon -- best known for its art books -- has produced a masterpiece of design, from the oversize pale pink gingham cover, gently padded like the flesh of a fatted hog, to the hundreds of full-color photos and the playful pig doodles that dot the pages. Still, I wondered, even as I admired it: Is "Pork and Sons" just porcine porn? Would the recipes -- so alluring to look at -- hold up in an ordinary kitchen? There was only one responsible way to determine the answer.

I would have to pig out.

Fashioning a representative test menu from "Pig and Sons" proved a greedy challenge: Should we start with an andouille and dandelion salad or pig's head and parsley pâté? Pork tenderloin or pork butt? And what about "Grandmother's pig's cheek bourguignon"? Back in Saint-Agrève, Reynaud has Eric and Aimé to fatten and flay his nest of trotters. But here in Brooklyn, N.Y., while we may adore the pig (just four blocks from my home, there is a very fine "pork store" whose door is guarded by a human-size hog in an apron), we tend to buy ours already bled and butchered. Would I have access to such bounty? Without knit-capped, ruddy-nosed Frenchmen to wake up at dawn and drink wine with me, would the true tastes be lost in translation?

My fears were unfounded; I may not have had knit-capped Frenchmen, but the white-coated fellas behind the counter at Los Paisanos, the local butcher, ably stepped into the breach. (Soapbox time: If you haven't already, go out today and find your local independent meat purveyor. There are still some out there; they need your business; and trust me, they will teach you more about your food than any schmuck at the supermarket.) Given the earlier phone conversation, I knew it would have an assortment of innards ready and waiting -- and sure enough, after a brief exchange ("I need 2 pounds of pig liver." "So ... you want 2 pounds of pork liver?" "Yeah, 2 pounds of pig liver." Semantics!), I was out the door with enough hog parts to feed a family of 10. I cleared my schedule, called up five friends and told them to set aside Saturday afternoon for some serious eating. I then barricaded myself in the kitchen, hereafter known as "the pigpen."

Dessert
Pineapple upside-down cake with homemade olive oil ice cream and candied bacon
(A dish inspired by, though not included in, "Pork and Sons")

Anticipating pork-induced exhaustion, I started at dessert and worked my way up the menu, slicing the pineapple and stirring the custard base for the ice cream before bedtime on a Friday, and waking up on Saturday to trim the tenderloin and set out my mise en place. Readers, I won't lie. I'm about as unflappable as an eater gets -- and my omnivorous parents made sure I acquired a taste for the quinto quarto in early childhood -- but those enormous pig livers were not a sight (not to mention, smell) I welcomed before my coffee.

Once I steeled myself, though, I was pleasantly surprised by the ease with which I proceeded through Reynaud's recipes. Many charcuterie-heavy cookbooks are intimidating, laden with advice about gadgets and grinders, and it's easy for a sometimes-impatient cook (like me) to lose her excitement navigating the intricacies of weights and measures. But Reynaud's ingredient lists are simple, and his instructions commands, not narrations. If you substitute a sage sausage for a sweet Italian, no one's going to scold you.

Of course, there are downsides to the impressionistic approach too, as any cook who has ever had to toss out a whole dinner course can tell you. When disaster comes, it's hard to know whom to blame: Is it that you failed to follow along, or was there too little to follow in the first place? All I know is that I have had liver -- well, duck and calf's liver -- many times, and I can make a mean chicken liver pâté. But the liver and wine-gelatin parfait I produced using "Pork and Sons" was one of the saddest, scariest things ever to emerge from my kitchen. My guests, loyal friends to the last, choked it down with wan smiles, but while one spoonful was intriguing, the second was retch-inducing. From the page of the cookbook, the photo had beckoned, an herb-flecked trifle, a glossy and iridescent mahogany. On the table, however, even the festive wine goblets in which I served it couldn't make it look appetizing. Remember the color you'd get in kindergarten when you mixed all the paints together? Now imagine that, but covered with some "Ghost Busters" ectoplasm. The only course of action was to cut short our suffering and send the whole thing swiftly back to the pigpen's slop bucket.

Thankfully, the parfait incident was the only blot on an otherwise perfectly lovely meal. The lentils were springy and the sausages herby, the tenderloin rosy and the mushrooms juicy and as fragrant as wet wood. And so, since Stephane Reynaud has three generations of piggy know-how and an acclaimed Parisian restaurant to his name, and I have only an endless appetite and enthusiasm, I'm willing to defer to his expertise. (However, a note to Reynaud: Holy cow, that pineapple upside-down cake was good. Maybe a book of desserts next?) In the kitchen and on the tongue, "Pork and Sons" proves itself more than just porcine porn -- and alongside other classics of the genre, like Fergus Henderson's "The Whole Beast: Nose to Tail Eating" and Michael Ruhlman's "Charcuterie," more than earned itself a soft, pink place in my heart.