Keri Russell and her castmates serve up some down-home good movie in this retro fable of infidelity and self-reinvention. 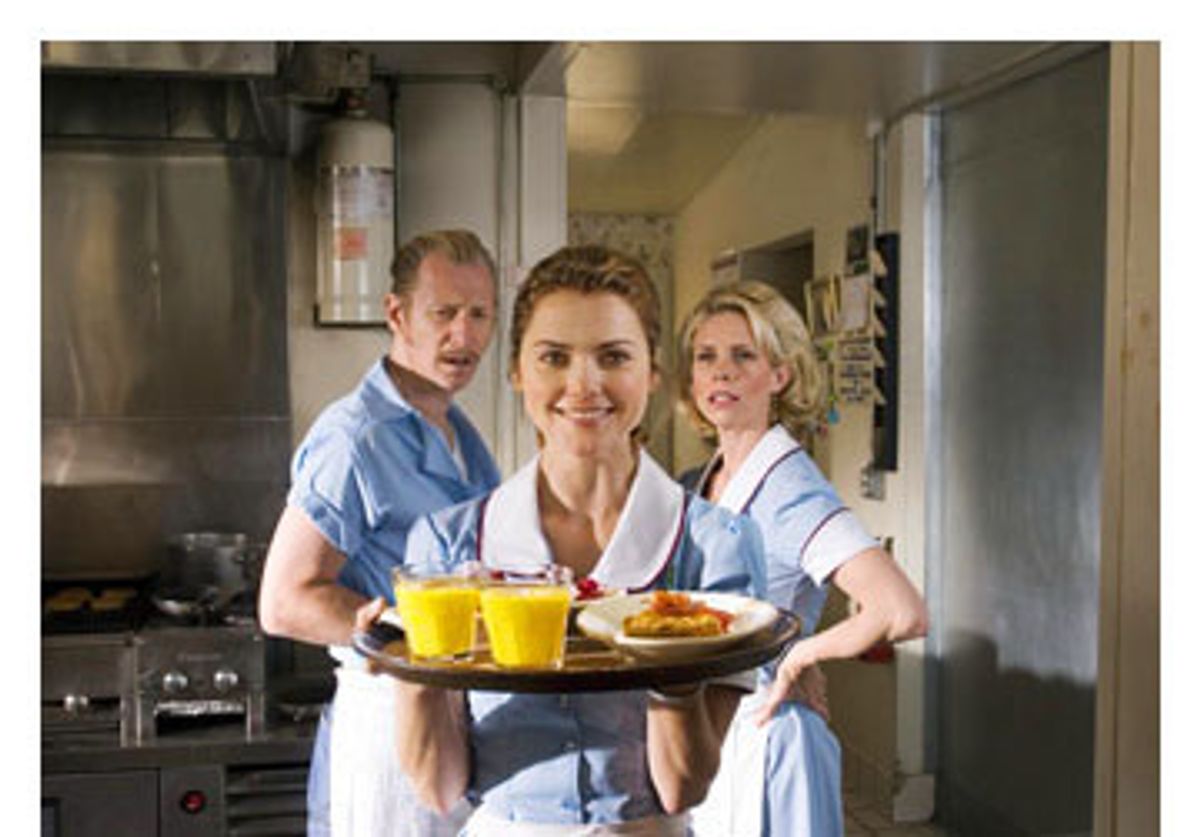 There are times when the spirit of a movie is enough to get you gliding over its obvious flaws. "Waitress," which was directed by the late Adrienne Shelly, is one of those pictures. The movie takes place in a mythical somewhere-in-the-South town, a place of cozy diners and old-style buses adorned with '50s-deco lettering, with not a strip mall in sight. Jenna (Keri Russell) is a waitress at one of those cozy diners; she's also its resident "pie genius," with a knack for inventing desserts with sassy, evocative names -- names that mirror her own feelings about her life at a given time -- like the "I Hate My Husband Pie" and the "I Don't Want Earl's Baby Pie."

Jenna does hate her husband, whose name is Earl (Jeremy Sisto), and she most definitely doesn't want to have his baby. Earl is a controlling bully; he's verbally abusive; he believes having sex is his right as a husband; and he makes no effort to talk to or understand Jenna. But one day she realizes, to her dismay, that she's pregnant. Her regular doctor has suddenly retired, and the new OB-GYN in town is Dr. Pomatter (Nathan Fillion), a jittery, awkward dreamboat, and Jenna isn't sure she likes him so much. Or maybe she likes him too much. Back at the diner, she describes him to her waitress friends, the adventurous, flirtatious Becky (Cheryl Hines, of "Curb Your Enthusiasm") and the shy, sweet-spirited Dawn (Shelly), as a "weird guy -- nervous -- from Connecticut."

What follows is a surprisingly unpreachy story of infidelity and self-reinvention, as well as of an unwanted pregnancy that blossoms into unexpected love. But it takes a while for this ultimately sweet little picture to find its footing: At first, it's all a bit too sweet. Shelly goes for a gentle, folksy vibe, and sometimes the result is just forced whimsy. When a nerdy suitor, Ogie (Eddie Jemison), first shows up to court Dawn, his cartoony gestures and semicrazed smile feel overly exaggerated. But Shelly is able to guide the movie, and Ogie's character, so that he grows on us (as he does on Dawn). He gazes at her, a pert, redheaded mite in rhinestone-trimmed cat's-eye glasses, and declares, with poetic earnestness, "If I had a penny for everything I loved about you, I'd have many pennies."

Shelly also wrote the script for "Waitress," and the dialogue, as well as the shape of the scenes, has an elliptical feel that's reminiscent of the work of Hal Hartley, the director who gave Shelly her start as an actor. (Her first roles were in the Hartley movies "Trust" and "The Unbelievable Truth.") The picture's off-kilter rhythms ultimately keep it from being too treacly, and its spirit of optimistic negativity doesn't hurt, either: This is a movie about the just-getting-byness of life, but it's also about the way crap situations often contain threads of potential happiness, if you can just tease them out. Shot in candy-sprinkle colors by Matthew Irving, it feels vivid and alive.

Shelly has directed several other pictures -- among them the 1999 "I'll Take You There," with Ally Sheedy -- but "Waitress," a hit at Sundance and now arriving in theaters just a few months after her sad and untimely death, seemed poised to be her breakthrough. The picture's tone is a bit wobbly in places, and there are sections that stretch the boundaries of credulity, even for a story that's essentially a fable. Still, "Waitress" gives us the sense that Shelly might have gone on to do so much more; that sense of promise -- and of a life -- cut short makes watching "Waitress" a bittersweet experience. Her actors here give lovely, relaxed performances. Russell, with her heart-shaped, Victorian valentine face, has just the right amount of sweet tartness; she never steps over the line into that dreaded territory of "spunky." Her scenes with the crotchety but plain-talking diner owner, Old Joe (played by a sly, cantankerously charming Andy Griffith), have a pleasingly natural, unrehearsed quality.

And Fillion -- best known for his role in the Joss Whedon futuristic western "Serenity" -- is wonderful here. Fillion's sideways line delivery resembles that of another terrific actor associated with Hartley, Martin Donovan (Shelly's costar in "Trust"). Like Donovan, he has a way of placing an extra beat where you least expect it. When Jenna, trying to make friendly chitchat, asks him if he likes the neighborhood he lives in, he replies, "Yeah, it's nice -- if you like trees." An em dash later, he blurts out, "And who doesn't like trees?" Fillion, with his wide-set eyes and cautious smile, has the face of an anxious space alien. When he looks at Jenna, his patient, he's clearly lost in the possibility of a swimmy romance that breaks all the rules. "Waitress" is about what we do to survive, and about how, sometimes, we surprise ourselves by turning survival into the fullest kind of living. It's an openhearted picture, an unintentional goodbye that feels more like a beginning than an ending.