Taking it off for peace

A new documentary asks whether uniting Israeli and Palestinian women around weight loss is the way to lasting peace in the Middle East. 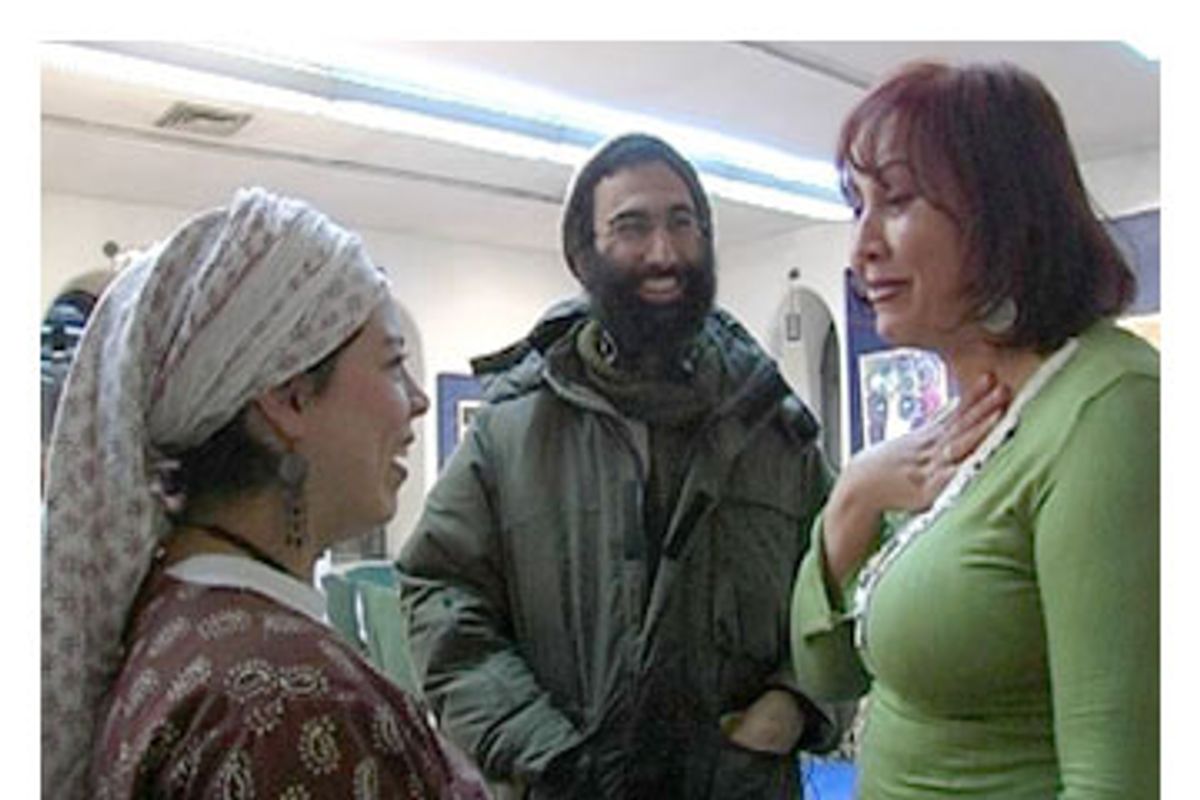 Can the united struggle of 14 women of widely varying backgrounds to reduce the width of their waists advance peace in the Middle East?

That's the question filmmaker Yael Luttwak asks in her new movie, "A Slim Peace," which had its world premiere last week at the Tribeca Film Festival. Luttwak -- who is half-Israeli, half-American, and now lives in London -- was working with Palestinians and Jews in Israel, and trying to lose some weight herself, when the peace process broke down in 2000. "Something in my head just connected the two," she says.

To pull together the disparate group of women for her documentary, Luttwak solicited strangers in cafes and surveyed friends and friends of friends, including secular urban Jews, religious Jewish settlers, Bedouin Arabs, Palestinians -- young and not so young, well-off and less so. The women met regularly in Jerusalem, some of them traveling past checkpoints, an hour and a half each way, to bond over their body issues, and maybe -- just maybe -- find common ground.

At first, sitting around a circle with two dieticians -- one Israeli, one Palestinian -- the women are tensely polite to one another. But as the meetings progress, inhibitions are shed along with the weight, paving the way for angry confrontations and, ultimately, a tentative détente.

Luttwak sat down with Salon in New York to discuss her film, her process and her fierce belief that peace in the Middle East is at least as attainable as losing those last five pounds.

Did you make this film with a particular goal in mind?

I was really passionate about making this film. I believe in peace. I care a lot about the Middle East. I care about the fact that Israelis and Palestinians are continuously killing each other, and I'd like that to stop. I wanted to see what would happen if we brought them together over something as universal as weight loss -- because who doesn't care about their weight? Could they come together on something as neutral as that?

Where did you get the idea to marry weight loss and the peace process, two things that one doesn't normally think of as fitting together?

It came from my own personal life. I have always struggled with my weight. And I've seen a lot of women around me struggle with it. It's not that I'm obese -- though I've never been stick thin -- but I've always felt a little chubby. I've always had my own body issues. I think it's hard to find someone who doesn't.

So when I lived in Israel, and I was working with Israelis and Palestinians, I lost 10 kilos, or 20 pounds. I went to Weight Watchers, and I sat in these meetings and I saw these Middle Eastern women -- and they're so full of life and spice. And it's all so intimate, because weight has so many emotions attached to it. It's so loaded. There's success and there's failure and there's pain. Then at the same time, in 2000, the peace process broke down -- and it's never been repaired since. So something in my head just connected the two.

You assembled the group of women in the film. What sort of characters were you looking for?

I wanted to bring together women that would never be willing to meet. I didn't want to do a weight-loss group of rich Israelis and rich Palestinians who were already liberal and who were for peace. I wanted to go as far as we could.

It was very important to me that it be a program that the women would benefit from, too. They're opening up their personal lives and sharing of their lives and their bodies and their families. So I got amazing dieticians, luckily: the head of nutrition at Hadassah Hospital, Israel's premier hospital, and a Palestinian dietician, who is amazing in her own right. It's a new approach in that it's not about dieting. Diets don't work, based on research. It's about changing the way you relate to food and changing your lifestyle. We had a lot of weight-loss success stories.

In terms of the peace process, there didn't seem to be that much direct conflict in the group, but there was a sort of pervasive tension.

I think that's a great observation -- and it was my observation as well pretty early on. You may be bringing together women who would never normally meet, but they don't sit in a room and start hitting each other. They were very polite, which is very unusual, because in the Middle East people are not that polite. They're usually known to be maybe a little aggressive, certainly less inhibited, very casual. So everyone was on their best behavior. The tension was much more subtle. As Ichsan, the Palestinian woman, says, "It's like we're on a blind date."

But then, of course, when Hamas was elected, there was an out-and-out argument. Weight loss went to the side and the discussion became about politics. The big thing for me was that the women came back after that meeting. They had this big fight -- a true argument, a screaming match -- but they came back. And that was the testament. But I think that also reflects reality and people. When you have a fight with someone -- whether it's your best friend, your lover, your brother -- you have a fight and it's healthy and you get it out. Then, if you care enough about that person, you come back. And they did.

There's a scene between the spitfire Palestinian woman, Ichsan, who may be the most compelling character in the group, and Dasi, the Israeli yoga teacher whose father-in-law was well known in the Israeli independence movement. They become friends, but when Ichsan goes to visit Dasi at her home in a well-to-do part of Jerusalem, things sort of blow up between them. What happened there?

They asked me to turn off the camera. As a filmmaker I would have wanted to have kept the camera on, but as a human being who follows the rules, I turned it off. Because they really fought. I think you see that it's uncomfortable. And you see Ichsan at the end and she is left alone. So I believe that the audience understands what happened.

Also, we've seen arguments before. So, in some ways, it's banal. What's interesting is these characters and the subtleties, the nuances. This is a case where you have two people who get along really well. As human beings, they have similar senses of humor, similar ways of operating in the world. They're very fun, feisty women. And then it hits them. They completely leave the headlines and see each other as people -- and then they go back to the headlines. They recognize this is too big for us, this gap that we have. And that's what I think you see.

It's a pretty disappointing moment. Did the friendship -- which was really the strongest one between any of the women of different backgrounds -- cool off after that?

At one point in the film, Aviva, an Israeli woman, says she feels like she has far more in common with the Palestinians in the group than the Jewish settlers, most of whom are American. It suddenly became clear that the group could be divided along all sorts of lines, secular and religious, well off and poor. It wasn't just Jews vs. Arabs.

Life is complicated. We all know it's not black and white, though we always seem to go there. Was I surprised that certain women didn't get along and others did? Yeah. I was surprised about a lot of things. But I'm not surprised about the fact that a secular Israeli gets along better with a Palestinian than she does with an American settler. They have a lot more in common. That's the whole problem, I think. If only Israelis and Palestinians were a little more different. If only they were like Asians and Swedes, I think we would have a lot less problems. It's because, I think, they are originally cousins -- because they talk similarly, they like the same foods, they move similarly, they have very similar mannerisms -- that they have conflict like families have. I was really glad that Aviva expressed that, because that's a voice I don't think we hear very often. I really don't think you hear from the secular Israeli who just wants to live, to do their thing.

The group you pulled together was all women. What do you think the role of women in the peace process is? Are women particularly equipped to forge peace?

I've given that a lot of thought. The reason why I wanted an all-women group is because, according to research, support groups, weight-loss or otherwise, are slightly more intimate if they're single sex. I wanted to create a group that would become intimate. I needed to raise the stakes.

I chose all women partly because I'm a woman, but I also believe that the reason that there is conflict, that people are aggressive toward each other, is because they're fearful of each other. And why are they fearful? Because they've hurt each other. On a simple level, when someone hits you in the face, you become fearful that they'll hit you again. So you put up a barrier, you put up a wall, you take a gun, you put on a mask, you have soldiers. For some reason, I think women are able to react in a less aggressive way. They'll sit down. They'll eat together. They bear children. It's sort of a simplistic answer, but it's my simplistic answer.

Was there ever a moment that you felt frightened? You went into some areas that someone with your background wouldn't normally journey into. I'm thinking specifically of Ramallah. How did you feel going into those areas?

Listen, I didn't tell my parents every time I went into Ramallah. I didn't share all the details of all my travels, because I know that people get scared. But it's fear of the unknown. It's fear of just not being in a place where everybody is like you. But once you realize they're people, you're people, it's fine. The first time I went into Ramallah, it was like anything -- the first time you ride a bike, the first time you eat anchovies, you don't know, it's unknown. You don't know what it's going to feel like, you don't know what it's going to taste like. It's the same thing. But you shouldn't let that stop you from exploring the unknown. Your world might become totally different as a result.

Is that a takeaway message from the film?

I don't want to give a takeaway message. And I'm certainly not interested in manipulating anybody that goes to see the film. But I'm very passionate that we can have peace in the Middle East. I really believe it. It's just our own minds that stop it. I think what it can show is that when you do bring people together, people that for thousands of years have hated each other, within a few hours walls break down. It's possible.