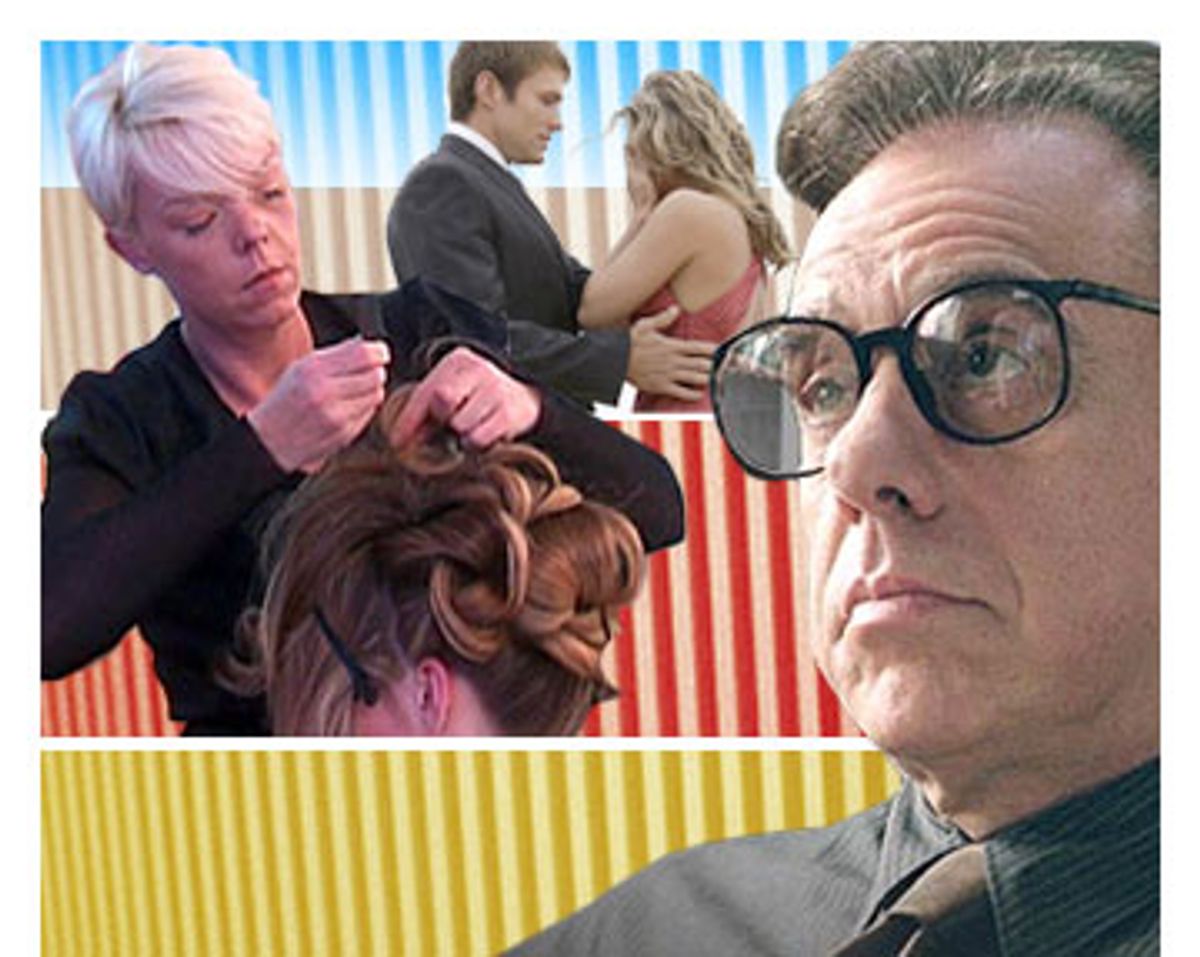 A few years ago on a plane trip, I sat through an otherwise forgettable romantic comedy that had an unexpectedly unconventional ending. Instead of getting the girl and the big promotion, the protagonist, played by Topher Grace, realizes that everything in his life is based on greed and lies. So he dumps the girl (who was way too young for him anyway), quits his job (where he used sleazy tactics to get promoted) and moves out West to find himself.

As the credits rolled and I sat marveling that such a flat yuppie tale would end in such a refreshingly unpredictable way, the young guy seated next to my husband turned to him and said, in a disappointed tone, "Man! I really thought it was gonna work out for that guy."

And Bingo was his name-o
But you can hardly blame the kid. If all it took to be happy in this crazy, mixed-up world was to dump your girlfriend, quit your job, hop in the car and drive west, then California wouldn't be filled with therapists and plastic surgeons. Sadly, Americans aren't quite as happy as they sound on the radio, no matter how many Toyota-thons they have planned for this weekend. That's why, whether we're at the movie theater or the massage parlor, we want our happy endings, damn it, and we want them now.

What else explains the impending premiere of ABC's "National Bingo Night" (9 p.m. on Friday, May 18) -- or "NBN" as ABC so optimistically calls it? Yes, that's right. Bingo. On TV. What people really want right now is a game specifically designed to excite and delight invalids: Bingo!

If ever there were proof that the human race is devolving, just like the band Devo predicted, it lies in the trajectory of game shows over the past few years. First there was "Jeopardy." Then there was "The Weakest Link" and "Who Wants to Be a Millionaire?" Then people for some reason felt cheered by big metal suitcases filled with cash, handed out by a bald Howie Mandel. Then there was William Shatner and a phalanx of dancing girls to flirt with. Then there was the gaggle of smartass fifth graders, ready and willing to condescend to the poorly educated yet sassy adult contestants who weren't sure whether the sun revolved around the Earth or the moon.

And after that, there was a brief lull. What would come next? Ru Paul and a truckful of transsexual midgets? Dennis Hopper and a flaming pyramid of angry rats? Tom Selleck, standing waist-high in a vat of tapioca pudding? Please?

No. Bingo, my dears. Bingo, Bingo, Bingo was his name-o. The ABC Web site says that its show will be "fast paced" with "high stakes" and invites the viewing public to join along. But how will the producers dramatize it? Yes, we can picture the massive bingo balls. That part is easy. But what else? Dry ice? Banging drums? Regis Philbin? A 32-piece symphony orchestra? Nastassja Kinski in a sequined bear suit, picking the numbers? I've got it! Maybe the bingo balls could roll down a long, skinny passageway, and Harrison Ford could narrowly escape each one, then crack wise about it with some natives in feather boas standing nearby.

But how do you build suspense, or delve into each player's strategy? Maybe Regis could whisper conspiratorially at a hand-held camera, "It looks like she's going for that card, Nastassja. Hmm. Interesting choice. No, I was wrong, she picked the other card!"

Anyway, I'm glad that ABC has given up on catering to dumb, melodramatic girls so they can pander to its real target demographic: children under 6, old people over 90 and anyone semiconscious, bedridden or distracted enough to be transfixed by ... Bingo! Oh my God! I've got bingo! I love this game!

Saturday night's all right for fighting
While we're tackling such clichés as "Americans are stupid" and "Americans like happy endings" and "Tom Selleck has a thing for getting naked and frolicking in tapioca pudding," we might as well tackle the most oft-repeated mantra about television over the past 30 years:

Most of us have uttered these words many, many times. Perhaps you found yourself scratching your head quizzically at the meandering antics of two guys in a bar with crappy Irish accents, or maybe you fell asleep during a sketch in which Jimmy Fallon and Horatio Sanz dressed up in funny outfits, then fell down and giggled at each other for five long minutes. (No, I'm not talking about the "Jarret's Room," the occasionally funny sketch in which Sanz and Fallon are college kids with a webcam.)

When NBC announced its special, "Saturday Night Live in the '90s" (9 p.m. on Sunday, May 6), I thought, "What are they going to show, aside from Phil Hartman as Bill Clinton. Dana Carvey as George Bush, 'Wayne's World,' Mary Katherine Gallagher, the Spartan cheerleaders ..." Yes, the list goes on and on. While most of us are so conditioned to bray loudly at "Saturday Night Live's" dry spells, the show churns out a pretty remarkable flow of good material. We don't notice because we're too busy mythologizing those gloriously odd moments of John Belushi in a bee costume, or daydreaming about Carrie Fisher and Belushi cracking wise and snorting blow backstage.

Of course, those are the kinds of daydreams that can get you killed -- just look at Chris Farley, the guy whose comedic talent really stands out in the show's clips, even among contenders Mike Myers, Chris Rock and Will Ferrell. It would be great to be able to compare the best sketches from these comic giants, but unfortunately there aren't enough clips on this show, which mostly features commentary by past cast members. The behind-the-scenes talk is reasonably interesting, but personally, I'd rather see more of the sketch where Mary Katherine Gallagher falls into a pile of folding chairs, or a few "Wayne's World" sketches, not to mention "The Chris Farley Show" and Hartman's Unfrozen Caveman Lawyer.

The greatest hits from the '90s might make you bemoan the current state of "SNL" even more loudly, but let's not forget some of the better sketches of past few years: Will Forte as the Falconer, Maya Rudolph as Donatella Versace, Rachel Dratch as the Girl With No Gaydar, Darrell Hammond as "Hardball" host Chris Matthews. (Is it possible to watch that show without thinking that Matthews is doing a bad impression of Hammond?) Right now, I enjoy most sketches with Forte or Rudolph, I love "The Prince Show" with Fred Armisen, and I never want to miss Kristen Wiig as the Target Lady.

As easy as it is to proclaim the skits on "SNL" unfunny, whenever they have a seriously weird flavor and an extremely high level of commitment, the show is moving in the right direction. When "SNL" is truly hitting a dry spell, the writers don't have the confidence to go with a sketch that's built around a woman with a funny voice who works at Target. This season hasn't blown anyone away, sure, but you certainly can't argue with the show hosted by Justin Timberlake, which featured classics such as "The Barry Gibb Talk Show" and the Andy Samberg parody of cheesy '80s-era music videos, featuring a very special gift.

Anyway, if being funny were easy, there would be five other well-nigh-hilarious sketch shows on TV right now, and YouTube would be overflowing with pure comic brilliance produced by the common man. Sadly, though, when I spent a lot of my time looking for funny stuff for Video Dog, aside from the occasional glimpse of real talent, the big laughs came from videos of puppies attacking each other.

Actually, send me a link to the single funniest video you've ever seen online right now, and next week we'll feature the first annual "I Like to Watch" Comedy Festival. And if you know any good jokes, send me those, too.

We don't need another "Heroes"
That's right, all it takes to start a festival is one stupid idea. And all it takes to be a superhero is one stupid ability: Stop time, fly, blow shit up, read minds. What I really want are practical superpowers: I can burn toast with my eyes! I can heat up leftovers with my mind! I can change my withholding allowances for the 2007-2008 tax year just by snapping my fingers!

A few weeks ago, I wanted to snap my fingers and make "Heroes" (9 p.m. Mondays on NBC) disappear. I was bored with saving the cheerleader and saving the world. I was tired of Mr. Bennet (Jack Coleman). I no longer felt any affinity for Peter Petrelli (Milo Ventimiglia). I particularly hated Niki and Jessica, the dual personalities battling inside of Ali Larter. Overall, I didn't feel invested in the story and didn't have much of a connection to any of the characters on the show, aside from the always-charming Hiro (Masi Oka).

One NBC "Heroes" marathon later, I'm hooked again. After a brief lull in the wake of cheerleader Claire's (Hayden Panettiere) salvation, the story has really bounced back. I particularly loved last week's leap five years into the future, in which Hiro and Ando (James Kyson Lee) discover that New York City has been decimated by a nuclear bomb, then meet up with the future version of Hiro.

Ando: Go talk to yourself.

Then Ando tells Future Hiro that after Future Hiro went back in time and told Petrelli to "save the cheerleader," Petrelli did save Claire, thereby keeping Sylar (Zachary Quinto) from gaining her power of invincibility. Future Hiro gets a deep look of satisfaction that his warning actually worked, and then he springs back into action, since the city can be saved after all.

There were so many great twists in the episode and so much action -- a great reminder, at a time when high-profile serial dramas like "Lost" and "24" are sagging, that these shows really do work when they're firing on all pistons.

But we'll revisit this one in more detail with a thorough finale recap on May 21. Until then, my fair chickens, let's pray for lots of happy endings this finale season, plus lots of sequined bear suits, giant tubs of tapioca pudding and flaming pyramids of angry rats.

This week: On Monday, relive the glorious final chapter of "The Amazing Race: All-Stars," then discuss the last five episodes of "The Sopranos" with us here. And don't miss our extensive finale coverage for the rest of the month!

Abc I Like To Watch Nbc Saturday Night Live Television