A hit job on Keith Olbermann

A nasty AP story equates the MSNBC host with Fox's Bill O'Reilly, and airs GOP complaints that he was allowed to anchor last week's debate coverage. 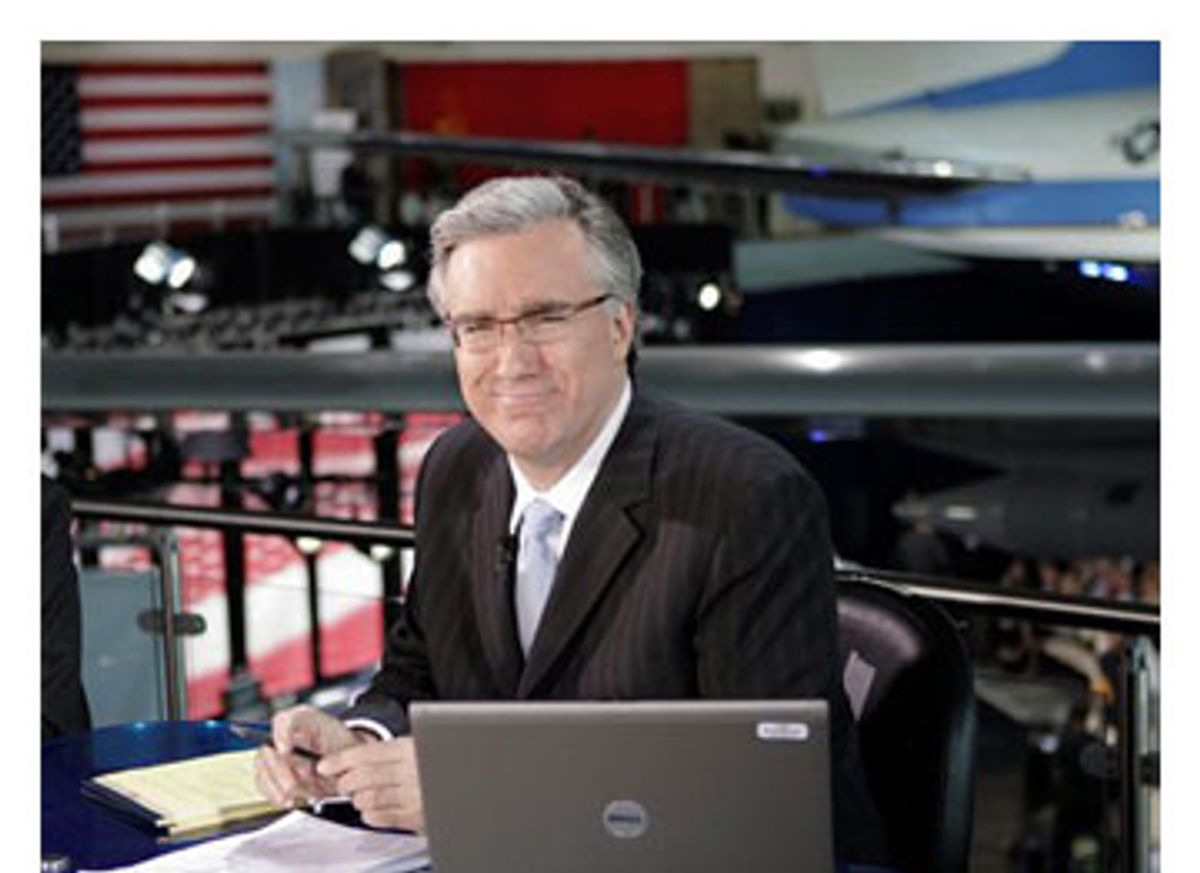 The Associated Press ran an outrageous story over the weekend, reporting that the Rudy Giuliani campaign complained to MSNBC about Keith Olbermann's anchoring the network's Republican debate coverage May 3. That wasn't the worst outrage, to me. I wasn't surprised that the thin-skinned Giuliani complained about Olbermann's debate-anchor role preemptively (after an Olbermann commentary blasted the former New York mayor for saying Democrats wouldn't fight terror if they won the White House). All candidates can be expected to play the refs to try to improve their media coverage, and the article revealed that other unnamed GOP candidates, not just the whiny Giuliani, also complained about Olbermann.

What bothered me most was the entire premise of the AP article, which depicted Olbermann as a polarizing partisan television hack equivalent to Fox's Bill O'Reilly. Near the end of the piece came a mind-blowing summary by writer David Bauder:

"Having Olbermann anchor -- as he will continue, with [Chris] Matthews, for big political nights throughout the campaign -- is the MSNBC equivalent of Fox News Channel assigning the same duties to O'Reilly. Fox has never done that, perhaps mindful of the immediate controversy that would result."

I looked at several versions of the story that ran on other sites, to see if that was a quote from an Olbermann critic or a Fox flack for which the attribution somehow got dropped. But no, it came from Bauder himself, an ironic outburst in an article decrying the way Olbermann has blended commentary with news reporting. In fact, the only source quoted in the piece criticizing MSNBC and Olbermann is Brent Bozell's ultra-right-wing Media Research Center. This story belonged on MRC's NewsBusters site, not in the AP. (Oh, and predictably, they loved it over there.) Setting up Olbermann as O'Reilly's counterpart is deeply unfair and dishonest.

The ways that Olbermann differs from O'Reilly are too many to count here. First and foremost, he doesn't run jihads against his enemies (well, except maybe Bill O'Reilly); he doesn't invite people he disagrees with onto his show only to shout at and humiliate them; he rarely rants, and when he does, he labels it "commentary." His "Countdown" is an opinionated take on the day's top five stories that owes more to "The Daily Show" and "Best Week Ever" than the Nation. He is indeed a Bush critic, but I haven't found him to be a Democratic partisan. (I edited Olbermann briefly when he wrote for Salon, and knew him to be passionate and hardworking but not ideologically driven; his time here is best remembered for his remarkable "ESPN: Mea Culpa," apologizing for the perfectionism and insecurity that led to clashes with co-workers and ultimately to his departure from the station.) Certainly as an anchor, he's far less partisan than Fox's dark Brit Hume, known for regular slurs against Democrats. To compare Olbermann to Hume would be unfair; to compare him to O'Reilly is disgraceful.

But the AP story was particularly galling in the wake of last Thursday's Republican debate, in which actual ethically questionable journalistic decisions were made -- and they favored Republicans, not Democrats. On May 4 Glenn Greenwald noted that the CEO of debate cosponsor Politico, former Reagan staffer Frederick Ryan, is also the chairman of the Ronald Reagan Presidential Library Foundation. (If you ever wondered how an upstart political trade paper with a tiny audience could make the big time so quickly, well, now you know!) Even without knowing about Ryan's dual loyalties, I thought the debate setting made it an infomercial for Reagan Republicanism. And if the 90 minutes of Reagan hagiography wasn't bad enough, the softball questions thrown by "Hardball" host Chris Matthews and Politico editor John Harris had many Democrats aghast, especially compared with the much tougher grilling their party candidates faced from NBC's Brian Williams the week before. To my knowledge, not one mainstream media outlet has reported what Greenwald did about the ties between the Politico, the Reagan library and Republican elites. Instead we get an AP hit job on Keith Olbermann.

As long as we're worried about whining Republicans complaining about Olbermann, why no story asking whether it's fair to Democrats that the MSNBC political team that covered their debate a week earlier included not just Olbermann but former Republican Rep. Joe Scarborough and outspoken conservative Tucker Carlson? Plus of course Matthews, who is sometimes counted as a Democrat, since he worked for Tip O'Neill and Jimmy Carter many years ago, even though anyone who's honest and watches the show knows he has found very few Democrats to like since those days -- and that he particularly has it in for both Clintons. Matthews' question about whether the 10 Republicans wanted to see Bill Clinton return to the White House was the lowest point in a poor performance Thursday night. I happen to think, on balance, that the MSNBC team was fair to the Democrats, but why wouldn't a story making an issue out of Olbermann's anchor duties mention the rest of the right-leaning MSNBC team? Why not ask whether Ryan's dual role as Politico CEO and Reagan library chairman compromised the debate's supposed nonpartisan status?

I'm going to clip and save Bauder's story for the next time I feel as if liberal bloggers are going overboard calling out the mainstream media on their anti-liberal, anti-Democratic biases. There may be no such thing as overboard in this climate.