"You have more bread crumbs than I do"

The attorney general says Congress knows more than he does about how he came to fire federal prosecutors. 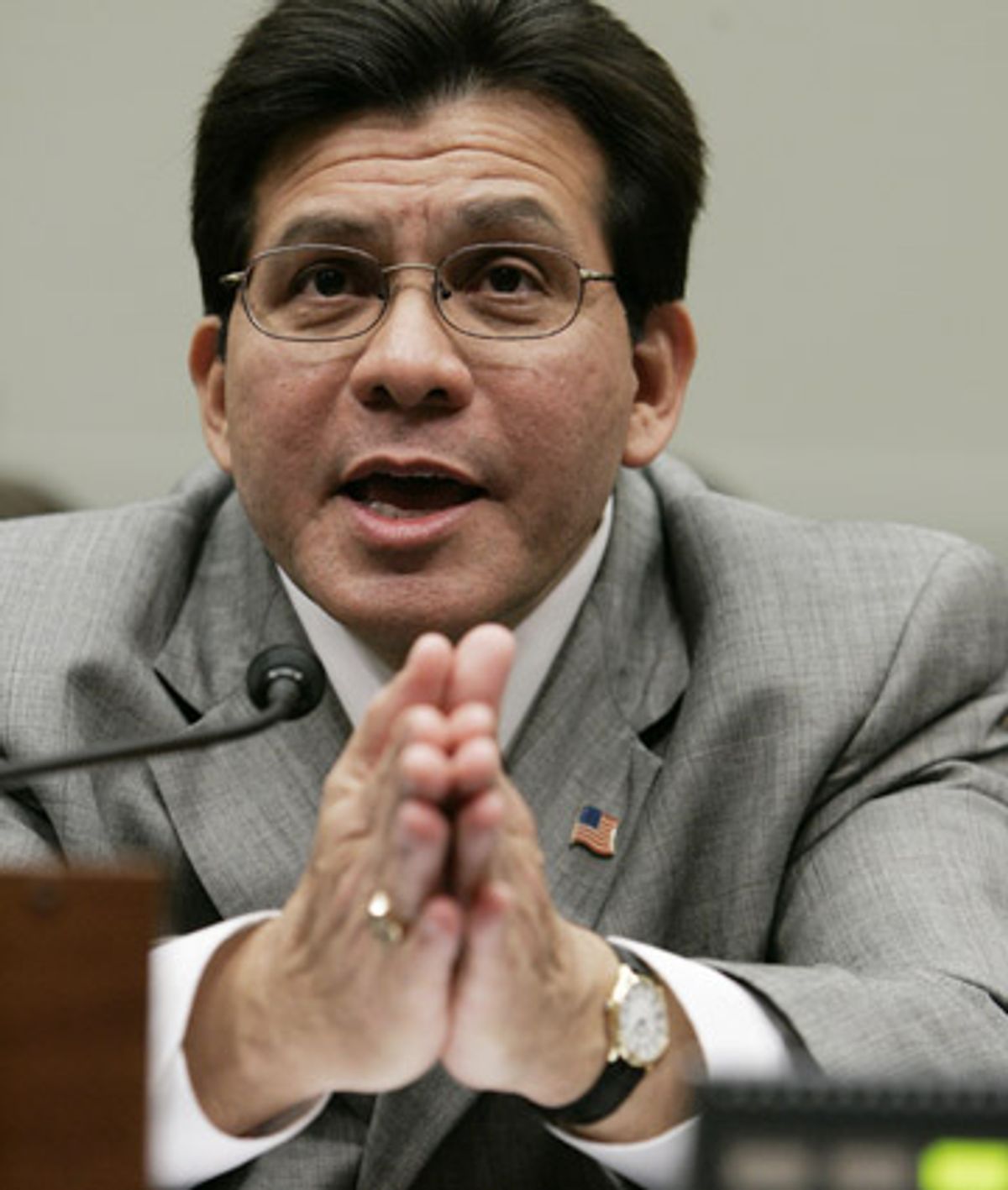 How did David Iglesias wind up on the list of U.S. attorneys to be fired?

We know that shortly before Iglesias was forced to resign, George W. Bush told Alberto Gonzales that he was hearing complaints about the lack of prosecution of so-called vote fraud cases in several states, including New Mexico, where Iglesias was the U.S. attorney. We know that Iglesias thinks that Karl Rove had a hand in getting him "out of the picture," and that there's evidence suggesting as much.

But who actually put Iglesias' name on the to-be-fired list? It seems like a simple question, but here's what happened this afternoon when members of the House Judiciary Committee tried to get an answer from Gonzales.

Rep. John Conyers: Do you have information on whether Karl Rove or any other White House staff member helped get Mr. Iglesias on the termination list, either through Ms. [Monica] Goodling, who was liaison to the White House, or anyone else ...?

Gonzales: That is my recollection -- not just New Mexico, but also, as I recall, Philadelphia as well ...

Conyers: A couple other places. All right. And Mr. Iglesias appears on the termination list in October or November ... Well, now, if we start following these bread crumbs, it suggests that there could have been some connection between the discussions between yourself and Mr. Rove and Mr. Iglesias hitting the door, as an ex-employee.

Gonzales: Mr. Chairman, you have more bread crumbs than I do, quite frankly, because you've had the opportunity to speak directly to other fact witnesses at the Department of Justice. I was not surprised to see Mr. Iglesias recommended to me, based upon previous conversations that I'd had with Senator [Pete] Domenici.

Conyers: Well, you may have yet more bread crumbs than I, sir, because you were the one that talked to Karl Rove. That's a pretty big bread crumb.

Gonzales: I have a lot of conversations with Mr. Rove, Mr. Chairman. I have no recollection that Mr. Rove ever recommended that Mr. Iglesias be terminated. Again, what he was conveying to me were concerns that had been raised with him with respect to voter fraud prosecutions in these three jurisdictions.

Conyers: Well, keep searching your memory on this, because this has taken on quite a bit of significance and importance, as you can understand.

Gonzales: I will continue searching my memory, Mr. Chairman ...

A short while later, Rep. Loretta Sanchez noted that Deputy Attorney General Paul McNulty has said that he had only "limited input" in determining which U.S. attorneys should be forced out. If McNulty's input was "limited," Sanchez asked Gonzales, "who, to your knowledge, had more than merely limited input in the final decision process? I mean, was that on your shoulders? Was that you?" Gonzales' response: "Congresswoman, you probably have more information about that than I."

When it came time for Rep. Robert Wexler to ask questions of the attorney general, he turned the focus back to the question of who put Iglesias on the list. But that doesn't mean he got any answers, either.

Wexler: If I understand it correctly, you testified that Karl Rove talked to you about voter fraud in New Mexico in fall 2006.

Wexler: Mr. Iglesias is selected for the termination list in early November 2006?

Gonzales: I think on Election Day -- well, I don't remember when he was selected. I wasn't involved in that process ...

Wexler: And it's your testimony [that] you did not select Mr. Iglesias to be put on the list, correct?

Gonzales: His name was brought forward to me, recommended along with others.

Wexler: Right. You did not select him? Did Mr. [Kyle] Sampson select him?

Gonzales: Mr. Sampson was charged with coordinating this effort.

Wexler: He didn't select him?

Gonzales: I have not spoken with Mr. Sampson about this.

Wexler: Right. Did former Deputy Attorney General [James] Comey -- did he select them?

Wexler: So he didn't select them.

Gonzales: I don't think he selected them.

Gonzales: I haven't spoken -- I haven't asked that question to Mr. McNulty.

Wexler: Mr. McNulty told us he didn't select them. Did Mr. [David] Margolis select them?

Wexler: He didn't select them. We've talked a lot about the president's authority to have who he wants where. Did the president select Mr. Iglesias to be put on the termination list?

Wexler: No, the president didn't select him. Did the vice president select him to put him, Mr. Iglesias, on the termination list?

Gonzales: Well, what's important, Congressman, is that there was a consensus recommendation made to me. How he got on the list was less ...

Wexler: So a group of people put him on the list?

Gonzales: What's less important is that I accepted a recommendation and I made the decision. I accept responsibility for the decision.

Gonzales: Congressman, if I knew the answer to that question I would provide you the answer. I have not spoken with the individuals involved ...

Wexler: So you don't know who put [Iglesias on the list]. Why was Mr. Iglesias put on the list by this mystery person?

Gonzales: Well, again, I wasn't surprised to see Mr. Iglesias' name recommended to me based upon conversations that I had had with the senior senator from New Mexico. He had lost confidence in Mr. Iglesias. Let me just say, Mr. Iglesias' story is a great one, it's the American dream, and there are many good things about his performance, and I very much admire him as a person.

Wexler: But you won't tell the American people who put him on a list to terminate his employment.

Gonzales: I accept responsibility for ...

Wexler: You accept responsibility for making the decision ultimately to accept the termination list, but you will not come forth and tell the American people who put Mr. Iglesias on the list to be fired.

Gonzales: Out of respect for the integrity of this investigation and the investigations occurring at the Department of Justice, I have not made that inquiry with respect to other fact witnesses.

Wexler: But you were OK with firing them, but you won't tell us who made the recommendation to fire them.

Gonzales: I think I was justified in relying upon the senior leadership in the department ... Let me just say this: I did not make the decision with respect to Mr. Iglesias ...

Wexler: I know. You haven't made any decision ... You have been very clear about that.

Gonzales: I accept full responsibility for this.

Wexler: But you won't tell us who put Mr. Iglesias on that list?

Gonzales: You would have a better opportunity to access ...

Gonzales: The committee would, the Congress.

Wexler: Are you the attorney general? Do you run the Department of Justice?

Gonzales: I do. And it has been frustrating to me to not be able to ask these kinds of questions. But I want to respect the integrity of this investigation, and the investigations going on within the department. If we all came up here ... and had the same testimony about events that occurred over two years, you would look at that with great suspicion. You would wonder ... "Have you guys talked to each other about facts?"