Christopher Hitchens has attacked modern-day saints like Mother Teresa and Princess Di, but his new book takes aim at the most sacred cow of all: The Almighty. 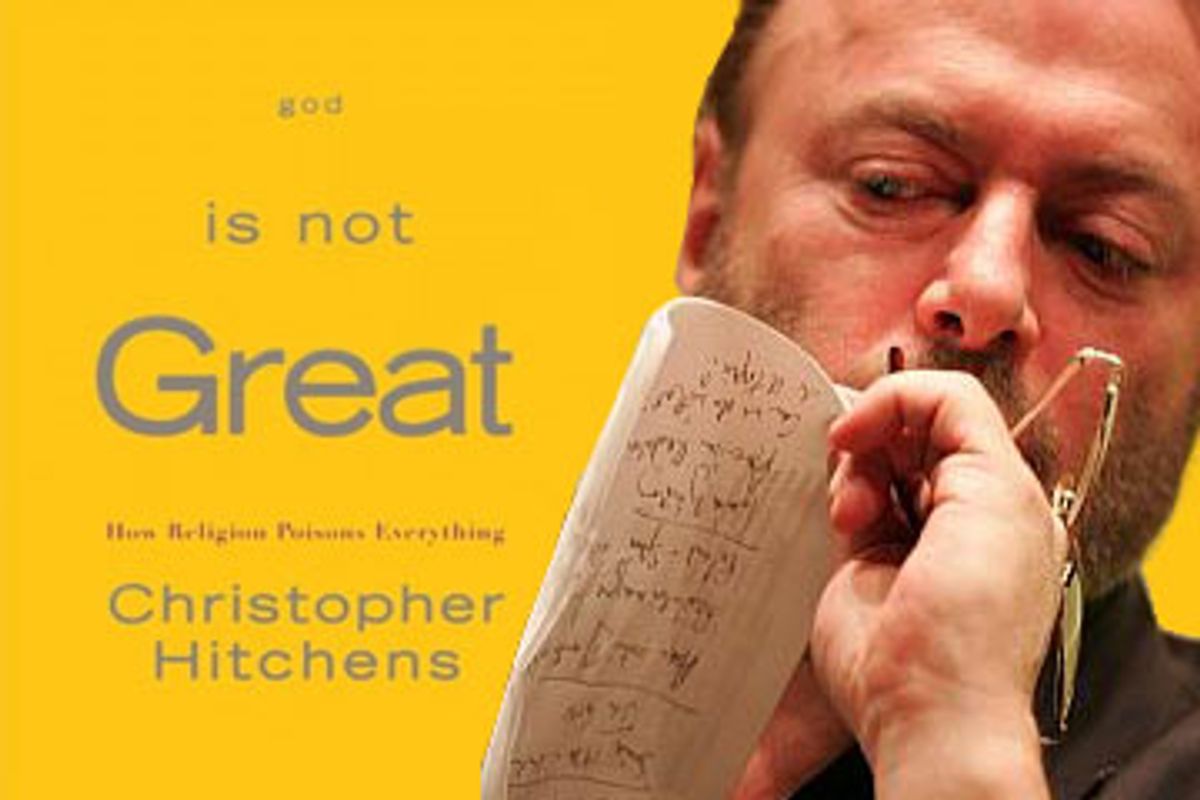 For a while back there it seemed as though we had God on the ropes. Copernicanism. The Enlightenment. The theory of evolution. These, surely, must have stung. As early as 1887, impatient to call the victory for secularism, Nietzsche proclaimed: "Belief in God has been overturned, belief in the Christian-ascetic ideal is even now fighting its last fight." It was Nietzsche who performed the definitive intellectual castration, generously conceding: "It is true, there could be a metaphysical world; the absolute possibility of it is hardly to be disputed ... but one can do absolutely nothing with it, not to speak of letting happiness, salvation and life depend on the gossamer of such a possibility."

How is it, then, that at the dawn of the third millennium, this maligned and disenfranchised neuter soldiers on, ordering his followers to murder abortionists, block stem-cell research, and fly planes into buildings? As atheists the nation over will inform you, 91 percent of American adults believe in God. (A vertiginously high 79 percent believe in angels.) Like Michael Myers in "Halloween," the tenacious old codger simply refuses to die, thereby condemning us to an infinity of blandly gruesome sequels.

In response to this interminable saga, Christopher Hitchens has done what he does best: He has written a book. Some commentators will automatically bemoan the appearance of yet another populist critique of organized religion, as though the recent profusion of such works -- "The God Delusion" by Richard Dawkins, Sam Harris' "Letter to a Christian Nation," "Atheist Universe" by David Mills, to name just a few of this legion -- was something other than a sincere response to the faith-based atrocities currently raging in the Middle East and to the ever growing, unconstitutional proximity, in our own country, of church and state.

According to the Hitch -- as he is known to his many, many famous friends, who are always turning up, like colorful minor characters, in the endlessly serialized picaresque novel of his life -- "God Is Not Great" not only because He does not exist but also because belief in Him is dangerous and destructive. Oscar Wilde charitably noted that "An idea should not be held responsible for those who believe in it." Hitchens, however, is less forgiving and, along with many other famous polemical atheists before him, believes that the safest way to ensure that no more wars get started in His name is to do away with the oldest and most persistent casus belli of them all.

Like a greedy man at the buffet overfilling his plate, Hitchens spends "God Is Not Great" heaping iniquity after iniquity on the three central monotheistic faiths for the role they have played in history. At times this can lead to indiscriminate censure. Is religion simply used to justify the unpleasant things that humans would be doing anyway? Or is it the cause of these unpleasant things that we would not have been tempted to do otherwise? The book seems to want to have it both ways. For example, Hitchens understands perfectly well that the Ten Commandments, whose preamble contains "a stern reminder of omnipotence and limitless revenge, of the sort with which a Babylonian or Assyrian emperor might have ordered the scribes to begin a proclamation," are man-made and man-serving. A few pages later, however, he writes that "Israeli rabbis solemnly debate to this very day whether the demand to exterminate the Amalekites is a coded message to do away with the Palestinians" -- and it is religious purism, not a pragmatic power struggle, at the reins.

Of course, it is not so difficult to see the two ideas (religion as excuse, religion as motive) as historical bedfellows. Hitchens might have done well to spell out this poisonous dialectic early on: the way that religion, whatever else it does, codifies and perpetuates as divine writ that which is merely historical (slavery, sexism, fear of pigs). This sorry process leaves followers clinging to what would most likely be recognized as harmful and retrograde were it not enshrined in scripture.

Although the book is largely accurate in its indictment of religion's poor historical record and generously equips the reader with an abundance of fun facts that can then be used to stone the pious -- the Vatican did not formally withdraw the charge of "deicide" against the Jewish people until the 1960s; the doctrine of the Immaculate Conception was "announced or discovered" by Rome in 1852 -- it adds almost nothing new to the case against God. This is the undoing of most recent atheistic tracts, which frequently descend to a tone of scandalized and helpless incredulity ("so pathetic as to defy description," etc.) at what they take to be the obdurate and titanic backwardness of the faithful: No matter how many people are killed and oppressed and persecuted in His name, people will not let go of God.

Clearly, the facts are not enough. What is required, if we are to be brought around to Hitchens' view of things, is a direct engagement with the nature of personal faith. It is precisely here, however, that his campaign falters. In an especially unsatisfying chapter, "The Metaphysical Claims of Religion Are False," Hitchens recalls reading about "some ecumenical conference of Christians who desire to show their broad-mindedness and invite some physicists along," and then goes on to scoff, "But I am compelled to remember what I know -- which is that there would be no such churches in the first place if humanity had not been afraid of the weather, the dark, the plague, the eclipse, and all manner of other things now easily explicable." The champion of disinterested secular inquiry impatiently reduces the origin of religious feeling to a primitive dread at nature's apparently brutal indifference to our small lives.

Hitchens, who at the start of the book writes that "Literature, not scripture, sustains the mind and -- since there is no other metaphor -- the soul," would surely reject any crude psychoanalytic quackery that somehow explained "Hamlet" or "Anna Karenina" as merely neurotic defenses against astringent reality. But he is guilty of exactly the same analytical crudity in his attenuation of religion.

Although I am an unbeliever, this doesn't prevent me from recognizing that what led humans to create gods was not simply fear but a desire to harness and account for those sustaining moments when we receive our lives most abundantly. Iris Murdoch gives a far more persuasive and imaginatively generous account of religion when she writes, "God does not and cannot exist. But what led us to conceive of him does exist and is constantly pictured. That is, it is real as an Idea, and also incarnate in knowledge and work and love."

Furthermore, Hitchens seems to think that, for any sensible modern person, reason must inevitably usurp the place religion once held at the center of life. Such a position assumes that simply because we understand what is going on during an earthquake or when a person is dying of cancer, these events cease to be terrifying. The quality of terror is different, certainly, for we no longer see the destruction of a city or the death of a friend as the work of supernatural disgruntlement -- or if we do, we understand, at least, the precedence of scientific explanation. But fear and helplessness in the face of nature, the torture and indignity of continuing to feel love for an object that has disappeared from the world -- "That nothing cures," to quote Philip Larkin. Man cannot live on reason alone, and for those who are unable to find in literature the sustenance for mind and soul of which Hitchens speaks, religion will continue to give existence purpose and meaning.

It's this radical inability to comprehend or even take an interest in the nature of religious experience with anything resembling imaginative sympathy -- a rather patronizing analogy with his own loss of faith in Marxism notwithstanding -- that makes "God Is Not Great" such a disappointing book. Watching a man of his intellect and learning go to work on the indefensible crassness of religious fundamentalism is rather like watching a vainglorious father running rings around his young son in a game of soccer. Hitchens might have engaged with the nuanced, less easily ridiculed faith of William Blake or Simone Weil, thinkers in whom he would have found worthy opponents. But instead he confines himself to picking apart fundamentalism, and we are the less enlightened for it.

Giles Harvey is a freelance book critic living in New York. His essays and reviews have appeared in The Believer, The Village Voice, and The New Leader.