Republican manipulation of the polls long predates the U.S. attorneys plot -- and the U.S. voting system needs an overhaul. 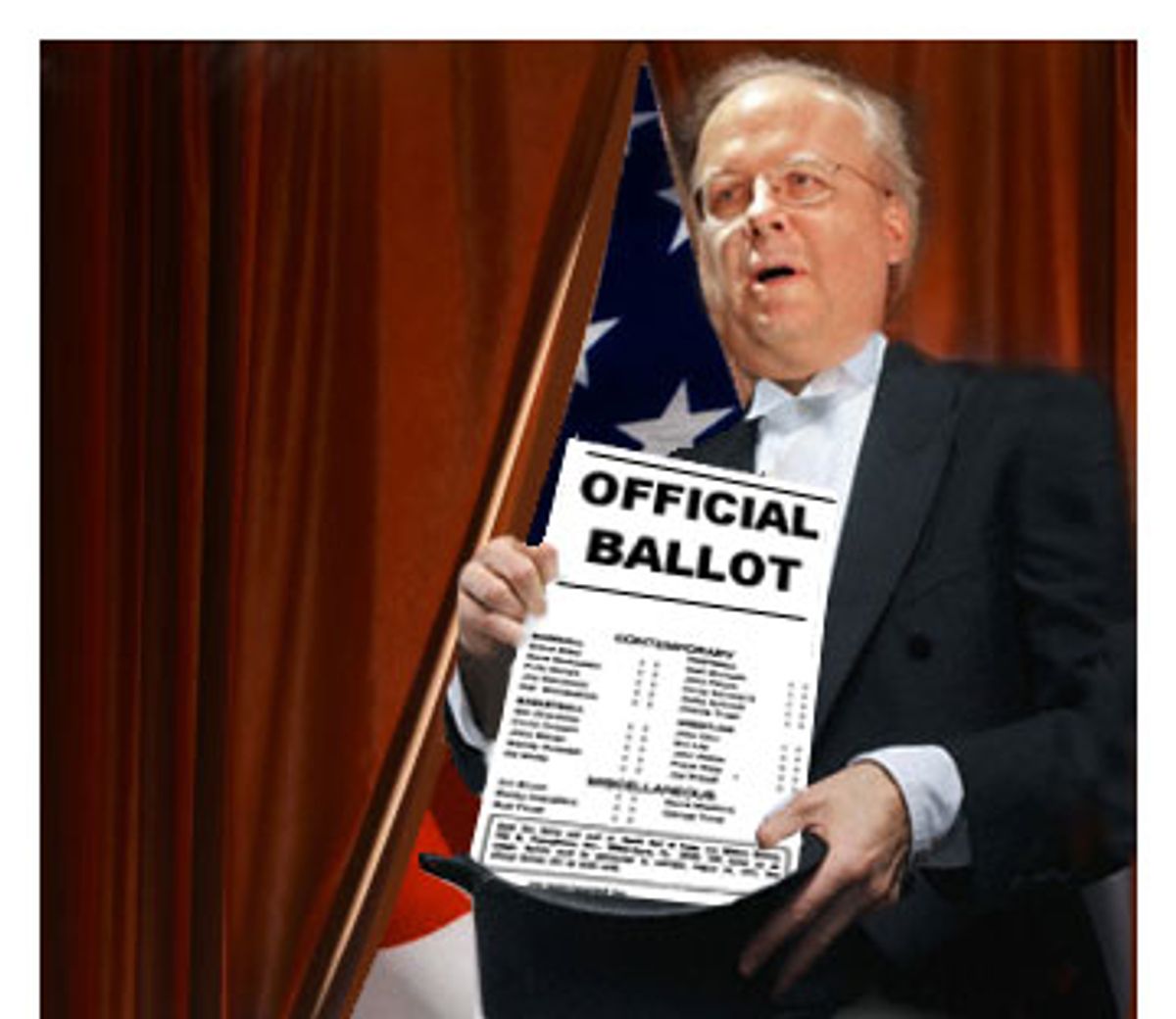 By evil chance, I spent the Saturday night before Election Day 2000 at a jolly dinner for high-level Republicans. Most of the talk over the entrees concerned why then-candidate George W. Bush had been too pusillanimous to tell the voters that Al Gore was not just a liberal, but a Soviet-style Marxist-Leninist. But as the desserts circulated, so too did a piece of comic relief -- an anonymous leaflet explaining to voters that because of heavy voter registration, the rules had been changed: Republicans would vote on Tuesday, Democrats and independents on Wednesday.

I think of that dinner whenever I read about the widening scandal of the U.S. attorneys and the politicization of the Justice Department under Attorney General Alberto Gonzales. Gonzo is probably the most endangered man since William Tell's son Walter. The pattern behind the scandal, however, transcends Gonzales' fate or that of his underlings.

At least part of the U.S. attorneys plot seems to derive from the "election fraud" hoax that Republicans are trying to perpetrate in order to gain control of the country's voter lists. So nailing this inept crew of thugs won't be good enough. We need laws protecting the right to vote from the kind of phony, partisan prosecutors that Gonzales, Rove and Co. were trying to put in place, and from the punitive, restrictive voter-ID laws that are a prominent part of the far-right political agenda.

Republicans do cherish their little practical jokes -- the leaflets in African-American neighborhoods warning that voters must pay outstanding traffic tickets before voting; the calls in Virginia in 2006 from the mythical "Virginia Election Commission" warning voters they would be arrested if they showed up at the polls. The best way to steal an election is the old-fashioned way: control who shows up. It's widely known that Republicans do better when the turnout is lighter, whiter, older and richer; minorities, young people and the poor are easy game for hoaxes and intimidation.

The latest and most elaborate of these jokes is the urban legend that American elections are rife with voter fraud, particularly in the kinds of poor and minority neighborhoods inhabited by Democrats. In 2002, Attorney General John Ashcroft announced that fraudulent voting would be a major target of the Department of Justice. As the New York Times reported last month, the main result of this massive effort was such coups as the deportation of a legal immigrant who mistakenly filled out a voter-registration card while waiting in line at the department of motor vehicles.

But the administration has remained ferociously committed to suppressing voter fraud -- as soon as it can find some. In April of last year, Karl Rove warned a Republican lawyers' group that "we have, as you know, an enormous and growing problem with elections in certain parts of America today. We are, in some parts of the country, I'm afraid to say, beginning to look like we have elections like those run in countries where the guys in charge are, you know, colonels in mirrored sunglasses. I mean, it's a real problem.

"I appreciate that all that you're doing in those hot spots around the country to ensure that the ballot -- the integrity of the ballot is protected, because it's important to our democracy."

One of the aims of the abortive purge of U.S. attorneys was to punish those who refused to toe the line on the new emphasis on alleged voter fraud. A few fired prosecutors would serve as examples to the rest b

But the assault on voter fraud was a solution looking for a problem. As part of the Help America Vote Act, Republicans insisted on creating the Election Assistance Commission, which commissioned studies of the asserted problem. When the studies failed to turn up evidence of fraud nationwide, appointed Republican officials on the EAC insisted that the language say only that "there is a great deal of debate on the pervasiveness of fraud in elections" -- the same approach to inconvenient evidence that's made the Bush global-warming policy the envy of the world.

The legend of massive voter fraud forms the backdrop to enactment of harsh voter-ID laws. As previously recounted in Salon, a state voter-ID law in Missouri nearly prevented the Democrats from retaking the U.S. Senate -- a prime example of how the voter fraud narrative was used to sell a law intended to keep Democrats from the polls.

In November 2000, Missouri Republican John Ashcroft lost his Senate seat in a close election in which the votes of African-Americans from St. Louis were crucial. Ashcroft's next job was U.S. attorney general. The Department of Justice and Missouri's two U.S. attorneys soon undertook multiple voter fraud investigations. They probed the 2000 election, the 2001 mayoral primary in St. Louis, and the 2004 election, convicting a total of four people. The resulting specter of fraud was used to float a voter-ID law in the Republican-dominated state Legislature, which was finally passed in May 2006.

By then, President Bush had already used a Patriot Act loophole to dispatch Bradley Schlozman, who had supervised the voting section of the DOJ's Civil Rights Division, to Kansas City as the Western District of Missouri's new U.S. attorney. Less than a week before Election Day 2006, Schlozman indicted four people for voter fraud. Schlozman's endeavors were first spotlighted by Salon in a report on March 21, helping to make him the target of increasing blogger and media scrutiny. As one former senior Justice official told Salon then, Schlozman's appointment had senior Justice Department officials "scratching their heads" because Schlozman "was not a very well-regarded trial attorney."

In the end, the voter-fraud scare didn't help Missouri Republicans. Schlozman may have been filing indictments, but the state Supreme Court had struck down Missouri's new voter-ID law a month before the election, finding that it contravened the state constitution. On Nov. 7, Democrat Claire McCaskill defeated incumbent Republican Jim Talent by fewer than 50,000 votes out of more than 2 million cast. The voter-ID law would've required about 170,000 registered voters to apply for a new ID just to be allowed to vote again.

We can't count on the U.S. Constitution to protect the election process. The Constitution does not explicitly protect the right to vote, and the conservative majority on the Rehnquist and Roberts courts has proved friendly to anti-turnout measures. As Mark Graber of the University of Maryland pointed out recently, the court echoed right-wing rhetoric about voter fraud in a little-noticed 2006 opinion allowing Arizona to implement its restrictive voter-ID law. "Voters who fear their legitimate votes will be outweighed by fraudulent ones will feel disenfranchised," the court's per curiam opinion stated. This is the argument that voter-restrictionists have fallen back on. There may be no voter fraud, but if people think there is, then we should tighten up anyway. That's the argument used in Missouri (with support from the White House), where studies showed elections were mostly clean. As Graber noted, to restrictionists, "such a 'feeling' offsets the interests of voters who are disenfranchised by voter-ID laws by actually driving honest citizens out of the democratic process!"

So we can't count on federal courts; and not every state constitution contains a guarantee as specific as Missouri's provision guaranteeing the vote to "all citizens of the United States." In 2007, the right to vote is a little like the swimmers in the film "Open Water" -- still afloat, but encircled by hungry sharks who sooner or later will move in for the kill.

The answer is in the hands of the new Democratic majority in Congress. Though most Americans believe that the states are in sole charge of voting and elections, the framers at Philadelphia recognized that state officials might abuse their authority over voting. That's why Article I, Section 4 of the Constitution gives states the initial power to supervise federal elections -- but adds that "Congress may at any time by Law make or alter such Regulations." This provision was hotly debated during ratification; but federalists insisted that Congress needed this backstop power to protect the republican character of the new government against state meddling.

But such defensive measures amount to little more than swatting sharks' noses. We're going to need a bigger boat. In the 1970 case of Oregon v. Mitchell, a fractured court approved a statute lowering the voting age to 18 in federal elections, even if states insisted on keeping it at 21 for state voting. (The 26th Amendment subsequently lowered the age to 18 for all elections.) How about a bill making clear that every American who is not under active sentence for felony has a right to vote for those who will govern the country? The bill could go on to say that states could require reasonable identification for new registrants, but outlaw onerous provisions like Missouri's, which would, for example, have required that married women produce legal documentation of their name change. (I reviewed the Missouri law with my mother, who has voted in every election since 1944. We determined that, had she lived in Missouri, she would have been barred from the polls in 2006.)

For that matter, why not just move the entire country to the vote-by-mail system we use in my home state of Oregon? It's quick, it's convenient, it leaves a paper trail, and we have had no credible accusations of voter fraud since it was adopted during the 1990s -- and a stunning 86 percent of registered voters cast ballots in the 2004 presidential election.

Voter fraud is a phony issue, and if restrictionists shape the dialogue, sooner or later our right to vote will become property of the Karl Roves, who will use the machinery of the criminal law to recreate the electorate in their own image.

The real issue is the right of every American citizen to vote, the right of the people to choose their rulers, rather than the reverse. Who can really oppose that, if asked about it in the light of day?