Does this uptight drama -- starring Lindsay Lohan as an oversexed teen and Jane Fonda as her crabby granny -- shed light on Lohan's off-screen antics? 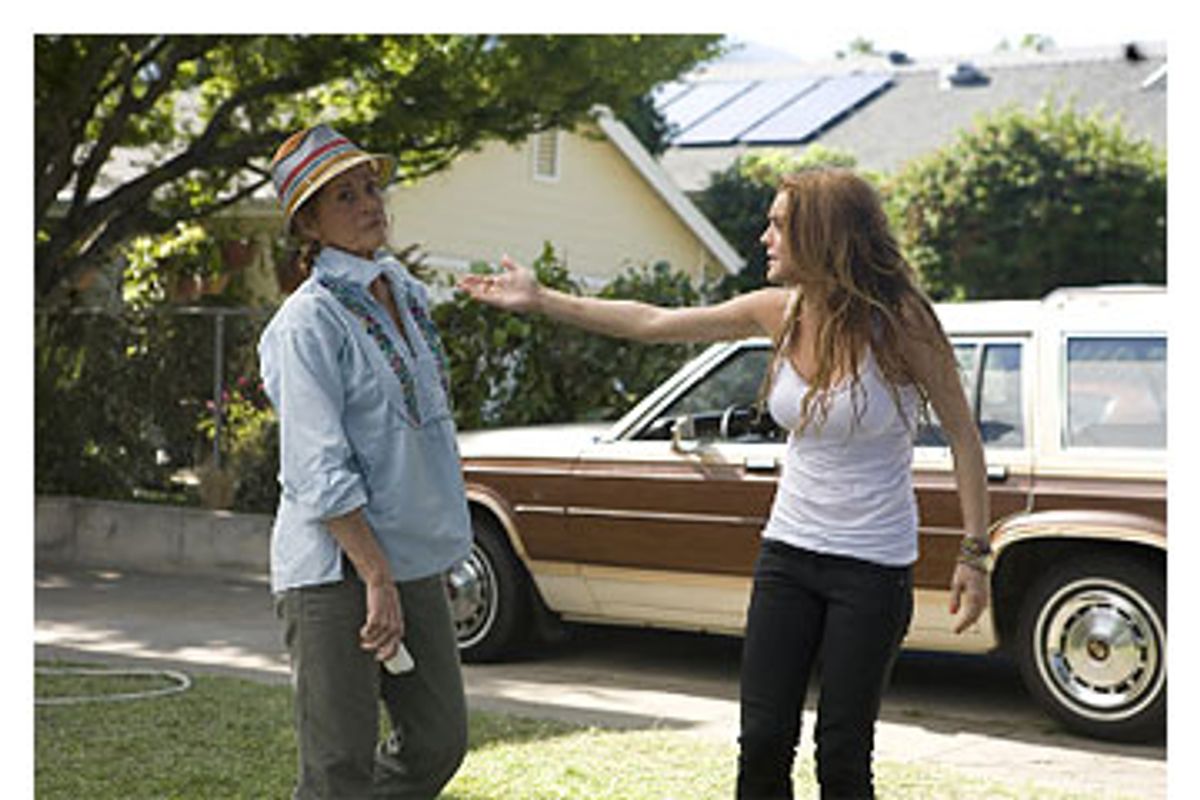 If only contemporary movie characters could simply be allowed to misbehave, to be bratty and selfish and disrespectful for no good reason. But there always has to be a reason: In Garry Marshall's "Georgia Rule," Lindsay Lohan plays Rachel, a bratty, selfish, disrespectful California teen whose uptight, Hermès- and Louboutin-wearing mom, Lilly (Felicity Huffman), ships her off to Idaho for a month's worth of tough love at the hands of disciplinarian granny Georgia (Jane Fonda).

Let's forget, for a moment, that the words "Jane Fonda" and "disciplinarian granny" would ever have cause to appear in the same sentence, and focus instead on the fact that poor Rachel isn't just a misunderstood bad gal: She's bad because she's been sexually abused by her slick, fatcat-lawyer stepfather, Arnold (Cary Elwes, saddled with a bummer of a role). Or has she? You see, Rachel is such a brat that almost no one, save wise old grandma Georgia, knows when she's telling the truth. The characters in "Georgia Rule" waffle between giving the victim the benefit of the doubt and wondering if she's not simply a bad-seed type who'll do anything for attention.

"Georgia Rule" -- its script is by Mark Andrus, whose credits include other faux heartwarmers like "Divine Secrets of the Ya-Ya Sisterhood" and "As Good As It Gets" -- is clearly intended to be an uplifting multigenerational drama about abuse, healing and forgiveness. Yet there's something unsavory about the way it uses a character's emotional and psychological scars as a gimmick, a way for us both to enjoy the vision of Lohan in a series of skimpy baby-doll mini-dresses even as we're ultimately supposed to murmur, "Poor little thing, no wonder she's so sexually precocious!" The whole exercise has the air of a preacher who spins a juicy sermon about a buxom floozy in frilly panties and silk stockings, just so he can hit his congregation with the revelation that she ultimately sees the light and gets saved.

In "Georgia Rule," Lohan's Rachel sure is hot, but she's sad-hot, not happy-hot: Sex has bummed her out and screwed her up, which is part of the reason she seduces a hunky local God-fearing Mormon lad (played by Garrett Hedlund), freely giving him an (off-screen) blow job. And she develops a crush on the local vet, Simon (Dermot Mulroney), who's smart enough to know she's formed an attachment to him as a father figure.

It would be one thing if "Georgia Rule" were simply about damaged people finding their way through life. But beneath the movie's slippery, feel-better surface lies a prim, conservative core. Lohan, with her sun-kissed skin and lithe limbs, is a vision of polished, hyperrealistic teen beauty. But the picture dances dangerously close to suggesting that Rachel may have been "asking for it" by being so good-looking and so sassy -- and, by extension, it makes us feel guilty for looking. While I don't want to see Lohan, a very gifted young actress, screw up her life, after sitting through "Georgia Rule," I'm starting to wonder if her "unprofessional" behavior during the movie's filming -- which prompted a slap on the wrist from a Morgan Creek Productions studio head -- wasn't a subliminal, albeit inappropriate, response to this weird, semi-repressive material. "Georgia Rule" made me, a full-fledged, life-in-the-slow-lane grown-up, feel like acting out; maybe it had the same effect on Lohan.

None of the movie's three starring actresses respond well to its vice grip. Lohan comes through most gracefully: Her Rachel is a vixen without shame or embarrassment, with more self-respect and better survival instincts than the movie around her allows room for. Huffman, generally a terrific actress, gets to play two moods here, shrill and emotionally crumpled, and they're both so amped up that they feel completely false.

But it's Fonda who represents the movie's real lost opportunity. Now that she's back, which filmmaker is going to win the prize for figuring out how to put her gifts, and her looks, to use? Georgia is supposed to be a peppery character: She'll use the word "fuck," but she chastises those around her for using the Lord's name in vain. (This is a movie where the upright Christian grandma chases after blasphemers brandishing a bar of soap. Was this role written for Jane Fonda or Ellen Corby?) "Georgia Rule" believes, with the firmness of a good fanny-paddling, that a bit o' discipline is just what today's uppity youngsters need.

Fonda deserves more complexity, more richness, than this character offers her. She does have some scenes, with Huffman, that allow her to reveal a few hidden layers: Georgia and Lilly have been estranged for years, partly because Georgia is just too rigid, and Fonda plays her character's moments of reckoning with surprising subtlety. And there's no way around it: Fonda is one hot granny, not just because her finely chiseled features have aged beautifully, but because her carriage (not to mention her aura) is bracingly youthful.

I enjoyed watching Fonda in "Georgia Rule," but I can't help wanting more for her. Would she consider it a step down to do some smaller movies, with lesser-known directors -- as, say, Julie Christie has with the terrific Sarah Polley picture "Away from Her"? Marshall is an A-list director who generally turns out Grade-Z movies, pictures that feel as if they were made from compilations of audience surveys. At least Fonda occasionally got to be funny in the mostly dismal "Monster-in-Law." (I have fond memories of her pleading with Wanda Sykes' character, "Let's go someplace near the ocean and drink lunch!") In "Georgia Rule," she plays a weathered but strong survivor -- and that description alone should be enough to make any actress cringe. After all these years, Fonda deserves a little levity.