Republicans, many of whom seem too dense to comprehend the damage he's inflicting on the Justice Department, express sympathy for the attorney general's ordeal. 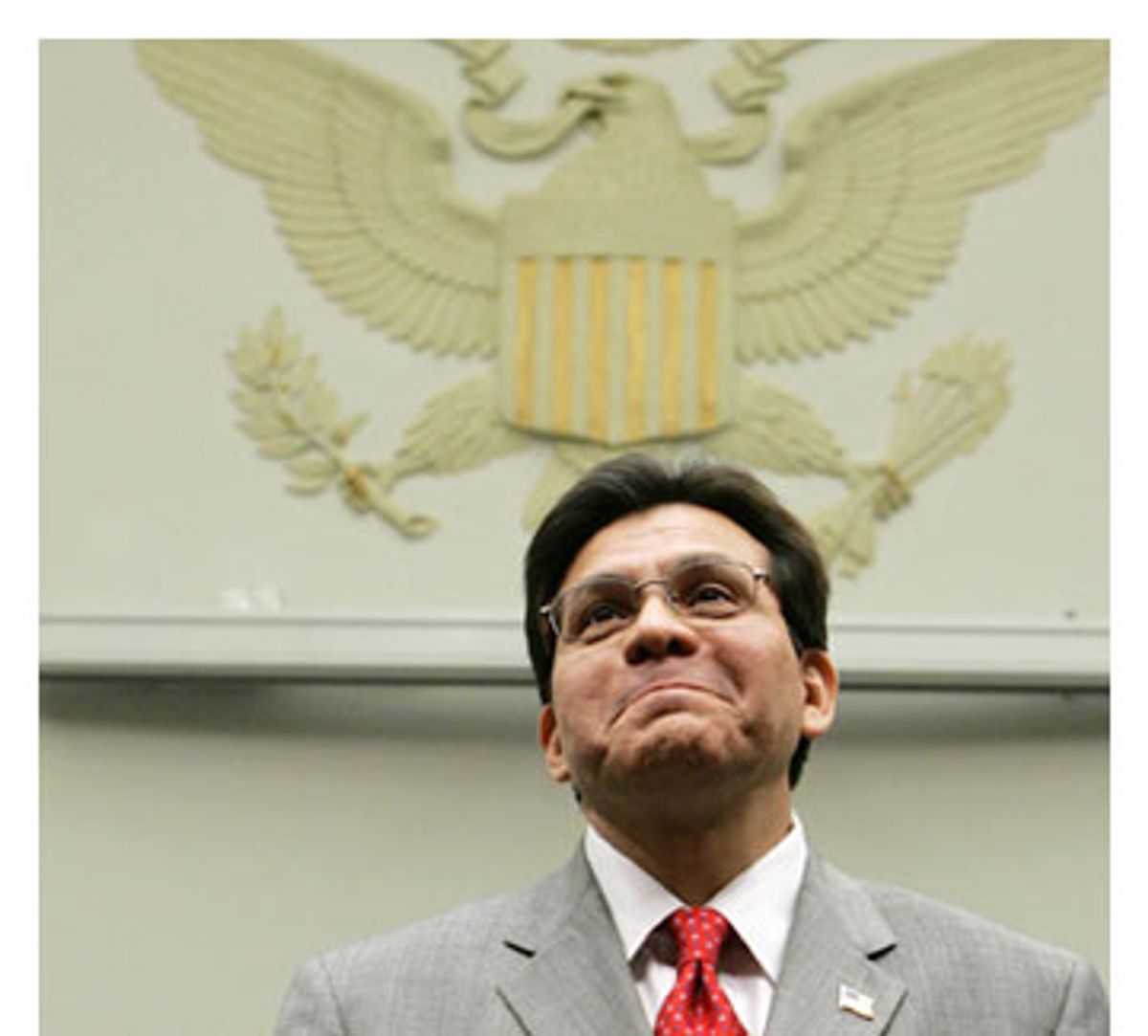 If the House Judiciary Committee session Thursday starring Alberto Gonzales produced few revelations about the suspicious dismissal of eight (or nine or more) U.S. attorneys, the hearing did clarify a critical political reality. No matter how discredited he is -- and no matter how much damage he continues to inflict on the Justice Department -- this attorney general will not resign.

What the six-hour hearing established most clearly is that most Republicans remain united behind Gonzales despite the clear evidence of his incompetence, dishonesty and contempt for Congress as an institution. Unlike their counterparts in the Senate, none of the Republicans on the House Judiciary Committee even posed a sharp question to him, let alone urged his resignation. Instead they acted in partisan lockstep, expressing sympathy for the poor attorney general's ordeal, pretending that there is no scandal and no stonewall, and insisting that the investigation should end.

The Senate Republicans who upbraided Gonzales last month, such as Arlen Specter, R-Pa., and Tom Coburn, R-Okla., certainly have their faults. Specter is slippery and loquacious; Coburn is extreme and slightly nutty. But they and their colleagues cut an Athenian profile compared with the hacks in the House, who cannot seem to comprehend why a politicized law enforcement system is a danger to them as well as their enemies.

Obviously Republicans have paid no attention to the eloquent warnings of their committee's chairman, John Conyers, explaining why this scandal jeopardizes the most important asset of the Justice Department, namely "its reputation for integrity and independence." Then again, listening to them for hours was a powerful reminder that many of them may simply be too stupid to comprehend what Conyers was talking about.

Consider the remarks of Ric Keller, R-Fla., who displayed his grasp of the issues at hand -- and the purpose of oversight hearings -- by asking the attorney general a truly penetrating question.

"Tell me what your top two priorities are going to be over the next 20 months that you'd like to accomplish," he inquired sunnily.

"I'll give you three," answered Gonzales, who went on to recall his meeting with the president on Sept. 11, 2001, which made him want to keep America safe. He also mentioned his aversion to violent crime and gangs, and then held up his arm to show a wristband that was given to him by a man whose daughter had been murdered by a sex offender. That wristband reminds him that he wants to keep America's children safe, too.

Keller followed up with equal rigor: "As a prominent Cabinet member, U.S. attorney, or U.S. attorney general, you could leave today and make $1 million a year at a law firm pretty easily, but you're staying on and want to stay on. Is it because of your passion for those three things, violent crime, terrorism and getting after child predators?"

Finally, Keller declared that he had solved the mystery of Carol Lam, the former U.S. attorney in San Diego who was dismissed in the middle of her probe of crooked Republican congressmen, CIA officials and defense contractors. It was "impossible" that the defense contracting investigation had motivated her firing, he said, because Rep. Darrell Issa, R-Calif., had complained about her prosecution of immigration cases long before that defense contracting case began.

In Keller's dim mind, the bogus immigration complaint could not have been dredged up as an excuse to fire Lam once her superiors had decided to get rid of her for other reasons. That scenario is just too complicated for him.

Much of the Republican questioning was similarly unedifying. Rep. Louie Gohmert, R-Texas, a former state judge, spent his time rehashing the false comparison to the Clinton administration's request for the resignations of all of the U.S. attorneys after Bill Clinton took office in 1993. "Was that a crime?" he demanded indignantly. "No," said Gonzales.

And let's not forget Rep. Randy Forbes, R-Va. Apparently Forbes meant to arouse sympathy for the beleaguered attorney general because he has so many, many employees to oversee. First he asked how many people work for the Justice Department, and the attorney general replied that there are about 110,000. Then he asked how many of those employees are lawyers -- and inadvertently revealed that Gonzales did not know this most basic fact about his department.

"Ten thousand to 15,000," said the attorney general -- a differential of 50 percent, as Dana Milbank observed in the Washington Post. But then again, his entire defense, as he reiterated repeatedly under questioning from the Democrats, is that he didn't know what his former aides Kyle Sampson and Monica Goodling had done in his name when they compiled the hit list of U.S. attorneys. After all, he had signed a secret document turning over his authority to those two junior political operatives, whose only qualification to bully their betters was their connection to Karl Rove.

Before Thursday's hearing, the New York Times reported that Gonzales believes he has "weathered the storm" and can continue in office despite his diminished status in the White House and on Capitol Hill and the widespread public belief that he is covering up a serious scandal. And he is right, unless Democrats and the handful of responsible Republicans have the courage to press their investigation to its logical conclusion -- which may well be his impeachment.