"Survivor: Fiji" ends in broken promises -- so why is everyone smiling and holding hands? 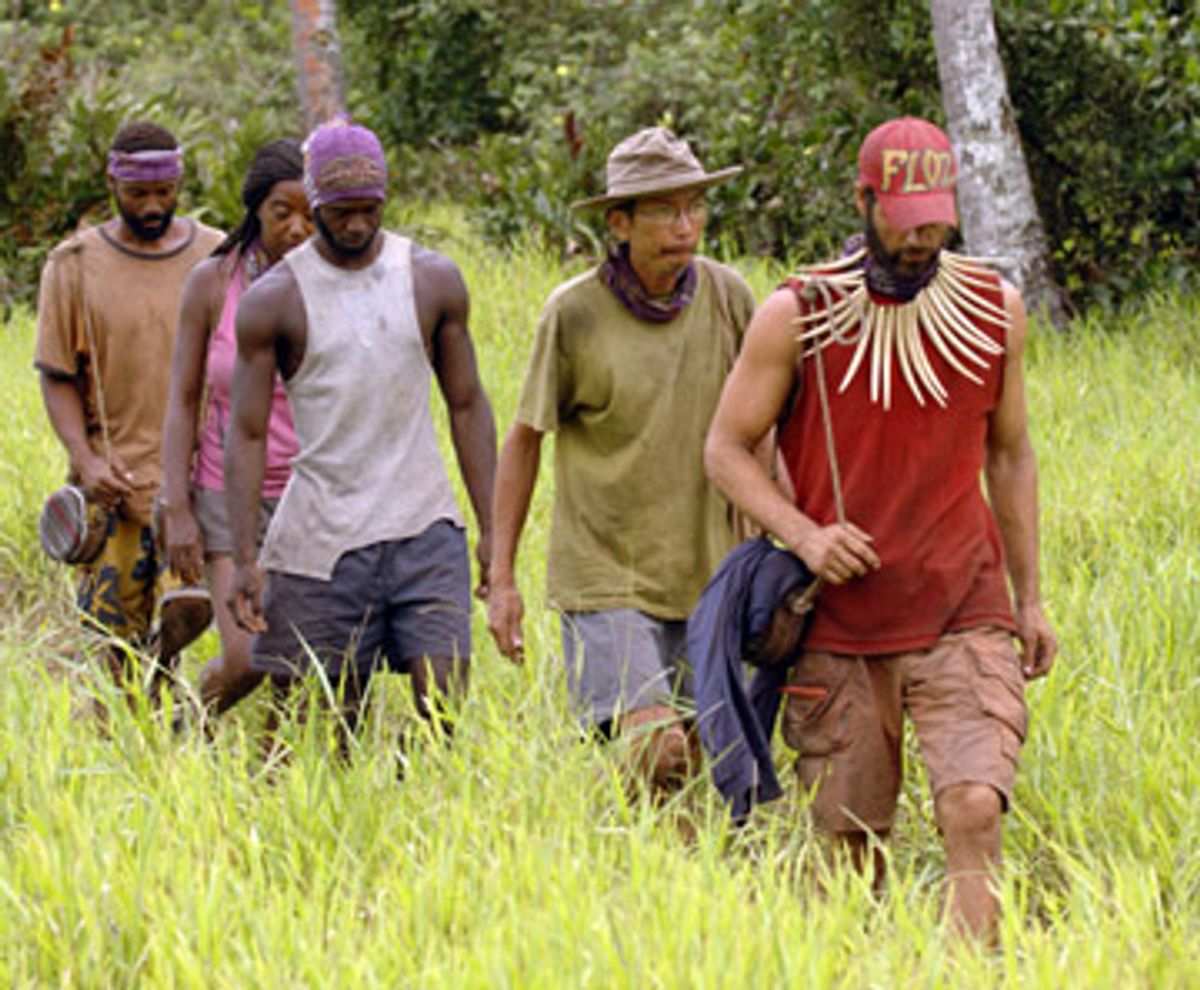 [Spoiler alert: Contains serious spoilers. Do not read this if you still plan to watch Sunday night's finale.]

"Survivor: Fiji" will go down as the season in which a little old Asian guy almost won it all, then lost it all thanks to an ill-conceived deal. But even if Earl Cole won the million-dollar prize, Yau-Man will definitely go down as the unsung hero of this very riveting season of "Survivor."

He looked like a dead man walking during the first few episodes of the game. Frail, older than everyone else, dorky -- these aren't words that one usually uses to describe the kind of person who wins the prize on "Survivor." But Yau-Man had a few tricks up his sleeve: He made friends with Earl, a likable, smart leader on his tribe who knew how to rally his tribe members. Earl and Yau-Man collaborated to find the immunity idol hidden on the island. Then, much to everyone's surprise, Yau-Man started winning challenges for his team, and then for himself, throwing arrows with accuracy, solving puzzles quickly and figuring out the proper method to tackle each new obstacle course. He even figured out when to play his immunity idol. (You have to bring it out before the votes are read, so you need to know when you're at risk -- not an easy task, given how many times players in this game have been blindsided over the years.)

But in the end, Yau-Man's biggest mistake was to trust Dreamz to make a deal and stick to it. Dreamz, a cheerleading coach who was homeless for part of his childhood, is a likable, charismatic guy, but he hadn't exactly proved himself trustworthy. After all, he'd already abandoned his first alliance in the game, leading to the dismissal of three of his supposed allies in rapid succession. He didn't just vote against them, either -- he leaked their secrets to the other competitors. Dreamz was always flying by the seat of his pants and getting away with it.

But when Yau-Man won a truck in a reward challenge, he knew how much Dreamz wanted it, so he thought he could use that to his advantage: Yau-Man told Dreamz that he'd give him the truck if Dreamz would promise to try to win immunity when it came down to four players, and then, if Dreamz won, give the immunity necklace to Yau-Man.

Dreamz told everyone he would honor his word. But later, when host Jeff Probst asked if Dreamz was going to keep his deal and give Yau-Man immunity, Dreamz covered his eyes in his hands and said no.

To be fair, Dreamz knew that if he gave Yau-Man immunity, he'd be the next to go. Yau-Man clearly should've assured Dreamz that he'd keep him in the game if he gave Yau-Man immunity. Instead, Yau-Man assumed that Dreamz would keep his word even though it meant Dreamz would be voted off. Like so many fallen "Survivor" players, Yau-Man was wedded to his own prediction of what would happen, and wasn't prepared for any other outcome.

When Dreamz failed to give up his immunity necklace, Earl seized the opportunity and joined Cassandra and Dreamz in voting off Yau-Man. Earl had to betray a man he said would be his "lifelong friend" because, as he later explained, he knew Yau-Man would've won it all if he hadn't voted him off. And a vote taken during the reunion special indicated that Earl was right -- the majority would've voted for Yau-Man.

Despite some last-minute ugliness, though, the finale capped off a thoroughly entertaining season of "Survivor," made all the more satisfying because, for once, the final four players were all likable people. Earl was one of the wisest and most charismatic tribe members from the start; Cassandra was always mild-mannered and retained a good sense of humor and an ease with the group through the worst of times; Dreamz played the buffoon when he needed to, but he pulled out the charm and made some convincing arguments at tribal council to save his own hide, time and time again; Yau-Man was self-deprecating and funny and punctuated his odd observations with an infectious, high-pitched giggle.

Incredibly, as the final four refused to sink their teeth into each other, other jury members showed their bad sides. Lisi attacked Cassandra ruthlessly for being a crappy player, even though Lisi may have been one of the whiniest, most emotionally volatile humans to play the game. Alex got condescending and bossy and scoldy to the final three, but what did he do in the game, really, other than make ineffectual alliances and compare himself to a Ninja repeatedly? And when Boo called Dreamz an "immature Christian"? Well, only an immature Christian would throw around such unfair labels.

While those three revealed their own arrogance and misplaced rage, Yau-Man graciously forgave both Earl for voting him out and shrugged off the fact that Dreamz went back on his word. Even though it was clear that Yau-Man wouldn't have voted Earl off, and would never have gone back on a deal with another player, he didn't fault them for making their own decisions. He may not have gotten rich or even been able to keep the truck that he won (which he was shocked to learn was worth $60K), but at least Yau-Man can enjoy the status of Most Lovable Underdog in "Survivor" History. There's got to be a book deal in there somewhere ...