Finale wrap-up: "The King of Queens"

The long-running sitcom ends its reign with a flurry of bickering, boxers and babies -- and, yes, a few misty eyes. 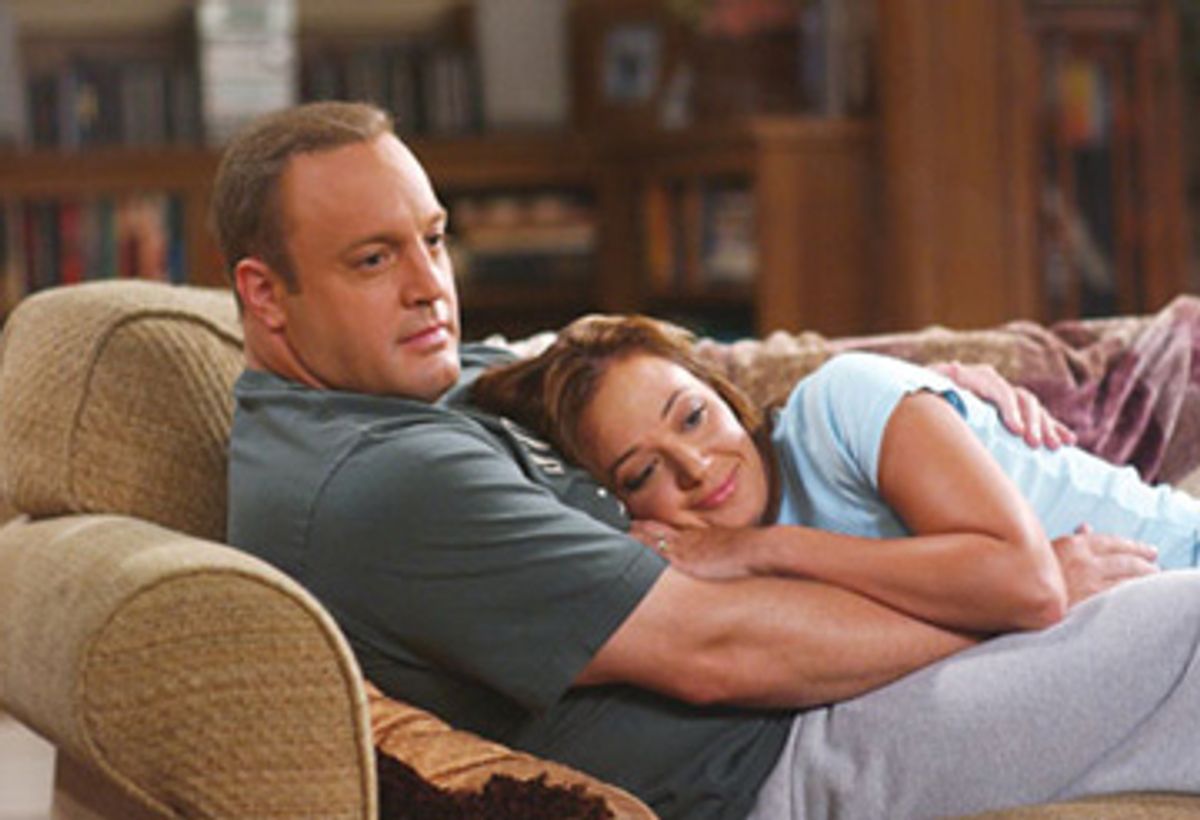 Monday night, after more than 200 episodes and nine seasons on CBS, "The King of Queens" stepped down from its sitcom throne. A scrappy outer-borough survivor, somehow "King," despite chronically lackluster reviews and musical chairs time slots, outlived both its dumpy cousins, like "Yes, Dear" and "Still Standing," and its overshadowing elder sibling, "Everybody Loves Raymond," to be the last live-action comedy of the 1990s still on the air. The exterior of Doug and Carrie Heffernan's modest brick Rego Park town house remained unchanged until the series' final scene -- and inside, our two protagonists were still going at it -- but the door won't be opening for us again.

At least, not until Wednesday night at 5. TBS currently runs reruns of the show in syndication, with back-to-back episodes filling up the early after-work hours. Millions of Americans come home each night, and in sync with Doug Heffernan (played by Kevin James), that luggish IPS deliveryman with a beer belly of gold, plop themselves on the couch and veg out. I feel some honesty is in order here: I'm one of them. And if I have some doubt about my qualifications to write a wrap-up of the series finale, it is because I have never paid much attention to the prime-time incarnation of "The King of Queens," and certainly haven't been following closely during this ultimate season. In my experience, "The King of Queens" has never been something to make time for: It is something that finds you -- on weekends or after a long day slinging paper, when you are bored or burned out or depressed. It's reliable, and for better or worse, things in Queens, N.Y., don't change much. Doug and Carrie just sneak up next to you, distract you with some fat jokes and some good old-fashioned marital bickering, punch you in the gut, and then smile and hand you a brew.

So that's my confession. Although I don't know who decided, I get the sense that smart people aren't supposed to like "The King of Queens." (They should stick to "Seinfeld" reruns, maybe?) But there's a flaw in that logic. From the start, the subversive comedic power of the "King of Queens" -- that gut punch before the comforting beer -- has been the way it sneakily overlays a cookie-cutter sitcom formula with a full cast of less than lovable characters and some deeply dark humor.

Its patently innocuous formula may be modeled partly on such golden-age classics as "The Honeymooners" and "I Love Lucy," but it has been in its moments of deviant behavior that "King" really shined. Doug might be the immature and lazy one, and Carrie (played by Leah Remini) an ambitious, upwardly mobile sophisticate: There's nothing unusual about that, especially given the fat schlub/sexy wife sitcom era during which "King" was conceived. But the disorienting curveball the show threw was that though he may have been lazy and full of harebrained ideas, Doug also happened to be surprisingly patient. And Carrie might have been a go-getter, but she was also selfish and shrill. Put plainly, Doug and Carrie were all wrong in just the right ways. They never had kids. They lied, got fed up with their in-laws, called each other terrible names. (In fact, one of my favorite episodes, "Window Pain," involves Doug and Carrie worrying that the neighbors overheard a fight in which Carrie called Doug an elephant and then threatened to burn down the house.) For nine seasons, no matter how petty and cheap and dysfunctional you felt, Doug and Carrie were reliably just as bad. Actually, they were worse. And that was "normal." Talk about feel-good comedy!

Still, even the darkest comedy can, in the hazy twilight of its run, grow susceptible to the temptation of neat ribbons and closure. So when I tuned in for the series' final episode on Monday night, my deepest fear was that the immature Doug and selfish Carrie and lunatic Arthur whom I've come to know and love would suddenly be replaced by functional cyborg selves, who'd get misty-eyed and rattle off sentimental speeches. Mercifully, that was only half of it.

Some background: The final episodes of the season have revolved around the question of whether Doug and Carrie will finally leave Queens and make Carrie's dream move into a Manhattan apartment. A fight over that apartment -- with Carrie wanting to go to "the city" and Doug stubbornly wanting to stay put -- eventually leads to the improbable decision to stay in Queens and adopt a Chinese baby. (If you think that's quite an extreme result -- well, you're right. But remember what I said about ribbons?) And what about Arthur, Carrie's crazy father (played by a scenery-chewing Jerry Stiller) who lives in their basement? He's getting married to a Liza Minnelli-esque lounge singer of course!

And so it happened that the final episode opened with Doug and Carrie dressing for Arthur's wedding. The first twist came quickly: Turns out that despite their reconciliation and her promises to the contrary, Carrie held onto the Manhattan apartment. Doug, predictably, sees it as a betrayal -- and after Carrie leaves to help her father prepare, Doug decides he must confront her and ask for a divorce. But first he has to take off his pants and sit around in his tux jacket and boxers and drink multiple six-packs. Believe it or not, it's funny.

The rest of the plot unfolds at breakneck speed. Arthur's bride leaves him at the altar, but he picks a new bride and gets hitched anyway. Doug gets even drunker and wrestles his friend Spence in the alleyway of the banquet hall. Then he gets still drunker and wrestles Holly, the dog walker they hired to baby-sit Arthur. Did I mention that Holly is now very, very pregnant? There are rabbi jokes, and gay jokes, and race jokes. The adoption agency text-messages Carrie to tell her that their baby -- "Ming May Heffernan" -- is ready for pickup. (Can that really be how it happens?) She goes to tell Doug the good news and he confronts her about her deception and suggests divorce. They have one last classic fight. (Doug: "Getting married, you think it's going to be great. But then 10 years down the line, you say, well, he's still fat. And she ain't getting any nicer, is she? Until it's just the two of us standing there fat, mean and naked." Carrie: "I forgive you for everything. You damn well better forgive me for this!")

And then it gets even uglier. A childish fight over who'll get Ming May -- the baby they don't even have and who we're not even really sure they want -- leads to an airport race for a flight to China, and it looks as if Doug and Carrie might really go out spitting and swinging.

But no. Well, not really. The bones of "King of Queens" may be brittle, but the heart is still soft, so, in the final 10 minutes, the creators of the series can't help offering some hope and sweetness amid the bile. There are some sentimental, revealing speeches, and a final plot twist (remember that old wives' tale about women getting pregnant as soon as they stop trying?).

The run closes, fittingly, with the sound of babies screaming -- and though the wails are not Doug and Carrie's, the looks on their faces promise that there is plenty more hilarious misery in their future. And those misty eyes? Well, it's up to you to decide whether they are a sign of love or just the sting of a sucker punch.