What happened to plain old vanilla?

Coldstone Creamery and other "mix-in" ice cream chains that lard their cones with cakes and candies make me long for a simple soft-serve swirl. 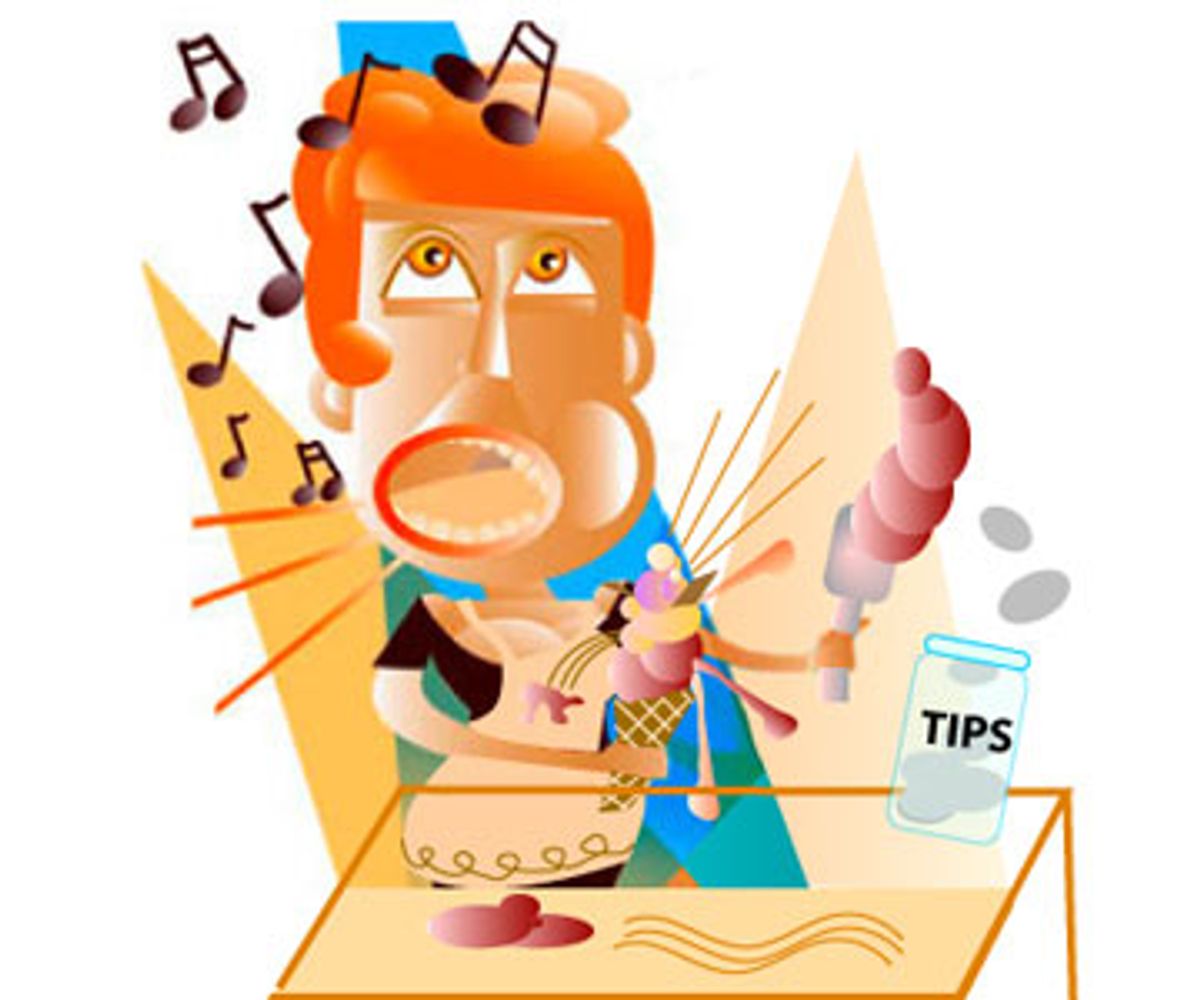 Last summer, while I was visiting my family in suburban Chicago, my sister told me about a new ice cream store that allegedly serves the richest, creamiest ice cream in the area. I consider ice cream to be a fifth food group, so this was thrilling news, indeed. But as she continued describing the shop -- they mix candy and cookies into the ice cream, the portions are gigantic, the employees sing in appreciation if they are tipped -- my excitement turned to despair. I knew what she was talking about. "It's a Cold Stone Creamery, isn't it?" I asked, already knowing the answer. My sister nodded her assent. "Have you been?"

They started appearing a few years ago, weedlike, on the suburban landscape, expensive-looking ice cream stores with chitty-chitty names: Cold Stone Creamery, or Marble Slab Creamery, or Maggie Moo's Ice Cream and Treatery. They sell rich ice cream with candy and other sweets hand-swirled into cups and cones. But the presentation is as much the product as the ice cream itself. Upon ordering, the customer chooses a base flavor and a "mix-in" or two (an assortment of chocolates, cookies and other sweets). The ice cream is scooped onto the titular chilled rectangular stone. Wielding metal paddles, the employee then smooshes together the mix-in and the ice cream like Edward Scissorhands on a lunch break, hopefully mesmerizing customers to the point where they don't notice they're paying upward of $5 for their simple sugar fix.

It's a novel approach to America's favorite dessert, and consumers are going for the concept like empty calories go to thighs. Ice Cream Reporter called Cold Stone "a comet in the frozen dessert firmament." An October article in the New York Times reported on the chains' rising profits and ambitious expansion plans. With just under 2,000 worldwide outlets between them and more on the way, the three major mix-in chains are poising themselves for icy dominance, leaving old stalwarts like Baskin-Robbins and Ben and Jerry's choking in their peanut-butter-and-Heath-bar-strewn wake.

The history of franchised ice cream isn't unlike a binge dieter's progress chart, with trends oscillating from decadence to lightness to decadence again. The first major ice cream chain was Howard Johnson's, which became known in the mid-20th century for the butterfattiest ice cream in the country. In the '60s, a team of British research chemists discovered how to double the amount of air in ice cream without sacrificing structural integrity, thus reducing the amount of ingredients needed (and the cost to manufacturers). This discovery led to the development of soft-serve ice cream and helped fuel the rise of mass-market chains like Dairy Queen and Baskin-Robbins. In the 1980s, the premium ice cream backlash began, with chains like Häagen-Dazs and Ben and Jerry's advertising butterfat-rich ice cream at nouveau-riche prices. Then came the early '90s and the ascendance of frozen yogurt merchants with cutesy, cheerleading names, like I Can't Believe It's Yogurt and TCBY: The Country's Best Yogurt.

Despite variations in flavor and presentation, these chains essentially sold the same product: pre-made ice cream, scooped from cardboard tubs or drawn from a nozzle, with chips or pecans or cookie dough already mixed in. The customized mix-in concept can be traced back to a guy named Steve Herrell, who started mixing candy into his homemade ice cream at his Boston-area ice cream stores in the 1970s. Houston's Marble Slab Creamery was born in the mid-'80s; Cold Stone and Maggie Moo's followed with their own twists on the concept. These stores appealed to two broadly American notions: the fast food ethic of complete customization, and the assumption that more is always better.

With philosophical underpinnings like those, the concept was ripe for franchising. And as they expanded across America, one crucial difference between the existing chains and these newcomers became clear: At the mix-inneries, the focus isn't so much the ice cream itself as the ice cream experience. The ice cream sold at premium parlors like Ben and Jerry's and Häagen-Dazs is an end in itself. Sure, it can be customized (a waffle cone, sprinkles, a banana split), but the customization is auxiliary to the central product. But at Marble Slab, Maggie Moo's and Cold Stone, the auxiliaries -- the mix-ins, the theatricality, the dC)cor -- are the lifeblood of the enterprise. The ice cream itself almost seems like an afterthought.

Mix-ins are a great concept, in theory. Ice cream is delicious. Cake and candy are delicious. Simple digestive mathematics dictates that combining the two should double the delicious. But, somehow, these stores get the equation all wrong. For starters, the ice cream itself has a vomit-inducing heft, gloppy and voluminous, like lard coated in Cool Whip. The employees are aggressively perky, the dC)cor is cutesy and contrived, and the high prices let you know that it's all intentional. In their attempts to present an immersive dessert-based entertainment experience, these stores instead evoke what the world of 1984 might have looked like if Big Brother had wanted to control men's stomachs along with their minds. But given that the ice cream itself is the least important part of the deal, this shouldn't be surprising. For the mix-ins to be effective, the base in which they're smooshed can't be too distinctive, can't hit any notes other than an anonymous and stultifying drone: Rich and empty, nauseatingly sweet and vaguely artificial, it's the Paris Hilton of ice cream.

It is generally easy to guess at an ice cream chain's target demographic. Ben and Jerry's is for lapsed liberals who support the rain forest by eating ice cream. Häagen-Dazs is for aspiring Eurotrash. Baskin-Robbins is for families that drive minivans. Dairy Queen is for families that drive conversion vans. But mix-in ice cream? Type "Cold Stone" or "Maggie Moo's" into the search field of any online foodie message board and you'll find a wealth of bad reviews and nasty comments. Bad ice cream, overhyped presentation, high prices. Who, besides 7-year-olds, actually likes this stuff?

Cold Stone thinks it knows. The company specifically targets 25- to 34-year-old women who diet intermittently, have the money to treat themselves, and are fully invested in the idea that super-rich ice cream is the sort of decadent reward that they deserve. It doesn't matter if the ice cream tastes good, it just has to be naughty -- and what's naughtier than a big bowl of Mud Pie Mojo ice cream?

I can think of few things less appealing. I've eaten a lot of mix-in ice cream over the past year, a task that has seemed increasingly penitential as it progressed. I ordered simple French vanilla from Cold Stone; from Maggie Moo's, a concoction called Better Batter Cake Carnival (cake batter ice cream, Twix bars, cookies and fudge); both were unfinishable. Whereas a visit to Ben and Jerry's or Häagen-Dazs leaves me wanting more, a visit to Cold Stone leaves me wanting a salad and a shower.

It's not just the terrible ice cream that makes me feel that way. Cold Stone, Maggie Moo's and Marble Slab traffic in corporate cheer, an unctuous and ultimately sinister occupation. For example: If an independently owned ice cream store were to name its portion sizes "Like It," "Love It" and "Gotta Have It," the cutesy monikers would likely have derived from a single person, a bubbly and enthusiastic owner, perhaps. This nomenclatural exuberance would give the impression that the proprietor loves ice cream as much as the customer does, and, in that sense, would help forge a real and human bond between buyer and seller. When the 1,400-location Cold Stone Creamery chain gives its portion sizes the aforementioned names, it's an exercise in deception. There's no real interplay between consumer and merchant other than at the cash register.

Moreover, the whimsy isn't even that whimsical. The stores tout the fact that their concoctions are mixed on marble slabs (which evokes nothing so much as the morgue you'll end up in if you eat too much of their product). They advertise the "show" their employees put on in mixing the ice cream, feats of dexterity that can be matched by any preschooler and surpassed by any teppanyaki chef. At Cold Stone, the employees are instructed to sing whenever they're tipped. Far from promoting a sense of fun, however, it just seems hopeless, like the forced smiles of a Potemkin village's inhabitants. If this is the face of modern decadence, give me austerity.

The most obvious analogues to mix-in ice cream stores are super-premium coffee shops like Starbucks, businesses that make millions selling sugary and expensive blended coffee drinks that cater to the infantile taste buds of a nation raised on ketchup and Dr. Pepper. Indeed, the mix-in chains are openly patterning their expansions on the Starbucks model. "I saw an opportunity to reinvent a stagnant category like what happened with coffee," Cold Stone's CEO told the New York Times. But Starbucks sells real coffee, too -- and that's a crucial distinction. If Starbucks only sold Frappuccinos, its customer base would eventually dwindle to teenagers and apprentice diabetics. What's the lifespan of an ice cream store where the ice cream is the least important part of the overall dessert equation? How long can it persist in selling the cherry instead of the sundae?

With three major franchises jostling for market share in the same regions, it's reasonable to think the mix-in bubble might soon burst. Indeed, some franchisees have already brought a class-action suit against the corporate headquarters of Marble Slab Creamery, charging that the company overstated the profit levels that franchisees could reasonably expect. And in March, in an attempt to challenge Cold Stone's market supremacy, Maggie Moo's and Marble Slab were bought out by NextCen, an investment company that also owns Athlete's Foot shoe stores and the Bill Blass clothing line. (Though both of the ice cream brands will continue to exist independently.) No matter what, if the chains are pinning their hopes on the caprices of fad bingers, they'd better be prepared to deal with what will inevitably happen when Bridget Jones starts taking her diet more seriously and defects to Jamba Juice.