From munching parties to Slim-Fast to Atkins, we've spent centuries trying to lose weight -- despite all the evidence that diets don't work. 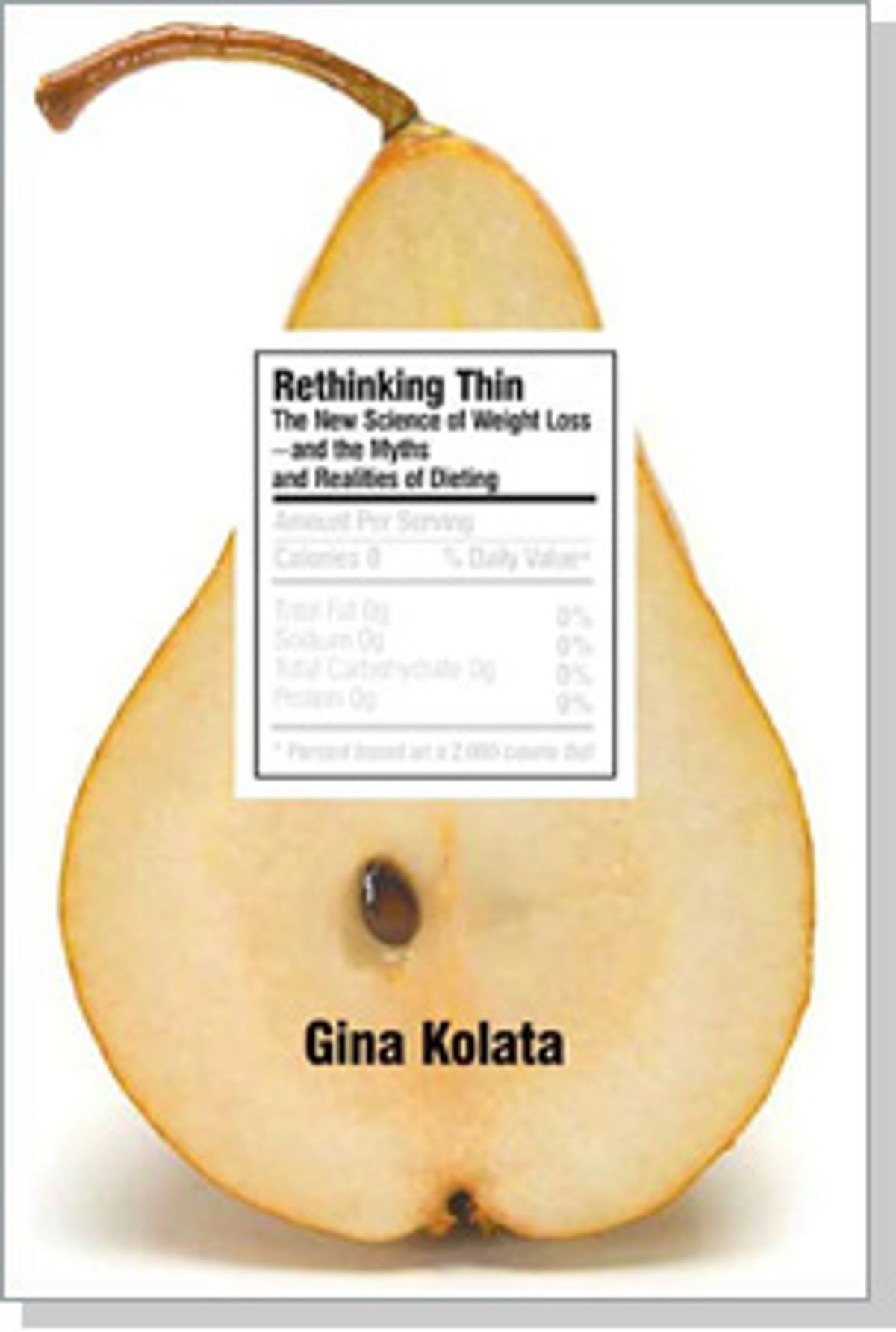 William Banting might be the most important 19th-century London coffin-maker that nobody's ever heard of. In 1862, he was a mess: sick, unhappy and so fat that he had to heave his way downstairs facing backward. He could not tie his shoes without the aid of boot hooks. He tried everything to shed the weight: taking "the waters and climate of Leamington many times," consulting the best doctors in England (including one who, cryptically, tried to "blister" his ears), and even vigorously rowing "a good, heavy, safe boat" for two hours a day. But he could never manage to lose more than 6 pounds. Finally, desperate, he found a doctor who advised him to abstain from foods containing starch or "saccharine matter": bread, butter, milk, sugar, beer and potatoes.

After a year on this proto-Atkins diet, Banting had reduced his weight to 156 pounds. He was so delighted with himself that he wrote and published a pamphlet on his methods, declaring that "I hold the reins of health and comfort in my own hands ... It is simply miraculous." His "Letter on Corpulence, Addressed to the Public" was snatched up by readers eager to find their own miracle, and for the next 50 years or so, "banting" actually became a household word for dieting.

Banting's diet was certainly not the first -- people restricted food intake for cosmetic reasons even in Ancient Greece -- but his success, and his success in promoting his success, opened the door for a stream of diet gurus who are still passing through: Sylvester Graham, inventor of the eponymous cracker (acolytes lost so much weight on the Graham diet that they resembled "mummies preserved in saffron," according to one contemporary account); John Harvey Kellogg, inventor of the eponymous cornflake (he was also a proponent of cold rain douches, and yogurt enemas); and best of all, Horace Fletcher, who was known as the Great Masticator for his theory that all food -- even milk -- should be chewed at least 32 times. "Fletcherism" was the South Beach Diet of the 1890s -- celebrity adherents like Upton Sinclair, Henry James and John D. Rockefeller helped spread the gospel. Ten years later, Fletcher Clubs had popped up throughout the country, while in England, enthusiasts organized "munching parties," during which each mouthful of food had to be chewed for five minutes.

This all sounds grotesque to modern ears -- certainly unscientific, possibly harmful -- but if we tweak the details, the story could easily be our own. Early 20th-century remedies like Marjorie Hamilton's Quadruple Combination System of Fat Reduction and Elfin Fat Reducing Gum Drops have given way to Nutrasweet and Fen-phen, but we're still desperate to get the weight off by any means possible, even in the face of overwhelming evidence that it's not possible to keep it off. The proliferation of fad diets, from low-fat to low-carb to grapefruit, is Exhibit A: We've tried everything, and nothing works. We've tried everything because nothing works.

In "Rethinking Thin," Gina Kolata attempts with some success to provide a comprehensive history of the diet, a survey of 20th-century weight-loss research, and a personal saga of several determined dieters enrolled in a University of Pennsylvania study on weight loss. But the history, though fascinating, is slipshod and deplorably organized, and the Penn dieters might as well have been left out of the book: Kolata's pale, clinical prose makes her effort to characterize these men and women feel perfunctory. At times, she seems to be going out of her way to highlight the most inane possible quotes from their counseling sessions.

Kolata, a New York Times science writer with an advanced degree in mathematics, is at heart a technician; she obviously loves to pick apart the clockwork of scientific studies, but she's not so keen on interpreting them, on explaining what these results might mean in the context of American society. The book is also badly in need of a good editing; to resort to the inevitable metaphor, it's distractingly flabby.

That's too bad, because if Kolata's ideas were more developed and polished, this would be a very important book. Even so, she manages to map out the strange disconnect in 20th-century America between our rapidly increasing social and commercial commitment to weight loss, and the rapidly increasing number of scientists who were discovering that it just didn't work.

The first of these was Jules Hirsch, a researcher at the Rockefeller Institute in the '50s, who noticed that the fat cells of the obese were bigger and more numerous than those of their thin counterparts. When he put a group of overweight people on a hardcore, Slim-Fast-style liquid diet, their fat cells shrunk, but the number of cells stayed the same, and the weight they had lost so painstakingly piled right back on as soon as they started eating real food again. Hirsch and his colleagues were shocked at the failure of such a sustained and scientific effort to make fat people thin -- there was no "cheating" here, no lack of commitment -- and they tried again and again. The result was the same every time: The subjects regained the weight; their metabolisms slowed by almost 25 percent until they did. It was as if their shrunken adipose tissue was desperate to restore itself. The conclusion of the Rockefeller paper? "It is entirely possible that weight reduction, instead of resulting in a normal state for obese patients, results in an abnormal state resembling that of starved non-obese individuals."

In fact most of the subjects, reduced to "healthier" weights, were acting disturbingly similar to a group of young men enrolled in the famous University of Minnesota "starvation study," in which they were asked to lose a quarter of their weight, just to see what would happen. (One of the charms of this book is seeing how few of these classic experiments would be deemed ethical today.) The men promptly fell to pieces, hoarding food and kitchenware; becoming obsessed with recipes, cookbooks and dietetics bulletins; and neglecting their non-food relationships. One man complained that "If [my girlfriend and I] see a show, the most interesting part of it is contained in scenes where people are eating." (Could the recent rise of an obsessive national food culture, complete with celebrity chefs, pornographic cookbooks and an all-food-all-the-time TV channel, be attributed to the fact that we are collectively starving?)

A number of subsequent studies also suggest that weight is genetic and cannot be dieted away for long. A group of 540 adopted children in Denmark were found to be, with few exceptions, as fat or thin as their biological parents, no matter what they were fed, no matter how much they exercised. And a mathematical analysis of Swedish twins (apparently Scandinavian governments keep great records) found that 70 percent of body weight is genetic, which means that, as Kolata memorably puts it, "a tendency toward a certain weight is more strongly inherited than nearly any other tendency, including those that favor the development of mental illness, breast cancer, or heart disease." It's not surprising, then, that when a curious scientist decided to reverse the Rockefeller study by asking a group of skinny prisoners to gain weight in the name of science (again, just to see what would happen), the men struggled mightily; even shoveling in fatty foods at the rate of 10,000 calories a day barely produced an effect, and they lost the weight as soon as they quit the regimen.

So why haven't Americans gotten the picture? Kolata blames the diet industry and public health officials: Their financial interest in keeping people fat and dieting has caused them to whip us into a "moral panic" over obesity. She doesn't delve very far into the topic, but it's a fascinating one: Why do we still cling to a twisted Puritanism that equates slimness with virtue? Why do dieters who "cheat" with some extra chocolate tell themselves, "I've been bad today"? Why do we weigh kids in gym class and plaster their BMIs on their report cards? Why do we continue to read and write vicious editorials like this one that suggests people should be charged for airplane seats by weight?

At the same time, it's unequivocally true that more Americans are becoming obese (the most recent statistics put the figure at 65 percent), and one important question that "Rethinking Thin" does not address is how we can balance our response to anti-fat hysteria with our responsibility to ensure that all Americans have the information and the ability to maintain a weight that is healthy for them. Perhaps personal health shouldn't be a moral issue, but it is, partly because the poorest Americans are disproportionately the fattest. Kolata is quick to discount the effect of environmental factors on obesity, pointing out that low-income kids enrolled in a school program about healthy eating didn't lose much weight. When the program's creator suggests that it failed because it couldn't address larger issues within the community, Kolata turns up her nose, comparing him to a 19th-century scientist trying to justify bleeding patients with leeches.

But eating fruits and vegetables isn't bloodletting, and getting regular exercise is sound advice, not quackery. Perhaps the way out of this muddle is to create a verbal distinction between fatness -- a physical trait -- and obesity -- a health problem. A fat, active person is almost always healthier than a skinny sloth, and, as several scientists point out in the pages of "Rethinking Thin," there is no evidence that a healthy adult who happens to be fat needs to diet just for the sake of losing weight. In fact, the most comprehensive study of weight and mortality ever conducted has found that overweight people die at lower rates than either "normal" or superthin people.

Meanwhile, like Kolata's Penn dieters, we struggle on in spite of the evidence, banting, holding our breath.