Western do-gooders may want to help Africa stop the AIDS epidemic. But Helen Epstein's new book shows the most effective solutions are often the continent's own. 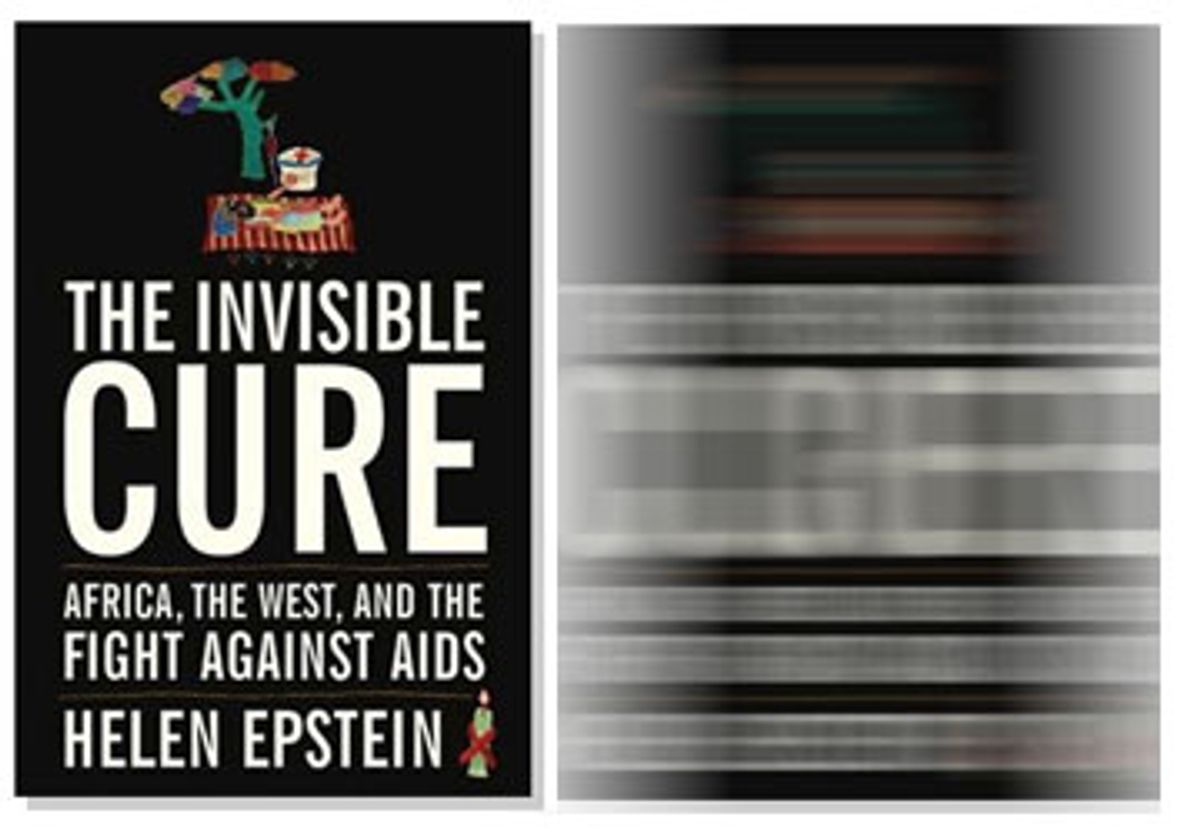 Helen Epstein is one of a rare species: the scientist turned storyteller, the specialist turned generalist. As she recounts in her illuminating new book, "The Invisible Cure: Africa, the West, and the Fight Against AIDS." Epstein went to the east African country of Uganda in 1993 as an idealistic young Ph.D. after hearing a presentation on research problems raised by the spread of HIV/AIDS in Africa. She decided to abandon her research in San Francisco on obscure aspects of an obscure aphidlike bug and place her formidable skills in the service of the largest public health emergency in the world.

At some cost to her academic career, Epstein joined the race to discover a vaccine that immunizes people against HIV/AIDS. In the early 1990s, the virus was still spreading, especially in sub-Saharan Africa, and the disease was then considered a death sentence. Having volunteered to work on a vaccine, Epstein traveled to a cancer institute in Uganda, best known for the bloody rule of Idi Amin but also viewed as a Mecca for AIDS researchers because of the virulence of the virus there and the vigor with which Ugandans were fighting back.

Within a few months of arriving, Epstein was smitten with the extraordinary resolve displayed by Ugandans in the face of a roaring epidemic. Alone among African countries, Ugandans drove down the rate of infection in the 1990s through means that remain both controversial and misunderstood. Epstein was only dimly aware of Uganda's achievement as it was unfolding around her, and years later, when she returned to the country, she wrote, "I felt like a pilgrim exploring a place where a miracle was said to have occurred long ago. Everyone had a different story about it and half the evidence was missing."

Piecing together an explanation for how (and to what extent) Uganda rolled back AIDS is one engine of Epstein's narrative. The other is the repeated folly of foreign-aid donors and the very experts who intervene with scant effectiveness. Her blunt, informed critique of the attempt by Westerners to save Africa from AIDS begins with herself: Epstein's own vaccine project is a failure. Analyzing strains of HIV/AIDS among Ugandans, she finds many types: not the answer her American sponsor -- the drug company Chiron -- wants to hear for the simple reason that the more varied the virus, the more difficult to craft a vaccine. Chiron asks Epstein to study her disease samples more closely, but the samples get lost in transit -- and with them Chiron's funding for further vaccine research.

Epstein's pursuit of an AIDS vaccine didn't last long, but her African expedition changed her life. She has worked extensively in Africa (where HIV/AIDS remains the biggest killer) ever since. And her engagement with the epidemic never ended.

Epstein first came to notice as a writer of trenchant essays on HIV/AIDS for the New York Review of Books. Her background as a molecular biologist gave her the scientific chops to "decode" the mumbo jumbo surrounding the medical aspects of the disease. But she also had a flair for describing the social context surrounding the illness -- and the courage and honesty to critically scrutinize the way aid donors, such as the Bill and Melinda Gates Foundation, the U.S. government and the United Nations, as well as global pharmaceutical companies, dominated the public health response to AIDS, both technically and financially. Because of Epstein's incisiveness, "The Invisible Cure" has been eagerly awaited. And the book does not disappoint.

As Epstein's title suggests, she is a skeptic about the entire international response to HIV/AIDS. "Much of this book is concerned with donor-funded AIDS programs that failed in some way, beginning with my own vaccine project," she says early on. "I tell these stories not with a sense of satisfaction. I could not have done better myself at the time. But in science, failures are often as important as successes, because they tell us where the limits are. Only by looking honestly at our mistakes can we hope to overcome them."

In many ways, Epstein is telling an insider's story of technocracy, how a closed community of experts try to deliver a "silver bullet," a one-size-fits-all cure for a many-headed, diverse menace. Her writing is indeed a form of therapy for misguided experts who either ignored or dismissed or merely failed to comprehend Africans and the context of their lives. These experts, Epstein shows, were not selfless interveners, either, but part of an international business -- a kind of AIDS Inc. -- that avows to serve ordinary Africans and too often benefits chiefly foreigners. In a telling meeting with a Ugandan doctor, she recounts the common view among Africans that there are only two types of AIDS: the "slim AIDS" that afflicts (and ultimately kills) them and the "fat AIDS" that "afflicts doctors, bureaucrats, and foreign consultants with enormous grants and salaries."

Epstein -- virtually alone among popular writers on the subject -- treats people with "fat AIDS" with cynicism and outrage. For them, "AIDS is a career move, an adventure, an experiment," she writes.

Fighting AIDS in Africa is messy, confusing and often irrational, which makes Epstein's reliable tour so valuable. With great discipline, humility and verve, she eschews both sob stories (of dying Africans) and praise songs (of devoted foreigners, contemporary Schweitzers) and instead carefully dissects the tactics used in the many battles she witnessed in the African AIDS war.

War stories of this sort can often have the feel of a special pleading, as if the author were out trying to settle old scores whose import (or even existence) few can remember. Epstein avoids this common pitfall, adopting a clear, honest voice that is as unsparing toward herself as toward others. Drawing partly on the techniques of travel writing, and mustering some of the zeal of a muckraker, Epstein fashions a unique account of one of the most hashed-over stories of our generation. In her hands, the subject is fresh, surprising and, perhaps most important, understandable in plain English.

Epstein is especially good on the two questions that have bedeviled others who have grappled with the topic. Why did AIDS begin in Africa? And why has the disease hit eastern and southern Africa so much harder than virtually everywhere else in the world?

Her answer to the first question is succinct: HIV/AIDS jumped from chimpanzees to hunters in central and eastern Africa, as the latest research proves. Why, Epstein asks, if "Africans have been killing and eating monkeys for at least 50,000 years," did doctors not spot anything like AIDS there until the 1960s? Much like the great historian of Africa, John Iliffe, in his excellent 2006 book, "The African AIDS Epidemic: A History," Epstein convincingly presents "the possibility that new medical technologies introduced into Africa in the early 20th century [notably the widespread use and reuse of needles to deliver vaccinations in inoculation campaigns] sparked the global AIDS pandemic."

Epstein's discussion of why AIDS is so severe in eastern and southern Africa is also illuminating. She cites strong evidence that Africans are "not more promiscuous than heterosexual people in other world regions." Instead, Africans in these two subregions tend to have "concurrent" relations with a small number of people. The pattern gave rise, Epstein writes, "to a stable interlocking sexual network that served as a 'superhighway' for HIV." In Uganda, widespread encouragement of "zero grazing" (no sex outside a single partner) proved crucial in rolling back the disease, providing evidence for one of Epstein's central propositions: "When it comes to fighting AIDS, our greatest mistake may have been to overlook the fact that, in spite of everything, African people often know best how to solve their own problems."

As method or rhetoric, zero grazing never gained favor with international AIDS experts -- who instead put their weight behind campaigns for condom use, abstinence and frequent testing -- and the failure of this African concept to carry the day illustrates a wider failure to understand AIDS in African terms.

In the end, Epstein's subject is not just a scary disease but sexual and social relations between men and women in Africa. And her final indictment remains troubling and still all too accurate: Outside experts fail to grasp the social web in which the disease lives and thus continue to fail in their efforts to roll back AIDS.

The closest Epstein comes to identifying a single solution is in her section on the growing awareness that circumcised men are much less likely to contract HIV than are uncircumcised men. The popularity of circumcision among west African men may explain the relatively low rate of HIV in this subregion. In asking whether male circumcision is "a magic bullet after all," Epstein underscores another paradox: that a low-tech social tradition provides more protection against AIDS than high-tech, high-cost and imported medicine.

Epstein offers scant other solutions beyond urging outsiders to make more space for responses crafted by Africans themselves. Her advice is worth noting, especially since spending on AIDS in Africa, as Laurie Garrett recently highlighted in an article in Foreign Affairs, is soaring. Increased funding for AIDS will only compound past mistakes, Garrett argues. Epstein is similarly concerned that in the coming explosion of international funding to fight HIV/AIDS in Africa, past errors will replicated as foreign donors mistake the size of the checks they write for their potential to help ordinary Africans.

Ultimately, "The Invisible Cure" concludes that success in the war on AIDS in Africa "depends critically on a sense of commitment and will" on the part of Africans. Epstein is right, once again. Yet her conclusion is sobering for those rooting for a quick end to suffering in sub-Saharan Africa. In a timely warning to foreign do-gooders with fat checkbooks, Epstein suggests that an African commitment to fight AIDS effectively "cannot be bought." Instead, victory must flow out of a rebirth of African self-reliance. Yet if outsiders cannot supply a quick fix to what ails Africa, and Africans themselves must shoulder the heaviest burden, the spectacle of AIDS devastation is likely to persist for years to come.

G. Pascal Zachary writes frequently about Africa and is a former foreign correspondent for The Wall Street Journal. He is writing a memoir, to be published by Scribner's, about his marriage to an African, the Nigerian Chizo Okon.