The first cheesy, delectable chapter of "Ugly Betty" closes -- how else? -- with carnage, car crashes and catfights! 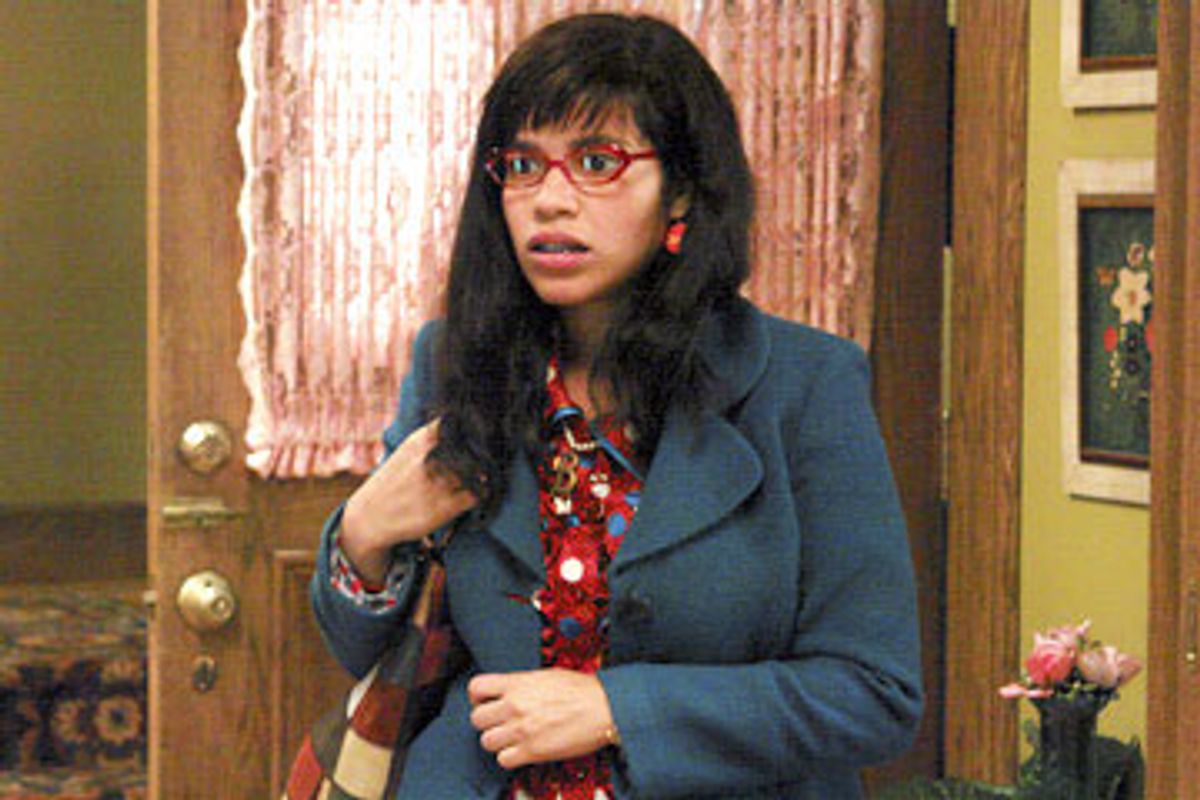 The manic delights of "Ugly Betty" ended in a high-speed cliffhanger Thursday night with Daniel and Alexis careening in a car with no brakes, Claire Meade busting out of jail, Amanda discovering that she might be Fey Sommers' daughter, and Betty chasing down Henry just as Charlie spirited him away to Tucson by telling him she was pregnant. As usual, the twists and turns in the road were less important than the sum total of the ride, a bouncy, rollicking trip in a colorful, cartoon double-decker bus.

In its first season on the air, ABC's "Ugly Betty," the American version of a telenovela that's popular in seemingly every single country on the planet, never disappointed. Whether or not you particularly cared whether Daniel (Eric Mabius) and Sophia (played by executive producer Salma Hayek) would end up together or what would happen to Ignacio (Tony Plana) in his quest for citizenship or who Fey Sommers really was, each episode was packed with sly jokes, rapid-fire references, absurd digressions, vibrant, larger-than-life sets and a parade of funny, ridiculous characters. In a fall lineup full of self-serious suspense serials, "Ugly Betty" was like an extravagantly dressed, wisecracking eccentric aunt in a roomful of drab killjoys in sensible shoes.

And unlike the other dreary shows that expected you to invest half a season just to uncover a few big revelations, you could start off any episode of "Ugly Betty" completely uninvested, only to get caught up in the farcical fun by the end of the hour. Whether it was the indefatigable sweetness of Betty (America Ferrera), the catty joys of Marc (Michael Urie) and Amanda (Becki Newton) or the campy schemes of tireless villainess Wilhelmina (Vanessa Williams), there was always something to suck you into the show's sugary charms.

On Thursday night, the most entertaining diversion in a season finale packed with entertaining diversions may have been Wilhelmina and Marc, who discovered that Flavia, one of the magazine's top advertisers (a parody of Donatella Versace played with disturbed genius by Gina Gershon), has booked St. Patrick's Cathedral for her wedding, on the very same day Wilhelmina had planned to marry Bradford Meade (Alan Dale) there.

Wilhelmina: Flavia? That little Euro wench is getting married?!!

Marc: And she got Elton John to sing for the wedding. He's rewritten "Candle in the Wind" for her.

Wilhelmina: What? He was rewriting "Candle in the Wind" for me!

Marc: Give that queen 20 bucks and she'll rewrite it for anybody.

Soon Wilhelmina has sold Marc into assistant slavery to Flavia in exchange for her reservation of St. Patrick's. Marc becomes a part of Flavia's posse, clad in black from head to toe, and he's forced to smoke, eat pasta and clean up after her little dog. Flavia has big ideas for her upcoming spread in the magazine: "And for this layout, Flavia have vision. All of the models should look like they're suffering from sickness of radiation, like Chernobyl. But this time, it is my makeup that makes them glow!" Ah, the absurdity of the fashion industry, laid bare in a few lines.

In another excellent twist, Christina (Ashley Jensen) stumbles on the secret room at the Mode magazine offices, where Amanda is getting drunk by herself.

Christina: Oooh my God! It's Faye's love dungeon! It's real!

Amanda: (Angry) And now my special place is ruined!

Christina: Oh please, your special place was ruined years ago.

Christina and Amanda get trapped in the secret room, but open a safe that reveals Amanda just might be Fey's best-kept secret. Meanwhile, Betty finally confesses her true feelings to Henry (Christopher Gorham), only to discover that his recently dumped girlfriend, Charlie, is pregnant. But then Betty discovers that Charlie may be having a secret affair with Betty's orthodontist! She has to stop Henry from leaving with Charlie! But is it too late?

Even with the fantastical, weightless frivolity of it all, even with references galore (the finale alone included nods to prison drama "Oz," '70s TV comedy "That Girl," children's book "Dora the Explorer" and Broadway hit musical "Sweeney Todd"), the show still features scenes that pack an emotional punch. When Daniel unravels in a pill-addled haze and confesses to his long-lost brother, reimagineered as a woman named Alexis (Rebecca Romijn), that he has missed him all these years, the scene is genuinely sweet and sad.

But nothing quite tops the last hair-raising sequence, in which Henry and Charlie board a plane to Tucson, Alexis and Daniel crash, and Hilda's (Ana Ortiz) fiancé (and Justin's [Mark Indelicato] dad) is shot by a thief holding up his corner store. As Justin sings the last heartbreaking song in his school musical, "West Side Story," Hilda discovers that Santos has been shot.

It's sad -- almost too sad -- until you remind yourself that you're still on that crazy double-decker bus, and it'll get to some brand-new, gloriously silly location in due time. But that's the sneaky little trick of "Ugly Betty." Like the title itself, you're not really supposed to take it completely seriously, or get emotionally wrapped up in its characters -- but you just might anyway. * * * * For more coverage of the season finales of your favorite TV shows, click here.