It had to be hard for the high-achieving candidate's wife to give up her career -- and I'm in a feminist fury about it. 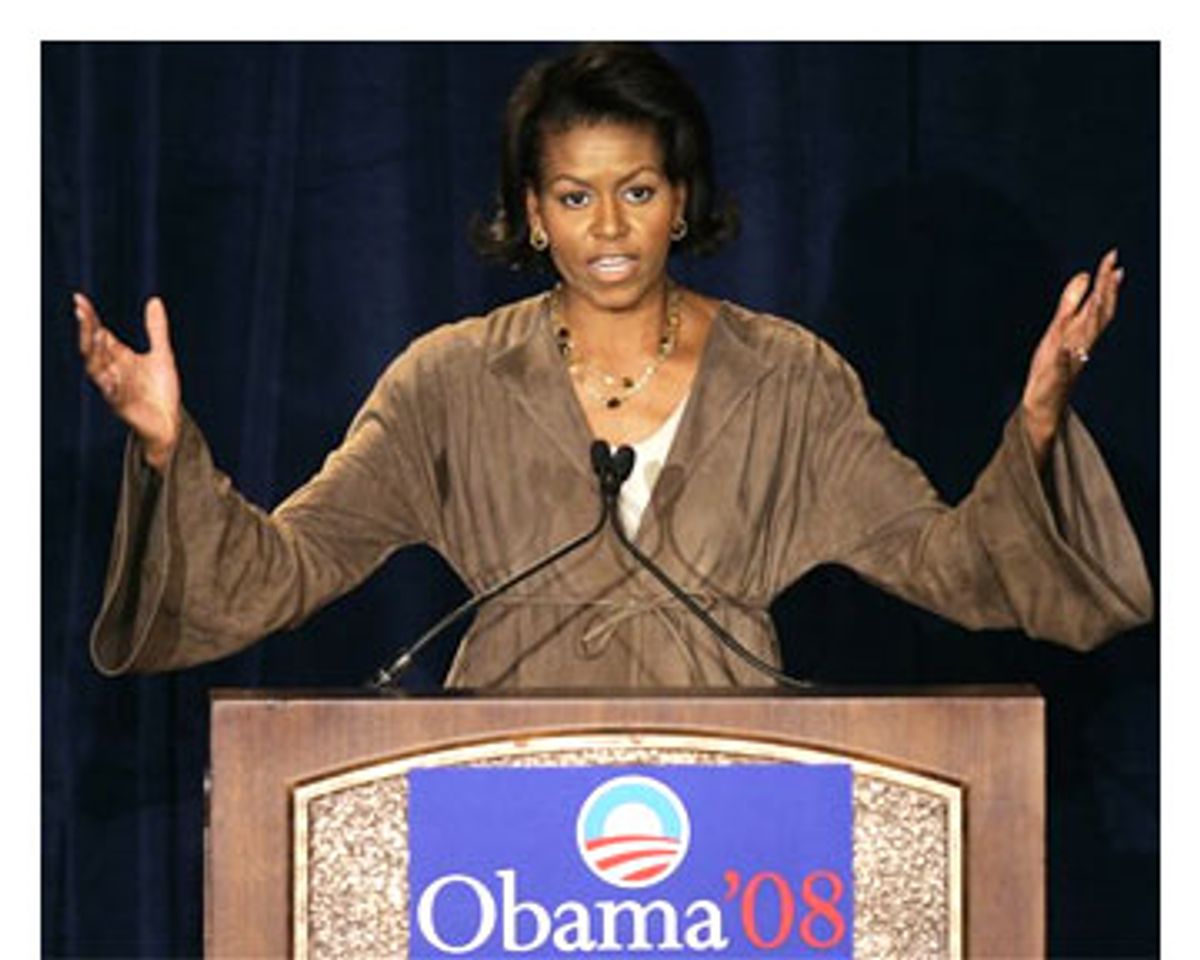 You knew it had to happen.

Damn it all, Michelle Obama has quit her $215,000 dream job and demoted herself to queen. Though the party line is that she's only "scaled back" to a 20 percent workload, I doubt her former co-workers will bother alerting her to many staff meetings. She's traded in her solid gold résumé, high-octane talent and role as vice president of community and external affairs at the University of Chicago Hospitals to be a professional wife and hostess.

Now, the energy and drive that had her up jogging before dawn and a gratifying day of work and family will mainly be spent smiling for the cameras. Just as we watch curvy, healthy-looking singers and actresses like Lindsay Lohan become anorexic too-blonde hoochies before our very eyes, so we're now in danger of having to watch the political version of that process: Any day now, Michelle Obama's handlers will have her glued into one of those Sunday-go-to-meeting Baptist grandma crown hats while smiling vapidly for hours at a time. When, of course, she's not staring moonstruck, à la Nancy Reagan, at her moon doggie god-husband who's not one bit smarter than she is.

My heart breaks for her just thinking about it. Being president will be hard. So will being first lady for the brilliant Michelle -- imagine, having to begin all your sentences with "My husband and I..."

I'm in a feminist fury about Michelle (I'll use her first name to avoid confusion with her husband) feeling forced to quit, but make no mistake: I'm not blaming her. Few could stand up to the pressure she's facing, especially from blacks, to sacrifice herself on the altar of her husband's ambition. He could be the first black president, you know! Also, she must be beside herself trying to hold things together for her daughters. I'm blaming the world and every man, woman, child and border collie in it who helps send the message that women's lives must be subordinate to everyone else's.

No doubt her modern, progressive husband assured her she didn't have to quit -- probably even tried to dissuade her. It's also quite likely she's making this sacrifice so her children will have at least one parent available. But the result is the same. Our daughters grow up knowing that their freedom to work at hard-won, beloved careers hinges on the doings of their husbands.

Still, there's an opportunity in this setback. Now is the time for feminism to reach out to black women via the contingent of Obama-esque overachievers out there who ought to be chilled to the bone by Michelle's retirement from work of her own. Given Secretary Rice's, not to mention Oprah's, persistent singleness, black women who have earned high status may well wonder why they should bother trying to both date and develop successful careers if one's going to cancel out the other. No other group is less likely to marry. Given the innate conservatism of the black community, the burden to tend to hearth and home falls disproportionately on its women, sending the message to ambitious black girls that they can't have both fulfilling careers and families.

It would be one thing if Michelle had tired of working, but she's clearly ambivalent about leaving paid employment, as the Washington Post's recent coverage made clear:

"Every other month [since] I've had children I've struggled with the notion of 'Am I being a good parent? Can I stay home? Should I stay home? How do I balance it all?'" she said. "I have gone back and forth every year about whether I should work." When she finally winds down her duties as vice president of community and external affairs at the University of Chicago Hospitals in the days ahead..., she said, it "will be the first time that I haven't gotten up and gone to a job." "It's a bit disconcerting," she said. "But it's not like I'll be bored."

No, you'll have your well-manicured hands full being your husband's hostess in chief. Funny how she didn't mention her husband's parental angst; there have been whispers that he's been pretty busy, too, what with being the great black hope and all. Wonder what finally made her decide to quit.

While I'm not blaming Michelle, I am issuing a challenge: This political and professional sutee won't end until women refuse to step into the fire, disapproval be damned. Sen. Clinton can't do everything: The rest of us women must stand our ground. Whatever else you think of Clinton, you can't deny that she blazed a trail for women's right to work and, like, be smart in public. And, man, what a beatdown she got. Since it was bringing about the end of the civilization as we know it, she caved, took her husband's name and gave up a public policy role; she had to wait, like a good girl, until her husband couldn't run for anything else. Valuable years of productivity, wasted. But at least giving up her career wasn't Hillary Clinton's first choice, as it is for most of the elite women who are abandoning their careers.

Linda Hirshman was an early observer of the phenomenon of top-tier women leading the retreat back to the kitchen. Following up a controversial article, "Homeward Bound," with an equally controversial book, "Get to Work," she harshly chastised elite, well-educated women for choosing not to work once they married high earners. Using census data and interviews, she argues that:

As a result of feminist efforts -- and larger economic trends -- the percentage of [working] women ... rose robustly through the 1980s and early '90s. But then the pace slowed. The census numbers for all working mothers leveled off around 1990 and have fallen modestly since 1998. In interviews, women with enough money to quit work say they are choosing to opt out. Their words conceal a crucial reality: the belief that women are responsible for child-rearing and homemaking was largely untouched by decades of workplace feminism ... Among the affluent-educated-married population, women are letting their careers slide to tend the home fires. If my interviewees are working, they work largely part time, and their part-time careers are not putting them in the executive suite.

I am not saying Michelle Obama is just another member of the so-called opt-out revolution; clearly, her reasons for leaving her job are historic -- and even so, she clearly seems pained to do it. And I hate to add to Michelle's load, but even though she's made the choice to leave work, I hope she'll keep her role in women's history in mind and increase the tiny inroad political wives have made into something approaching women's freedom of choice. With her personal wealth (albeit obtained by marriage) Theresa Heinz laid some groundwork, speaking her mind on the campaign trail and generally refusing to be mealy-mouthed and dull. Kudos to Dr. Judith Steinberg Dean, too, for refusing to give up saving lives to chat up reporters on her husband's tour bus. But until more women who want to work feel free to do just that, they'll continue to be mere appendages of their men, and the American workplace will remain just as family-unfriendly as it is now.

What can Michelle do? If Obama wins, she should go for it and take on a meaningful public policy role, à la Hillary Clinton's healthcare work. Just a lot more carefully. Why on earth should such an accomplished woman just arrange white-tie dinners? Until then, she should become more outspoken, building on her husband's willingness to confront dysfunction in the black community -- a black mother can get away with what no one else could. Obama has chastised blacks for apathy, for crime, for equating achievement with "acting white," for allowing their neighborhoods to deteriorate; Michelle's street cred as a churchgoing, "round the way" sister who made good makes her "ghetto pass" (her ability to operate as an insider) irrevocable. There will be no discussion of whether or not she's "black."

Since the Obamas are liberals, Michelle is bullet proof. Anyone who dares to insult her with the same level of vitriol as has been visited on Hillary Clinton and leading white Democrats like Nancy Pelosi or Dianne Feinstein will be trampled by a herd of black ministers, civil rights leaders and church ladies in big hats. (Condoleezza Rice doesn't get the same protection.) In a post-Imus world, any critiques of Michelle had best be worded very carefully. She could also build on her husband's interfaith pioneering with mainstream organizations to bring the resources of those well-endowed communities to bear on black problems.

Of course, "black" problems are really American problems; having the golden couple spearheading the fight will make it sexy to help blacks with their systemic problems (education and entrepreneurship, to name two). The two Obamas can de-race these issues (here is where she can use her fancy education) and help America understand that black progress is American progress.

Most important, though, I hope Michelle will bring feminism to black women.

Feminism is rightfully criticized for being irrelevant to black women and ignoring their issues. When it's not plain arrogant, that is. An excellent example of mainstream feminism's high-handedness is Maureen Dowd's recent petty bitching about Michelle's jabs at her husband on the campaign trail. She sounded like a 1940s white woman reprimanding a "sassy" black maid. But feminism's failure to engage with black women is only partly its own fault; black men have worked hard to reinforce the image of feminism as not just "white," not just lesbian, not just a plot to make contented black women unhappy with their lot but also (as usual) a war against black men. This black male victimology has been so successful at changing the subject whenever black women complain that, 20 years after Anita Hill was successfully demonized as a tool of white feminists for daring to "bring down" a prominent black man, here's Michelle's tortured answer to the Washington Post's F-question:

How difficult it must be for someone so whip smart and so famously blunt, according to insiders, to have to mouth these political pieties. But if we know nothing else about Michelle Obama, we know she's determined to live in the world the way it is, not the way it should be. But she's in a prime position to help change all that.

Now is the perfect opportunity for the movement to reach out to black women by embracing Michelle and black women's causes in general. Progressive women should be working their way toward the middle ground a political wife must occupy and politely engineer ways in which Michelle can put her postelection time, win or lose, to worthy causes important to the black community -- welfare-to-work, hiring and job training, for example.

But even as I seek silver linings, I'm still sad for Michelle. As the Times reports, "She expresses no regret about scaling down her job ... where colleagues say she excels at tackling thorny problems. But this winter, after spotting a book on the Obamas' coffee table celebrating Mr. Obama's Senate victory, her staff created a matching volume of her accomplishments. Mrs. Obama wept when she saw it."

Problems don't come much thornier than this. You've got a right to sing the blues, Michelle, so go ahead and cry. Then take action.