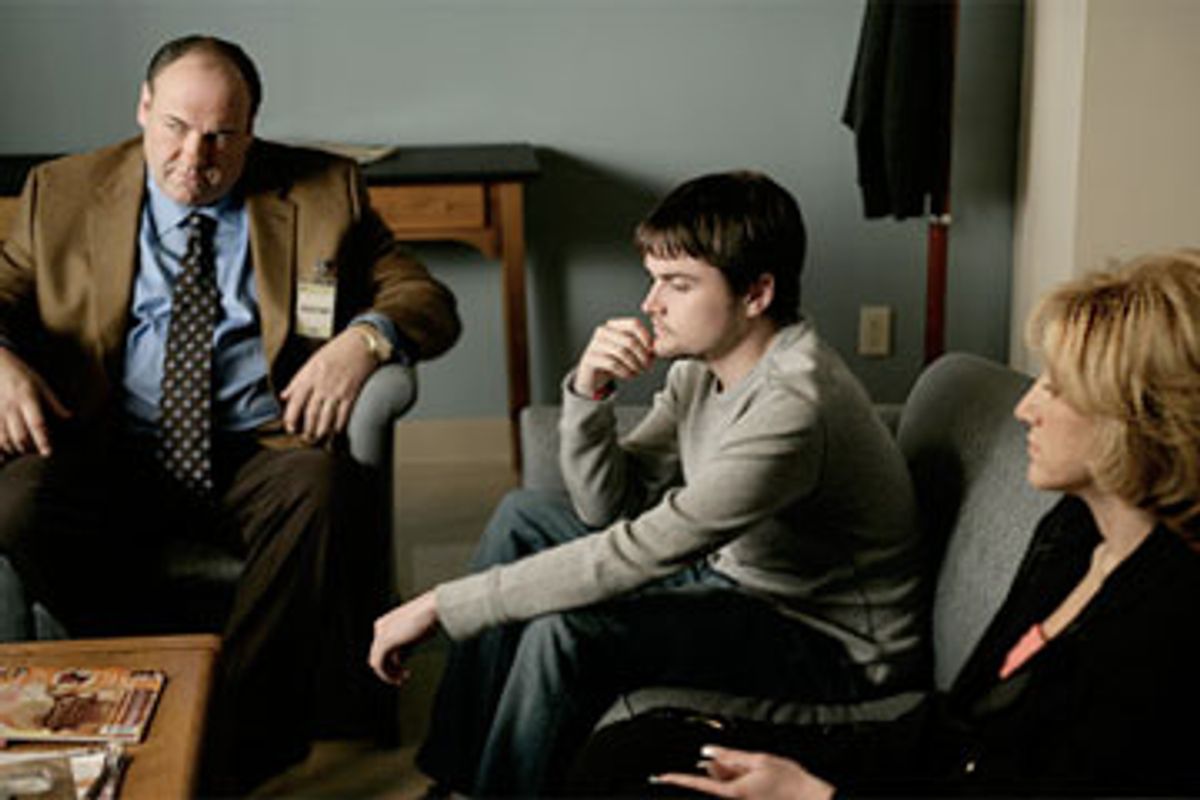 The blood-dimmed tide is loosed, and everywhere
The ceremony of innocence is drowned;
The best lack all conviction, while the worst
Are full of passionate intensity.
-- W.B. Yeats, "The Second Coming"

David Chase's epic drama series "The Sopranos" has never skirted the depravity of its characters. But after enduring the last few episodes of this last chapter, we discover that we've been let off the hook for years: There was murder, yes, but there was also baked ziti in the fridge, and there were bad jokes and smart remarks and naked girls and ungrateful kids and temperamental mistresses. Sometimes Tony murdered people casually, the way other people mow the front lawn. Other times he killed close friends and family members and it plagued him and made him sick. But he always escaped death and prison. He maintained his sanity, and shook off the shadows of the past. At the end of the day, his family was safe and well fed. Even after his brush with death at the start of this season, he emerged feeling that every day was a gift.

These days, every day may be more of a curse than a gift. The things Tony has struggled to hold together are starting to fall apart: His authority in the mob hierarchy is openly threatened by Phil Leotardo, and there's no way out. His marriage is suddenly crumbling, his friends look more like strangers, and his naive innocence about himself is gone, thanks to the realization that even Christopher saw him as "some asshole bully."

And then there's his son, AJ. Just as the first season of the HBO show found Tony struggling with his mother, now Tony wonders if he's just as merciless and self-pitying a parent as she was. AJ has never believed in anything, really, aside from Blanca and her son. Now that they're gone, everything looks like bullshit to him, from the meat industry to foreign policy. "Do you realize we're gonna bomb Iran?" he asks Meadow.

"You need to learn to shut stuff out," she tells him. "Are you crazy?" he asks. Is she? Is AJ just a whiny, spoiled little brat? Or is Meadow's peace with the world based on denial, a skill she inherited from her mother?

AJ is walking a thin line between prophetic and pathetic. In his English class, they're reading those terrible lines from Yeats, repeatedly endlessly, yet the words never lose their sting, least of all today. AJ is right to be haunted, of course, and it's almost refreshing to see him taking something seriously for once in his frivolous, unexamined life. But when Meadow tells him to set some goals for himself and move out of their parents' house, he says, "Look, I'm ill, Meadow. All right, I'm on medication. I need mom's cooking. It could mess with my blood chemistry."

Even AJ is ready to blame those "purtrid fucking genes." He reminds his parents what his grandmother Livia said in the hospital before she died: "It's all a big nothing." Has he inherited a curse of chemistry, or just a bad habit of feeling sorry for himself?

You really have to hand it to Chase and the other writers: Each of these last episodes seems to pack more of a punch than the last. This last chapter started with a sigh that's built to a scream: Tony goes from reminiscing about the ducks at the lake, to suffocating Christopher, to pulling his son out of the pool, tied to a cement block. Every step of the way, whether he's dealing with Phil Leotardo or Carmela or AJ, Tony's not sure whether to fight or retreat. "What's wrong with you?!" he bellows at AJ by the edge of the pool, then softens and strokes the boy's hair. "All right... Are you all right? Come on, baby. Are you all right, baby? Are you all right?"

"He was always so happy. He was our happy little boy!" Carmela says, crying, and her agony makes Tony and Meadow crumble. "What did I do wrong?" Tony later asks, and we can name a few things, but is he right to blame himself?

But as always, just when we're tempted to feel for them, they turn on us: When Tony confesses that the whole thing has him depressed, Carmela turns brutal and won't hear another word. "He didn't get it from my family, that's all I'm going to say." What could be more heartless, after your son attempts suicide, than to blame it on your husband and his relentless self-pity -- or is it just in his genes? Even Carmela can't decide which it is -- she'd like to blame Tony for both.

Of course the fight ends with Carmela hurling the brand new watch Tony gave her at his face. "You are my life," is what Tony had inscribed on the watch, and still Carmela accepted it with a casual kiss on the cheek, hinting that she knew it was just a gesture of guilt. We've seen coldness between them before, but this is different. They have no patience with each other. Their world is falling to pieces, and they still can't help but eat each other alive. But that makes sense, since their marriage, like the watch, is a fragile lie.

The absurdity of therapy is also on display here, along with the best joke of the season, when Dr. Melfi and Tony discuss AJ's attempted suicide:

Melfi: It could've been a cry for help.

Tony: Aren't you listening? He did cry for help. He's lucky I came home and heard him.

Later, Melfi's therapist, Elliott, tells her of a study he read about how talk therapy actually enables sociopaths instead of treating them. Chase is showing his hand now more than ever.

But even as we can hate Tony for his weaknesses and his bad decisions, even as we lament his apparent lack of deep remorse over Christopher's death, he's still a complicated human being that plays on our sympathies, either when he strokes AJ's hair and cries or when he brings him a pizza in the hospital. It's remarkable, really -- a character who feels this real, but who embodies so many conflicting impulses. But then, the best authors make us feel for characters who carry with them the best and the worst of human behavior.

And, of course, larger questions loom over these terrible scenes: Is depression a whiner's malady, a genetic legacy or a part of the human condition? Is Tony a sociopath enabled by anyone who'll listen to his whining, or is he an ugly reflection of our culture: lazy, self-indulgent, confused and morally adrift?

We can fold our arms and say, smugly, that Tony is finally going to pay for all of the evil he's wrought on the world, for all of the human beings he's thoughtlessly killed, for the asbestos floating up into the air, but the terrible truth is that we recognize ourselves in him, at least in some small way. We can hope that Tony pays for it all, but still cringe as we see his world slip out of his control. When Coco makes menacing remarks about Meadow, when Tony goes down and kicks the guy's head in himself, when Tony appeals to Phil "on a human level" and Phil laughs in his face and rejects his acts of contrition? Suddenly Tony doesn't seem to have any other choice but to fulfill his tragic destiny.

And what is Sil reading? "How to Clean Practically Anything." We have to wonder what Sil will be forced to clean up once that blood-dimmed tide rolls in.

How does it end? Tell us what you thought of Sunday night's episode, and what you think is in store for Tony and his family in the final two.