A spate of new books about opting out adds more fuel to the mommy wars. But will our focus on educated, well-paid women ever trickle down to less fortunate moms? 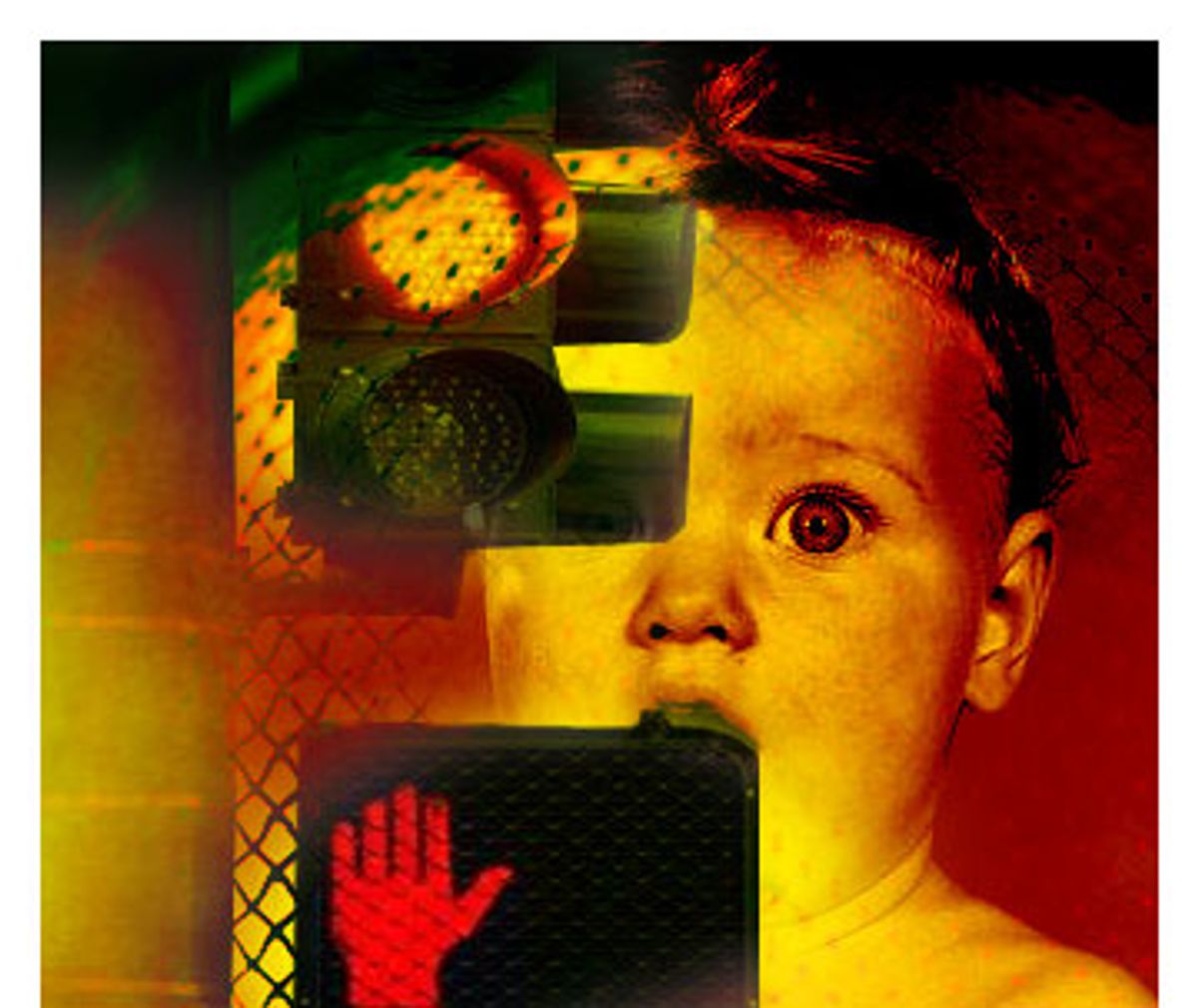 It was hard not to squirm, listening to Leslie Bennetts defend her book, "The Feminine Mistake: Are We Giving Up Too Much?" on WNYC Radio's "Brian Lehrer Show." The stay-at-home moms who called in seemed affronted by her argument that working mothers are both more secure and more fulfilled. And Bennetts sounded even angrier and more defensive, chastising listeners for not having read her book. But it wasn't until she whipped out her "very happy home life" credentials that the author sounded truly desperate. A Vanity Fair writer who points to her own ability to balance work and motherhood in her book, Bennetts felt the need to dispel nasty rumors that she was -- gasp! -- single and childless. On the contrary, she told listeners indignantly, she has two children and a husband, for whom she cooks dinner every night. The lowest blow having been blown -- questioning whether she is a mommy -- Bennetts momentarily gave up on trying to sell books to set the record straight: She is a mommy, and a damn good one.

Bennetts' publicity tour yielded so much hostility, I had to hope she was winding up and heading home soon to a nice, home-cooked meal with the family. And I hope the end is near for the extremely tiring battle over the so-called opt-out revolution. After all, how many times can we argue over whether highly educated women should stay in their corporate law or marketing or investment banking jobs after they have children? While we might be intrigued by tales of the corner office set texting their nannies on their way to a business trip in Hong Kong, most of us don't have their particular problems -- or options.

Despite Bennetts' protestations to the contrary, "The Feminine Mistake" focuses on a privileged group of women, as have many of the big motherhood books of recent years, including Naomi Wolf's "Misconceptions," Ann Crittenden's "The Price of Motherhood" and even Betty Friedan's "The Feminine Mystique," which arguably launched the whole conversation in 1963. What's more, the focus on individual choices obscures the public policies that make rearing children while earning a living so difficult for all mothers. If the "choice" is between working 80 hours a week or staying home full time, then it's not really a choice. Yet, as Joan Williams of the Hastings Center for WorkLife Law has pointed out, media coverage of the "opt-out revolution" has done much to contort the concept of individual choice to mask structural unfairness -- i.e., we end up attacking one another instead of fighting for paid maternity leave.

And then there's the nasty tenor of the whole discussion. It's not just Bennetts but everyone who argues that choices made by individual mothers are categorically right or wrong. The mommy wars are, of course, quite personal. Even if they feel they've chosen their path -- rather than been drawn down it by a special-needs child, an unexpected pregnancy or an unemployed husband -- most women don't feel totally confident they're doing it just right. And just as Bennetts doesn't want anyone casting aspersions on her personal life, it turns out that most mothers don't want to hear that they're doing something wrong. Nor do most want constant reminders of the unhappy but obvious fact that their husbands could die or leave them at any moment, which Bennetts repeats in her book.

To this unpleasant back-and-forth over women and work, Pamela Stone's "Opting Out? Why Women Really Quit Careers and Head Home" adds some much-needed substance. Rather than arguing that mothers should or should not stay home, Stone, a sociologist at the City University of New York, describes the complex reasons that 54 women left their high-powered positions after having children and how their lives proceeded from that decision. "Opting Out?" shows how a mix of forces conspired to nudge women out of their careers, despite the fact that most originally intended to stay in them. While her academic and decidedly not strident tone will probably not do a lot for book sales, it's refreshing to read a balanced take on the upsides and downsides to staying home with kids.

Among Stone's surprising findings is that most of the women she interviewed ditched their jobs not right after having babies, as you might expect, but when their first children were between 6 and 15 years old. How did they make it so long in the executive office only to slide back to the minivan after all? Stone details a pattern of attempting to adjust their workload or hours to be able to meet some family need -- whether school drop-offs or tending to a sick child -- and not only failing to get the flexibility they sought but also often getting punished for asking for it. Despite the notion that the pull of children brings mothers home, a series of discouraging pushes from the workplace were often the greater force in their decisions.

Stone also gives evidence of the depressing "yellow light" phenomenon in her subjects' marriages, in which women wind down their careers as their husbands simultaneously rev up theirs. (The name comes from the notion that women are more likely to slow down at a yellow light, while men tend to floor it.) Thus, wives who start out as their husbands' peers -- often meeting through their jobs -- end up deferring to the men's career needs, picking up the slack the men leave in domestic work and sliding into relationships that are unequal both financially and emotionally -- something Bennetts warns against.

The tendency among these high-powered women was to amp up domestic responsibilities to resemble their old professional ones. Many kicked into the kind of intensive mothering that Judith Warner described in "Perfect Madness: Motherhood in the Age of Anxiety," carting children to fencing practice and Mandarin lessons with the efficiency and stamina of, well, corporate executives. A good number also did high-level volunteer work, serving on the boards of local schools and civic institutions.

Yet even most of those who transformed motherhood into a high-powered job of its own eventually wanted to get back to paid work at some point. And it's at this juncture that many stay-at-home moms encountered the unexpected. Some hoped to reenter the corporate world but felt unable to. In what Stone calls "another Ophelia moment," women tended to lose confidence in their professional abilities after a spending time at home. And judging from the response many of the women got when they applied for jobs in their old fields, the work world seemed to reflect that low esteem back at them.

While Bennetts sees not leaving the workforce as the solution to the difficulties of reentry, Sylvia Ann Hewlett argues that the corporate world should accommodate the interruptions in women's work lives, each of which, she calculates, costs a woman 18 percent of her earning power. Hewlett, whose past books have tackled baby lust and the societal devaluing of parents, profiles the efforts of 11 huge companies to keep women in their ranks in her latest book, "Off-Ramps and On-Ramps: Keeping Talented Women on the Road to Success." Such "on-ramps" include allowing employees flexible schedules, compressed workweeks, job sharing, part-time options and the opportunity to return after extended leaves.

These innovations clearly make life more livable for women in corporate America, especially those in the extreme jobs Hewlett describes, who work upward of 60 hours a week and do things like get up in the middle of the night to have conference calls with clients in Asia. Some of the huge conglomerates that were part of a task force Hewlett chaired have already managed to retain more women in their ranks. A few female employees have even wrangled much-needed vacations. (I was particularly happy for one female executive Hewlett holds up for her apparently groundbreaking insistence on taking two weeks off every summer.) And -- according to Hewlett, anyway -- offering women flexibility has also been good for business.

But while Hewlett seems thrilled with the progress of corporate America, the exemplary programs she profiles are often available only to the cream of the already elite corporate crop. The very first example of a worthy workplace innovation, offered in the foreword by Carolyn Buck Luce, for instance, is available only to "high performing individuals" who work at American Express, and who apply to and are accepted by the program. Hewlett repeatedly refers to "top talent" and "highly qualified women," a privileged and apparently tiny lot. One outreach event she describes held by Lehman Bros. in London, for instance, resulted in the hiring of only four women.

Presumably, these are the lucky few -- the "talented women" of Hewlett's subtitle. But one has to wonder why we spend so much time talking about this privileged group of women when they are already vastly more likely to get flextime, paid vacation, paid maternity leave and sick days than are women with lower-paying jobs. Stone defends her narrow focus on efforts to save high-level women's jobs by arguing that "the larger cultural and organizational changes they bring about can trickle down (and up) to benefit women at every level of the organization."

But motherhood in this country isn't a trickle-down proposition. It's hard to see what benefit these incremental, voluntary efforts hold for the vast majority of women. Hewlett notes that men have hung onto the "male competitive model" for as long as they have because it benefits them and disadvantages women. They're fighting for themselves -- which is the corporate way, isn't it? Programs that give a high-heeled leg up only to the corporate elite seem similarly limited, especially when they're spun as a benefit to the company's bottom line. What if a humane work policy isn't going to mean a net gain? Perhaps more important, why do we insist on treating policies that make work livable like gold stars, handed out only to the best in the class? Why doesn't everyone get a livable life?

The question is enough to make a woman rethink the whole male competitive model, which, it turns out, many mothers do when they "opt out" of it for long enough. Intriguingly, in Stone's sample, many lost their taste for the fast-paced, big-money world after raising children and decided to become schoolteachers. In exchange for the whopping pay cut, they cited the flexibility of teaching as well as its ability to satisfy values that had been changed -- softened, even -- by stay-at-home parenting.

No doubt corporate America stands to gain from the infusion of these values when they employ women at the top, as Hewlett argues. But sadly, women in the rest of the country -- the vast "untalented" or, perhaps, just unlucky majority of mothers who not only work and take care of their kids but also are stuck watching the seemingly endless media sideshow that is the mommy wars -- probably won't gain a thing.

Sharon Lerner is a journalist and a senior fellow at the Center for New York City Affairs at Milano Graduate School, New School University.