This stylish story about a helpful angel come to Earth owes more to Audrey Hepburn than Jimmy Stewart. 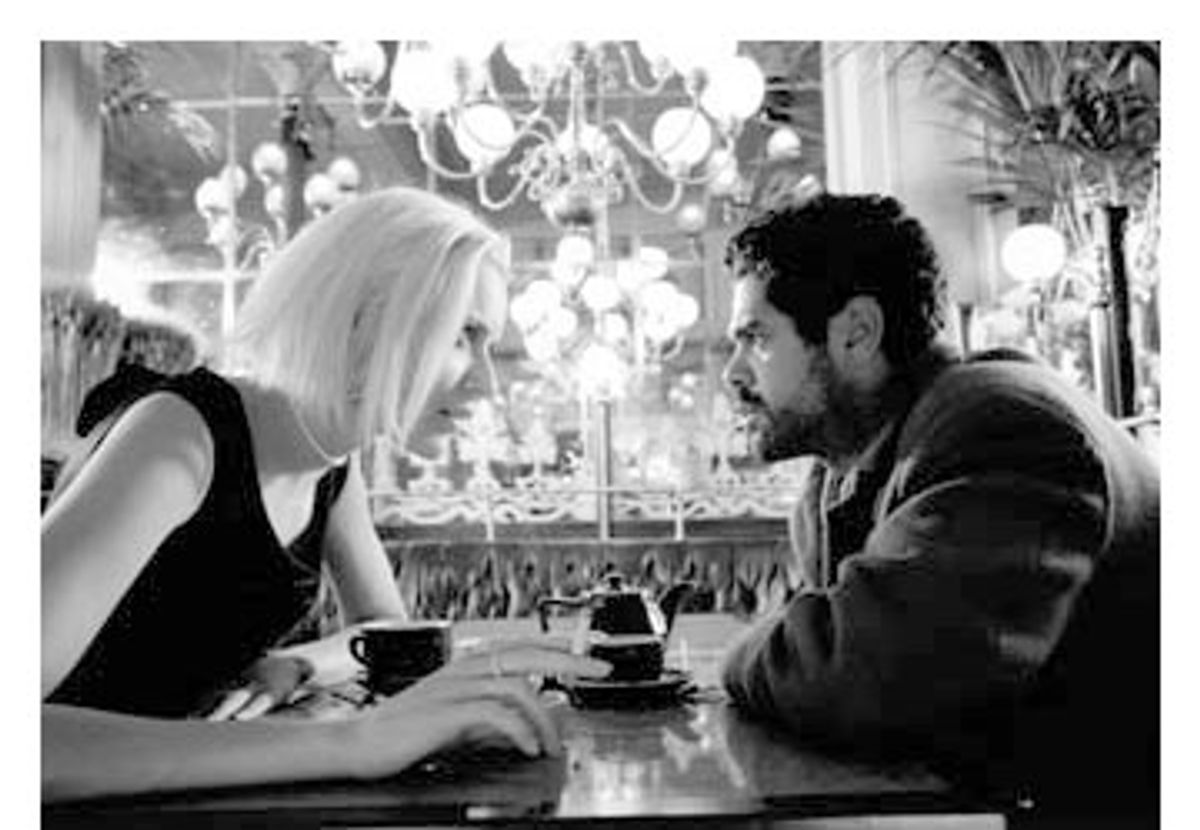 In Luc Besson's art-deco Parisian fantasy "Angel-A," Jamel Debbouze and Rie Rasmussen are a walking sight gag: Debbouze plays Andre, a stocky small-time hustler and would-be entrepreneur whose debts (and the thugs after him to collect) have driven him to attempted suicide. Just as he's about to jump off a bridge, a 12-foot-tall -- well, practically -- stunner with a shock of white-blond hair distracts him. This woman, Angela (Rasmussen), takes Andre under her wing, not-so-figuratively speaking, and proceeds to help him turn his life around, first by dispatching the money-grubbing creeps who've been threatening him. She's the Eiffel Tower; he's the Pyramide du Louvre: Together these crazily mismatched salt-and-pepper shakers wander the streets of Paris, ducking into nightclubs and cafes, smoking the occasional cigarette, and doing all the things you want movie Parisians to do.

"Angel-A" is a stylish swath of silk wrapped around a sentimental core. As the movie's title tells us, Angela isn't a regular human being at all: She's an angel who's come to earth to help the hapless but sweet Andre -- an American citizen, Moroccan by birth, who has come to Paris on business and gotten himself in trouble -- pull himself together. Angela's job is to make Andre respect himself -- there's even a scene, set in a bathroom grand enough to be called a lounge, where she urges him to face the mirror and tell himself, "I love you."

But Besson is enough of a madman -- a madman with more than a dash of sweetness in his heart -- to make even a syrupy scene like that work. "Angel-A" isn't as nutso as some of Besson's other pictures: It doesn't have the crazy inventiveness of, say, "The Fifth Element." As I watched it, I found myself wishing it were just a little loopier. But the picture is still seductive and pleasing, partly because Besson and his cinematographer, Thierry Arbogast (the genius director of photography behind Brian De Palma's "Femme Fatale"), have made Paris look like the kind of city you could visit only in your dreams. The picture is in black-and-white, and its texture is so velvety and luxe you want to reach out and touch it. This isn't just one of those stock travelogue-looking things, where nice-looking scenery pretty much takes care of itself. This is a Paris with character and personality, a living, breathing sidekick for the two main players.

Debbouze -- who played the very young soldier in Rachid Bouchareb's astonishing "Days of Glory" -- is a lovely actor, his tough-guy's baby face merely a mask for infinite layers of vulnerability. He has enough control over his performance, and his character, to keep the story from sliding too deep into sapville. And Rasmussen -- who was the temptress wearing a gold-and-diamond snake, and little else, in "Femme Fatale" -- is pure pleasure to watch. One of the complaints often leveled at sumpermodels is that they don't look like "normal" women. You can say that again: Rasmussen (who has worked as a model) is so tall she's unreal. Her willowy limbs appear to be attached with springs; there's a lovely gangliness about her walk, as if she were still becoming accustomed to the feeling of the earth beneath her feet. Angela spends the whole movie in a very chic, very narrow black sheath dress (it laces up the back, and it's easy to figure out why). And as far as food goes, she's a bottomless pit: She's always asking Andre when they can eat -- perhaps the food is better in Paris than it is in Heaven. An angel comes to earth to help out a guy in need: The obvious comparison to make would be to "It's a Wonderful Life," but Rasmussen's LBD-wearing, perpetually peckish Angela is more of a nod to Audrey Hepburn in Stanley Donen's "Charade." She's elegant in a careless, offhanded way. Sure, she came to Earth to help. But the chance to wear a great dress may have been part of the draw.