After Jimmy Carter caved to the Republican noise machine and took back his blast at President Bush, it's no surprise the party wimped out on the war. 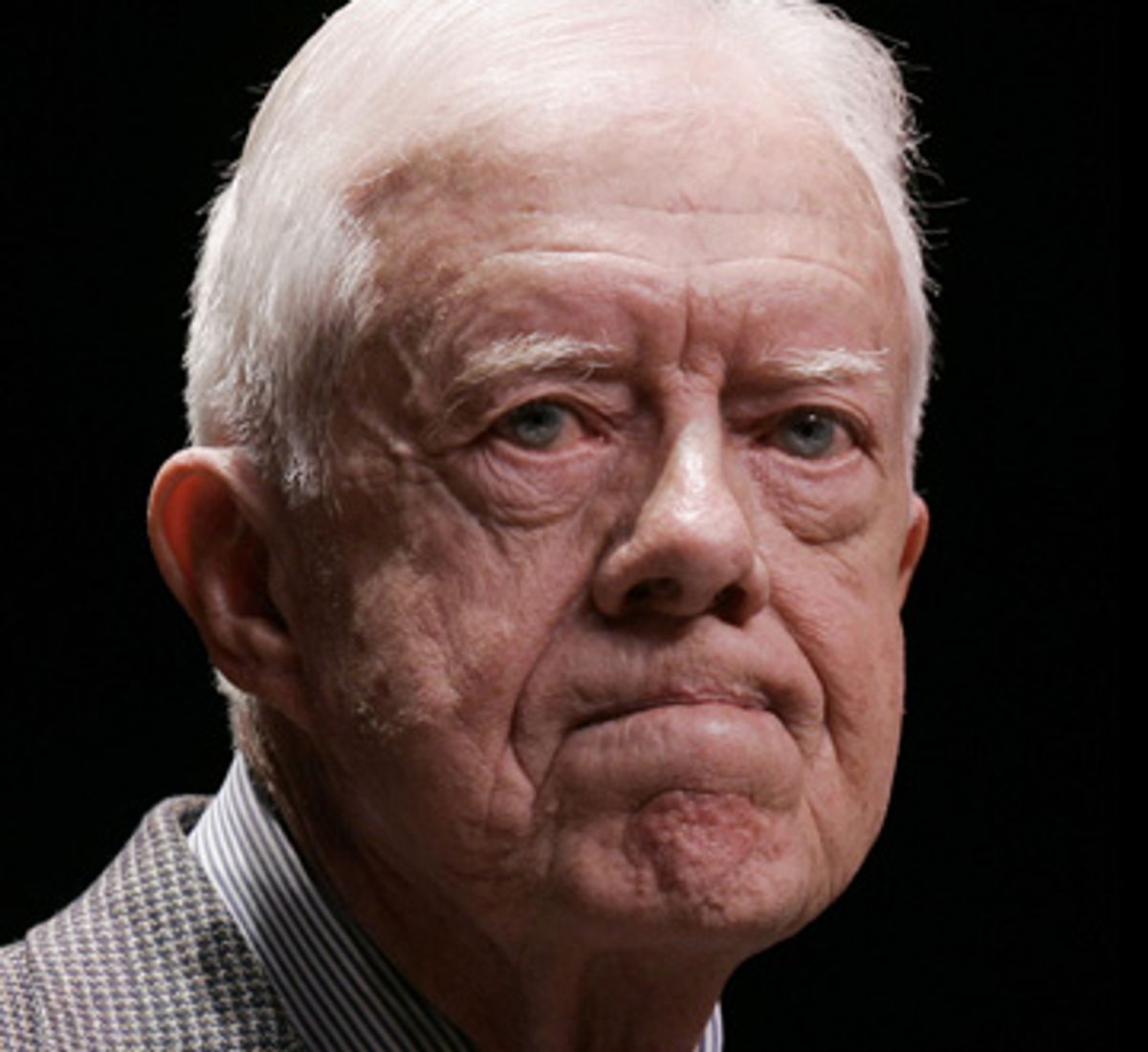 New Rule: Jimmy Carter must be shipped off to Guantánamo, stripped to his tighty-whiteys and "waterboarded" as an enemy combatant. Last weekend, former U.S. President and current al-Qaida operative Jimmy Carter launched an unprovoked attack upon democracy, America and our troops in the field by telling the Arkansas Pennysaver that the Bush administration has been "the worst in history." And then he threatened President Bush by saying, "I'm going to get on a plane and fly out there and straighten your ass out."

The Republican outrage machine is always invoking secret rules that liberals didn't know they broke. And apparently when you get to be president, they give you an employee's handbook titled "So You're Leader of the Free World -- Now What?" It tells you about the nuclear codes, where your parking space is, and to not talk smack about other presidents. But I was up all night on Wikipedia doing an exhaustive study of former presidents, and while other presidents have sucked in their own individual ways, Bush is like a smorgasbord of suck. He combines the corruption of Warren G. Harding, the abuse of power of Richard Nixon and the warmongering of James K. Polk.

I mean, who would you rank lower than George W. Bush? Nixon got in trouble for illegally wiretapping Democratic headquarters; Bush is illegally wiretapping the entire country. Nixon opened up relations with the Chinese; Bush let them poison your dog. Herbert Hoover sat on his ass through four years of calamity, but he was an actual engineer. If someone told him about global warming, he would have understood it before the penguins caught on fire. Ulysses Grant was a miserable drunk, but at least he didn't trade booze for Jesus and embolden the snake handlers -- he did the honorable thing and stayed a miserable drunk. Grant let his cronies loot the republic, but he won his civil war.

For some inexplicable reason Republicans have taken to comparing Bush to Harry Truman -- a comparison that would make sense only if Harry Truman had A) started World War II and B) lost World War II. Harding sucked, but he once said, "I am not fit for this office and never should have been here." So at least he knew he sucked. He never walked offstage like Bush does after one of his embarrassing press conferences with a look on his face like, "Nailed it." Bush still acts like every failure is just a friend he hasn't met yet.

Now, is it possible for a future president to perform as badly as Bush has? I suppose, theoretically, if we elect someone totally off the wall, like R. Kelly, or the reanimated corpse of Ted Williams, or Rudy Giuliani ... But let's be honest, we would have been better off over the past six years if the Oval Office had been occupied by an orangutan with a Magic 8-Ball. And that's why it's so depressing that when the right-wing noise machine pretended to get upset at what Jimmy Carter said, he did what Democrats always do and backed down. He said his remarks were careless and misrepresented and the sun was in his eyes and his hearing aid went out and he was molested by a clergyman.

They confronted him, and he took it all back. Which is what Democrats do. Why couldn't he have just said, "No, I meant what I said. And speaking as the first citizen of Habitat for Humanity, let me take out my toolbox and build you a house where we can meet and you can blow me." If a Democrat who's out of office and 100 years old can't speak out, what chance do we have for the ones who are in office? Like the ones who are in Congress now who, emboldened by widespread public approval of their plan to bring the troops home ... this week abandoned that plan. You see, you don't get to become the worst president ever without a little help from the other side.