Mississippi's GOP governor did a good job getting cash out of Republicans in Washington, but is he really doing a good job cleaning up after Katrina? 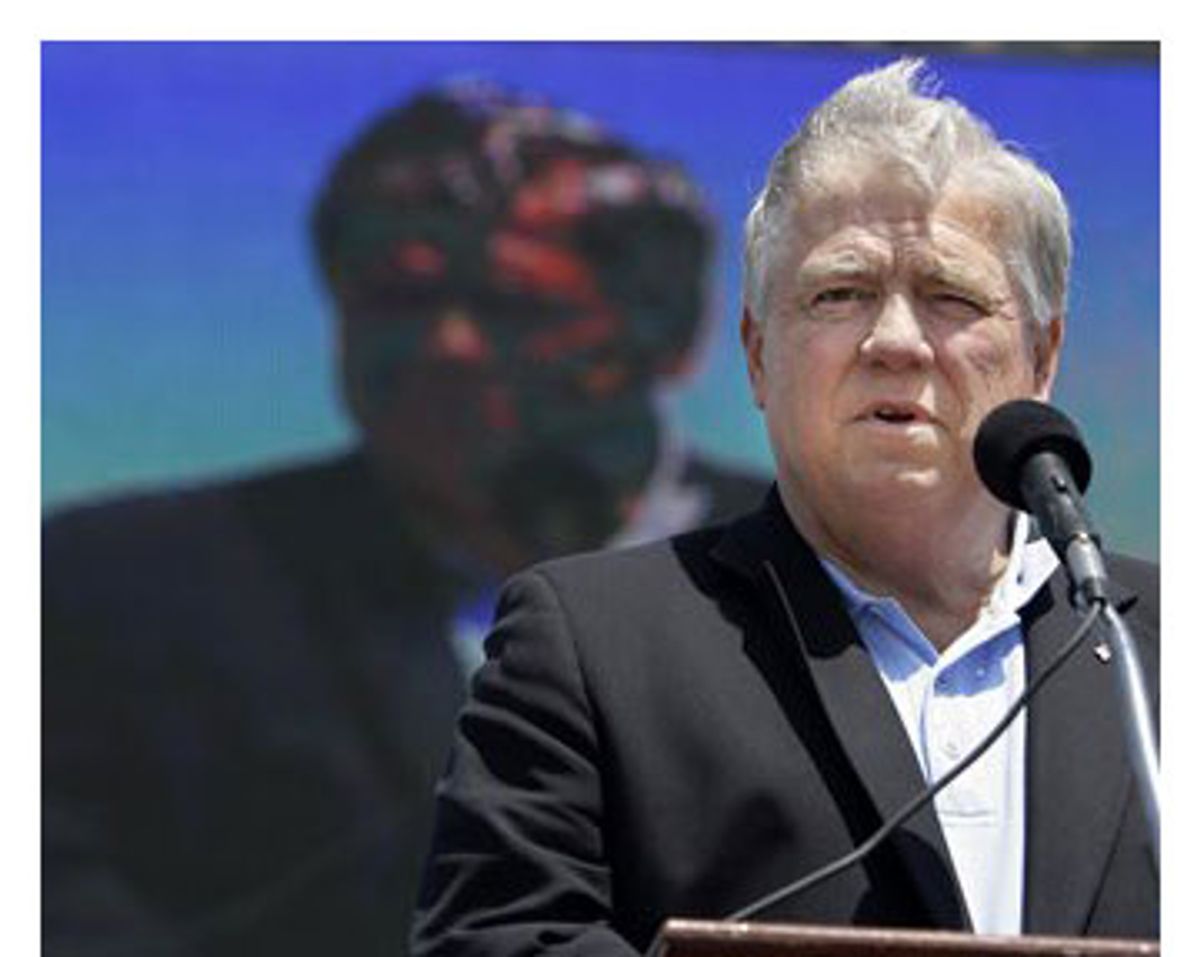 As president of the supervisory board in Hancock County, Miss., Roderick "Rocky" Pullman faces more problems than he sometimes cares to think about. In August 2005, his coastal county became "ground zero" for Hurricane Katrina, when the eye of the most destructive storm in the nation's history made landfall just south of Pearlington, the small town on the Louisiana border 40 minutes from New Orleans that he calls home.

Katrina's 170-mph winds and 35-foot waves literally reduced Pearlington to rubble. Every last vehicle and building in town was destroyed. In Hancock County as a whole, 50 residents were killed, and half the businesses and homes were wiped out. When relief teams arrived 10 days later, they found 600 people living under tents and tarps, linked to the outside world only by ham radio.

Today, Hancock County and the rest of coastal Mississippi are 21 months into a recovery that has garnered Gov. Haley Barbour lavish praise. Governing magazine named Barbour its 2006 Public Official of the Year largely due to his supposed post-Katrina leadership and savvy, including his skill in convincing federal lawmakers to channel billions of relief dollars to the Magnolia State. As Billy Hewes III, a Republican official from Gulfport, said: "He is to Katrina what Rudy Giuliani was to 9/11." Outsiders might be surprised to learn then, that despite the plaudits, and despite the fact that Barbour's GOP connections seem to have won him a disproportionate share of relief money from Washington, post-Katrina recovery in some of the hardest-hit areas of the Mississippi coast is moving as fast as molasses in winter.

In Hancock County, Rocky Pullman paints a bleak picture. The recovery is proceeding so slowly that, almost two years after the storm, most of his neighbors still can't get mail. Before Katrina, the majority of Pearlington residents used post-office boxes; but since no post offices -- or any other major city, county or school buildings in Hancock County -- have been rebuilt, they have to drive an hour round-trip to Bay St. Louis to pick up a letter.

"We've been asking for three post offices to be erected in Hancock County for well over a year now and have got no response whatsoever," Pullman says. "Those are the kind of things that really bother you. It's hard to get people to feel good when they have to spend the amount of money they do with the price of gasoline just to get their mail."

Barbour, the former chairman of the Republican National Committee with close ties to the Bush administration, has definitely proved more successful than his maligned Louisiana counterpart, Democratic Gov. Kathleen Blanco, in one respect: lobbying Washington for cash. In fact, Barbour's ability to steer a lopsided share of Katrina money to Mississippi has touched off a firestorm of outrage in Louisiana, which suffered considerably more destruction from the storm.

Consider the Gulf Coast housing crisis, one of the key issues that has kept nearly half the population of New Orleans from returning to the city since Katrina. More than 75 percent of the housing damage from the storm was in Louisiana, but Mississippi has received 70 percent of the funds through FEMA's Alternative Housing Pilot Program. Of the $388 million available, FEMA gave a Mississippi program offering upgraded trailers more than $275 million. Meanwhile, the agency awarded Louisiana's "Katrina Cottage" program, which features more permanent modular homes for storm victims, a mere $75 million.

It's not just housing. Mississippi is also slated to get 38 percent of federal hospital recovery funds, even though it lost just 79 beds compared to 2,600 lost in southern Louisiana, which will get 45 percent of the funds. Mississippi and Louisiana both received $95 million to offset losses in higher education, even though Louisiana was home to 75 percent of displaced students. The states also received $100 million each for K-12 students affected by the storms, despite the fact that 69 percent resided in Louisiana.

The disparity between the states' needs and the funding they received from Washington has been so glaring that even disgraced former FEMA director Michael Brown recently charged that politics played a role. "Unbeknownst to me, certain people in the White House were thinking we had to federalize Louisiana because she's a white, female Democratic governor and we have a chance to rub her nose in it," Brown told students at Metropolitan College of New York in January.

The White House denies any favoritism. But as Sen. Mary Landrieu, D-La., has pointed out, much of the power in allocating Katrina recovery funds before this year fell to a Republican-controlled Congress -- and, more specifically, to a Senate committee chaired by Sen. Thad Cochran, who just happens to be a Mississippi Republican.

"Sen. Cochran certainly felt very fortunate to be in the position he was in when the hurricane hit because he was able to make sure both Mississippi and Louisiana got the help they needed," press spokeswoman Margaret McPhillips told Salon.

As for Gov. Haley Barbour, his office declined to comment on the funding disparity for this story. But when the issue came to a head this spring, Barbour downplayed the role of his political connections, instead insisting that his state was putting federal money to better use; as he told the Associated Press, "Congress is getting their money's worth in Mississippi."

For the residents of Hancock County, Barbour and Mississippi's ability to capture the lion's share of Katrina relief dollars makes the slow progress in their area all the more demoralizing. The county's 911 system still operates out of a trailer. Damaged wastewater and drainage systems frustrate hopes of a return to normalcy; earlier this month in Waveland, 16 miles east of Pearlington, a 9-and-a-half-foot alligator was found swimming in a drainage ditch next to a bus stop at 8 o'clock in the morning. Mayor Tommy Longo says the creatures freely roam throughout devastated residential areas.

Indeed, Hancock County was one of three Gulf Coast areas recently singled out as having "severe problems" by the Rockefeller Institute on Government and the Louisiana Public Affairs Council, with the towns of Waveland and Bay St. Louis flat-out "struggling to survive."

Most important, Hancock leaders say, Mississippi leaders and their federal allies have failed to use their clout to tackle some of the most obvious barriers to rebuilding.

For example, the Robert T. Stafford Act, a federal law governing recovery efforts, requires affected communities to pay a 25 percent match upfront before they can receive federal disaster funds. After Katrina, the White House reduced the match requirement to 10 percent -- a still-hefty sum for devastated areas. Rocky Pullman estimates Hancock County will need to come up with up to $8 million to get federal funds for basic services. "I don't know where they expect us to get that money from," Pullman says.

President Bush waived the match requirements entirely for New York following the 9/11 attacks, but he has said he opposes any further waiver for Katrina funds. The Iraq/Katrina supplemental appropriations bill passed by Congress last month would have completely waived the match, but the president vetoed it. The new House bill approved last week also waives the match, but the president has not signaled his willingness to compromise on the issue.

"If ever they've waived that match requirement, they should do it now," says Pullman. "If they don't do it for Katrina, then shame on them, because that's almost as bad as the storm hitting us again."

Parts of Mississippi are doing much better than Hancock County. The Rockefeller Institute report found that recovery "is well underway" in Biloxi, Gulfport and Pascagoula, and that there's actually been a post-Katrina economic boom in Jackson, Hattiesburg and Laurel.

And thanks to the economic boost in certain areas, Mississippi is now looking at a windfall in tax revenues. For the first six months of the 2007 budget year, general fund revenues were up 12.7 percent, and the Mississippi Legislative Budget Committee and the governor recently increased the estimate for the 2007 budget from $4.5 billion to nearly $4.7 billion, which means the state has an extra $192.7 million thanks to higher-than-expected tax collections largely from Katrina spending.

But under Barbour's leadership, the state has been unwilling to use its good fortune to help debt-ridden towns -- and some are at risk of going under.

In Hancock County, towns racked up massive debt when federal officials promised to make disaster loans but failed to move quickly enough. The Mississippi Development Bank stepped in and loaned $5.3 million to Hancock County and $4.5 million to the town of Waveland to keep basic operations running. State officials hoped FEMA would reimburse some of the money, but that hasn't materialized.

Now those loans -- about $79 million across the Mississippi coast -- come due in October, and small towns hardest hit by Katrina have no idea how they'll meet the obligation. "We literally had no choice" but to take out those loans, says Waveland's Mayor Longo. "And in the ground zero area of Hancock County and Waveland, we're not in really much better shape economically than we were then. We're certainly not in any shape to pay back those loans right now."

Mayor Longo thinks at least part of Mississippi's post-Katrina tax windfall could go to help his and other storm-crippled communities deal with their debt, but Gov. Barbour has rebuffed the idea. And that has Longo and other local officials in Hancock contemplating the heretofore unimaginable.

"One thing you continually hear from officials from FEMA to the state level is that -- and they love this phrase -- they've 'never seen a city go under because of a natural disaster,'" Longo says. "But there have been so many firsts in Katrina."

Chris Kromm and Sue Sturgis are editors of Gulf Coast Reconstruction Watch, a project of the Institute for Southern Studies in Durham, N.C.