"Pirates of the Caribbean: At World's End"

Johnny Depp, Keira Knightley and crew sail back into theaters. Send in the hook! 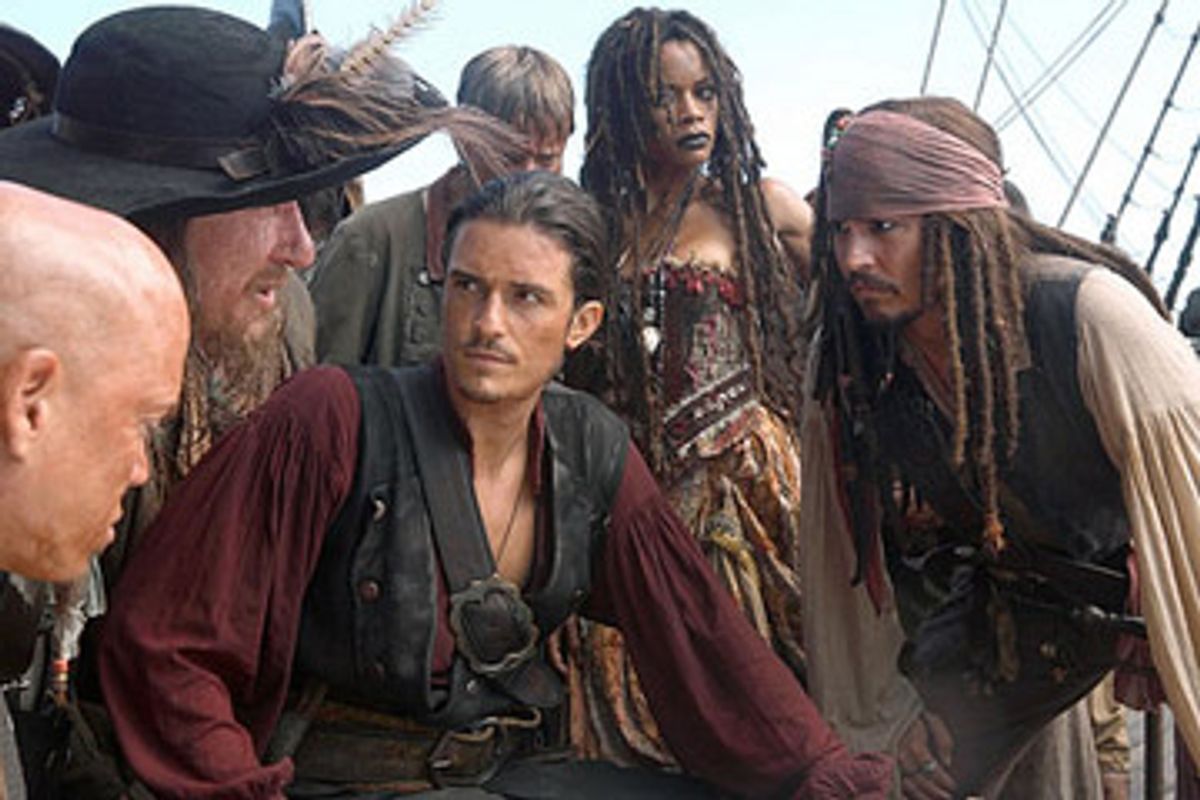 The third and (please God) final entry in this screamingly successful Disney franchise is, like its predecessors, big on spectacle: There's so much to look at that you never know where to look. Director Gore Verbinksi and writers Ted Elliott and Terry Rossio have shoehorned so much action, movement and manufactured dazzle into the picture -- all cued by Hans Zimmer's hyperventilating music -- that the thing never simply breathes. This is a glazed, inhuman, cluttered piece of work, a storytelling mishmash that buries the considerable charms of its actors under heavy drifts of silt. It will make heaps of doubloons, but at this point, the "Pirates" franchise is essentially collecting a tax from moviegoers: See it and like it, matey, or you'll be out of step with the whole universe! And who wants that?

But until Walt Disney Pictures actually merges with the IRS -- not out of the question, but let's not think about that now -- no one is required to like "Pirates of the Caribbean: At World's End." I only wish I liked it more. Movies can be imperfect and still be deeply enjoyable: The first "Pirates" picture, "The Curse of the Black Pearl," may have been crazed, cracked and convoluted, but it had so much energy and spirit -- in addition to some wondrous, ghostly special effects -- that its flaws receded. No one expected much from a movie based on an amusement-park ride, but "The Curse of the Black Pearl" showed some surprising wit and style, particularly Johnny Depp's flippant, offhanded turn as the charming, fashion-victim pirate Jack Sparrow.

The follow-up, "Dead Man's Chest," took everything that was casual and fun about the first picture and made it seem like hard work. The story line of the first picture was no model of clarity, but the second one was simply a stormy mess. Keira Knightley's Elizabeth Swann had little to do but act like a wimpy damsel in distress; Orlando Bloom, as her sometime beau Will Turner, seemed to have lost some personality (if that's even possible) between pictures. And while Depp was still fun to watch, his character now seemed a little more studied, his affectations more pronounced and exaggerated -- the performance no longer felt like a dirty little ditty he made up as he went along.

And now, with "At World's End," the series at last grinds, punishingly, to a halt. The picture opens with a chilling and reasonably effective scene: We see hundreds of scruffy, unfortunate citizens being hanged, presumably without trial, simply because they're thought to have been consorting with pirates. Tom Hollander's poncey Lord Cutler Beckett is behind the crackdown; now he has also got ahold of Davy Jones (Bill Nighy, again behind a beard of prosthetic tentacles) and has taken control of the cursed captain's ghost ship, the Flying Dutchman, which he's using to attack pirate ships hither and yon. Meanwhile, Jack Sparrow is trapped in Davy Jones' Locker, a weird wasteland with no water in sight. Will, Elizabeth and Captain Barbarossa (Geoffrey Rush) hope to rescue him because they need to gather the Nine Lords of the Brethren Court -- a kind of pirates' board of directors -- in order to stop Beckett. Somewhere in there, Chow Yun-Fat shows up as fearsome Chinese pirate captain Sao Feng, who's bad (it's clear he intends to rape the captive Elizabeth, though the deed is aborted) until suddenly, for no good reason, he becomes an OK guy (because, well, why not?).

Naomie Harris returns as witch-woman Tia Dalma, although, we now learn, she's much more than just a witch-woman. But nothing comes as a surprise in "At World's End": In this movie, anything can happen, and so just about everything does. Alliances that were never very clear to begin with shift and regroup so often that they cease to matter; it's hard to remember who's living and who's dead, who's waiting for a curse to be lifted and who's attempting to do the lifting. There are so many allegedly rousing sea battles that they all start to run together: You never know where one ship is in relation to another, or who's on what vessel and what the heck they're attempting to accomplish there. There are plenty of sword fights and acrobatic battle sequences, but the action is a messy jumble. There's so much random sword jabbing and firing of guns that, collectively, the battles end up being of almost no consequence -- everyone is so busy fighting all the time that it's impossible to keep track of what they're fighting for. The picture (like the earlier ones, it was shot by Dariusz Wolski) has a rich, burnished look, but the damn thing is so exhaustively action-packed that it's hard to take much of it in.

There are a few bright spots: Knightley's Elizabeth gets to do some snazzy fighting, and spends much of the picture in fetching, richly embroidered Chinese robes. But the characters here rarely interact: Mostly they just bounce off one another, like random kinetic molecules. And no longer is Depp allowed to simply play Jack Sparrow; now we need novelty effects. At one point, we see dozens of Jack Sparrow clones battling for supremacy in the pirate's addled brain. The effect gives Depp plenty of opportunities to mince and mug and shake his beaded dreads, but it all adds up to less rather than more. Even Keith Richards' brief appearance, as Sparrow père, is disappointing: He looks OK, in a crinkly, heavy-eye-makeup sort of way, but he has virtually nothing to do. He's treated as a novelty, a rock 'n' roll monkey in a gilded cage, and his scenes begin to drift out of memory even before he's off-screen.

Like its predecessors, "At World's End" sure looks like it cost a bundle -- it works overtime to prove to us that it's quality entertainment, even though it's really just grueling and tedious. There's no reason we shouldn't expect more, even from movies that are designed to be pure summer fun. Disney will earn back every single piece of eight it spent on "At World's End," multiplied exponentially. But maybe moviegoers need to be more like swashbuckling privateers, out for our own pleasure and gain instead of that of the big studios. What if Disney made a "Pirates" movie and nobody came? What if we moviegoers just said, en masse, Talk to the hook, because this peg leg is taking its moviegoing booty elsewhere? That's not going to happen with "At World's End." But at least we've reached the bottom of this rancid bottle of rum; there'll be time to sleep it off, and dream of better movies tomorrow.