Hugh Laurie is the thinking woman's celebrity crush. But will my Google habit feed this obsession or kill it? 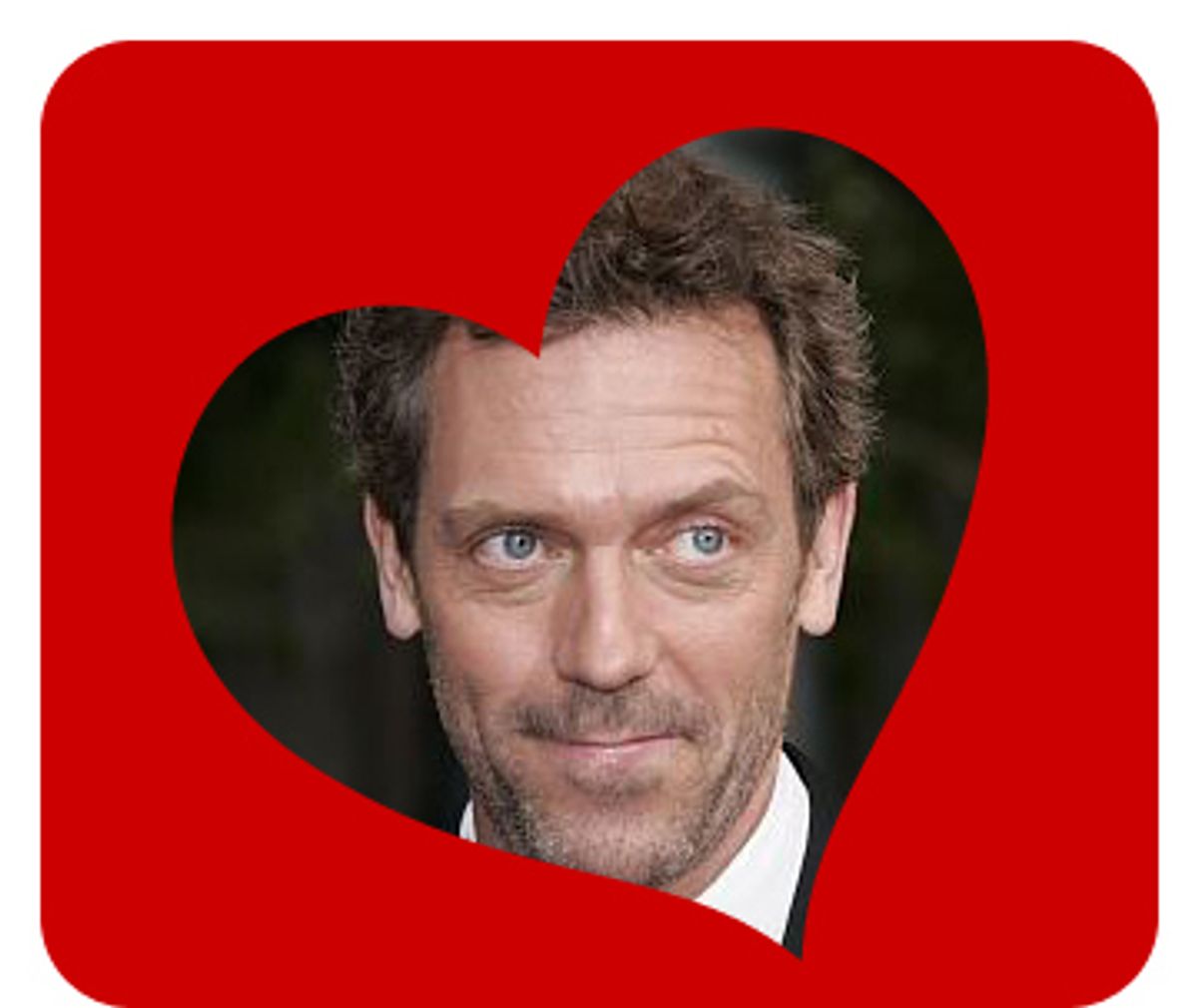 When I crave a little fantasy, I dream about a 6-foot-2 fuzz-face with a posh English accent and a penchant for New Orleans blues and the Triumph Bonneville. Who's this, you say? Why, none other than the latest inductee into the Order of the British Empire, actor Hugh Laurie, aka Dr. Gregory House, lead curmudgeon on Fox's medical drama "House," which closes out its third season Tuesday night.

I know I'm not the only one. In fact, I think it's safe to say that Laurie has become the zeitgeist obsession for the smarty-pants set -- partly because of the obvious lures (talent, wealth, looks) and partly because unlike, say, Clooney or Farrell, he's a good lust objet for those of us who fancy ourselves "above" such fixations. He has that refined air, that admitted tendency toward melancholia. He's soulful, clever, quirky yet out of reach. Add a touch of sexual ambiguity for good measure, and every alterna-doofus wants to be Laurie's own personal love pony. (Or have him be theirs. Objectification -- it's a big tent!) Laurie is the grown-up version of your teenage Morrissey crush, perfect for those of us who sexually imprinted on this type of hunky British gloomster in adolescence.

To many people, Hugh is House, and House is Hugh, though those who know Laurie point out that he's quite different from the character he plays. Constantly described as "brilliant but flawed," House speaks to the part of us that wants to believe that we are so amazing, people will withstand our dread obnoxiousness to bask in our brainy, radiant glow. And his tossed-off zingers reinforce the notion that it's cool to be a dick -- as long as you're a quotable dick. Plus, it'd be awesome to pull down a solid six figures showing up for work in assed-up jeans and a Joy Division T-shirt, as House does. And there's a vicarious thrill (and some hope) in seeing someone limping into their late 40s, drug addled and cranky yet still able to make young hotties go gaga.

Hit a fan-fiction site and you'll find tons of fans tapping out scenes between Dr. House and every other major character on the show: pretty princess/doctor Allison Cameron, tough-as-nails hospital administrator Lisa Cuddy and, most heatedly, Dr. James Wilson, played perfectly by sweet-faced Broadway emeritus Robert Sean Leonard. I'd be happy to see a little polymorphous perversity on a hospital drama, but personally, I think Wilson's altar-boy countenance and boundless compassion would quickly have House bored out of his mind and taking his cane to Wilson's knee in a fit of misplaced frustration. But hey, we're in Crushville here -- chacun à son 'ship.

I'm on Team Cuddy because she clicks through the halls of the fictional Princeton-Plainsboro Hospital in low-cut sweaters and pencil skirts, bringing incredible Jewy glamour to prime time. The show's creators are smart enough to keep House's romantic fate a mystery by pitching different prospects at him, including a nutritionist played by the delectable Piper Perabo, who just so happens to be my other celebrity lovebug; therefore, I must insist to the writing team that House keep his lecherous paws off the coltish miss. Seriously. Go dream up some lonely Princeton student-cum-dominatrix with eczema or acid reflux and let House follow her around.

My Laurie fixation started when I caught him on "The Late Late Show With Craig Ferguson" and realized he wasn't American, despite the 100 percent convincing accent on "House." Impressive! This prompted me to start poking around online, and between what I found on Google and YouTube, I was soon stacking up layers of infatuation the way a master baker diligently assembles a tiered cake: The comedic firmament; the befuddled looks and killer thighs; the decades-long friendship with Stephen Fry, who is a comic God unto me. I pieced together randomly mined bits of Laurie goodness, then there we were at the top of the luv cake: Me and Hugh. Hugh and Me. Grinning, waving.

Mostly what appeals is his hilarious self-deprecation. Despite the fact that his former Cambridge classmate and girlfriend, Emma Thompson, once described Laurie as "one of those rare people who manages to be lugubriously sexy, like a well-hung eel," he doesn't agree. He told Britain's Now magazine: "I recently did a shower scene and it was one of the most traumatic events of my life. It struck me as a misuse of resources because the producers have gone to the trouble of hiring young, beautiful people with smooth skin and high bottoms and they go and pick the old guy with buns of yogurt." I like this. If you're going to self-lacerate, at least be kind of fun about it.

I'm in favor of any form of distraction that doesn't result in liver damage, a broken marriage, consumer debt or excessive weight gain, so I heartily enjoy the rush of that exquisitely modern guiltless pleasure known as the Google stalk. Through the magic of the Web, I've learned this about Laurie: He's a Gemini! With many planets in Leo! His late father was a doctor, and he thinks New Age medicine is stupid! He picked Ian Dury's "Hit Me With Your Rhythm Stick" as one of his desert-island discs in the 1990s! At this point, I could take a medal in Laurie trivia. Speaking of medals ... did you know that Laurie's father won a gold medal in rowing in the 1948 London Olympics and Laurie himself rowed at Cambridge?

It's not all cyber hunt-and-peck, though, this fascination. I have a fantasy relationship with him as well. We have cute nicknames for each other, like Sexy Trousers and Kinky Boots. On rainy nights, I sit by the piano while he's at the keys, busting out the Brit-rock equivalent of blue-eyed soul, long fingers teasing out tortured ballads. David Bowie's "Life on Mars" followed by a Paul Weller sampler: "The Bitterest Pill," "Long Hot Summer," the original version of "The Paris Match," with perfect elocution on the French bits. When we're apart, the mailman delivers a steady supply of brown-papered parcels. One week, it's two dozen Cadbury Dairy Milk bars, the next week, Leadbelly on vinyl. Then two airline tickets to Bali, where we douse ourselves in 400 SPF sunscreen and hide our pasty asses in the shade. (His wife is given special dispensation to do whatever she wants during our idyll, while my husband is promised a "Don't ask, don't tell" getaway with Lisa from QVC.)

I'm not blind to the fact that this passion can't possibly translate to real life. Even if we were both single (and we are both so not), we'd be doomed. Two self-loathing, guilt-laden Presbyterians in one relationship is the worst possible redundancy -- we'd implode in a black hole of repression and "No, no, after you" politesse before we even started. Just meeting him would be a disaster. I'm sure I'd say something fannish and stupid, like, "I think virtually every pop song can be improved by the addition of a Hammond organ, don't you?" While infatuation taps into our escapist needs, it also brings out our inner 14-year-old, and that's never a socially graceful creature, is it?

Some might say, what's the point of fancying someone if there's no move to follow through? But not following through is precisely the point. Stasis is the very essence of the crush; it's not supposed to go anywhere. Must we be so damn American in our affections? I'm already too goal-oriented as it is -- relentlessly doing stuff, acquiring things, making changes. When it comes to crushing, I'm content to just let it be. To allow my fondness for my fantasy Hugh to remain purely indulgent.

In fact, I may have to do even less than I'm doing now, if I want my fantasy to survive. If I continue to Google up and consume every bit of news and trivia, I may have to face the fact that His Hughness is not as perfect in reality as he is in my imagination and my Web browser. So I've resolved to stop the stalking. Instead, I will get no closer than late-night reruns on the USA Network. Because some things should remain sacred. Celebrity crushes may twist and wither under reality's harsh light, but they can always be sustained by the sanctifying loop of syndication.