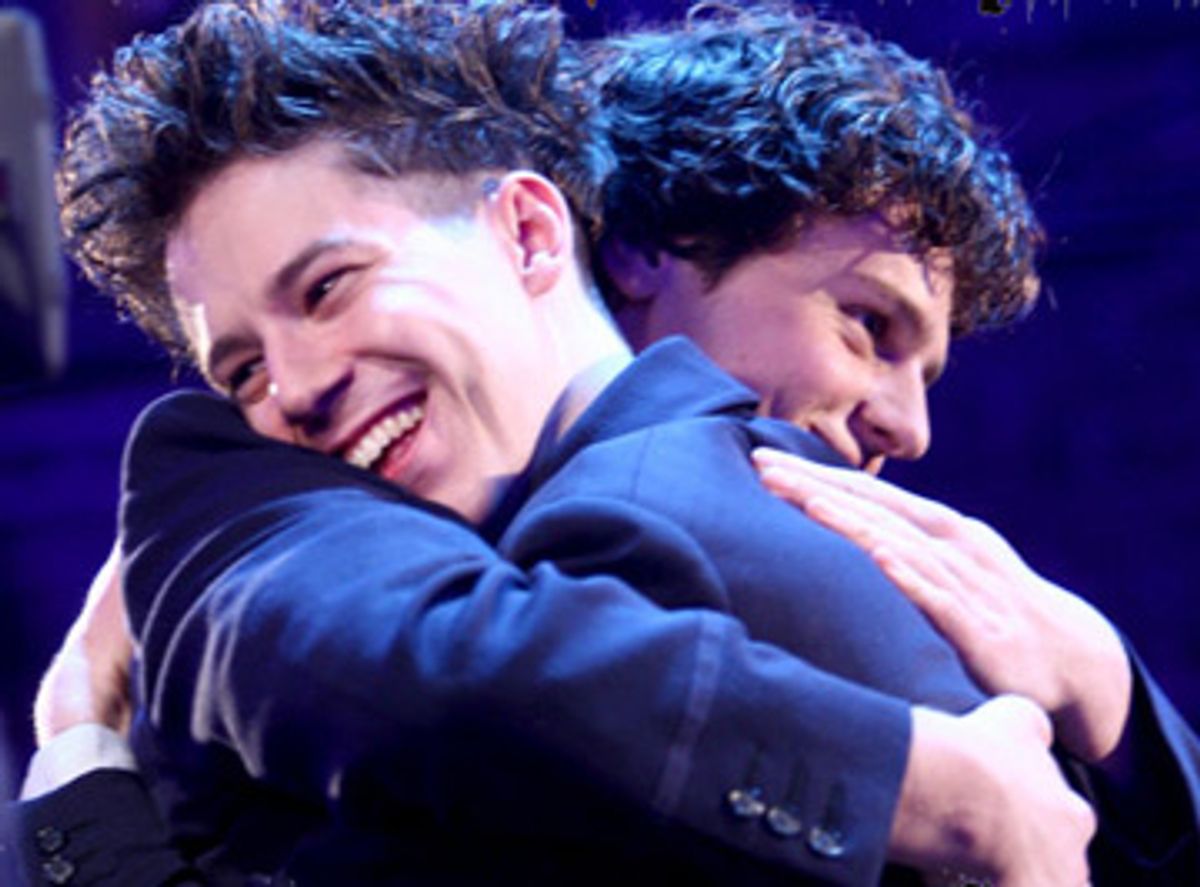 Six years ago, Mel Brooks hit New York with his smash hit phenomenon "The Producers" and inadvertently ushered in a new era of musical theater, one in which the old-style musical comedy -- the kind with a book, lotsa yuks, pretty girls and grandstanding performances -- was rushed back into fashion. For nearly three decades, that sort of feel-good enterprise had been locked in the deep freeze, first by the lumbering domination of the British mega-musicals, then by the heady, medicinal exercises of the atonal Sondheimarati. Brooks reminded theatergoers what they had been missing: fun.

But that era -- which resulted in the long runs of such self-mocking and satisfying shows as "Hairspray," "Dirty Rotten Scoundrels" and "Spamalot" -- may now be over. When Brooks' new stage show, "Young Frankenstein," makes its expected bow on Broadway this fall, it might be too late to enjoy the era its author created, the atmosphere in which a show like "Frankenstein" would blossom. The reason? Two shows: "Grey Gardens" and "Spring Awakening."

These two daring, surreally unusual musicals -- both transfers from the 2005-06 Off-Broadway season -- have dominated Broadway during the past six months. Together, they will likely walk away with many of the Tony Awards in the major musical categories. Just as quickly as "The Producers" made "Les Misérables" and "Phantom of the Opera" look like musty warhorses, "Grey Gardens" and "Spring Awakening" -- and, to a (much) lesser extent, "LoveMusik" -- have recast "The Producers" and its stylistic brethren as so much low-brow cavorting. In Times Square, audacious visions are the new black, and "Young Frankenstein" may very well be faulted by critics for wanting in the smarts department.

Critical winds have already shifted a bit. Two cases in point: "Curtains," a hybrid backstage drama and murder mystery, and the first new John Kander and Fred Ebb musical to be staged on Broadway since Ebb's death; and "Legally Blonde," a once-promising stage adaptation of the popular Reese Witherspoon film comedy about a savvy SoCal ditz who takes on Harvard Law. Both shows couldn't have made it clearer that a good time at the theater was the lead item on their artistic agenda. No life lessons here. No furthering of the art form. And had these shows premiered in New York in, say, 2005, their success might have been assured. In the post-"Grey Gardens"-and-"Spring Awakening" world, however, "Curtains" was dismissed by many reviewers as old-fashioned and corny. "Legally Blonde," meanwhile, was deemed bubble-headed, a feast of empty calories.

That two shows as singularly odd as "Grey Gardens" and "Spring Awakening" should have climbed the Everest of critical and popular opinion amounts to one of the most unlikely success stories in the theater since a sassy puppet musical called "Avenue Q" whomped the witchy butt of tween magnet "Wicked" at the Tony Awards. Each is drawn from source material that any fool would see as ludicrously inappropriate for a musical. "Grey Gardens" takes its inspiration from the 1975 Maysles brothers film of the same name, which documented, with a hungry and cruelly unblinking eye, the squalid-cum-triumphant lives of Edith Bouvier Beale and her middle-aged daughter, "Little Edie." An aunt and a cousin of Jackie Kennedy and one-time society queens, they had mysteriously descended into tragicomic agoraphobia, living out their eccentric, deluded, codependent lives with a few dozen cats and raccoons in a dilapidated East Hampton manse. The film developed a cult status over the years, particularly among gay men, who see the Beales as staunch iconoclasts and different-drummer romantics.

"Grey Gardens" was written by the previously unknown composing duo of Scott Frankel and Michael Korie. Its book is by "I Am My Own Wife" and "Quills" scribe Doug Wright, America's playwright laureate of sacred monsters. The musical is divided into two distinct acts. The second act faithfully reproduces the film's various eccentric episodes -- the fights, Little Edie's nonstop monologuing and impromptu dance recitals. The first act, set three decades earlier when the family was in clover, tries to imagine how the once wealthy and well-positioned Beales got from A to B. It plays like a double feature of "The Philadelphia Story" and "What Ever Happened to Baby Jane?" Critics complained that it didn't all work, but few said it wasn't spellbinding.

The story follows a group of boys and a parallel group of girls tormented by their libidos and ignorance. They are kept miserably in the dark by their teachers and parents until their lives careen horribly off the track. When it finally bowed at the Atlantic Theater Company Off-Broadway, critics were shocked how well the fin de siècle story of a sexually repressive society fit with Sheik's punkish score. Sheik's rock music and Sater's poetical colloquial lyrics played like a concert by one of those garage bands fed by the muse of adolescent angst. And the show's bracketing of Victorian-era Germany and fundamentalist, Bush-era America was one of the cleverest theatrical tricks in memory.

The double triumph of these shows is more considerable still when one considers the uncompromising artistry of each production's staging. Michael Mayer is the director of "Spring Awakening," Michael Greif of "Grey Gardens"; each man is a known quantity in the New York theater, with both hits and misses to his credit. But something in the material seems to have brought out the fight in them. Mayer's wizardry is the more striking. Onstage seating surrounds a spare world of wooden chairs and bare light bulbs. Youths dressed in short pants pull cordless mikes out of their wool jackets, wailing to an unhearing world about "My Junk" and "The Bitch of Living." They twitch and sweat through Bill T. Jones' semaphore-like choreography -- the most distinctive and individualized movements a musical has owned since the days of Robbins and Fosse. When, in a late number, the cast leaps about the stage chanting "Blah, blah, blah," they're unleashing a rage at the daily yoke of life we all wish to express.

Greif's main accomplishment is probably the performance he drew out of Christine Ebersole, the star of "Grey Gardens." Ebersole offers two eerily complete variations on frustrated independence, playing "Big Edie" in Act 1 and "Little Edie" in Act 2, and she is the artistic soul of the show, the creative team notwithstanding. She does not say "Blah, blah, blah" at any time, but instead "Da da da da dum." The phrase comes three times in "The Revolutionary Costume for Today," a song at the top of Act 2 that in many ways is the show in microcosm: determinedly eccentric, loving of its protagonist and on message -- that message being, to put it crudely, don't let the bastards get you down.

Greif stages the more conventional first act, in which Little Edie's engagement party to Joe Kennedy Jr. is brought to grief, as a sort of 1930s musical comedy manqué. In contrast to its frothy frivolity, the second act is dark-hued cinéma vérité. The inescapable Grey Gardens mansion is seen from various angles, folding in on its inhabitants from all sides. At the end of each act, Ebersole peers out the window as if bitterly understanding she is incapable of leaving. Grey Gardens is a haunted house in a horror film where the boogeyman is life.

Leaving either of these shows, one feels exhilarated, disoriented, enchanted and confused. You don't skip down the street the way critics seem to think one must after attending a first-rate musical comedy. You walk unsteadily, as if still inhabiting the shows' dream worlds.

Why, one might ask, are these shows even on Broadway, which is regularly condemned as a mausoleum of faded and corrupted art? What is a show like "LoveMusik," a high-minded, heavy-browed jukebox music about the curiously joined lives of Kurt Weill and Lotte Lenya, doing at Manhattan Theater Club's Biltmore Theater rather than some black box in the East 30s? It's a good question and one easily answered. For a few years now, the Off-Broadway commercial theater has been a wretched, suffering wreck. Rising production costs and low ticket prices, relative to Broadway, have made it nigh impossible for producers to make a profit in these smaller houses, no matter how popular the show. Off-Broadway is no longer a good long-term option; if the risk of transferring a hot show for an open run is to be taken, let it be taken where there's a chance for financial success.

"Grey Gardens" and "Spring Awakening" went to Broadway after their initial runs at Playwrights Horizons and the Atlantic Theater, respectively, because there was nowhere else to go. And they're not alone. "In the Heights," the Off-Broadway hip-hop and salsa musical about life in Washington Heights, and "13," Jason Robert Brown's show about the lives of teenagers, performed by teenagers, which premiered last December at the Mark Taper Forum in Los Angeles, have announced plans to transfer to Broadway. A decade ago, they never would have entertained such a move.

This is good news for theater; tough, interesting shows are being given the splashiest showcases in town. It's a challenge, however, to musicals that don't shoot for the moon. Both "Grey Gardens" and "Spring Awakening" have their flaws. Sater's lyrics are often slapdash, and there is an interchangeable quality to many of the score's songs. "Grey Gardens" can come off as one big pet project: the first act written as an excuse to do the second act; the second act only done to pay tribute to the film. But the audacity of each creation is enough to win you over. Many theater critics regard themselves as charged with safeguarding the health and reputation of the musical theater. They will always gravitate more toward the show that is trying something new than to something safe and familiar. They also hate to be caught simply enjoying themselves. (Witness their spurning of "Coram Boy," which was nothing more than a hugely entertaining, hyper-theatrical melodrama. Ick!) Better to champion a show that edifies and illuminates.

So Mel Brooks had better watch out. We've had our five-year binge of fun. Now, critics -- and perhaps audiences as well -- want nourishment. A slickly staged laugh-fest with a tap-dancing monster and plenty of jokes about knockers may not do the trick anymore.

Robert Simonson writes about theater for the New York Times, the New York Sun, Time Out New York and Playbill.com, where he is senior correspondent.