Christine Ebersole feels a deep spiritual connection to the women she portrays in Broadway's "Grey Gardens." Will the Tony gods smile on her? 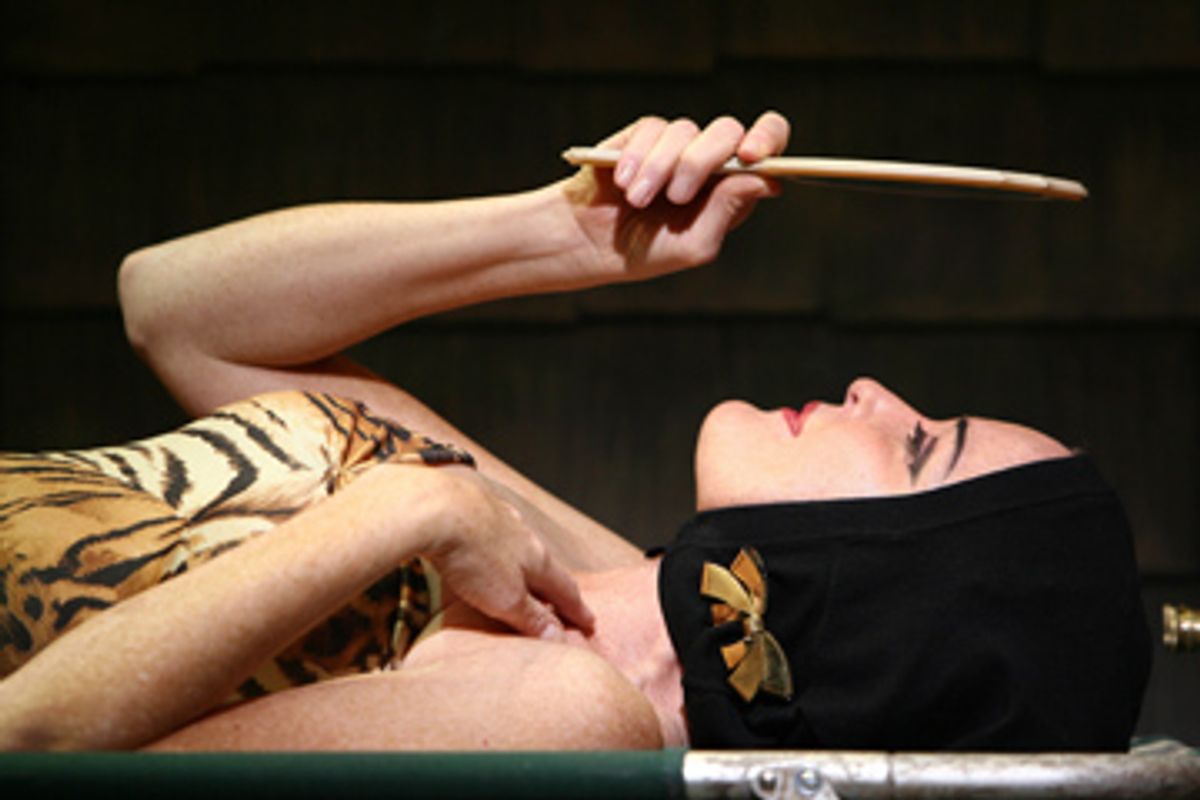 Usually, when an actress is preparing a role, she avoids seeing previous performances of the part. But Christine Ebersole, widely considered a shoo-in for the best actress Tony for her performance in the musical "Grey Gardens," which opened on Broadway in November after a sold-out run at New York's Playwrights Horizons, says she watched the 1975 Maysles brothers film on which it was based "breakfast, lunch and dinner." And that was before she had any idea the movie was going to be made into a stage show.

The cinéma-vérité documentary by Albert and David Maysles that exposed the deeply dysfunctional relationship between Edith Beale (Big Edie) and her daughter, Edith Bouvier Beale (Little Edie), and the unsanitary condition of their East Hamptons manse (fleas, mold, 52 cats), inspires perversely intense devotion among its fans. For many, the first sight of the formerly glamorous cousin and aunt of Jackie Kennedy eating out of cans, bickering and vamping is akin to a religious experience.

Spoken-word artist Juliana Luecking remembers seeing the film in 2002 and being so astonished she couldn't move, and so she sat through it again. "The thing with 'Grey Gardens,'" Luecking says, "is that it shows Edie and her mother finding some joy in their madness. I never knew about the utter beauty in that."

As a documentary, and one involving filth and psychodrama, "Grey Gardens" didn't seem like the most natural inspiration for a Broadway musical. It hardly had the pink, glittery mass potential of, say, "Legally Blonde." Who, except fans of the film, would want to go see a show about two crazy old women living with a million cats? And wouldn't those notoriously proprietary fans find fault with any new interpretation of their beloved movie?

The musical's creative team -- composer Scott Frankel, book writer Doug Wright and lyricist Michael Korie -- were so devoted to the film and afraid of alienating its fans that they agonized over how to approach the stage project. "I was afraid of doing [the movie] a disservice, so I said no for two years," Wright says. "Scott convinced me." "I take them seriously," says Frankel of the Edies. "It's a very human tale: Beauty, money and privilege can't insulate or isolate you from the vicissitudes of life."

The show's success reflects the collaborators' many smart choices: The addition of a prologue showing the Edies in their heady socialite days, for instance, raises the stakes by highlighting just how far they had fallen by the '70s -- and dazzles Broadway audiences with glitzy costumes and grandeur before trotting out the sagging stockings and decay. But perhaps the greatest stroke of brilliance was Frankel's decision to cast Christine Ebersole, age 54, in a tour de force dual role (she plays Big Edie in Act I and Little Edie in Act II, opposite the formidable Mary Louise Wilson). "I'd seen her in everything -- dramas, musicals, TV, concerts," Frankel says, "and always admired her as a musician, singer and comedienne. But I got the feeling you were only seeing a tenth of what she could do. She has so many talents -- she can go light and dark, and it liberated us so much as far as what we could do."

"She really is a keen observer of human behavior," says Wright of Ebersole. "She can mimic with uncanny accuracy the accents and behaviors of other times. She has a chameleon-like quality. She can watch a flickering black-and-white movie on TV and then re-create it in front of her evening mirror." And having watched Little Edie preen her way across the screen countless times, Ebersole had no trouble doing justice to the eccentric former socialite and her peculiar sartorial style (upside-down skirts, turbans -- all celebrated in the song "The Revolutionary Costume for Today").

Ebersole's performance in Act I is charming and pitch-perfect, but what she does in the second act is genius. From the moment she comes out in full Little Edie regalia and coos to the audience in that singular accent: "Oh hiiiiiiii," she becomes at once terrifying and adorable, an object of pity and of worship. This duality is exquisitely embodied in the gorgeous song "Around the World," in which Little Edie veers from ferocious anger over feeling trapped in her mother's house to childlike delight in her wall of special mementos. Ebersole kills with this schizophrenic solo. The key to her success, according to Frankel: "She has a beautiful voice, and she's not afraid to use it in an ugly way."

The critics agree. "Watching [Ebersole's] performance is the best argument I can think of for the survival of the American musical," wrote New York Times chief drama critic Ben Brantley. In its 2006 Off-Broadway run at Playwrights Horizons, Ebersole won the Outer Critics Circle Award and the Obie and Drama Desk Award, and she was given a special citation from the New York Drama Critics and the Drama League for Performance of the Year. The Broadway show is nominated for 10 Tonys. As Elaine Stritch put it in a recent interview: "Christine Ebersole in 'Grey Gardens': That's coffee! That's coffee! That's talent!"

The tall, blond Ebersole, relaxing backstage at the Walter Kerr Theatre before a Wednesday matinee in loose, pajama-like pants, a black coat and leopard-print mules, says being cast in the show was "fate." Actually, she talks about fate quite a bit. Her red-carpeted dressing room, featuring a pillow-laden leopard-print daybed and gold and red curtains, is like a shrine. Covering a large gold mirror are rosaries, one of which has saint images contained in each bead. On the walls hang several crosses (when pressed, Ebersole says she's Christian -- "My name's Christine; I have no choice!"). But there is also a mandala, a Buddha, an image of Krishna, a book on shamanism and, on the door frame, a mezuza. Her doting dresser, Jill, jokes, "She likes to cover her bases."

But it runs deeper than that. Ebersole was born in Illinois and raised Unitarian but now sounds more like an adherent to theosophy, the 19th-century spiritualist movement that sought to unify all the religions. She sees spiritual forces at work in every aspect of her career and personal life. Speaking of Little Edie, she says, "I do feel like I'm channeling her." And she believes that both Edies' spirits are with her when she performs. "I believe that when people die, they only leave their bodies," she explains. "But our spirit doesn't have a beginning or an end. So when we leave our bodies, we still influence things, but it's just from an invisible place -- from beyond the veil."

The musical contrasts the stultifying propriety of the women's lives in 1941 (Act I) with the oddly liberating squalor of their lives in 1973 (Act II). A 1975 review of the film in the New York Times said it made moviegoers feel like exploiters, but the musical, more clearly than the film, illustrates how the high-society women were, in their incredibly weird way, happier in the filth than they had been in the finery.

"They welcomed the Maysles," says Ebersole. "They were very proud of the movie. And they were very happy the movie was made. We're, 'Oh my god, the neighbors are coming! We've got to clean up!' You don't want people to see your mess. But they didn't care. In fact, they said that the only thing they wished of the film was that there was more music and more dancing." Et voilà.

In recent years, Ebersole has done period pieces like "42nd Street" (for which she won a Tony) and "Dinner at 8" (for which she was nominated for one). In the latter, she delivered a pitch-perfect rendition of '30s-comedy hysteria. She seemed as if she'd stepped right out of a Preston Sturges movie and onto the stage. Old movies have an escapist quality she appreciates: "Even the bad elements could be sentimentalized or made not soooo bad!"

Like the screwball comedy stars she admires, Ebersole is able to laugh off the more difficult parts of her career, such as the season she spent on "Saturday Night Live" in 1981. A "Weekend Update" co-anchor, Ebersole, who had no stand-up comedy experience, at times seemed distinctly uncomfortable. "I was getting off the road playing Guinevere with Richard Burton in 'Camelot' ... My marriage was ending. I was moving out of my apartment. So I got a new job, was getting divorced and moved in seven days. It was like standing on the head of a pin."

She moved to Los Angeles in 1985, did film ("Amadeus," "Tootsie," "My Favorite Martian") and TV ("The Cavanaughs," guest spots on "Will & Grace" and "Ally McBeal), then moved back to New York in 1999. She now lives in Maplewood, N.J., in a very full house with her mother, her husband, Bill Moloney, and their three children. "The Kristin Chenoweths and Audra McDonalds go home and go to bed," said Frankel, who described Ebersole as a superwoman. "She's got eight shows a week, three kids, 47 animals ... a partridge in a pear tree."

How many animals, exactly?

Ebersole hoots. "Let's see ... two cats, two kittens, beyond cute, three dogs, a guinea pig and a fish." The rescued kittens are just 4 weeks old -- gifts, she says, from the universe after her favorite cat was killed by a car. "It was kind of a miracle that this presented itself to me at this time. Because this is really the crazy time, with the nominations and the pressure and the luncheons and the speech here and the interview there. It's a way of focusing in on what's real."

Ebersole dotes on her three children, all adopted: Aron and Mae Mae are 10; Elijah is 13. Her decision to adopt she calls "a moral reckoning. At first, I thought that my value as a mother depended on whether I had the ability to get pregnant. And not to be able to get pregnant, I had this sense of being a failure. And then I realized that was an illusion, that being a mother was not defined through biology; it was defined through spirit."

While Ebersole's enthusiasm for life and all its creatures has a giddy live, live, live! quality reminiscent of Auntie Mame (whom she played at Paper Mill), she's the opposite of flighty. Her connection with the Edies (whose Grey Gardens she has visited twice, once to sing "Evergreen" at a party thrown by its current owners) is no ghost story. "Ghosts are like Casper. I don't think of it as ghosts. Ghosts seem empty and hollow, but spirit doesn't send that same message to me. Spirit seems full."

Ebersole is grateful she didn't grow up sway to any one philosophy. "You know, I think I'm lucky I was raised Unitarian," she says. "Without religiosity, I was free to just take everything in." Ebersole, like Little Edie, cobbles together outfits and worldviews as they suit her, and they suit her fine.