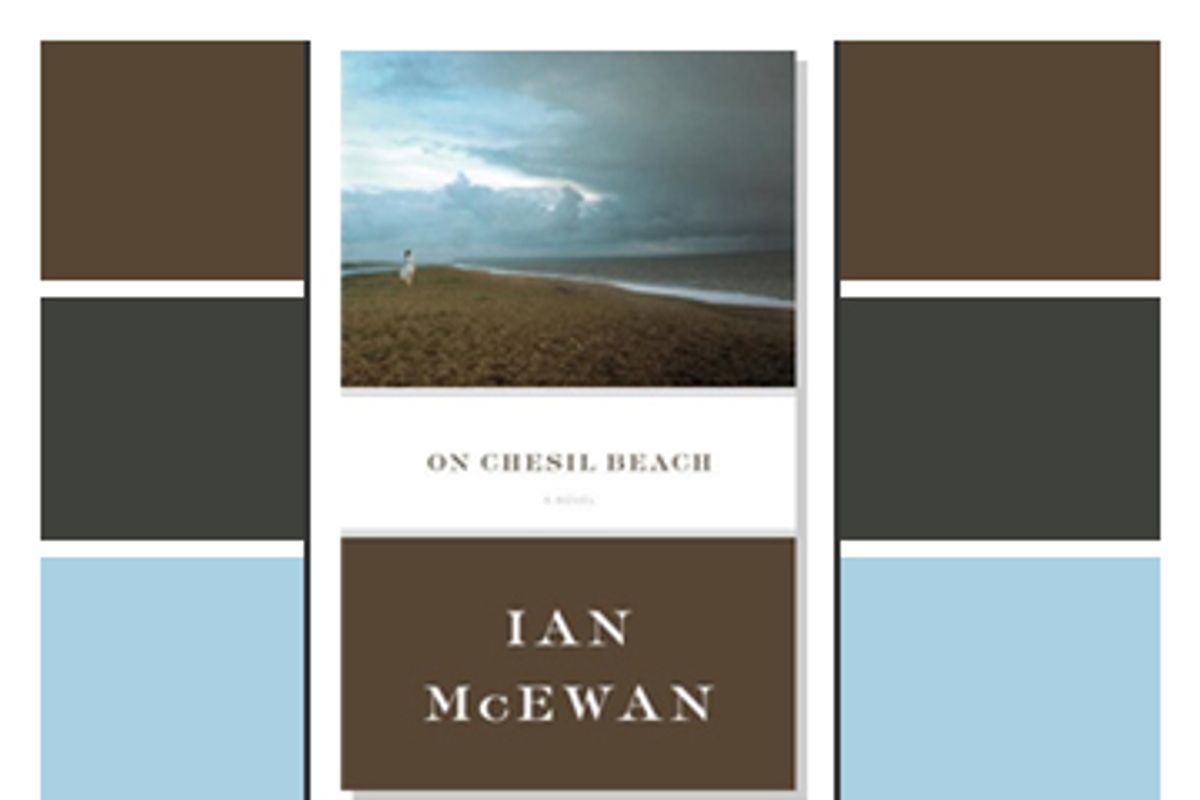 Ian McEwan's recent work has been a master class on the elasticity of time in fiction. The first half of 2002's "Atonement" unfolds, in voluptuous and horrifying deliberation, with the disastrous events of a fateful summer day in 1935, while "Saturday" (2006) transpires on Feb. 15, 2003, in the shadow of a giant antiwar demonstration. His latest novel, "On Chesil Beach," goes this life-in-a-day conceit one better. Up until the last few pages, the frame of reference is a single evening, from dinner till dawn, in the lives of two nice -- even boringly nice -- people, "polite to a fault": Florence, an aspiring violinist, and Edward, a university grad originally from the sticks with budding authorial ambitions.

It's not just any night, but Florence and Edward's wedding night; and not just any wedding night, but one shared between two virgins. (The Lennon-Ono title would have been snappier than "On Chesil Beach," which, at least to the American ear, sets up lingering associations to the codgerfest "On Golden Pond.") Slim enough to gulp down in one sitting, "On Chesil Beach" could double as an effective pamphlet on the benefits of premarital couples counseling.

The setting is an English seaside hotel in 1962 -- one year, as we know, before Philip Larkin's annus mirabilis when "sexual intercourse began" for the poet ("Between the end of the "Chatterley" ban/And the Beatles' first LP"). Florence and Edward first meet at a ban-the-bomb rally, but during their year of courtship, physical contact has been a matter of slow conquest: "The evening in the cinema at a showing of 'A Taste of Honey' when he took her hand and plunged it between his legs set the process back weeks."

Indeed, it is Edward's certainty of the impossibility of sex out of wedlock that spurs him to pop the question. In love with Edward, Florence understands the course that their affections should take, and "in optimistic moments she tried to convince herself that she suffered from no more than a heightened form of squeamishness," yet she finds it difficult to shake her distaste and dreads the impending mattress matters. Her new husband is, of course, eager to consummate the union, but in truth both are petrified by their inexperience, each entertaining the notion that the other will have a sense of how to proceed with the actual mechanics of the deed.

In lieu of plot, McEwan applies a fine brush to character. He toggles between the tensions of the night in question and his protagonists' lives up to this point, apart and together. Though both have attended college, they are products of subtly different classes. Rougher-edged Edward -- he's an occasional brawler -- is the son of a primary school headmaster and a mother left brain-damaged as a result of a senseless accident. His home is in perpetual disarray, whereas Florence's house is grand enough that Edward gets his own room when he comes to stay. Her father manufactures scientific equipment, and her mother -- in sharp contrast to Edward's invalid mom -- is a philosophy professor. Yet both feel stifled by their families; in one of the book's more delicate constructions, McEwan puts them on a gentle collision course as both wander away from home one afternoon and meet for the first time.

The familiar, alas, is the one thing that might help them on their wedding night. How to get back to their previous amiability? The fear of what's to come, so to speak, is overwhelming. During and after a grandly presented but singularly unappetizing dinner ("slices of long-ago roasted beef in a thickened gray, soft-boiled vegetables, and potatoes of a bluish hue"), the two flounder in silence, descending into a sort of prisoner's dilemma. They lack the vocabulary. Anything they can think to say is inadequate to their situation, to the quelling of opening-night jitters; the twist is that silence is somehow worse. When Edward manages to say, "I'm so happy here with you," and Florence responds with "I'm so happy too," the mirroring sentences show that they're both trapped, on an island the size of a bed, in an ocean the size of a life. All their previous conversations cannot help them, and with frightening swiftness everything is on the verge of ruin.

"English is a beautiful language, full of misunderstandings," says Robert, the sinister presence in McEwan's second novel, "The Comfort of Strangers." Published over a quarter-century ago, "Comfort" is roughly the same length as "Chesil" and makes for a tantalizing precursor. Mary and Colin are travelers in an unnamed city, where every turn is the wrong one and irritation runs high. After one too many encounters with Robert and his odd wife, Caroline, the couple banter to keep the dread at bay, but in vain: What's left is unspeakable. Though "Comfort's" elegantly (or inhumanely) sustained tone of menace couldn't be more different from "Chesil's" tear-damp saga of failure, both are snapshots of couples free-falling into terror. The physical S/M of the first book finds a counterpart in the unintended emotional cruelties of the latter.

"Comfort" takes place in the equivalent of a Giorgio de Chirico painting, all harsh sun and enigmatic corners, a place of erasure and anonymity. "On Chesil Beach" is, by contrast, meticulous in its specificity of time and place. The historical coordinates aren't simply important, but indeed are integral, to the success of McEwan's project. The tension is between what happened and how it has been interpreted -- something he did to dramatic effect in "Atonement." The first two sentences of "Chesil" immediately display a shifting of tense: "They were young, educated, and both virgins on this, their wedding night, and they lived in a time when a conversation about sexual difficulties was plainly impossible. But it is never easy." They were; they lived; it is. Who, exactly, is telling the story -- and when?

Sometimes the constant contextualizing is welcome ("This was not a good moment in the history of English cuisine"); occasionally it gets fuzzy ("How did they meet, and why were these lovers in a modern age so timid and innocent?") or keeps the reader at arm's length, as though siphoned from a textbook: "In the early nineteen fifties, [Edward's father's] homecoming routines were hardly typical of a professional man."

But after "On Chesil Beach" climaxes, the masterfully modulated denouement fast-forwards through the decades to come to our present day -- and prods us to consider what this book really is. For Edward's early pipe dream was to write "a series of short biographies ... of semi-obscure figures who lived close to the center of important historical events." Sir Robert Carey, anyone? Another possible subject: A 14th century "flagellant Messiah" named Konrad Schmid. "As Edward saw it, each history would be no longer than 200 pages and would be published, with illustrations, by Penguin Books, and perhaps when the series was complete it could be available in a special boxed set."

Could it be that the little-big book in our hands -- which totals 200 pages on the nose -- is written by Edward, the historian at last, his subject none other than himself?

Ed Park is a founding editor of The Believer.