I'm secretly addicted to spirulina. It tastes mossy, costs a fortune and makes my lips green, but this highbrow pond scum may turn out to be a wonder algae. 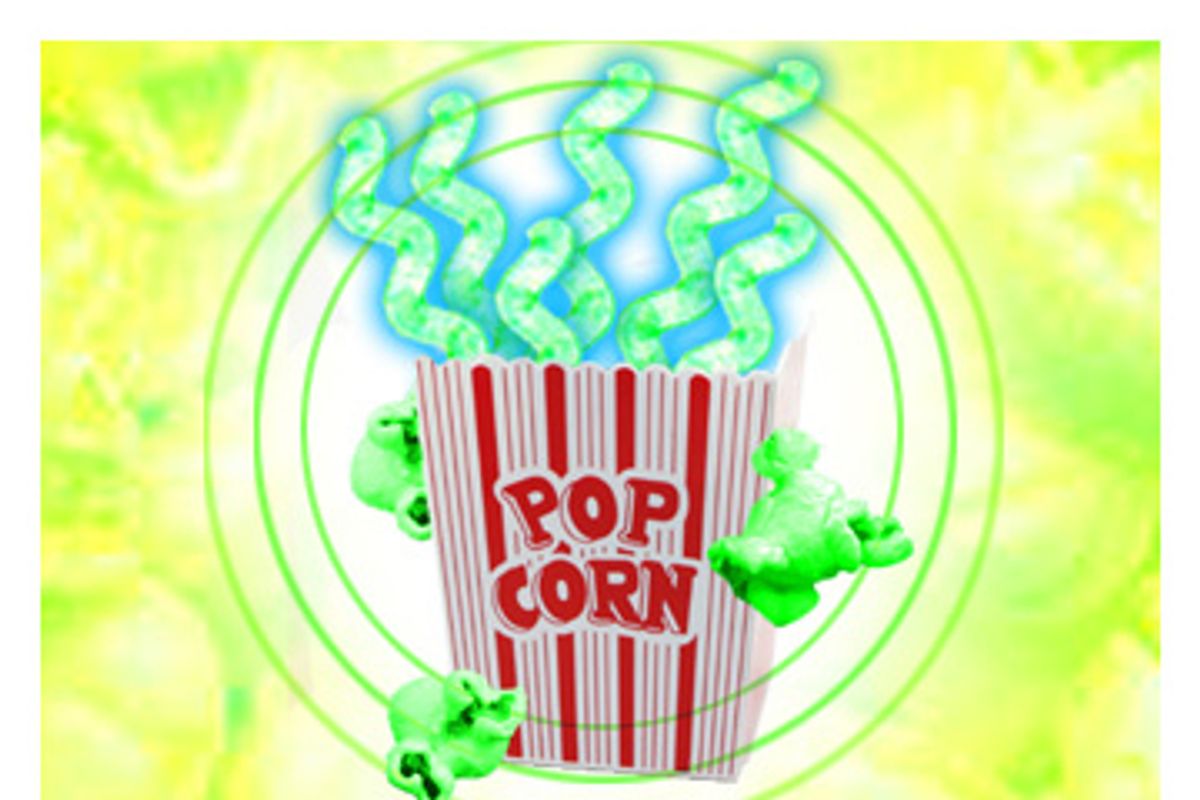 Spirulina are free-floating filamentous cyanobacteria characterized by cylindrical, multicellular trichomes in an open left-hand helix that occur in tropical and subtropical bodies of water with a high pH and concentrations of carbonate.

In other words: pond scum. And I'm addicted.

Nights, I often disappear into my basement with a double-bagged inch or two. I handle it as if it were plutonium, because as foods go, spirulina -- the food product, a singular noun -- is outrageously expensive ($56 a pound at my local Whole Foods, on the odd days it's actually in stock) and because it stains anything it touches a dark, wet-looking green. This is why I eat it only in our dank downstairs family room with its scatter of cat toys, old computer equipment, and castoff furniture.

After I've had my fill, two or three teaspoons at most, I very carefully rewrap what's left and take it upstairs to the kitchen where my children are at the table doing homework and my husband is making tea. He kisses me and uses a paper napkin to dab a smudge from my chin. When I go into the bathroom to wash myself properly, I see in the mirror that my lips are outlined in Gothic midnight jade. But my skin, normally wan and delicate, has an almost rosy glow. And my eyes shine.

The first time I tasted spirulina, it was by chance.

It was four years ago and I was in New York City visiting literary agents at my own expense. That meant staying in a hotel room the size of a wheelchair-accessible restroom stall and eating on about $20 a day. My first night in town, I stopped at a bodega in the Village to pick up two small bags of popcorn and a bottle of sparkling water. This was an acceptable dinner, I decided, because the popcorn was coated with something its label promised was ultra-nutritious, high in protein and vitamins. I was disturbed when, once back in my room and settled on the bed, I opened the bags to discover that the wonder ingredient was a brilliant, aqueous green. Then I got a whiff of its briny odor -- redolent of the slimy, leafy stuff that washes up in tangles on the Eastern Seaboard -- and quailed.

But this was all I had to eat until morning and I was hungry after walking the city all day. So I took a tentative taste, and another. A few more bites and I was hooked.

Whatever was on this popcorn tasted much subtler than it smelled: loamy, mossy and salty, with a verdant after note of sex. I ate the entire bag while watching a rerun of "Monk." Then I opened the second, which was labeled "spicy." This version smelled better, and it was far more festive looking: a Christmasy blend of sea bottom green and chili pepper red. And it was like nothing I'd ever tasted before: crackling, nutty, oystery and wild. The way a deep-water fish might taste if it were stuffed with sweet corn and fire. I ate until only the dregs remained.

I half expected to be bilious the next day, hung over from my junky, salty meal. But I wasn't. In fact, I awoke feeling wonderful: inexplicably healthy and strangely "clean." I didn't link this directly to the spirulina, not at first. But when I returned to Minneapolis and made my own algae-covered popcorn, I had the same rejuvenating experience. I began craving it, eating spirulina three to four times a week. Over the next few months, I noticed that my hair felt thicker, my clothes fit better, and my chronic allergies seemed to have disappeared. Yet, something about this habit seemed shameful and weird.

A restaurant critic, I'd spent much of my career talking to chefs and gourmands about good food. No one I knew was eating spirulina. This isn't a delicacy you can bring out to share with your friends, slice up, and enjoy with a nice bottle of wine. Eating algae went counter to all my epicurean instincts.

At one point, I decided to get the green monkey off my back for good. I went cold turkey: no spirulina at all for three months. And though the craving disappeared within a week or two, my nails soon grew brittle, my allergies came back with a vengeance, and I had less stamina during spinning classes. Finally, I capitulated, and the response was swift. After only a few doses of spirulina, I felt as I had in New York: clear, clean and full of energy. Perhaps -- I remember thinking -- I'm actually some sort of sea creature. Part mermaid.

The truth is less fanciful. It's likely I simply needed protein, vitamins and minerals such as iron, manganese and zinc.

As a Minneapolis restaurant critic, I was eating spectacularly well. But often my diet was governed by editorial directives rather than hunger; if I were working on a cover story called "50 Best Desserts," for instance, I might eat five varieties of crème brûlée, when what I really needed was steamed tofu and broccoli. Supplementing with spirulina -- which is rich in all of the elements listed above plus Omega-3 and Omega-6 fatty acids, calcium, potassium, copper, folate, beta-carotene and vitamin K -- was an ideal way to achieve balance.

"Spirulina is one of the only non-animal sources of complete protein," says Jessica McNamara, product specialist for Frontier Natural Products Co-op, which supplies spirulina to natural food stores and cooperatives throughout the country. "It has all eight of the essential amino acids in the correct proportion, plus 10 of the 12 nonessential ones. So one serving all by itself translates into 5 grams of complete protein for the body. And for that reason, it's become really popular with strict vegans and people in the raw foods movement."

It's also extremely low in calories (26 per tablespoon), carbohydrates and fat. And because the carbs it does contain are complex, married to a protein- and mineral-rich base, McNamara says it's possible spirulina also stabilizes blood glucose levels by slowing the body's process for metabolizing sugars and simple starches. But she's reluctant to make any overt health claims.

Others are less reticent.

A 2001 study in Journal of Medicinal Food, conducted by three medical researchers in India and titled "Role of Spirulina in the Control of Glycemia and Lipidemia in Type 2 Diabetes Mellitus," showed that a two-gram dose of spirulina daily over a period of just two months lowered blood glucose levels "appreciably" in 25 patients with diabetes. It also uniformly improved their lipid profiles, lowering both LDL cholesterol and triglycerides, while raising HDL cholesterol just a tick.

And a 20-page article in the spring 2002 edition of Journal of the American Nutraceutical Association went much further. It claims spirulina, or "dihe" -- a natural food that's been consumed for more than 400 years, originally by the Aztecs in Mexico and currently by the Kanembu tribe in the Republic of Chad -- has anti-inflammatory, antihistamine, antioxidant, anti-cancer and anti-viral properties. Most of the studies it cites were conducted with rats, hamsters, mice, chickens and prawns -- but the article also refers to a handful of human studies, including one in Kerala, India, where pan tobacco chewers with precancerous mouth lesions were given either one gram of spirulina per day or one gram of a placebo; after a year, researchers observed a complete regression of mouth ulcers in 45 percent of patients taking spirulina, but only 7 percent of those in the control group. And in another study, aimed at reducing the fasting blood sugar of participants, it was determined that 2.8 grams of spirulina three times a day not only improved glucose levels, it also led to statistically significant weight loss.

This document goes so far as to recommend that spirulina be used for patients with HIV -- not to cure them, per se, but to bolster their flagging immune systems and protect them from opportunistic infections. It concludes: "Despite the few human studies done so far on the health benefits of spirulina, the evidence for its potential therapeutic application is overwhelming in the areas of immunomodulation, anti-cancer, anti-viral, and cholesterol-reduction effects."

It's worth noting that the article's author, Amha Belay, is vice president and scientific director for Earthrise Nutritionals Inc., a California company that calls itself a "pioneer and innovator of premium quality Spirulina." Personally, I assume Belay's work to be mostly a self-serving manifesto. And yet...

There's my own anecdotal data: the fact that my lifelong allergy symptoms have virtually disappeared. There's also the much more compelling evidence that a few real, unbiased, academic researchers have been won over.

Jane Teas, a research assistant at the South Carolina Cancer Center, has been studying the health effects of seaweeds and algae for more than 20 years. Back in 1984, when she was a fellow at the Harvard School of Public Health, Teas discovered that brown seaweeds -- primarily kombu and wakame -- helped prevent breast tumors in rats. Today, she continues to recommend seaweed for women (especially those prone to breast cancer); but she warns that too much can cause an iodine overdose, and ultimately thyroid disorders.

Spirulina, she says, poses no such risks.

"We know that spirulina stimulates the immune system, keeping envelope viruses, such as HIV and Ebola, from attaching," Teas says. "And it has some role to play in stabilizing blood sugar, controlling arthritis and fighting cancer. It even helps prevent skeletal muscle damage, which is why the Chinese and Cuban Olympic teams eat it daily."

If, in addition to giving me a daily jolt of iron, spirulina also makes me less prone to develop diabetes, cancer and high cholesterol, that's a huge and unexpected benefit. And if it protects me from ligament strains when I'm hiking, that's cool, too.

But I wish it were more accessible, and less expensive. According to McNamara, the high price of spirulina is due to a combination of factors: first, the environment it requires to grow -- a precisely formulated high-saline, high-pH bog -- and second, the stricter National Organic Program standards set in April 2005, which eliminated many sources previously cultivating spirulina. (Because most American consumers of spirulina and seaweed also adhere to organic or raw foods diets, it just doesn't pay to grow commercial-grade products.) Farmers don't stumble into cultivating spirulina the way they might, say, soybeans; it takes a dedicated production facility like the one at Earthrise, which has partnered with a Japanese company, Dainippon Ink and Chemicals, to corner the world market on micro-algae products.

If companies are paying attention to the cycles of supply and demand (and I'm certain they are) all their efforts will go into producing pricey pre-made supplements, rather than affordable food-quality spirulina. Because more than half the people who take algae for health reasons prefer to swallow it in caps. But as with any vegetable -- sea, field or root -- eating spirulina in its real, unprocessed form probably offers the greatest potential benefit. Those who want to mask the flavor sometimes add a small amount to smoothies containing vibrant-tasting fruit, such as blueberries, or sprinkle it on salads and use a pungent dressing.

"Honestly, there are a lot of people who just choke it down," McNamara says. "But then there are those who become acquainted with it and learn to think it tastes great."

Me? I take my spirulina the way I learned to that first night in New York: sprinkled on organic white popcorn that's been cooked in olive oil and tossed with fresh-squeezed lemon juice and cayenne. And if I can get the timing just right, I still eat it while watching reruns of "Monk." Only these days, instead of fretting, I feel virtuous. Green lips and all.