TV on the computer

I would love to ditch cable TV. So I tuned in to Apple TV and Joost, the hottest digital alternatives. 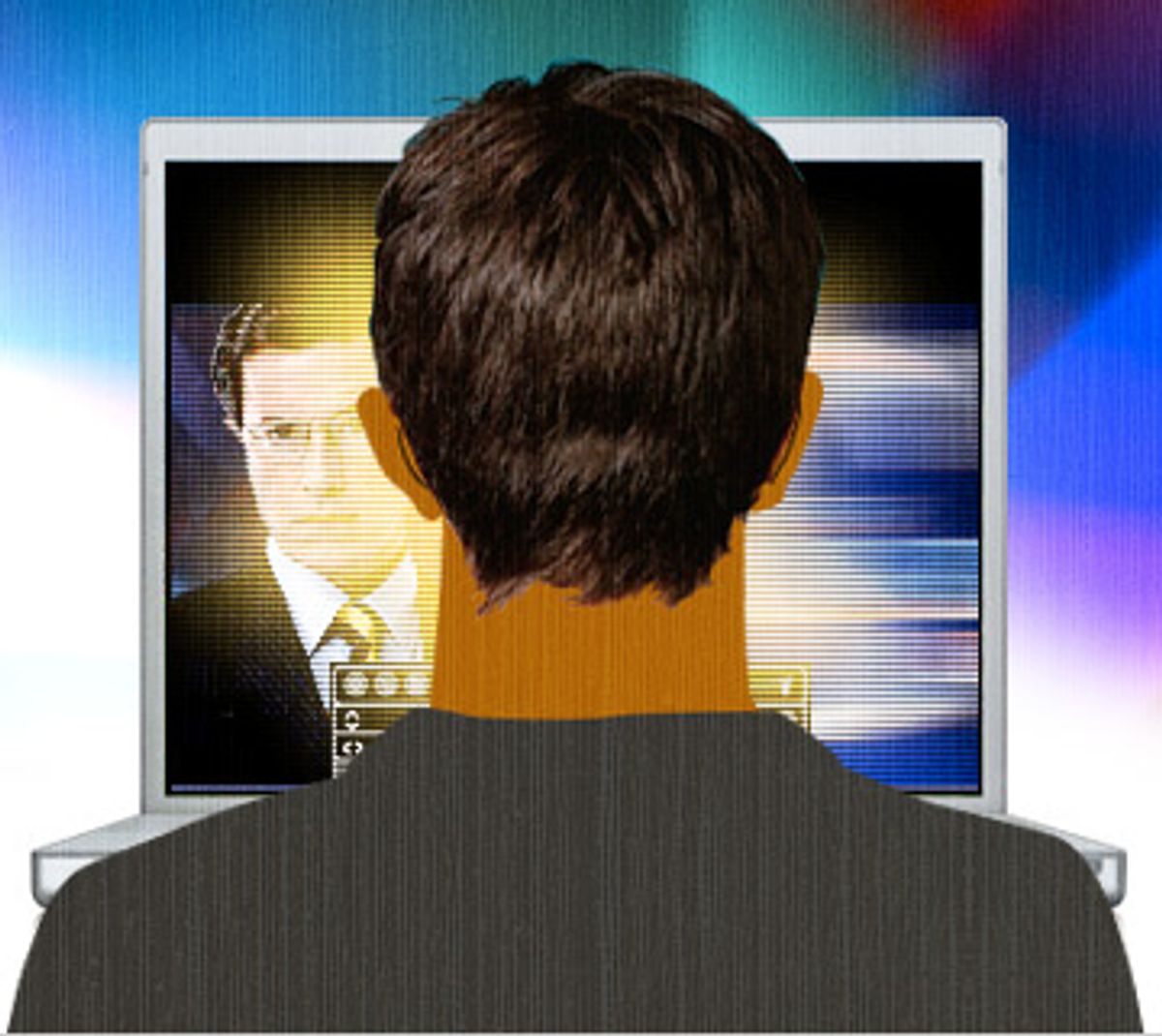 Two weeks ago, I unhooked the magical cable that connects my television to the world's wide sea of entertainment and ephemera. The divorce was my own idea, prompted by a wandering eye: I still wanted to watch a lot of television, just not through cable anymore. After decades of cruising by on their duopolistic haunches, cable and its cousin, satellite TV, which together rank lower in customer satisfaction than the airlines, the post office, even health insurance firms, face the vanguard of consumer choice. Television (the content, not the box) can now come to us in so many ways -- delivered to the door in stacks of postage-paid DVDs, ordered up through Apple for the cost of an appetizer at an Indian takeout, and most recently, available for free on online services like Joost. In my separation from cable, I tried several of these alternatives, including Apple TV and Joost. And while they held some promise -- especially Joost -- they're not quite ready, alas, to replace the pipe coming through the wall.

The pain caused by cable TV is a recurring condition; it flares up once a month, felt in pocketbooks across the land. The industry's standard model forces customers to pay more than they want to pay in return for a whole lot of what they don't need. For $18 a month, my own service provider in San Francisco, Comcast -- more unloved by its customers than nearly any other company in America -- has a package called "Basic Cable," so named because it offers basically nothing. Other than local channels (which are free anyway, over the air), Basic gets me two flavors of C-Span, the Discovery Channel, and various shopping networks, including Jewelry TV. A fellow of simple tastes, in truth, I only really need a couple of additions to basic -- I'd like Comedy Central and perhaps one of the three 24-hour-news networks. But to get even a single channel more, I'd have to pay almost three times as much. Comcast's next-cheapest programming feed ("Standard Cable") is $52 a month, for which I get dozens of channels I'd never watch -- Spike TV, Disney, Jade TV, many others -- but of course no premium channels like HBO, and none of it broadcast in high-definition format.

But what am I going to do? Satellite, which costs around $40 for a good set of channels, is an option for some. But for me and millions of other apartment-dwellers, cable is my only fix, and Comcast is essentially making an offer it knows I can't refuse. And so I've been paying. And so have the rest of us. Cable rates rise faster than the rate of inflation; cable companies swim in higher and higher revenues; customers routinely report dissatisfaction; but still we go on subscribing because we have no choice. At least until recently.

I've been getting TV through my computer for several years, much of it, as I've written before, illegally, using file-sharing networks such as BitTorrent. In the past couple years, though, programmers have begun to offer their shows legally on the Web, and since late 2005, Apple has sold more than 50 million shows through iTunes (they go for $2 per episode, or $35 for a show's entire season). In theory, Apple's model is a fantastic idea because for many of us, paying for specific programs works out cheaper than paying for cable. The digital media consultant Jeremy Toeman points out that if you regularly watch 10 TV shows, you can get them all through iTunes for $350 a year, or $29 a month. If you watch 15 shows, your monthly iTunes bill would be $44. The only problem with this setup has been the screen -- there's been no easy way to get your iTunes programs from computer monitor to the TV. And this is what Apple aimed to solve when, in March, it released the Apple TV.

But Apple TV -- a cute, shiny $300 box that wirelessly joins your television in the living room to the shows you've bought on your computer -- is half-baked. I agree with the reviewers who've praised its easy setup and elegant user interface, and it sure does look pretty next to my TV. The trouble is, Apple TV doesn't do much other than look pretty. You can't sit down to Apple TV and choose to watch a show from the iTunes Store because Apple TV -- in the sort of major usability blunder one never expects from Apple -- does not connect to the iTunes Store. Instead, it can only play the shows you've already purchased through your computer. Worse, shows are downloaded, not streamed, which means you've got to wait 20 or 30 minutes, at least, to start watching something. Instant gratification is the soul of television, and by forcing you to leave the screen, and then to twiddle your thumbs, Apple TV ruins the fun. (And if you're OK with this halting experience, buy a $250 video iPod instead; it will connect to your TV and play music, too.)

Steve Jobs, Apple's CEO, recently called TV a "hobby" for Apple alongside its three main businesses (computers, music and phones). I hope Jobs isn't picturing one of those weekend hobbies like stamp collecting or stone skipping, and instead is aiming for something along the lines of jousting or Civil War reenactment, something Apple really throws itself into and make its own. Apple TV could be a killer device, and perhaps in their downtime from creating the God machine, Jobs and his team might be working to make it one. Right now, though, Apple TV is of little use to those looking to ditch cable.

Like Apple, Joost, a new service created by Janus Friis and Niklas Zennström, the rock-star European programmers behind Kazaa and Skype, also carries television shows over the Internet, but Joost rests on a very different economic model. Joost is free to viewers, but it carries ads. The software, which is currently in invitation-only "beta" mode (but invitations are easy to come by), essentially turns your Mac or your PC into a television. I've been testing it on both platforms since April, and I found the experience sometimes thrilling and sometimes frustrating; mainly, Joost has made me drool over what it may one day become.

Joost has a clean, stylish interface, with large on-screen graphics and an intuitive navigation system that allows you to quickly choose what you want to watch. Like a standard television, Joost displays a list of channels, and in each channel there's a list of available shows. In my tests, most of the time, clicking on a show produced near-instant results -- the program would start to play within a few seconds. Joost runs on a peer-to-peer network, the same brilliant concept behind Napster, Kazaa and Skype, which means it transfers shows to your machine from several other viewers. The design, theoretically, is a very efficient way of distributing large video files through the Internet, and when it did work, it was amazing. The video filled up my computer's 20-inch screen and was as clear as a cable broadcast on my television. Like TV, the shows were sometimes interrupted by ads, though ad breaks lasted for no more than 30 seconds. But there were frequent network errors; sometimes when I tried to watch a show, I'd get a message saying it wasn't available, and other times the show would play poorly, stopping and starting along the way, or the video would look like it had been captured on VHS. The system isn't nearly as reliable as it would need to be to replace your cable subscription -- at least, it isn't yet.

The main problem with Joost, though, is not how the videos play, but what there is to watch. The company has signed deals with Time Warner and Viacom, and it's in talks with several other studios to get more content, but at the moment, Joost's lineup resembles the list of channels I'd leave out if I could choose what to get on cable (e.g., Spike TV and the Dude Channel). Even the channels I would watch -- Comedy Central, MTV -- don't include the shows I'd watch on them. "The Daily Show" isn't on Joost; you can, however, watch a lot of old episodes of "Punk'd."

And then, finally, you've got the screen problem again: How do you get Joost from your computer to your TV? The tech-savvy first-adopters who now use Joost are content with just hooking up their computers to their TVs; if you use a small, silent machine like a Mac Mini, it works pretty well, too. The first thing you think about while watching Joost, though, is how perfectly it would meld with Apple TV. Apple TV, right now, is a pretty box that sits next to your TV without much purpose, while Joost is smart application that sits on your computer yearning to be near the TV. Hackers of Apple TV have reportedly already put Joost on the Apple device, allowing Internet TV to stream straight to the telly. If this was ever made easy, it could really be a cable killer. And perhaps it'll happen. "We would love to put Joost on the Apple TV platform," Mike Volpi, who's just signed on to be Joost's new CEO, told the tech news site GigaOm on Monday. "We know we can make it run on any operating system."

Until then, I'll be reluctantly sticking with cable.