The end of Bush's kangaroo courts?

The dismissal of two cases in Guant 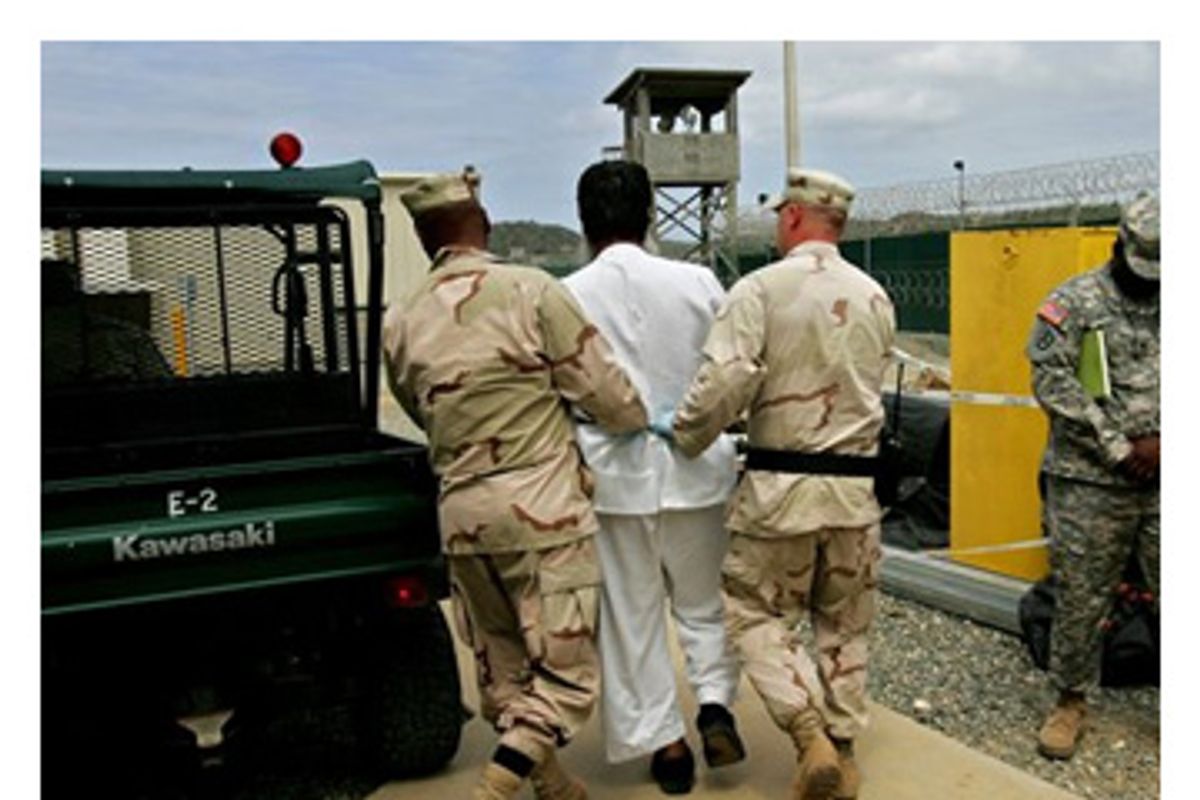 If the Bush administration had any sense, Monday's courtroom spectacle would mark the death knell of the military commissions in Guantánamo Bay, Cuba.

On Sunday evening, I climbed off a chartered jet full of journalists, cameramen, lawyers, military handlers and other independent observers, anticipating what was to be the start of the first full-blown trials here. After more than five years in U.S. detention and multiple court challenges, two detainees -- Omar Khadr, who was 15 when he was arrested, and Salim Hamdan, alleged to be one of Osama bin Laden's drivers -- were finally going to be brought to trial. But by Monday evening, both cases had been dismissed, and the fate of any future such trials was left in serious jeopardy.

The proceedings began with Khadr, a gangly and sad-faced Canadian accused of killing a U.S. soldier in a firefight in Afghanistan, who has now spent a quarter of his life in detention. The expected fight over legal representation was resolved quickly, with both sides agreeing to find a way for Khadr's chosen Canadian lawyers to participate, despite rules requiring civilian defense counsel to be U.S. citizens.

But then came the bombshell: The presiding judge, Army Col. Peter E. Brownback, announced that he was dismissing the case -- without even any briefing by the parties -- because the court lacked jurisdiction to proceed. A palpable buzz flooded the courtroom. The reasoning was this: Congress had granted military commissions jurisdiction over anyone found to be an "unlawful enemy combatant." But Khadr, the colonel concluded, had been classified only as an "enemy combatant" by the military review board that determined his status (a term that includes members of a regular army entitled to prisoner of war status). Therefore, the commissions did not have the authority to hear Khadr's case.

Hamdan's case followed a few hours later -- different parties, a different military judge, but the same conclusion. Case number two was dismissed with some audible sighs amid the broad smiles of others.

The unexpected outcome is fitting and a win for the rule of law. The Bush administration's attempt to create an entirely new system of quasi-justice -- one without any established precedent or rules, where even the basis for jurisdiction was made up on the fly -- has been dysfunctional since day one.

Established with fanfare more than five years ago, the military commissions were touted by the administration and its supporters as the best forum in which to bring the masterminds of 9/11 to justice. They "don't deserve the same guarantees and safeguards that would be used for an American citizen going through the normal judicial process," Vice President Cheney declared at the time. Instead, suspected terrorists would be deprived of the basic principles of due process and could potentially be convicted on evidence they had never seen -- including evidence obtained by interrogators using torture.

Only 10 charges were ever brought under these military commissions. In June 2006, the Supreme Court found the commissions unlawful, holding the administration had failed to seek congressional approval for them, and the pending cases were dismissed. But a few months later, Congress came to the administration's rescue, rushing through legislation to authorize the continued use of commissions. It passed the Military Commissions Act of 2006, which gave the president the authorization he needed to proceed.

The first and only conviction came just two months ago, when Australian David Hicks, the former kangaroo skinner, pleaded guilty to providing material support to terrorism in exchange for a sentence of just nine months, to be served in Adelaide.

Compared with the prosecution of terrorists in the federal court system, the military commissions are an abysmal failure. In the same five and a half years that the commissions have convicted just one individual, the Department of Justice has successfully prosecuted hundreds of terrorism cases, including dozens of international ones. A few are well-known: Richard Reid, the shoe bomber arrested in Logan airport and sentenced to life in prison; Zacarias Moussaoui, who got life in prison for his involvement in the Sept. 11 attacks.

Others are less familiar but significant nonetheless: The Lackawanna Six, who got seven to 10 years each for training in a camp in Afghanistan prior to Sept. 11. Ahmed Omar Abu Ali, who got 30 years for training with and supporting al-Qaida. Mohammad Ali Hasan al-Moayad and Mohammed Zayed, who got 75 years and 45 years, respectively, for channeling money to al-Qaida and Hamas. The list goes on. All are now incarcerated and serving out their sentences, having gone through an established U.S. system of justice.

By contrast, the few relatively low-level guys to be charged by the military commissions have been monitored by journalists from all over the world and been the subject of much fanfare -- including article after article exposing the commissions as unfair, biased and nonsensical. The system has been put on trial rather than the alleged high-level detainees it was designed for.

And it should remain on trial until it is dispensed with for good. Its ad hoc nature becomes more apparent with every proceeding.

The previously constituted Combatant Status Review Tribunals (CSRTs) -- the military review boards initially created by the Department of Defense to ascertain the status of Guantánamo Bay detainees -- didn't make such a distinction between types of enemy combatants. Thus, the administration now has three choices. It could appeal the ruling to the Court of Military Commissions Review, a court that does not even yet exist. It could redo the CSRT process, applying the definition of "unlawful enemy combatant" approved by Congress, to see if the suspects qualify as such. Or, it could admit that its experimental system of quasi-justice has failed, close up shop, and bring any future charges in federal court or courts-martial -- systems with established rules and precedent, where the alleged terrorists can finally be brought to a trial worthy to be termed justice.