Traitor Vic: Minutes away from losing his badge, Mackey plays his best game of hardball yet. 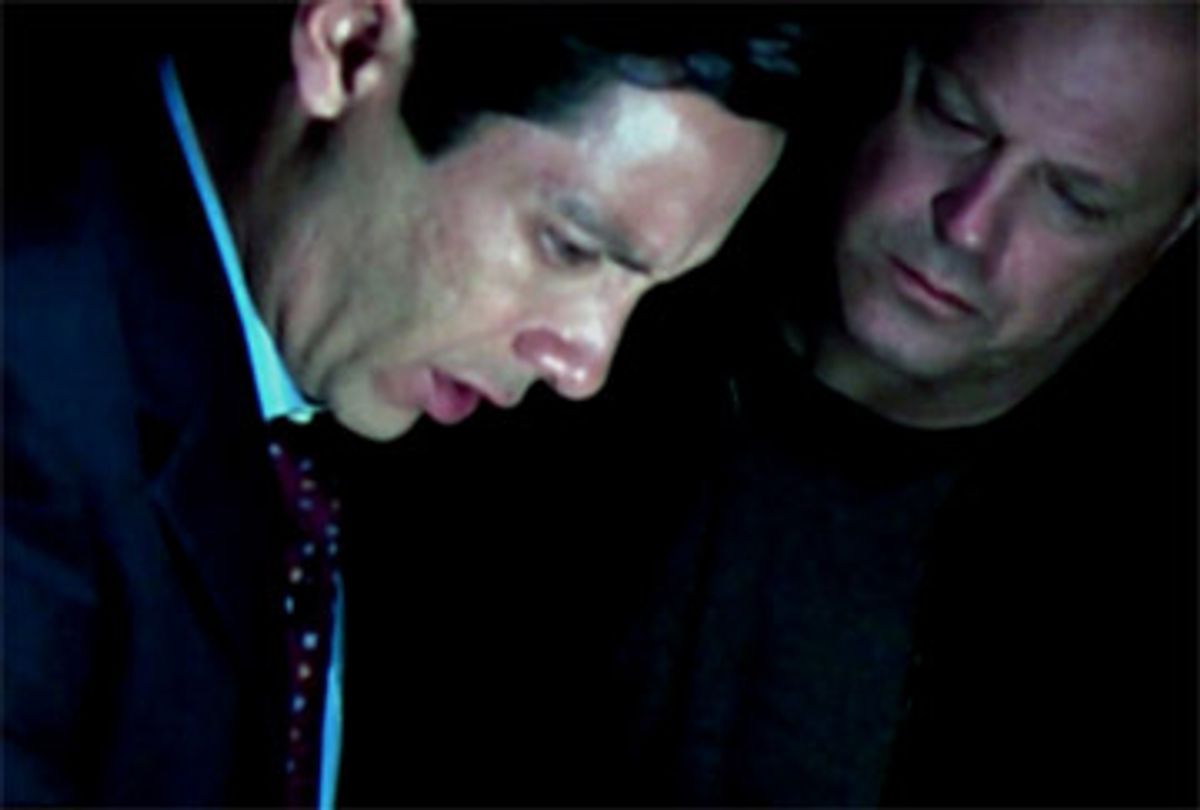 "Are you ready for this?" That's the question Vic Mackey asks city councilman and longtime foe David Aceveda at the end of Tuesday night's riveting finale of "The Shield." Aceveda looks a little shellshocked at the treasure-trove of blackmail Mackey has just stumbled on, the key to unlocking a master plan by the Mexican drug cartel to set up shop in Farmington. Aceveda may be wavering, but at home we're thinking, Are you kidding? Mackey and Aceveda, archenemies, joining forces for good (and probably evil, too, knowing them)? What could be better?

No other cop show offers up quite as breathtaking a finale as "The Shield," and this sixth season is no exception: Mackey (Michael Chiklis) has done it again. Just when it looked like he'd be damned for all time, disgracefully dismissed from the Farmington police department without fanfare, he pulled off his best trick yet, stumbling on a "trunk full of leverage" pilfered from one of high-level wheeler and dealer Cruz Pezuela's (FJ Rio) men. Having recognized that blowing the lid off the San Marcos murders and playing Pezuela against his former ally Aceveda (Benito Martinez) was the only way to save his badge, Mackey spent the last few hours before he was supposed to appear in front of the review board gathering evidence and deciding on his best course.

Then Pezuela made a fatal error: He underestimated Mackey. Mackey was still aiming to back Aceveda into a corner when Pezuela told him, "Understand, you are nothing more than a fly on one of my many shits." We watched Mackey's face closely. If he exploded in a rage, that would mean he was still invested in working with Pezuela. Instead, swallowing hard, he sat down and said, in a choked voice, "I'm sorry if I offended you." Oh yeah. Pezuela is going down.

Which also meant, thrillingly enough, that Aceveda might end up as Mackey's high-level ally next season. But first things first: Tuesday night's finale featured so many brilliant twists and teeth-gritting turns and sweet touches, it's hard to even scratch the surface: Shane (Walton Goggins) strong-arming Mackey's wife, Corrine (Cathy Cahlin Ryan), and daughter out of an odd loyalty to Mackey (or to cover his own ass?), but finding himself in much deeper than he ever wanted to be with the Armenian mob; Claudette Wyms (CCH Pounder) once again on the outside of the action, thanks to her ethics, which prevent her from thriving in an inherently corrupt system; the end of Dutch's (Jay Karnes) long crush on Tina (Paula Garces) with Dutch and Sofer (Catherine Dent) realizing that they've both been flirting with silly young cops instead of noticing the sensitivity and sweetness of each other.

But then, a finale that's brimming over with poignant moments, suspense and unforeseen twists should come as no surprise, since the sixth season has been a thrill ride from start to finish. While younger shows like "Heroes" and "Lost" get all the attention, "The Shield" quietly churns out one rich, deeply engrossing, dynamic episode after another. If "The Wire" is repeatedly praised for transcending the cop-show genre with its sweeping literary ambitions, "The Shield" should be praised just as much for demonstrating how smart and transfixing a bread-and-butter procedural drama can be. By lifting elements of "Homicide: Life on the Streets," "NYPD Blue," "The Sopranos" and "The Wire," creator Shawn Ryan has crafted a mesmerizing, unforgettable tale that dares to reward longtime viewers by building six packed seasons of sly maneuvers, hairpin turns and ruthless manipulations on top of each other. That means that, going into its seventh and final season, the cumulative storytelling weight wielded by "The Shield" should feel like a medicine ball to the gut.

That said, while others have drawn parallels between Tony Soprano, who takes his final bow this Sunday night, and Vic Mackey, the two are very different flavors of depraved hero. As viewers, we're invited to scrutinize Tony's motives and feel conflicted over his behavior. Oddly, while Mackey may be both more brutal and more of a softie than Tony, he's also impossible not to cheer on. He plays on our pragmatism and our suspicion that only a brilliant, ruthless manipulator can solve the problems of the street. Try as we might to condemn his corrupt tactics, the brilliance of "The Shield" lies in its ability to pull us into Mackey's twisted logic, time after time.

The relatively green detective Hiatt (Alex O'Loughlin) was the latest pawn in Mackey's game, used to demonstrate just how badly things would go without a sharp, pragmatic, sometimes savage cop as the head of the Strike Team. Mackey has pretty convincingly demonstrated that the chaos of Farmington's crime problem can only be tamed through an odd mix of compromise and brute force, and Mackey is the only man for the job, half sneaky politico, half pit bull.

And then there's poor, mixed-up Shane, demonstrating that no one is better than Mackey at playing fast and loose on the streets. Nothing has been more arresting this season than witnessing Shane, in the days after being exiled by Mackey for brutally murdering their partner Lem (Kenny Johnson) at the end of last season, trying like hell and failing to play at Mackey's game. Shane at least figured out how to protect himself from Mackey by compiling all of the evidence on every illegal maneuver by Mackey and the Strike Team and giving Mackey a copy. Even so, Shane has always been a fickle and somewhat slow understudy. Even when he does come up with an unusually good play, he follows it up with a disastrous misstep, like telling Kesakhian's daughter Diro (Franka Potente) about the Armenian money train robbery, in which the Strike Team robbed the Armenian mob of millions of dollars. Mackey never would've revealed that information, knowing that the mob would avenge the crime, but Shane's desperation to gain Diro's trust got the best of him.

"We can't distance the ones we love from the choices we make," Diro chillingly tells Shane, explaining why she'll be going after Mackey's ex-wife and kids as revenge. Now Shane, who's Mackey's sworn enemy, finds himself in the odd position of wanting to protect Mackey's family without telling Mackey what a mess he has made with the Armenians.

Of course, anyone who has tried to take Mackey out has ended up paying dearly for it. Last season it was Kavanaugh (Forest Whitaker), obsessed with Mackey, but clearly destined to fail from the start. How many others came before him? It's a testament to the fine storytelling of "The Shield" that even though you know Mackey's going to come out on top, it's consistently satisfying to watch it all unfold.

The wrath of the Armenian mob, with Shane as their stooge, might be the worst thing to come at Mackey yet, but with Aceveda in his corner, there's no telling what kinds of nasty tricks and swagger Mackey will sport in the show's final season next year. Let's hope the writers don't get tempted to follow "The Sopranos" into a brutal downward spiral as this show wraps up. Darkness has always defined the (good) bad guys of "The Sopranos," but "The Shield's" story of (bad) good guys should end in a disturbing yet oddly satisfying amoral mire, right where Vic Mackey belongs.

Because if "The Wire" is a symphony and "The Sopranos" is a haunting blues refrain, then "The Shield" is a gangsta rap with a beat so infectious it makes you get up and dance in spite of its filthy lyrics. Surveying Mackey's shiny, bald head and his merciless grimace, we don't know why we love the bastard. All we know is that when he asks, "Are you ready for this?" the answer is unquestionably, "Hell yes!"