The Broadway season was surprisingly rich in idea-driven, civic-minded plays, but don't call it a rebirth of political theater. 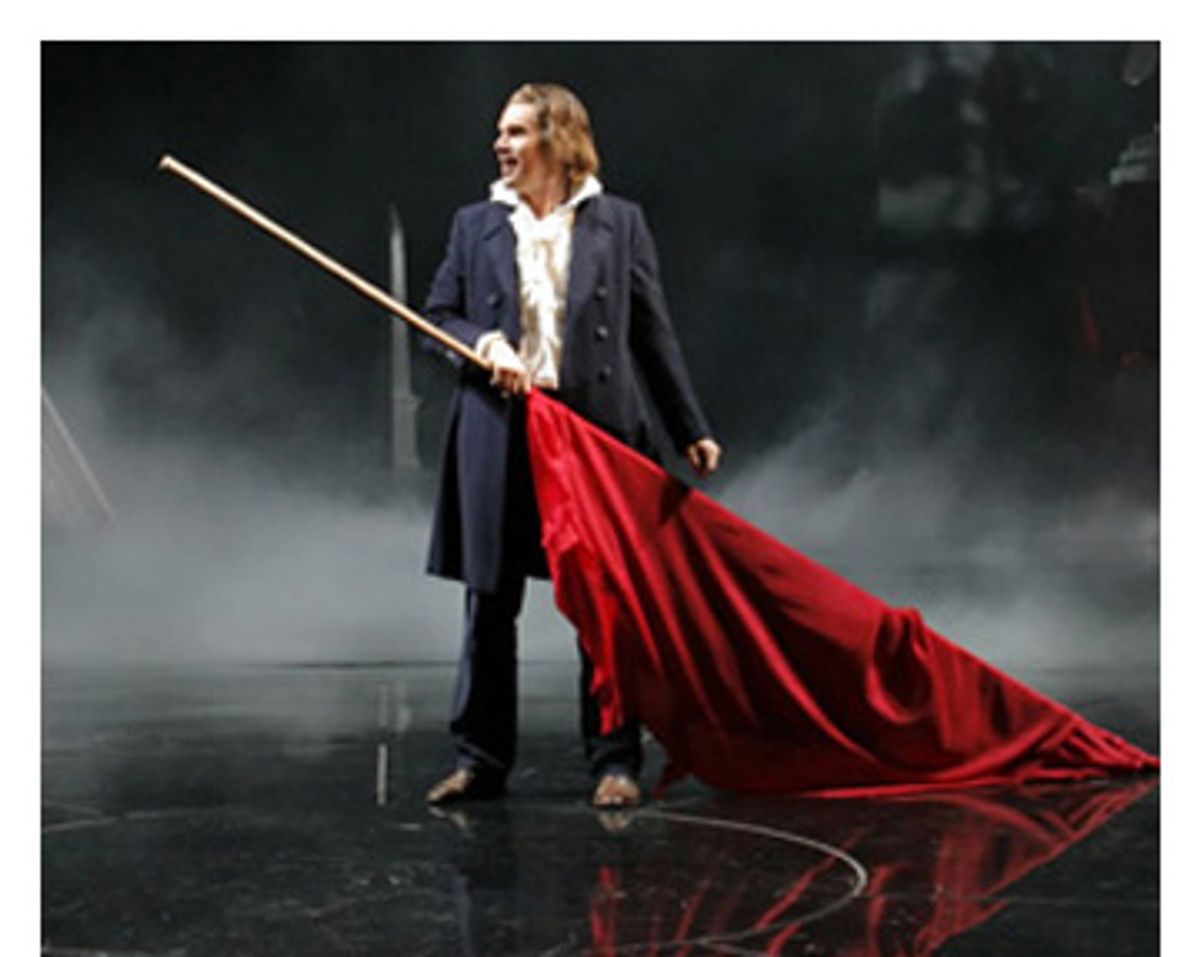 Political theater is thriving in America -- just not on our stages. Most weeknights, more than a million people tune in to Comedy Central for a satirical double act by those matinee idols Jon Stewart and Stephen Colbert. Their brand of headline-riffing humor may not have a long shelf life (my "Indecision 2004" DVD has grown dusty), but it acts as a comic purgative to a long day's news cycle. These fake-news shows also enjoy a pedigree of politicized vaudeville (Will Rogers, Lenny Bruce, "Saturday Night Live") and, given the crude theatricality of the current administration, seldom lack for material. "[Bush] is not a very good actor," Arthur Miller noted tartly after Sept. 11. Not for nothing has Washington been called a Hollywood for ugly people.

But what does that make Broadway -- Hollywood for the powerless? When it comes to actual theater -- you know, with tickets, ushers, curtains and the whole live performance thing -- it's harder to spot a tradition of biting political commentary. That's because America doesn't have one. At a time when every aspect of life has been polarized both right and left -- when buying a red T-shirt at the Gap is supposed to fight AIDS in Africa, and SUV drivers support the troops from their bumper magnets -- mainstream drama is still content to be expensive highbrow escapism. Anyway, how can producers expect people to pay $100 a ticket to be hectored for their complacency, when attending a play is already perceived as an elitist, blue-state activity?

At the same time, the 2006-07 season on Broadway was remarkable for showcasing a handful of topical works. The most-heralded new play of the season was Tom Stoppard's epic about Russian pre-Revolutionary intellectuals, "The Coast of Utopia," which ended its limited engagement in May after playing to mostly full houses and getting miles of column inches in New York newspaper arts sections. There's Beltway frisson over "Frost/Nixon," Peter Morgan's cinematic retelling of the historic 1977 David Frost interviews with Richard M. Nixon. The production, which transferred from London's Donmar Warehouse, has strong word-of-mouth over its stars, Michael Sheen and Frank Langella. Earlier this season, English dramatist David Hare's thoughtful wartime drama "The Vertical Hour" weathered mixed reviews on the strength of its Hollywood cast (Julianne Moore and Bill Nighy). Although "Vertical Hour" wasn't quite the hit its producers envisioned (tickets were easy to score in the final weeks), the production earned back its $2.6 million investment.

The late August Wilson's "Radio Golf," a bittersweet study of the black bourgeoisie and its problematic relationship to African-American history, is hanging in with roughly 60 percent weekly attendance, but long-term ticket sales are lean. The play has earned respectful notices and has been drawing refreshingly diverse crowds, but it's unclear whether audiences will warm to its faintly retrograde dichotomy: black heritage vs. assimilation. At the same time, you have to be excited by Wilson's frank, profane, lyrical discussion of racial issues on a Broadway stage, when the Great White Way remains overwhelmingly, yes, white.

Several of the season's political works started life in Britain, which has a state-subsidized tradition of civic-minded dramatists that connects the history plays of Shakespeare to Shaw's drawing-room dialectics, Harold Pinter, Edward Bond, David Hare, Howard Barker and, recently, the edgy, issue-oriented dramas of Joe Penhall and Mark Ravenhill. Tom Stoppard, a postmodern pasticheur with a Shavian gift for rhetoric, is not usually listed in their company. His whimsical, nimble constructions ("Arcadia" and "The Invention of Love") toy with ideas rather than use them as weapons against the status quo. Stoppard also locates himself right of center: "I am a conservative in politics, literature, education and theater," he has said. This usually translates into a profound skepticism of idealists and moral relativists' grafting philosophy onto the chaotic messiness of life. An unapologetic Thatcherite, Stoppard is wary of abstract, totalizing theories in the public sphere. Hence the sardonic title "The Coast of Utopia," which is the only concise thing about the work.

The eight-and-a-half-hour trilogy centers on exiled Russian political theorist Alexander Herzen, who supported anti-czarist revolutionary ideals in the 1830s but grew disillusioned after the violence and failures of the 1848 revolutions throughout Europe. Over 35 years, we follow Herzen and his circle of friends, lovers and rivals from Moscow to exile in Paris, London and Italy. Our ideologically tormented hero suffers personal tragedy, his political philosophy acquires a darker, tragic hue and he watches Russia end serfdom and start down the bloody path to Westernization.

This bookish and tediously episodic behemoth isn't wholly successful as theater (it's better read and/or visualized as a BBC miniseries). The characters tend to blend into one another and the playwright seems more interested in juggling philosophies than crafting characters. But for all its repetitiveness, structural bloat and unwieldiness, "The Coast of Utopia" was a signal theatrical event in a town that is generally starved for idea plays. Scholars, historians and journalists flocked to hear Billy Crudup, as the Slavophile literary critic Vissarion Belinsky, denouncing literary thralldom to Western models; they raptly watched Ethan Hawke's anarchist firebrand Michael Bakunin swagger about, advocating violence for its own sake. For a brief time, theatergoing seemed like a plausible pastime for New York's intelligentsia. Stoppard both honored the passion of his obscure subjects yet ironically underscored the fact that they lay the groundwork for Stalin.

What does Stoppard's trilogy have to say about the Iraq war, American imperialism or the struggle against radical Islamists? He'd be the first to eschew utility in art. "I'm not impressed by art because it's political," he has said in "Tom Stoppard in Conversation." "The plain truth is that if you are angered or disgusted by a particular injustice or immorality, and you want to do something about it, now, at once, then you can hardly do worse than write a play about it."

If "The Coast of Utopia" was fascinated with ideas on the page but dubious about their application in the world, David Hare's "The Vertical Hour" was precisely the reverse. Hare always strives to connect the personal and the political and to limn the ways that ideologies corrupt or purify our lives. "The Vertical Hour" centers on a power struggle between Nadia Blye (Julianne Moore), a foreign war correspondent turned Yale professor and a staunch defender of the Iraq war, and Oliver Lucas (Bill Nighy), her prospective father-in-law, an English doctor living in the Welsh countryside with a guilty past. Oliver is a sardonic critic of the American invasion in Iraq. When asked why, he quips, "Let's just say, I knew who the surgeon was going to be, so I had a fair idea of what the operation would look like." Over the course of an early-morning scene that mixes seduction, confession and debate, Nadia and Oliver discuss love, Iraq, freedom and how to act in the world without doing harm. For a theatergoer used to musical fluff or hoary revivals, "The Vertical Hour" was refreshing: People on a Broadway stage talking openly and intelligently about the Iraq war.

"The Vertical Hour" was red-meat political theater (as was Hare's "Stuff Happens," an engrossing docudrama about the run-up to the Iraq war, which opened in April at the Public Theater). By contrast, "Frost/Nixon" is about the manufacturing of political theater, rather than the thing itself. Peter Morgan, screenwriter for movies like "The Queen" and "The Last King of Scotland," knows that his audience wants to see powerful public figures dragged down. He just doesn't investigate the issues beyond psychological motivation. It's all personality-driven bread and circuses to Morgan, who fudges the facts about the Frost interviews to ratchet up the excitement. The key "confession" that Nixon gives toward the end of the interviews was actually considered and prepared the day before. "Frost/Nixon" will make a fine movie when Ron Howard films it next year. As for digging into the details of media manipulation or presidential ethics, Morgan goes no further than breathless vagaries. "It was tough to tell where the politics stopped and the showbiz started," one of his tedious narrators informs us. Lacking any core values or theories, movie-ish docu-riffs such as "Frost/Nixon" benefit greatly from that blurred line.

Can you blame Morgan, though? No one goes to the theater to be bombarded with policy wonkery or historical facts. Political theater isn't glamorous, it isn't sexy, and critics generally roll their eyes when a playwright holds forth on public policy. Nonprofit theaters aren't taking the lead either, commissioning Tony Kushner to write a homegrown "Coast of Utopia," or asking Neil LaBute to nail the pathologies of white Republican men in power.

The future of political plays belongs to the next generation. How will they respond to the historic criminality of the Bush administration, its grotesque exploitation of 9/11, its deadly mishandling of the war in Iraq and efforts to boost executive powers to fascistic levels?

It's a commonplace in foreign-policy circles to say that Bush squandered international goodwill after the terrorist attacks. But the dissipation charge seems also applicable to American theater. Here we are, six years after 9/11, four years after the invasion of Iraq, and what do we have to show for it? There have been a handful of paranoia-tinged plays (Bruce Norris' "The Pain and the Itch," Adam Bock's "The Thugs"), a prescient one by Tony Kushner ("Homebody/Kabul") and a clunky, ripped-from-the-headlines burlesque by Tim Robbins ("Embedded"), but it feels as if our playwrights and producers are missing their historical moment. Over in England, the Tricycle Theatre is presenting "Called to Account: The Indictment of Anthony Charles Lynton Blair for the Crime of Aggression Against Iraq -- a Hearing," a mock trial of Blair, through June 9. It's hard to imagine a Broadway bigwig or a nonprofit venue with the confidence to mount a similar offense against Bush.

Die-hard practitioners still believe that rhetorical and mimetic power of theater can instruct, shame and ignite debate. In January 2005, Edward Albee addressed the issue on a Drama Desk panel. "All theater is political if it engages you," said the "Who's Afraid of Virginia Woolf" author. "If more people took theater seriously (and were given serious, engaging theater) we'd have different election results."

But no one really expects theater to change the world. A tourist from Ohio who voted Republican in 2004 won't turn blue-state after watching a Broadway play. Most of us would be happy if theater were simply relevant. Perhaps if the world keeps getting worse, the plays might get better. In January, David Mamet will premiere the presidential satire "November" on Broadway. And recall that our last major work of political theater, Kushner's "Angels in America," was written roughly a decade after the fictional events it describes. Perhaps, come 2012, we'll see a generation of galvanized, morally adventurous dramatists working on a broad social canvas.

Until then, crack open a beer and let Jon Stewart make you laugh.

David Cote is a critic and theater editor of Time Out New York.