There's a great movie to be made of the highly melodramatic life of Edith Piaf. Is this it? 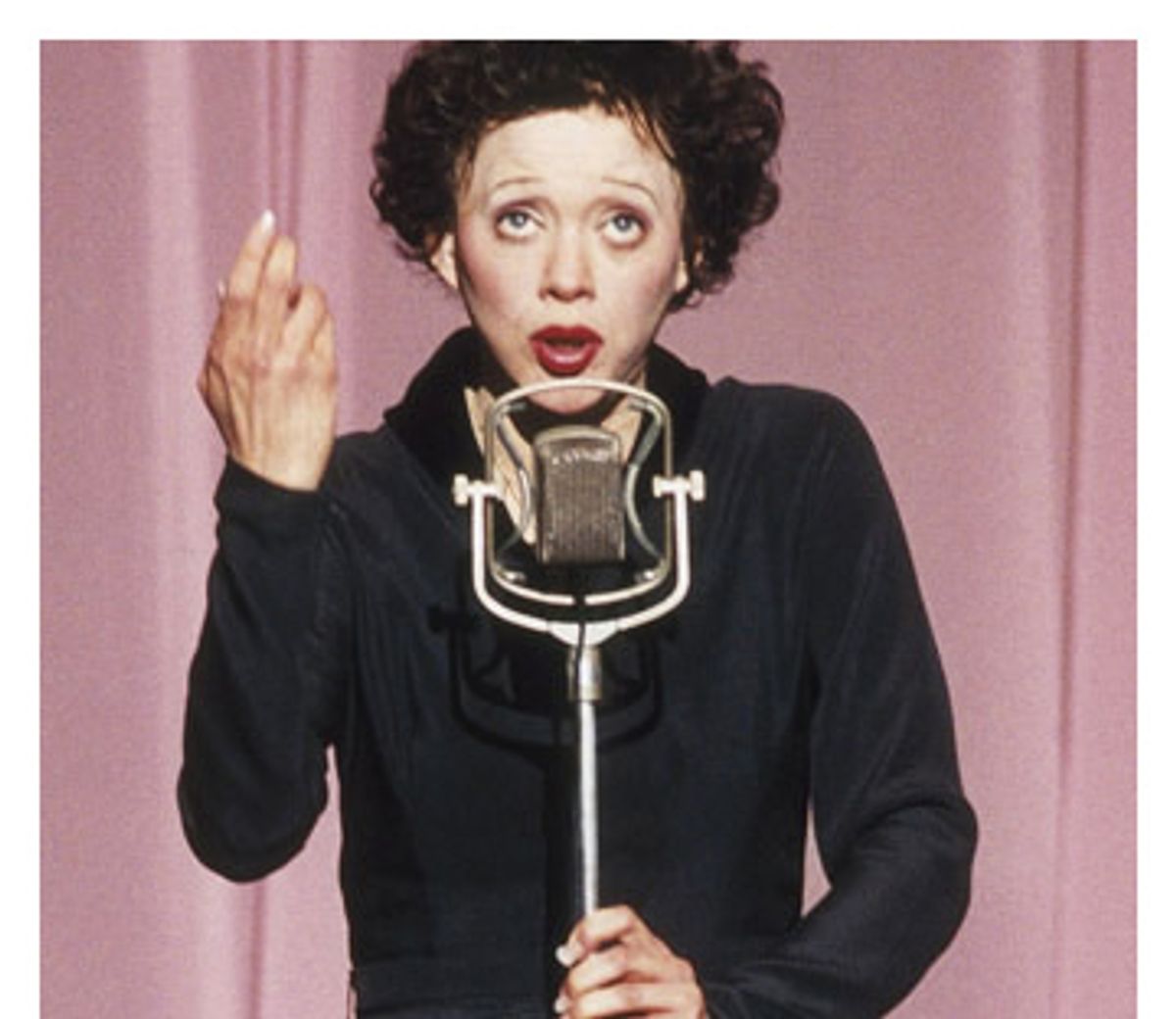 The story of Edith Piaf's life -- beginning with her early childhood in Paris' working-class district of Belleville, as the daughter of a street-acrobat father who was often on the road and an inattentive mother who was struggling to make a career as a singer -- is so suffused with tragedy that it seems made for melodrama. Piaf was born Edith Gassion in 1915. As a young girl, she became part of her father's act, singing for coins as he did contortions and backflips on the street. She struck out on her own at 15, performing on the street as her friend, Mômone, passed the hat. Louis Leplée, the Parisian cabaret director who plucked Piaf off the streets, gave her the nickname La Môme Piaf -- "The Sparrow Kid" or "Little Sparrow" -- which may have seemed like a career-making gimmick at the time but which actually presaged how beloved this weirdly fragile but earthy performer would soon become.

Olivier Dahan's intentionally fractured biopic "La Vie en Rose" (the picture's title in France, where it has been a huge hit, is "La Môme") has all the makings of showbiz melodrama: childhood blindness, doomed love affairs, the death of a child, serious car accidents, onstage collapses and drug addiction. (Piaf died in 1963, a 47-year-old woman in a prematurely stooped and withered shell.) Piaf is played here by the young French actress Marion Cotillard, who has been wonderful in pictures like Jean-Pierre Jeunet's "A Very Long Engagement" and Ridley Scott's "A Good Year"; this is the sort of carefully controlled, earnest performance that draws adulation, and you can't say Cotillard doesn't earn it.

But Dahan's filmmaking damn near sabotages the performance. Dahan understands that Piaf's life is the stuff of melodrama, but instead of just setting it all up there on the screen, plain old Hollywood-style, he has to chop it up and reconstitute it -- as if Piaf's life story, so elemental in both its triumphs and its sadness, needed to be dressed up by technique. His approach draws more attention to the filmmaking than it does to the life. Dahan seems to believe that chronology is bourgeois: Pure storytelling is all fine and dandy, but he wants us to know he's making art.

Some individual scenes are lovely: When we see young Edith after she's broken away from her father, on the street with Mômone (played, with a kind of careworn effervescence, by Sylvie Testud), Dahan and cinematographer Tetsuo Nagata give us a sense of the duo's ragged determination, and of both the dangers and the pleasures of literally having to sing for your supper. The picture has a nicely burnished look, showing us various bits of Paris, sometimes dazzling and sometimes grimy. And the sections during Piaf's triumphant initial visit to New York are set against the kind of glittering city backdrop we remember from movies of the '30s and '40s. Gerard Depardieu appears, all too briefly, as Leplée, a benevolent but no-nonsense papa bear.

But the picture's best, most relaxed scenes are the ones between Cotillard and Jean-Pierre Martins as Piaf's great love, the boxing champ Marcel Cerdan. Displaced Parisians in New York, Piaf and Cerdan share hearty sandwiches (which Cerdan loves and Piaf cannot stomach) at a night-glow lunch counter straight out of Edward Hopper. And in the most moving and devastating scene -- one that's staged beautifully and delicately, especially given the clumsiness of the movie surrounding it -- Piaf waits for Cerdan in her Manhattan hotel, not knowing he's been killed in a plane crash. Dahan makes us feel the weight of the minutes: It's as if he's clamped us in those invisible leg-irons that in our dreams sometimes keep us from outrunning some scary, unseen foe. It's the one point in "La Vie en Rose" where pure emotion storms the floodgates of Dahan's technique.

Mostly, though, "La Vie en Rose" -- whose script was written by Dahan and Isabelle Sobelman -- fills in the details of Piaf's life with dots that are either way too heavy or way too faint. Mômone, who was Piaf's lifelong friend, drifts out of the picture (the two have had a falling out) and then reappears without explanation. She's also seen wearing a man's suit, not-so-subtle shorthand for you-know-what, and the obviousness of it is unintentionally comical. What's more, we'd barely know World War II even happened during Piaf's lifetime -- the picture tells us nothing, not even glancingly, of where Piaf was or what she did during the Occupation.

"La Vie en Rose" does give a sense of Piaf's masochistic charisma as a performer, and of what a fascinating, odd little creature she must have been in real life. Piaf's bestowed nickname suited her perfectly: Her voice had the rippling sweetness of something borne on the air, but there was nothing dreamy about it -- it felt very much of the physical world. Here, Cotillard copies Piaf's puppetlike mannerisms, her easy, bucktoothed smile, with eerie accuracy. This is the kind of biopic performance people often laud because they see how closely it mirrors the reality of its subject. But this is a good performance in spite of Cotillard's exacting mimicry: Any good actor can imitate tics and mannerisms, but Cotillard has so much life in her that the spirit of Piaf shines through the exaggerated, shrugging gestures and cartoonishly tweaked eyebrows. Cotillard makes the necessary leap between mere impersonation and a bracingly sympathetic rendering of one woman's suffering, as well as her occasional joys.

But Dahan can't just let the performance alone, allow it to breathe. The picture he's made may be sympathetic to its subject, at least as sympathetic as a headlock can be. Dahan's approach is the exact opposite of the one filmmaker George Hickenlooper took in his recent and unfairly maligned "Factory Girl," about Warhol muse Edie Sedgwick, a picture that seemed a bit problematic when I first saw it but whose memory has stuck with me in the past few months: In that picture, Sienna Miller's Edie is a vibrant, living presence, not a resuscitated legend. But Dahan doesn't allow Cotillard that kind of freedom: At the movie's most deeply emotional moments, his camera zooms in on her, magnifying her studied tics and mannerisms in a way that, through no fault of Cotillard's, makes them seem false.

Dahan seems to want to engrave Piaf's pain right into the grain of the film -- but why? A lighter touch wouldn't have diminished Piaf's story in any way; in fact, the picture would probably be far more intense if it were more understated. There's a great movie waiting to be made of the life of Edith Piaf. After two hours of "La Vie en Rose," je regrette the whole thing.