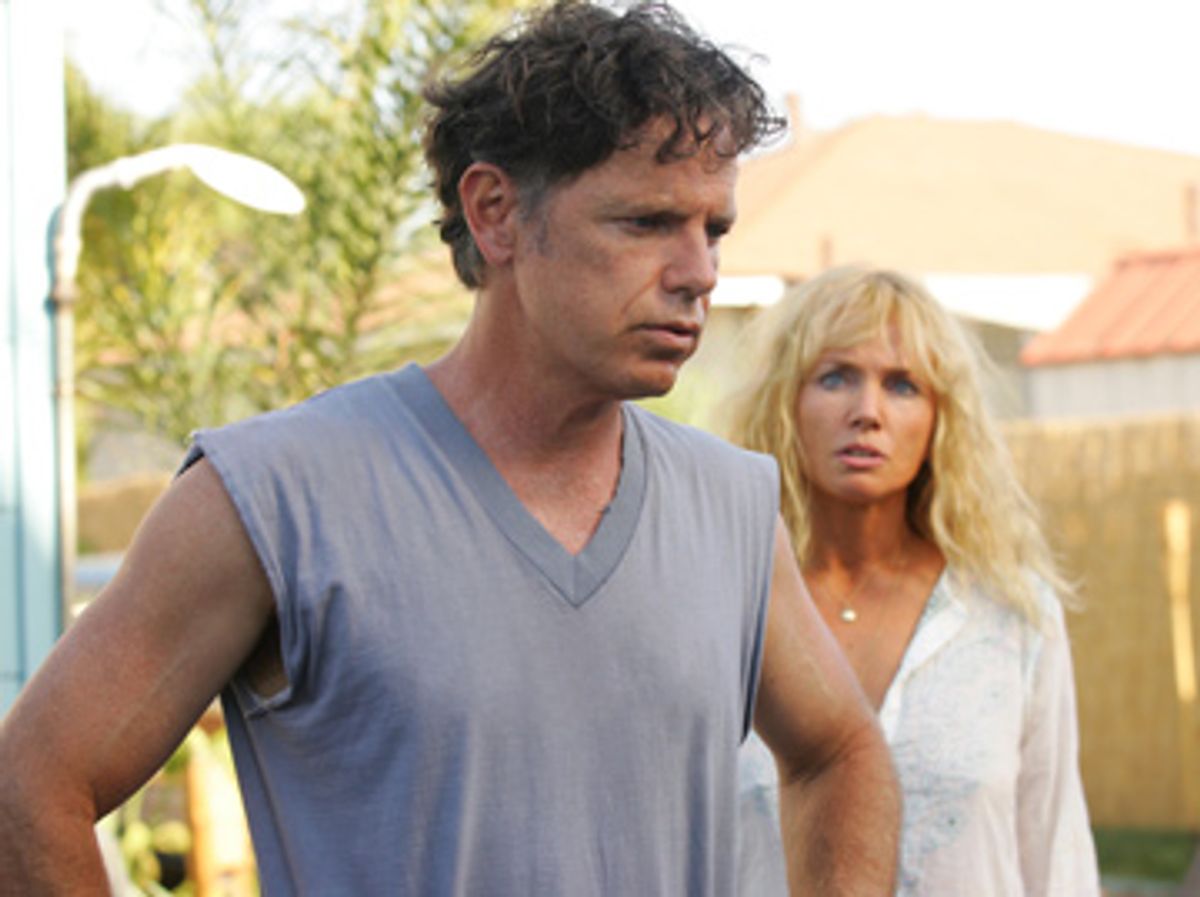 Nothing short of a miracle could breathe new hope into the kinds of outcasts, failures and delinquents that "Deadwood" creator David Milch favors, so what did he do? He populated his new drama, "John From Cincinnati," with loads of crusty old coots and hopeless losers, threw in a hefty helping of unexplained phenomena and divine interventions, and then sat back and enjoyed the resulting chaos.

Not content to tell simple stories, Milch prefers complicated microcosms: small communities of characters who, despite their hardened exteriors and rude demeanors, still nurture undying hopes and sweet, stubborn affections. From "Hill Street Blues" to "NYPD Blue," Milch has shown a knack for whipping up the sorts of bitter clashes and unlikely alliances that slowly but surely take on a life of their own. Just as he guided the forces of "Deadwood" to an electric state of expectancy, spurred on by a whole town full of thwarted dreams and secret longings and festering injuries, so does he bring his eccentric touch and sympathetic eye to Imperial Beach, a sleepy California beach town on the Mexican border.

In collaboration with surf novelist Kem Nunn, Milch tells the story of Mitch Yost (Bruce Greenwood), a former surfing legend who's been angry at the world ever since he suffered a career-ending knee injury. But then, most of the characters in HBO's "John From Cincinnati" (premieres at 10 p.m. on Sunday, June 10) are full of blame: Mitch blames the commercialization of surfing and the promoters who poison those waters, but he also blames his wife and his junkie son and anyone else within spitting distance. Mitch's wife, Cissy (Rebecca De Mornay), seems to wear years of disappointment on her face, perfectly embodying the former California beauty whose life has somehow swerved off-course unexpectedly, forcing her to lower her expectations. Their son, Butchie (Brian Van Holt), is a heroin addict who's effortlessly charming but tremendously selfish, leaving his son, Shaun, in his parents' hands while he wiles away his days at a ramshackle hotel by the sea, shooting up. Shaun (Greyson Fletcher) shows all of the Yost surfing talent with none of the smoldering anger and regrets, but Mitch worries that the surfing circuit will spoil Shaun's innocence and rob him of his ability to enjoy his gift.

Naturally, the Yost family is just the tip of the irascible iceberg, surrounded by a surly assortment of misfits, from Bill (Ed O'Neill), a former cop who's aged into a lonely, housebound bird lover that no one seems to take seriously, to Barry (Matt Winston), a nerdy, emotionally unstable lottery winner who was bullied by Butchie back in school. "Deadwood" fans will recognize Jim Beaver (who played Ellsworth) as Joe, a Vietnam vet who's been reduced to peddling live sex shows, and Garret Dillahunt (who played Francis Wolcott) as a local doctor. On top of that, there's Dayton Callie (who played Charlie Utter) as Butchie's longtime dealer, a guy who, despite his violent outbursts and brutal tactics, seems to see himself as Butchie's guardian angel. Yes, leave it to David Milch to lean into the inherent contradictions of a heroin dealer with relentless protective urges toward his junkie client.

Onto this emotionally scorched landscape enters John, a simpleton with supernatural powers. John informs anyone who'll listen that "The end is near," but otherwise seems to repeat what other people say, mimicking their tone and gestures. Around the time of John's arrival, strange and miraculous events transpire, events that we hope are powerful enough to cheer up this petulant crowd. John doesn't seem clued in to any of it, though, telling us "Some things I know and some things I don't."

Which seems to be the point, as far as Milch is concerned. When asked by late-night host Craig Ferguson what "John From Cincinnati" was about, Milch told him, "If God were trying to reach out to us, and if he felt a certain urgency about it? That's what it's about."

Even though it was clear Ferguson had limited time and was looking for quick, witty answers, Milch couldn't stop there: "The wave -- which I'm told is what surfers ride -- is the only visible embodiment of what physicists tell us all matter is composed of, which is particles held together by some kind of magnetic or molecular force, and that's what makes the waves move. And if God were trying to reach out to us, and teach us something about the deepest nature of man, he might use some drugged-out surfers."

Let's see: The apocalypse, bitter old curmudgeons, Jesus as a confused dimwit, wave-particle duality? Sounds like HBO's got a real hit on its hands this time! To make matters worse, it's the die-hard fans of HBO's offerings who are going to struggle the most with Milch's latest. Despite the conviction and confidence behind it, the first hour of "John From Cincinnati" may not charm an audience flailing in what's sure to be the devastating emotional wake of the final episode of "The Sopranos." On top of that, angry "Deadwood" devotees will -- and should -- continue to be enraged that Milch's brilliant western has been taken out back and shot so that its creator might redirect his energies elsewhere. (Some have reported that the promised final four-hour chapter of "Deadwood" will begin production after "John From Cincinnati" wraps, but when Ferguson asked about it, Milch merely replied, "One hopes, but it's sort of a fluid situation over there [at HBO] right now.")

Despite the countless magnetic or molecular forces working against it, "John From Cincinnati" looks as auspicious as a promising swell on the horizon. Like a good philosopher or novelist, Milch digs into the complications, the contradictions and the layers of meaning that other TV writers would naturally shy away from, dredging up gems from every passing encounter. When Bill discovers that one of his birds has died, he tells a distraught Shaun, "It's all right. This happens. This is something you learn to accept," but all the while he's struggling to hide his tears so that the kid can't see his utter devastation at having lost his pet. This is Milch's Midas touch: He knows how to get us rooting for odd characters, how to make them lovable, how to make us see their potential and want big things for them.

This heady mix of emotional provocation and meaning are what make Milch's work feel so rewarding. Over the course of just the first three episodes, his strange assortment of characters seems to embody a minute-by-minute interplay of naiveté and world-weariness, a struggle between hope and discouragement. In the lurking opportunism of surf promoter Linc (Luke Perry) or the lonely instability of lottery-winner Barry, the tension of Milch's dark vision is palpable: Optimism and opportunity are always shadowed by corruption, greed and self-destruction, punctuated by the universe's random (or perfectly planned and mathematically precise?) acts of violence and redemption.

All of which may sound hopelessly ambitious. Certainly to skeptics and those who want to be entertained by predictable stories with clear heroes and villains, "John From Cincinnati" will look like an unforgivable morass of non sequiturs, cussing, spitty outbursts and unexplained acts of God. But to those enamored of hardened characters who nurture childish dreams and hopeless cases who give selflessly when no one's looking, for those who thrill to find themselves in an unfamiliar setting, in the midst of a dysfunctional family being prodded to find new ways to survive and relate to each other, "John From Cincinnati" will feel like a big, sloppily wrapped gift from heaven itself.